I have somewhat of a torrid love affair going on this season with the classic pork and apple flavor combination.  Sure, it’s been around forever, but for whatever reason, something about the sudden chill in this year’s air has got me thinking in one direction.  (Hint: it’s a direction that involves an entire apple grove and pig farm.)  By the way, when I say “it’s been around forever”, I really mean forever.  Or at least dating back to the 1300’s.  I’m a little late to the game, apparently.

But despite centuries’ worth of pork and apple recipes, I have never in my life had apple butter ribs.  Or had never, I should say, because obviously once I realized that I’d never tried them, I was dead set on making them.  I should also mention that I had never tried apple butter in the first place, but, I mean, it’s called apple butter.  There was absolutely no chance that I wouldn’t like it. 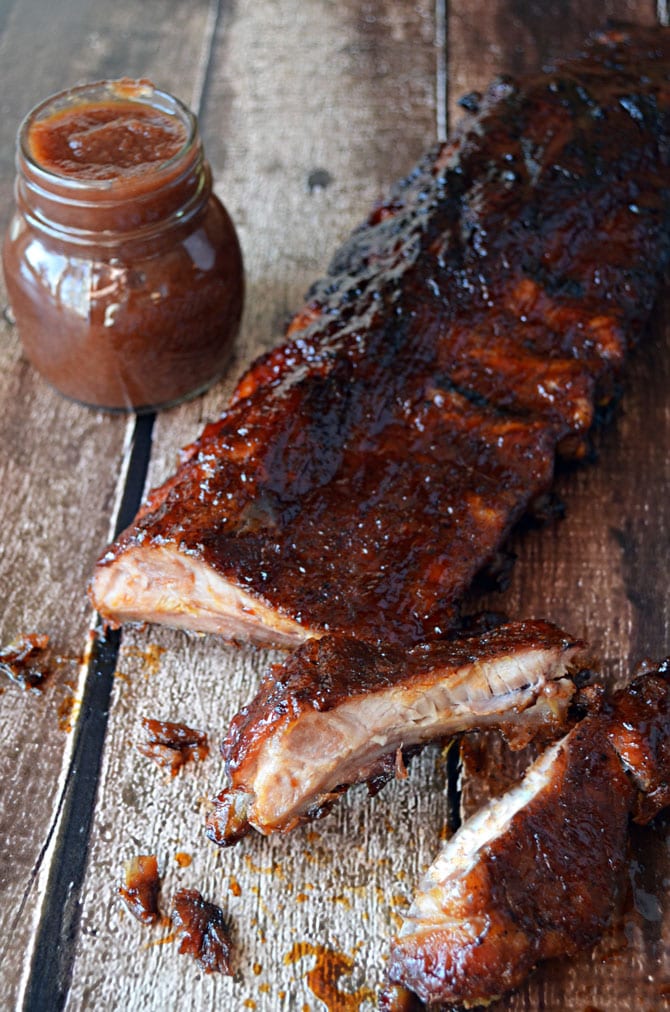 Instead of going out and buying apple butter, I decided that I’d make it myself since I just so happened to have 10 pounds of apples laying around from when I went apple picking with James.

Speaking of which, why is it that every couple who has an apple grove within a fifty mile radius of them feels the need to go apple picking in the fall?  As someone who did go do this, I have to say that I don’t know.  I really don’t.  I think it’s some kind of unwritten rule to do something in the fall that is supposed to be fun and cute, and couples can wear flannels and take pictures and do some little romcom-worthy things and giggle together, or whatever.  But apple picking really isn’t that much fun,  as I began to realize after ten minutes or so at the grove.  You get there, and you pick the apples, and then you think, “Now what?  Are we supposed to take pictures with the apples?  Should we laugh as we pick an apple?  I can try to use my other hand to snap a picture of both of us on my phone but the sun is glaring and I can’t open my eyes that wide and I keep cutting him out of the picture…”

Anyway, I generally don’t get it.  If you know the secret of apple picking appeal, let me know.  I will say, however, that the apple picking with James did turn out to be a lot of fun in the end.  This was largely because James unveiled that he is an apple-picking-expert and was able to scope out the best apples, climbing trees to get them if necessary, and testing all of our apples to see if they were perfect.  It was really entertaining and I was oddly pumped about James’ apple picking abilities for absolutely no logical reason.  Also, we got apple cider and apple cider doughnuts afterwards, which was by far the best part.  Also, I had ten pounds of apples to make these ribs with.  Aaaand there’s my chance to get back on topic, so I think I’d better take it.

So, as I was saying before, I made apple butter with the many apples I had leftover, using this Slow Cooker Apple Butter Recipe from My Baking Addiction.  It turned out perfectly and was extremely easy to make overnight.  The next morning, I couldn’t get started on the ribs quick enough.  The smell of the apple butter throughout the house was like ten shots of espresso pumping through my veins.  I was fumbling over myself to get them in the oven as fast as humanly possible so I could just eat the ribs in all of their glorious, apple-buttery goodness. 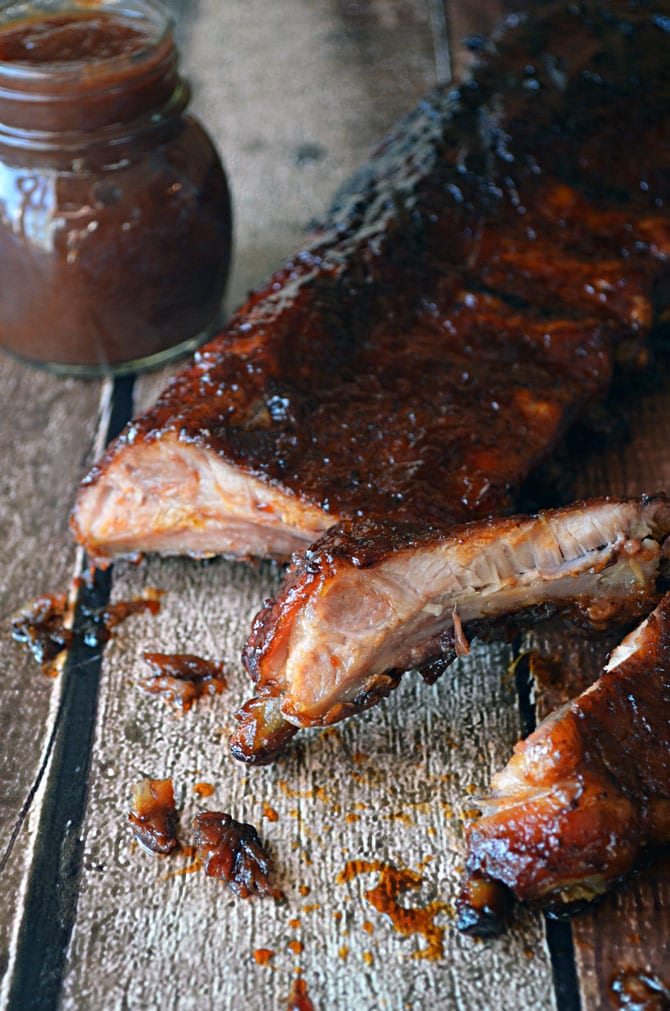 Although I’ve gotten extremely off-track several times throughout this post, the point of it really is to tell you this: the ribs were, in fact, glorious and full of apple-buttery goodness.  These are great for parties, they’re great for tailgates, they’re great for dinner, they’re great for anytime, and they’re sure to impress.  When I made them, James and our friend Brandon came to visit, and Brandon could not stop talking about how he needed the recipe because they were some of the best ribs he’s ever had.  James loved them, too, and kept singing their praises.  How could anyone not love them, with spicy BBQ flavors mingling with the sweetness of the apple butter, apple cider, cinnamon, and brown sugar, all glazed over succulent ribs?  I surely don’t know.

Sweet and spicy fall flavors come together in these delicious Apple Butter BBQ Ribs. Whether you make them for game day, a party, or for dinner, they’re sure to be a hit this season.