Bacon-Wrapped Figs with Blue Cheese and Bourbon Caramel. This impressive appetizer recipe has the perfect balance of sweet, salty, and tangy flavors, and only requires 6 ingredients.

This recipe for Bacon-Wrapped Figs with Blue Cheese and Bourbon Caramel was also featured on Serious Eats. 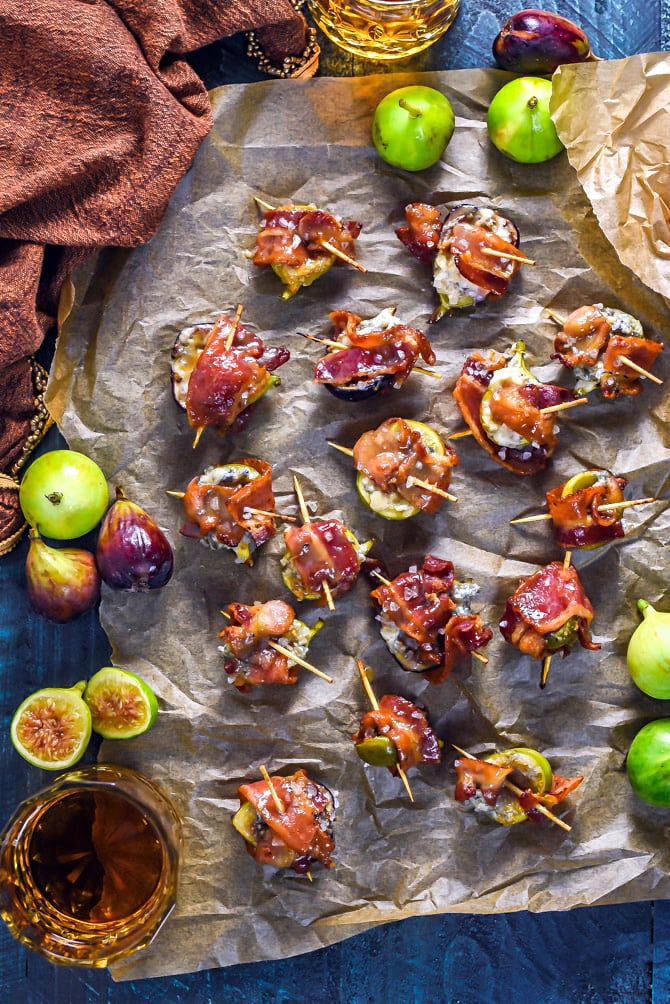 I’m not a superstitious person, nor am I someone who takes much stock in hidden messages or so-called signs from the universe. But if there ever was a time that I could be convinced that the universe was at all strangely concerned with what I put up here on the blog, it would be this week, and about these figs. 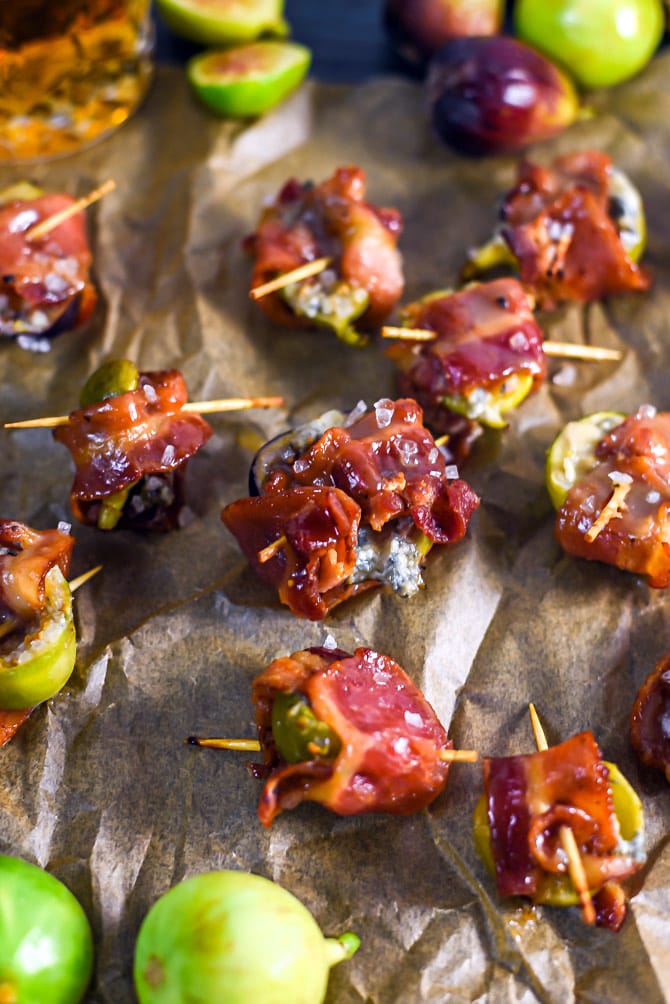 Speaking of this week, I’ve spent the past 7 days frantically transferring files from my work laptop to a backup because I desperately need to send my computer out for repairs.

Aside from the fact that a dozen letters on my keyboard have stopped working, my computer will now only turn on if the charging cord is positioned just so, and just so has gotten increasingly impossible to find. Sometimes the screen turns black out of nowhere. Occasionally the computer makes an awful grinding sound. A few times it has even smelled like burning plastic. (And yes, I did once melt a laptop by setting it down on a still-warm stove while I was taking notes for work, but that was years ago. This is a whole different computer.)

The point is, I’ve been preparing to send it off to be fixed. 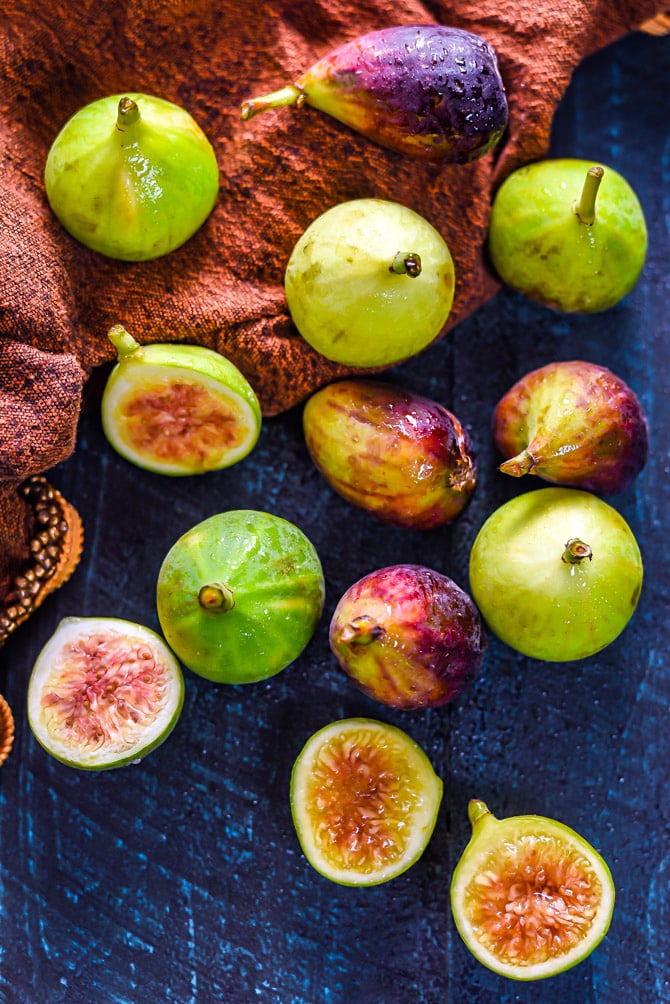 The interesting thing, though is that this computer is broken in a billion ways but it doesn’t ever freeze. Except for one time, yesterday, as I transferred the last of my photos. I noticed that my laptop froze while synching one of the last files: a picture of Bacon-Wrapped Figs with Blue Cheese and Bourbon Caramel. 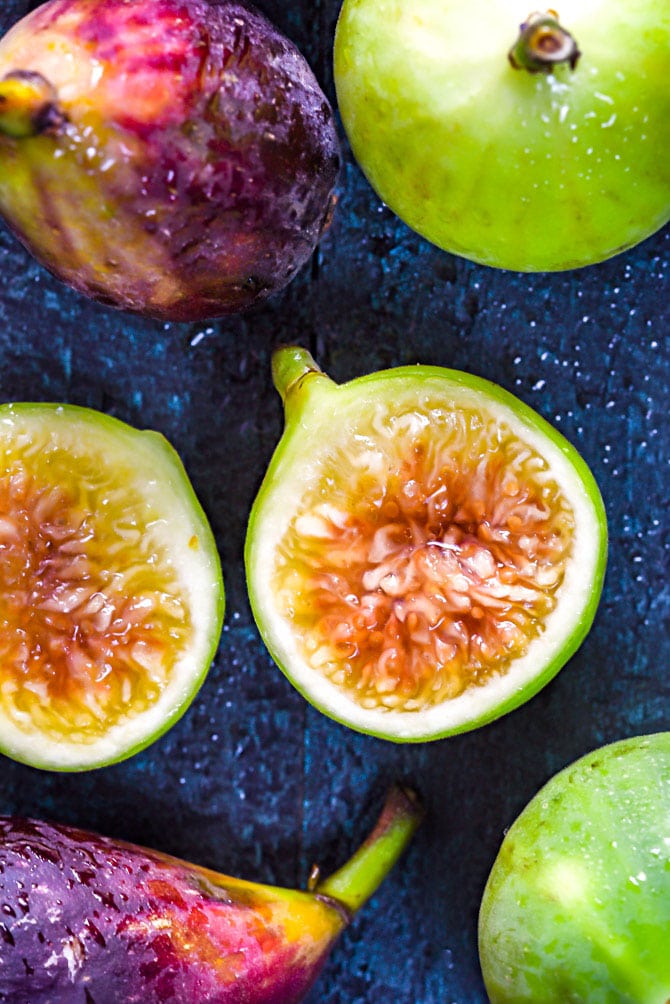 Let me just pause from the story for a second to say: THOSE FIGS! Sweet and tender; stuffed full of creamy blue cheese and surrounded by crisp, smoky bacon; all slathered in a homemade caramel spiked with bourbon… they’re truly and honestly perfect. They’re one of my favorite hors d’ouerves that I’ve shared here. Except I never wound up sharing them here. But more on that in a minute. 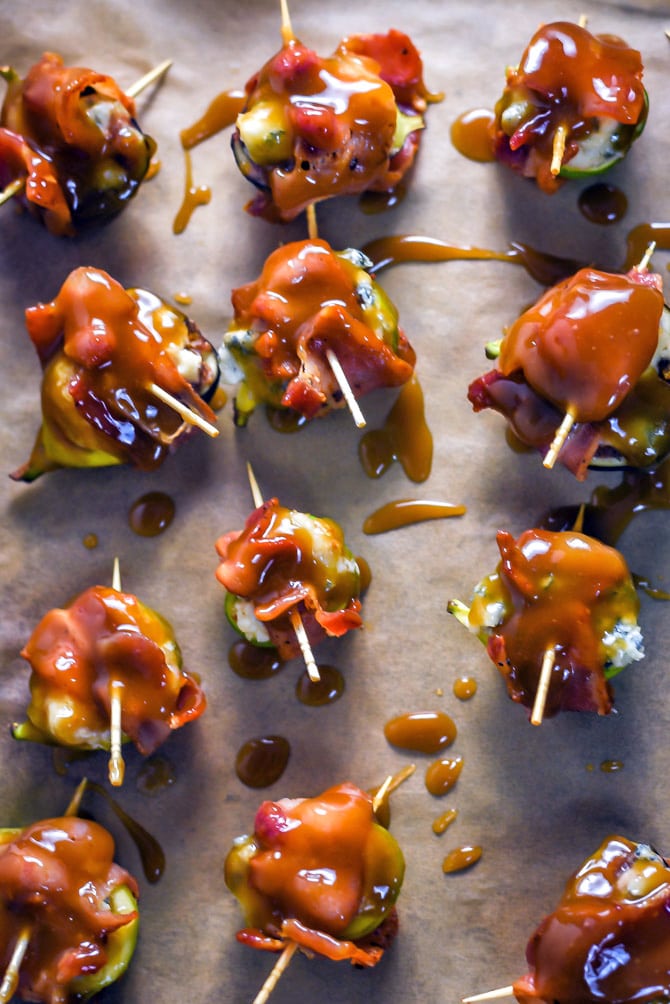 I first made these figs a year ago at the very, very end of fig season for a party I was hosting. I’d had bacon-wrapped dates before (many times, and loved them very much) and I thought I’d try switching it up with ripe figs. Their floral, fruity flavor would make for a fantastic twist on the classic. And then I started thinking, since we were going for sweet and salty, why not crank it up a notch by candying the bacon– or even better, making a simple caramel sauce out of butter, brown sugar, and bourbon to brush over the bacon and give it even more sweetness and depth?

That, my friends, was the best idea. Not to pat myself on the back too much or anything, but I can’t help it. Bourbon caramel and figs and bacon are a match made in heaven.

And then, in the spirit of extravagance, I decided the last step to making these figs a true show stopper would be to stuff them with tangy and sharp blue cheese. I know not everyone out there is a big fan of blue cheese– and if you’re not, that’s okay. I mean, I’m surprised I’ve kept your attention this long if that’s the case, but I welcome it. You can use goat cheese, cream cheese, or brie instead. But for my fellow blue-cheese lovers, load it up, my friends.

For what it’s worth, a bunch of blue-cheese haters devoured them. All together, it just works. And you only need SIX ingredients. It’s great when you can get fancy with an easy recipe, isn’t it? 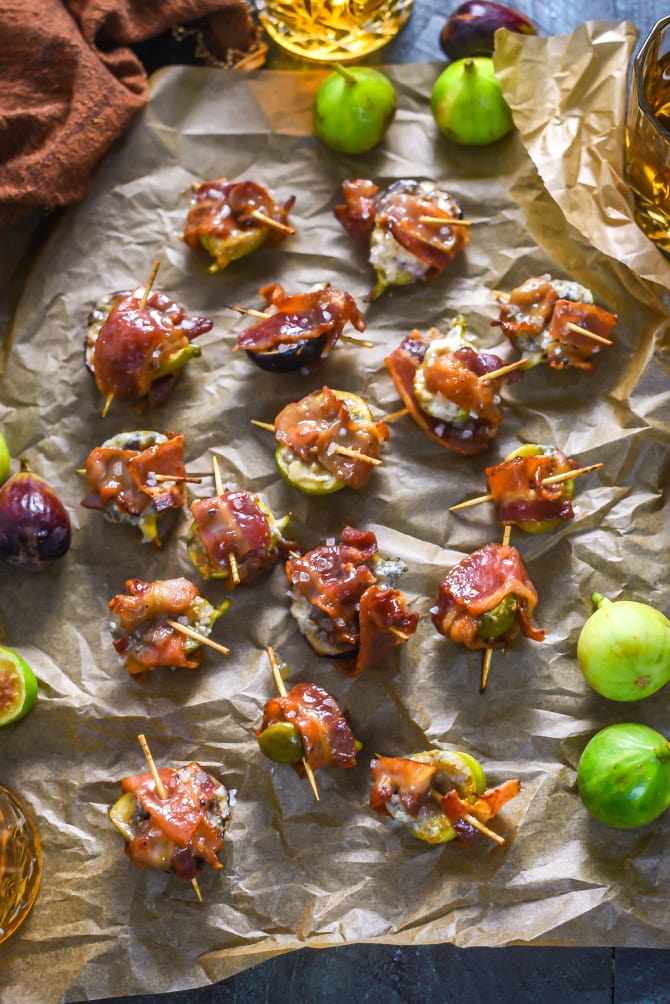 I wanted to post these immediately but decided it’d be best to wait until the next time figs were in season, which is now. I just forgot for a little bit there. But don’t be like me. Don’t wait. Hurry and make these Bacon-Wrapped Figs with Blue Cheese and Bourbon Caramel for your friends while you can still get fresh figs in abundance, because every melty-cheese, sweet-and-salty, crisp-bacon loving mouth is going to be thanking you for throwing them together.

And you’ll be thanking my broken computer and TV-binge-watching housemate for their parts in bringing them here for you to find.