These Irish eyes are smiling.

Because I now know how to make a Shamrock Shake at home. Cocktail-style. 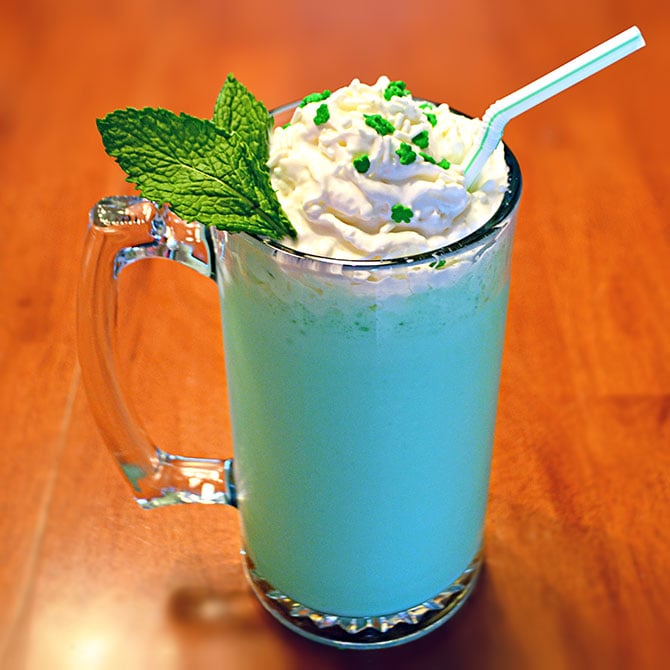 My boyfriend is an avid fan of McDonald’s elusive Shamrock Shake in all of it’s green glory.  I’d be lying if I said that I didn’t like it, too, but if I’m drinking down that many calories, there better be some alcohol in there– which is exactly what I said to James last weekend.  His response: “So put vodka in it.”

At first I thought he was being facetious, but then I realized that the man is a genius.  (He is actually a very smart guy in general, but it takes his suggestion to add alcohol to a McDonald’s beverage for me to deem him a genius.  If there ever was a valid indicator of intellectual brilliance, that’s it, right?)

So, of course, I ran to Wawa and picked up vanilla ice cream and whipped cream, and I pulled out my vodka, creme de menthe, and blender.  It was time to make minty magic.

The result was nothing short of delicious, and James, a few friends, and I enjoyed a few glasses as we played poker that night.  The Boozy Shamrock Shakes certainly made the get-together even more enjoyable.  Still, I felt like I could do better.  I’d revisit the recipe later that week, I told myself.  Then, as per usual, I forgot all about it.

But yesterday, after a massive baking mistake that cost me a gigantic batch of Irish Car Bomb Brownies, I was pretty bummed out.  I needed something new to post on the blog, something that hopefully would make use of the massive bottles of Jameson and Bailey’s that I had leftover.

Do you hear that?

I believe that is the sound of a choir of leprechauns singing out “Shamrooock Shaaaake”.

A boozy Shamrock Shake that is actually influenced by Irish ingredients… does it get much better than that?  Try it out, and you tell me.

McDonald’s Shamrock Shakes got nothin’ on this alcoholic version.