For me, football season has always been about the dips.  In fact, when I was just getting interested in cooking, I made a few trays of dip for a Super Bowl party at my years-later-to-be-boyfriend’s fraternity house, and he even just recently reminded me of how kick-ass it was and how quickly it was devoured.  Now that I think about it, that might have been one of the first times he ever went out of his way to talk to me.  (He’s kind of shy, or introverted, or whatever you’d like to call it, but if he’s already opening his mouth to yell at football players in between shoveling down half a tray of dip, he’ll also use it to genuinely thank you for your delicious contribution.)  You could say our relationship is owed to a football season dip.  It wouldn’t have much truth to it, but you could say it if you wanted to. 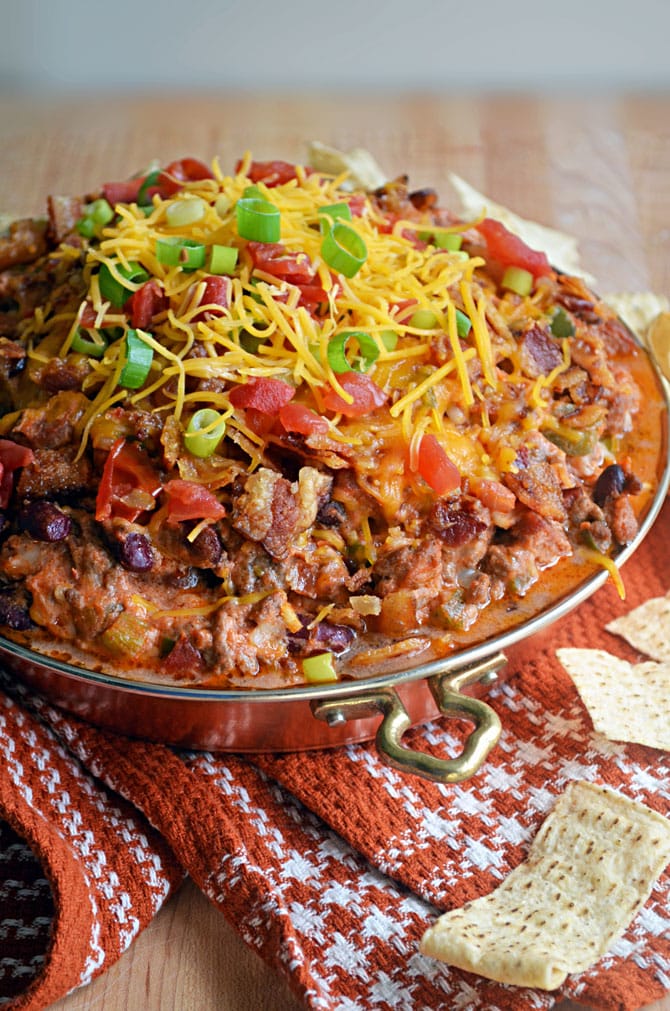 But this isn’t about my relationship.  It’s about football season, dips, and how everyone will suddenly think you’re the one of the greatest human beings to grace the face of the earth if you make a good one.   (I’d even venture to say the same holds true for any party or event you attend.)

Two, it should have at least one of the following things in it: sour cream, cream cheese, beer, meat, buffalo sauce, tomatoes, avocado, cheese and more cheese, beans, peppers, spinach, fruit, brown sugar, vanilla, or chocolate.  You get bonus points for using more than one, as long as you don’t mix the sweet with the savory– chocolate and buffalo sauce dip?  Gross.

Three, the idea of enjoying this dip should be more exciting to you than almost anything else you can imagine eating at the party.  If you’re making it for a football game, it should have the power to console the broken hearts of the losing team, or should be a proper celebratory snack for the winning team.  Dip is responsible for satisfying a wide range of emotions, you see. 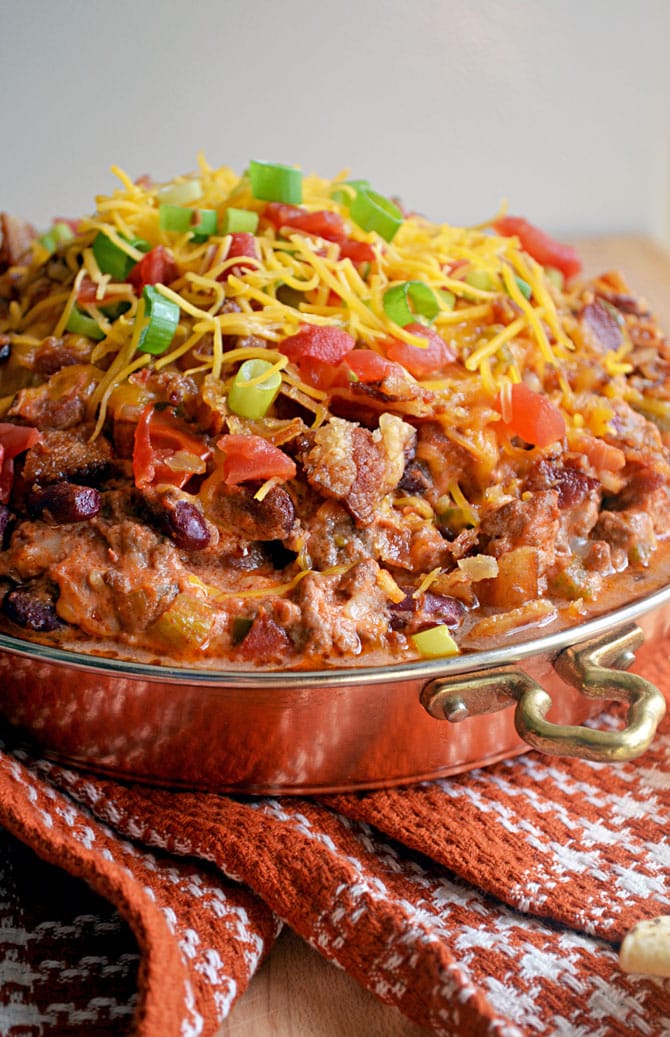 And this is how I came up with Chili Cheese Dog Dip, which may or may not be one of the greatest dips of all time.  (I’m leaning toward yes.  Leaning so, so very far.)  After all, what’s more could one ask for on game day than a hearty dip loaded with homemade chili, cheese, hot dogs, bacon, and more?  This dip was never tested by any football-watching snackers because it didn’t make it that long– my girl friends and I devoured this whole thing over the course of two days in the middle of the week.  (This would be much more jaw-dropping if you realized how much dip this makes… enough to feed a party full of linebacker-sized men rather than just 3 small girls.)  However, you can bet I’ll be making it again for game day.

Don’t be intimidated by the somewhat longer list of ingredients– it’s totally worth it and not actually difficult at all, nor is it expensive to make given the insane amount of dip it creates.  Plus, let’s not forget the benefit of becoming one of the “greatest human beings to grace the face of the earth” in the eyes of your football-loving friends.

You can serve this with tortilla chips, bread, potato chips, or spoons– heck, I’d eat this with my hands if that’s all that was available at the time.  Just be careful, some grease releases as it cooks so you’d probably want to put it in a much bigger bowl than I show in this picture.  Once you mix it up, it’s perfect, but it’s difficult to mix in a too-small pan like that one.  Lesson learned.

This game day snack is loaded up with all of your favorite chili cheese dog ingredients (plus a few more, because we like our chili dogs– and our dips– to be out-of-this-world). Make it for a crowd and watch it disappear!