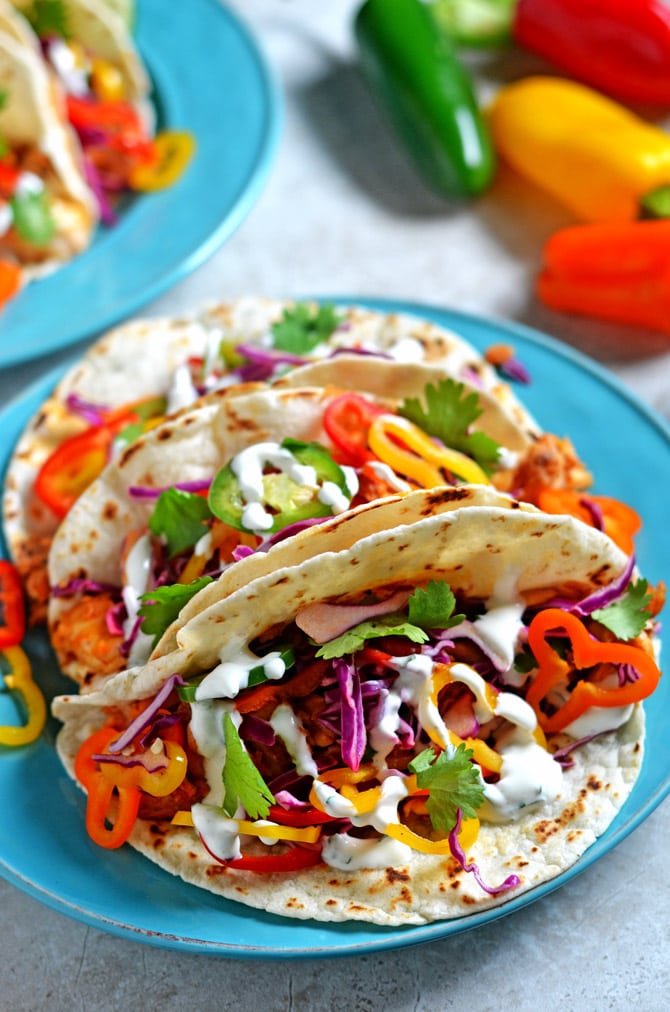 Last summer, I surprised myself by falling in love with fish tacos. After making Blackened Fish Tacos with Avocado Cilantro Sauce on a whim, I swore that I’d never make fish tacos another way again, because as they say, if it ain’t broke, don’t fix it.

But just a year later, I was putting away a bag of bright mini bell peppers, minding my own business, and I started having intrusive thoughts about how freaking awesome they’d look on tacos. Mix them with red cabbage! I thought. Add in some jalapenos!

Marinate the fish in chipotles and pineapple juice. Okay, okay. I mean how could I push that idea out of my head? Spicy, sweet, crunchy, easy, and seriously colorful… you just can’t fight that. Why would you want to? 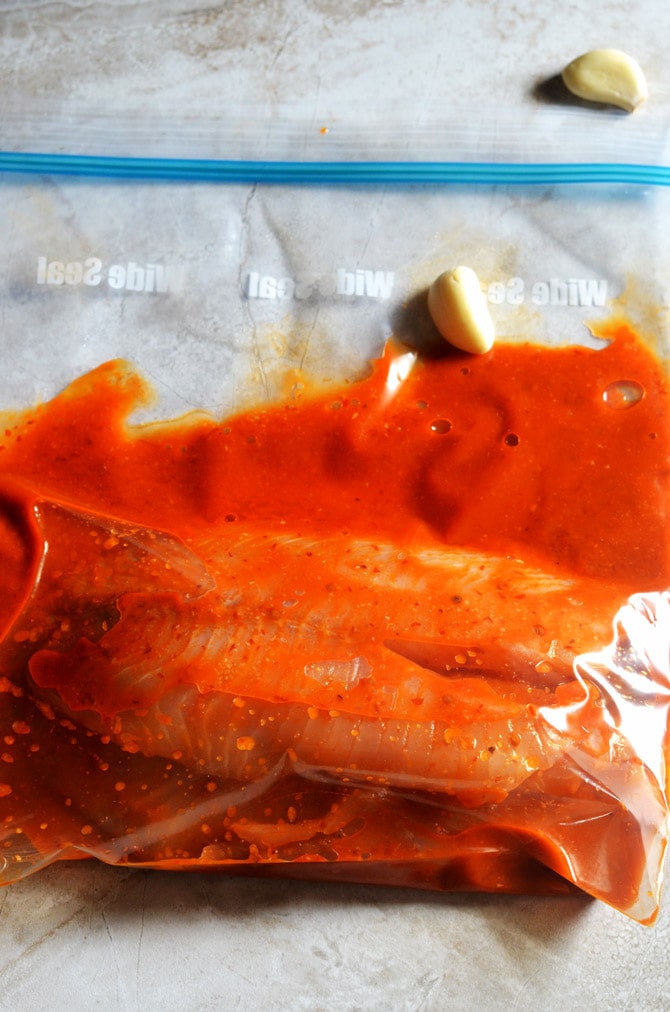 Making the marinade only took minutes. I combined olive oil, lime juice, pineapple juice, canned chipotle in adobo, minced garlic, and salt, and put everything in a sealable bag to make sure the tilapia was well-covered. Then off it went to the fridge to soak up all of that deliciousness while I prepared the slaw. 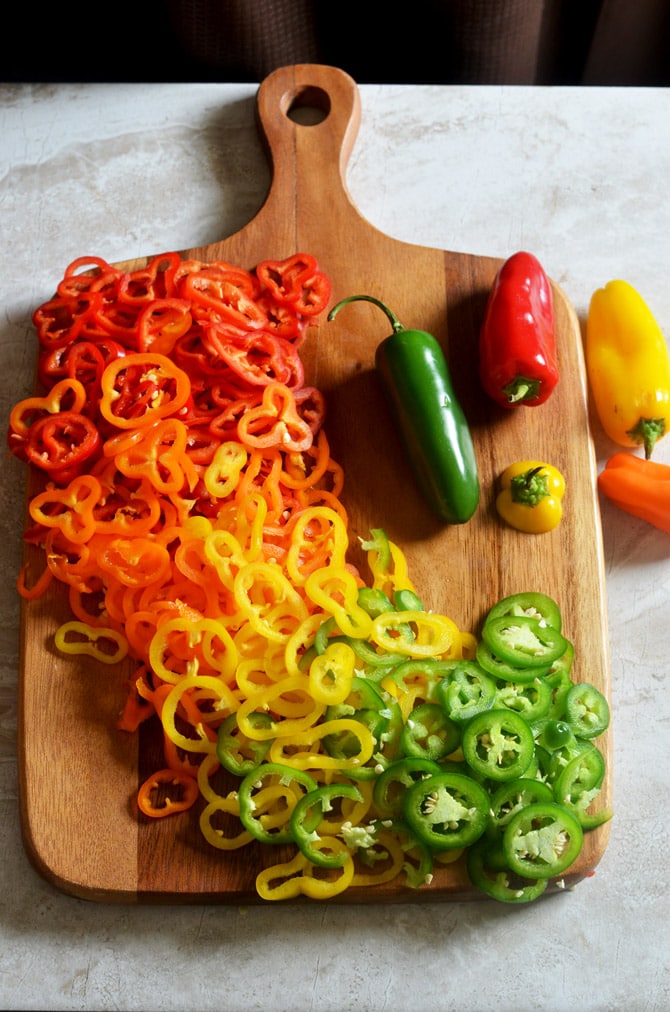 To make the slaw, I sliced sweet mini red, orange, and yellow bell peppers with some jalapenos for an added kick using my mandoline, which, let me just say, is my food prep savior. I tossed it all together with cabbage, lime juice, a bit of sugar, and salt, and resisted the urge to take forty million pictures because it was such a pretty mixture.

By the way, I know that I’m calling this Rainbow Pepper Slaw and that it’s technically not rainbow because it’s missing the blue– my kindergarten past-self is so mad about it, trust me. You spent weeks learning and reciting the colors of the rainbow, Morgan, how could you?! Lisa Frank would be so disappointed.

If you’re really dead-set on getting all of the colors in, you can crunch up some blue corn tortillas and sprinkle them on top to cover all of your bases.

(Or just serve the tacos on blue plates like I did and hope that no one notices. Shh.) 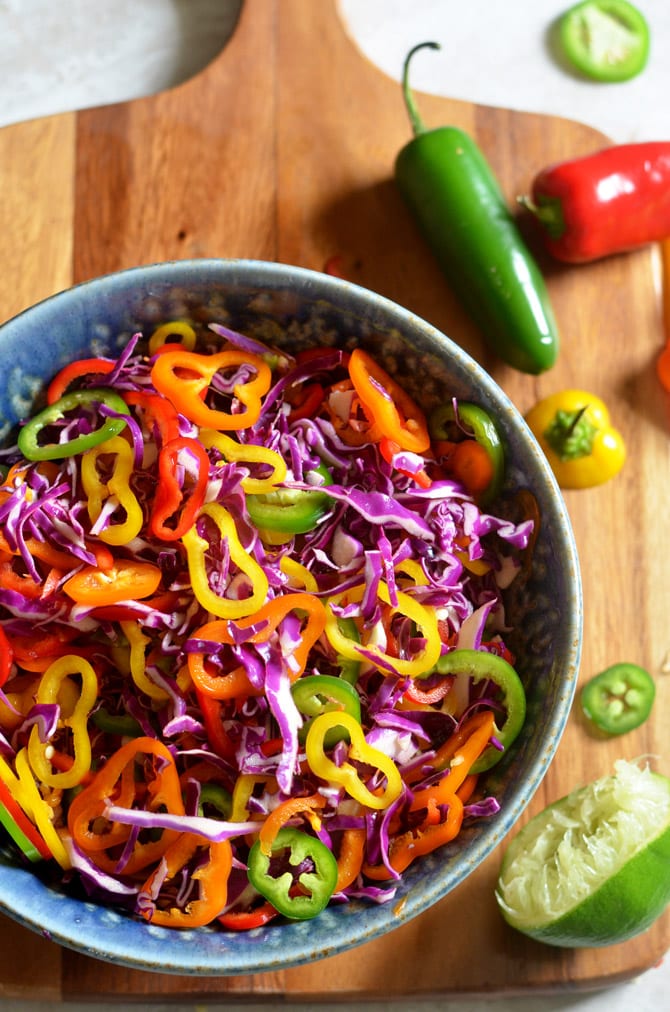 When the fish was good and marinated, I threw it in a hot pan and cooked it until it flaked apart easily. Along with soft flour tortillas, the crunchy slaw, and a drizzle of cool cilantro cream, they were the perfect warm-weather dinner. My brother Mark (who could eat fish tacos for every meal and not think twice about it) even told me that he thinks he likes them even more than the last fish taco recipe! Gasp! 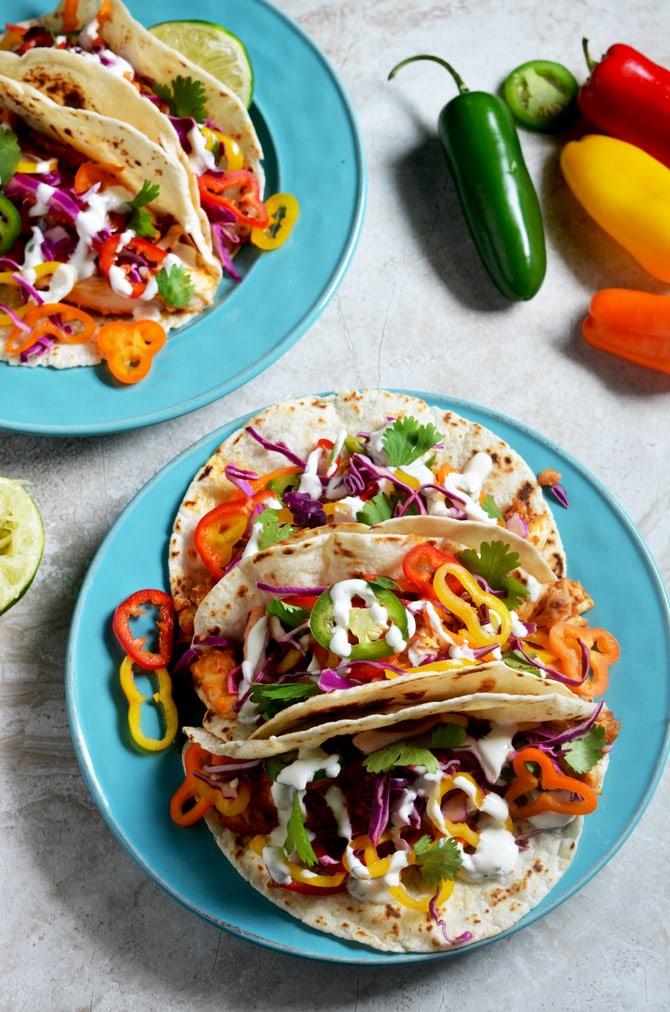 Try them out yourself and make sure to take a picture of your rainbow tacos for Instagram or Twitter! Tag #hostthetoast to add them to the feed, and let me know if you love them as much as I did!