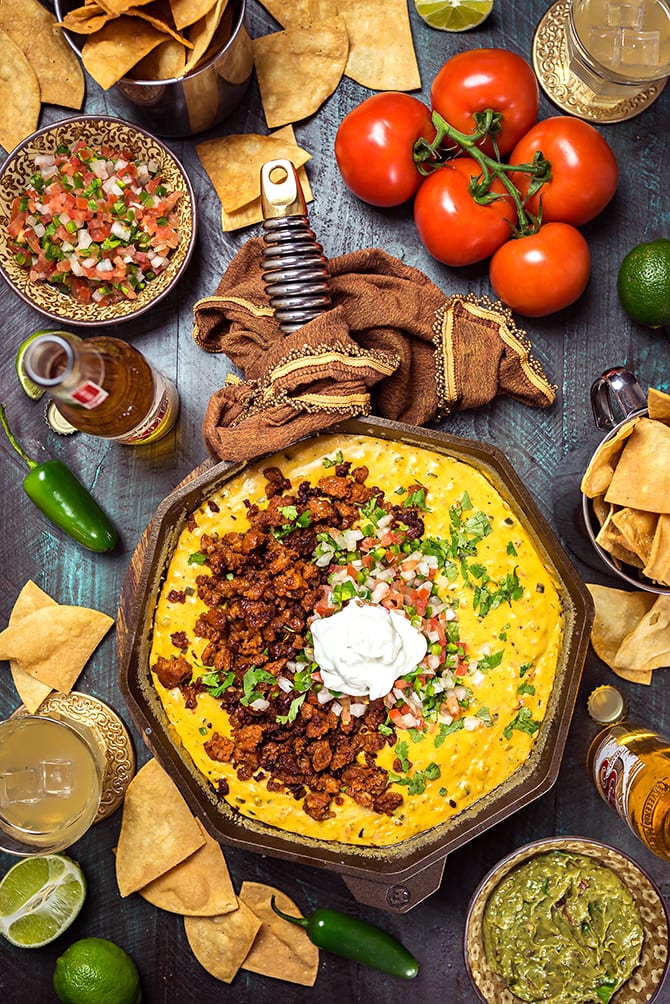 No kidding: Today, I ran into my friend’s mom at the grocery store and, unprompted, she told me that she wants a taco bar and queso fountain at her 50th birthday party this year. With– I quote– “none of that processed cheese shit.” And I was like, “Stephanie, I got you. Check out my blog in like 4 hours for proof. Also, did we just become best friends?”

Mind you, this Chorizo Queso Dip really wouldn’t fit the bill for her. Firstly, because she’s a vegetarian (though this can easily be made without meat, or with soyrizo instead), and secondly, because the chopped onions and peppers would probably clog up a queso fountain. But the point is that I know how to make a MEAN queso dip without any velveeta or canned tomatoes, using ACTUAL real cheese. My favorite way to do it is this super flavor packed, filled to the gills version (which I will be making for my annual Cinco de Mayo party on Saturday), but yeah, I could make it for a fountain too. 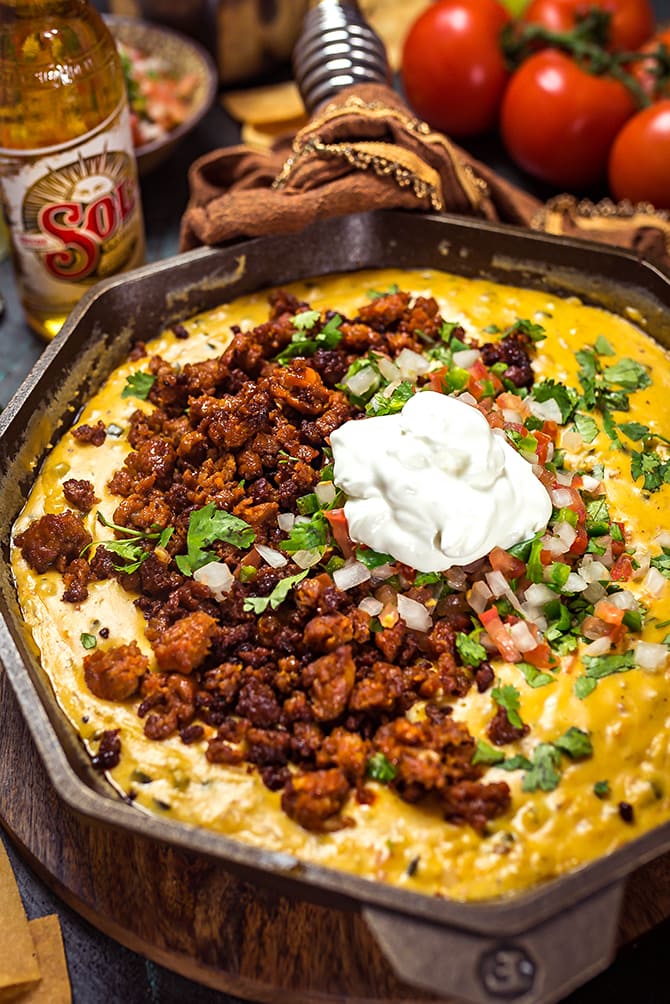 Cheese is like my closest friend (well, maybe now cheese and Stephanie), so I always feel a little uncomfortable with the idea of an imposter fake cheese sauce walking around calling itself queso. If it can survive for months on the grocery store shelf, I don’t trust it one bit. And you know what? You shouldn’t either. Because it’s weird… and really doesn’t taste that much like cheese.

And it is SO EASY to make your own. Literally all you need is a couple of blocks of cheese, some cornstarch, and evaporated milk. Thanks Kenji, by the way, for showing me the cheesy light. 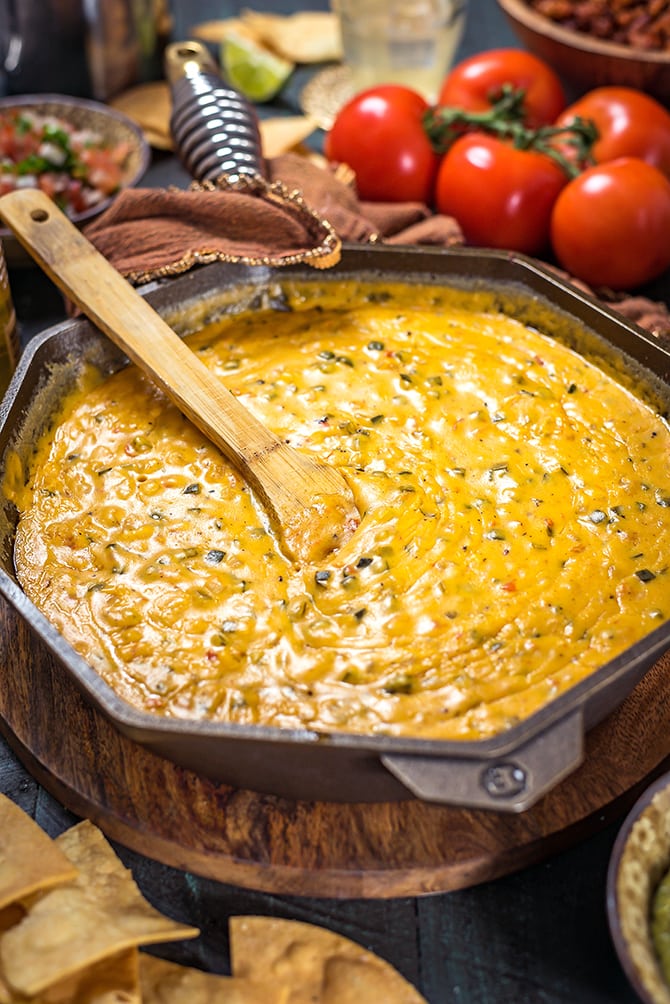 The best thing about using evaporated milk and cornstarch rather than, say, butter and flour, is that you don’t get the flavor of the flour throwing things off, and you also get a completely smooth cheese sauce in the end. Even when it cools to room temperature or is thrown in the fridge for later, it doesn’t separate or clump up. 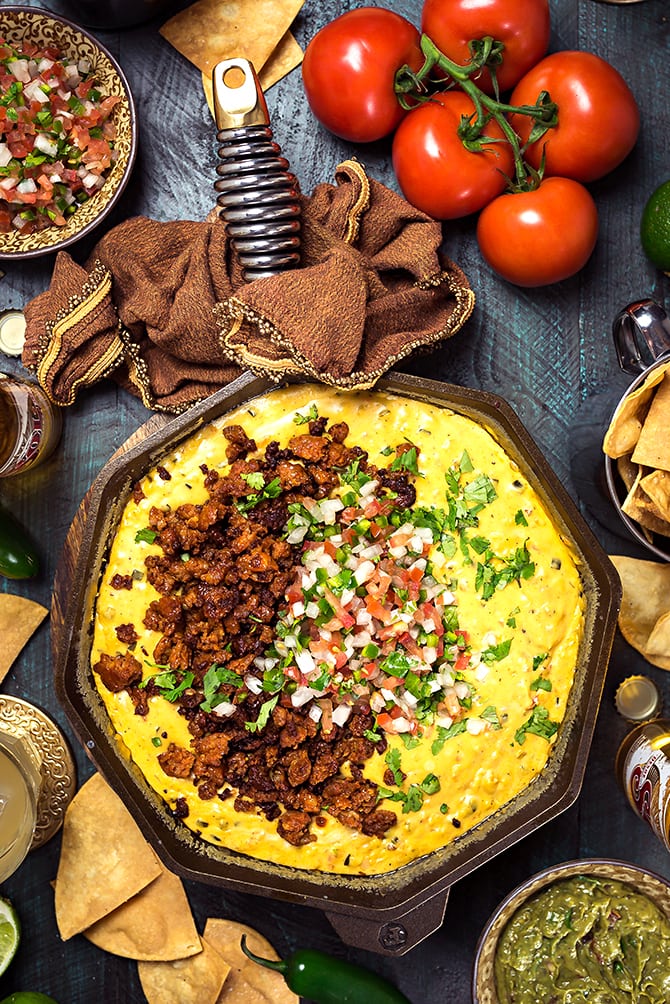 So as I mentioned before, you can definitely make this without the chorizo. However, there is just something magical about the taste and texture that those little spicy crumbles of Mexican sausage lend to the queso– and cooking the poblano, jalapeno, garlic, and onion in the rendered oils from the chorizo makes them leagues better as well.

I already know that this will be a hit this weekend because I’ve made it about a bajillion times and it’s seriously amazing. But you don’t have to take my word for it. If you’re doing a little Cinco de Mayo get-together (or just craving queso in general) you should absolutely try it. And then pretend you’re unsure about whether or not you like it just so that you can make another batch for testing purposes. Maybe even make some without the chorizo to see how it fares in the cheese fountain. Any excuse to eat as much REAL CHEESE queso as possible, really.

In a large skillet over medium-high heat, cook the chorizo, breaking up as it cooks. Once cooked through and broken apart, transfer the chorizo to a bowl, leaving the rendered fat in the skillet.
Add half of the onion, half of the jalapenos, all of the poblano, and all of the garlic to the skillet over medium heat. Cook, stirring occasionally until very soft, about 10 minutes. Stir in half of the tomatoes. Season with salt. Cook, stirring occasionally, until the tomato juices evaporate, about 6-8 more minutes.
Meanwhile, combine the remaining tomatoes, onions, and jalapenos in a small bowl. Add in the chopped cilantro and lime juice. Season with salt, to taste. Mix well and set aside until ready to serve.
Pour the evaporated milk into the skillet. Let warm.
Toss the grated cheese in a large bowl with the cornstarch. Add the cheese, one handful at a time, to the skillet, stirring to melt as you go. Continue to stir until fully melted and thickened to coat the back of a spoon. Remove from heat.
Top with the crumbled chorizo, pico de gallo, additional cilantro, and sour cream, if desired, to serve. Serve warm.