WARNING: Unless you’re planning on a) having company over or b) giving the Cinnamon Bun Popcorn out as a gift, do not make this.  You will eat it all.  It very well might be the most addictive snack of all time. 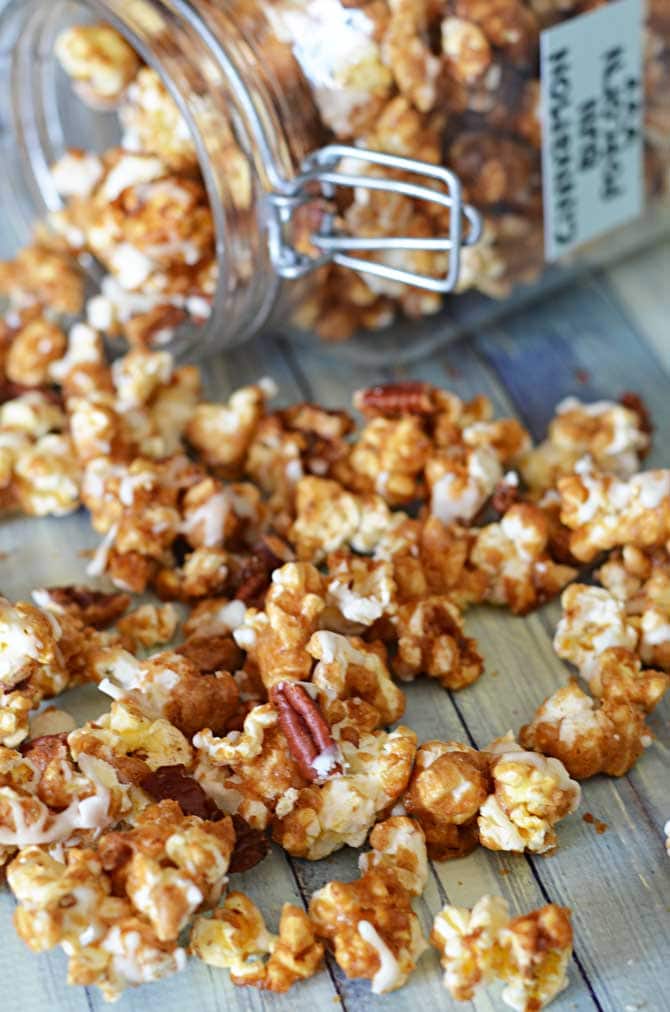 Who can resist buttery, cinnamon-sugary popcorn with a few pecans mixed in and a generous amount of white chocolate drizzled on top?  Not I.  No, not I.  Don’t ask me how much of this I’ve eaten.

Seriously, don’t.  I don’t want to think about it. 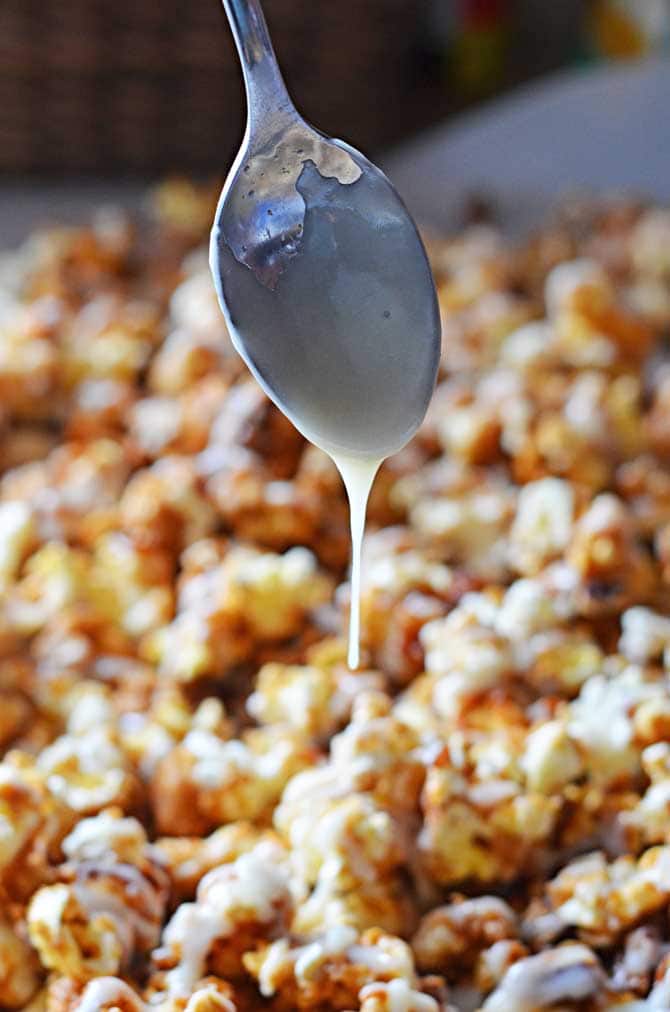 A few Christmases ago, I picked up a tub of Cinnamon Bun Popcorn from Target and gave it to James as a mini present.  He ate the entire tub in a matter of 2 or 3 weeks.  By himself.  I’m pretty sure he replaced meals with it.  He might have even ate it in his sleep– who knows, because that was a gigantic tub of popcorn.

Since then, there have been plenty of holidays and presents exchanged, but the other day James told me that the Cinnamon Bun Popcorn was the best gift I had ever given him.  Is that flattering or insulting?  I’m not sure…

I decided not to take offense and instead went out to see if I could find some more Cinnamon Bun Popcorn to surprise him with, but I couldn’t find it anywhere.  Since I was now gung-ho on getting this popcorn for him (as I tend to be whenever an idea pops into my head), I decided to try making it myself. 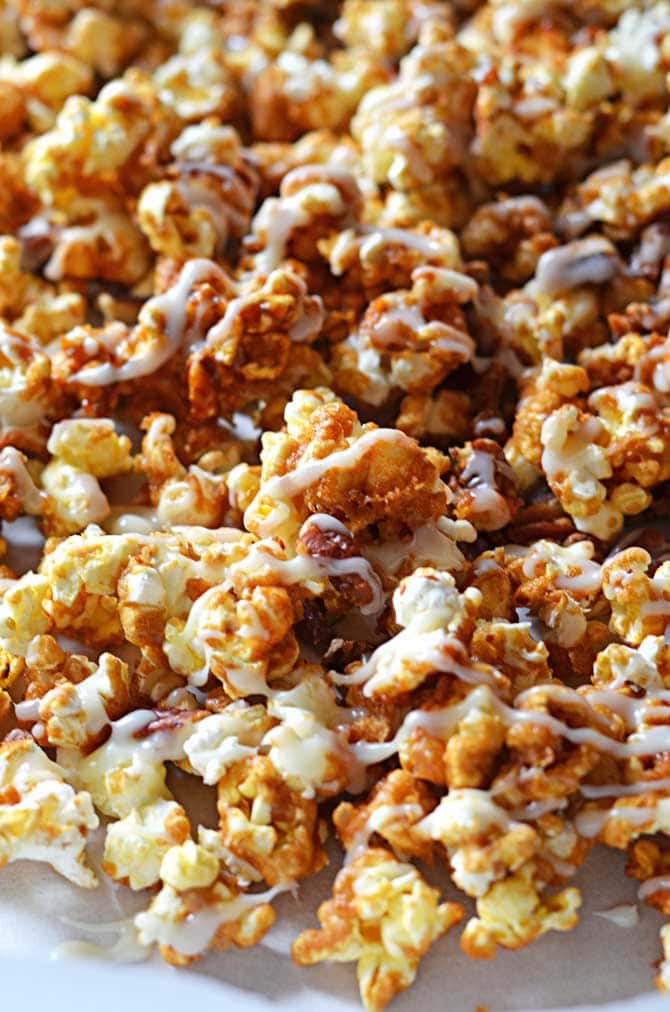 I realized that my first batch was going to be a disaster half-way through.  The caramel was impossible to evenly spread around the popcorn, and I’m pretty sure it could have broken a tooth.  For my second batch, I had a similar experience, but this time I decided to actually go ahead and try and finish it, and thank goodness I did.  When I put the popcorn/caramel glob into the oven, it all softened up and mixed perfectly!

Everyone who tried the popcorn loved it, and every single person said, “I’ll just have ONE MORE PIECE” for about 30 minutes straight, or until they physically could not eat any more.  I told you, it’s addictive.  When James finally had some, he told me, “This is even better than the kind you bought me!”  Victory!

Then he said, “Get it away from me.  I’m going to eat the entire thing and we’re trying to be healthy.”  Oh yeah, I forgot about that.  Woops.  He ate a few more handfuls and then refused to take it home because he “seriously would eat it all in one day,” so I’m saving to give to my friends while we watch the Oscars.  Don’t you think this would make a great treat for the Academy Awards?  Snacking on gourmet popcorn as you watch to see who wins Best Picture sounds like a good time to me. 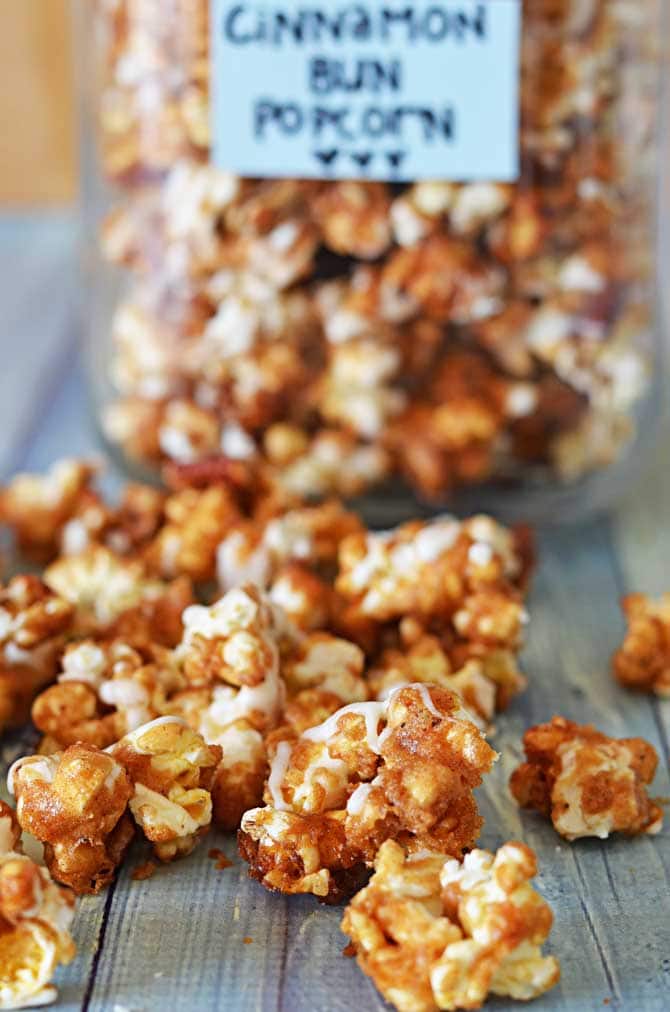