There are few things in the world more glorious than a meal that you prep in the morning, forget about for a few hours while you go to work or run errands or watch 6 back-to-back episodes of Project Runway on OnDemand (I can’t be the only marathon-TV-watcher here), and put the final finishing touches on a few minutes before sinking your teeth in.  Thank you, slow cooker, for doing all of the hard work for me when I’m feeling exceptionally lazy and hungry at the same time.  You’re a real pal, and I am forever in your debt for many a delicious meal. 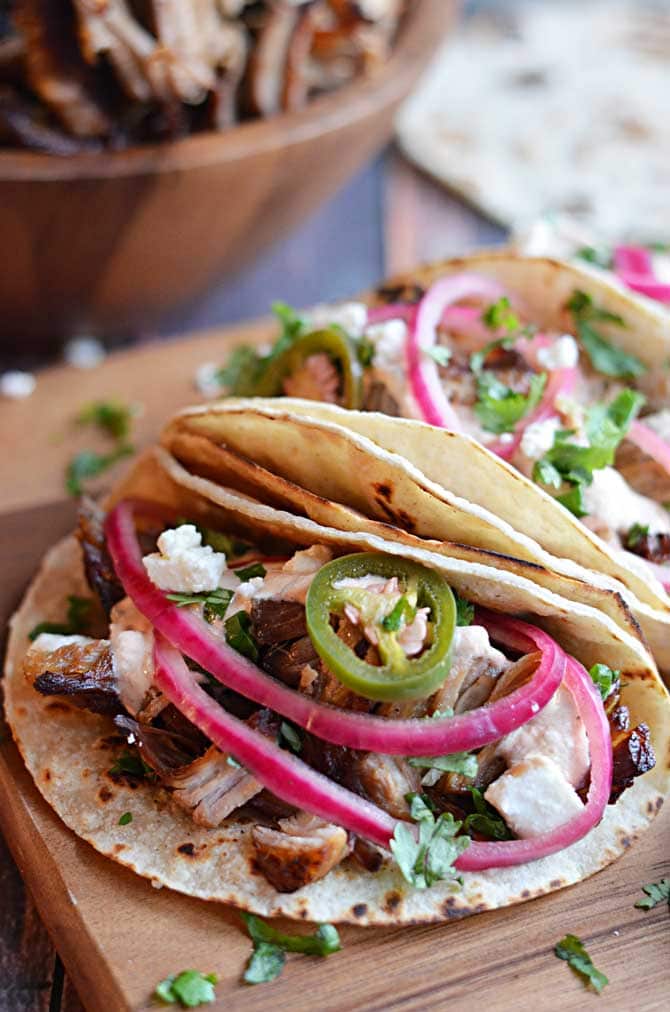 But the most delicious meal of all to ever come out of my crock pot?  It’s hard to say, but it just might be these Crock Pot Carnitas.   I know what you’re thinking.  Carnitas in a crock pot?  But carnitas must be tended to, lovingly, and basted in lard until they reach that perfect flavorful crispiness!  Well, that’s what I thought, too, until I found a recipe from Gimme Some Oven that changed the game forever.  No lard.  No hours spent hovering over a hot stove.  Still very-much-so man-approved. 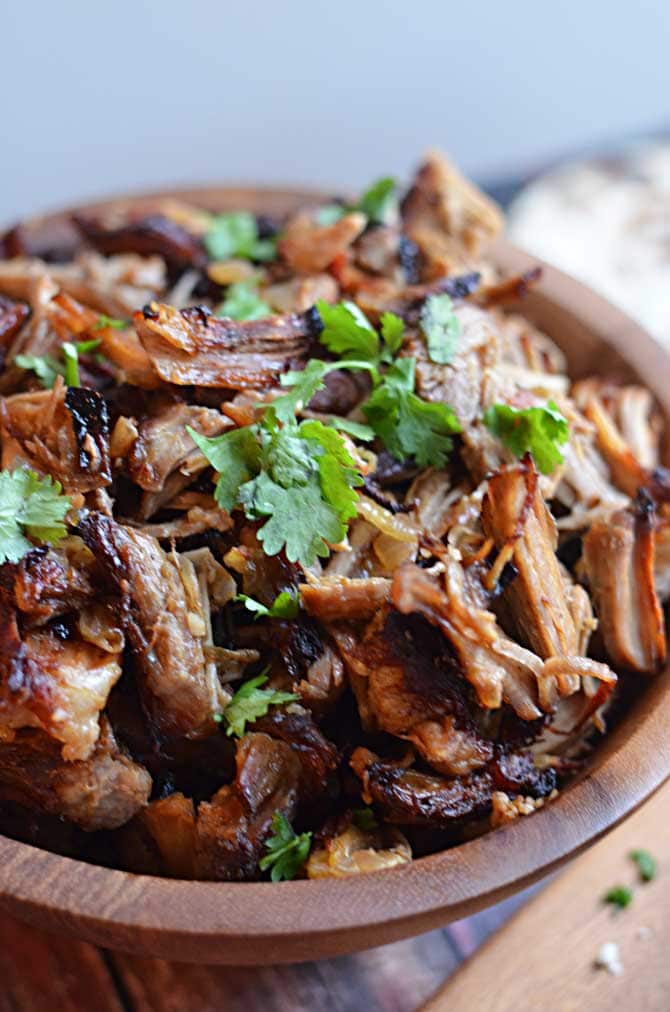 Can I just tell you that James has been RAVING about this pork for like 2 weeks now?  He was picking at the pork in between the broiling stage and kept moaning over how good it was– it was hilarious.  He also kept coming up with excuses to eat more.  “You don’t need this piece, it looks kind of funny, I’ll just go ahead and get rid of it for you… by eating it.”

“I think maybe I should taste-test this again.  You know, just to make sure it’s good.” Sure, buddy.  Have at it. 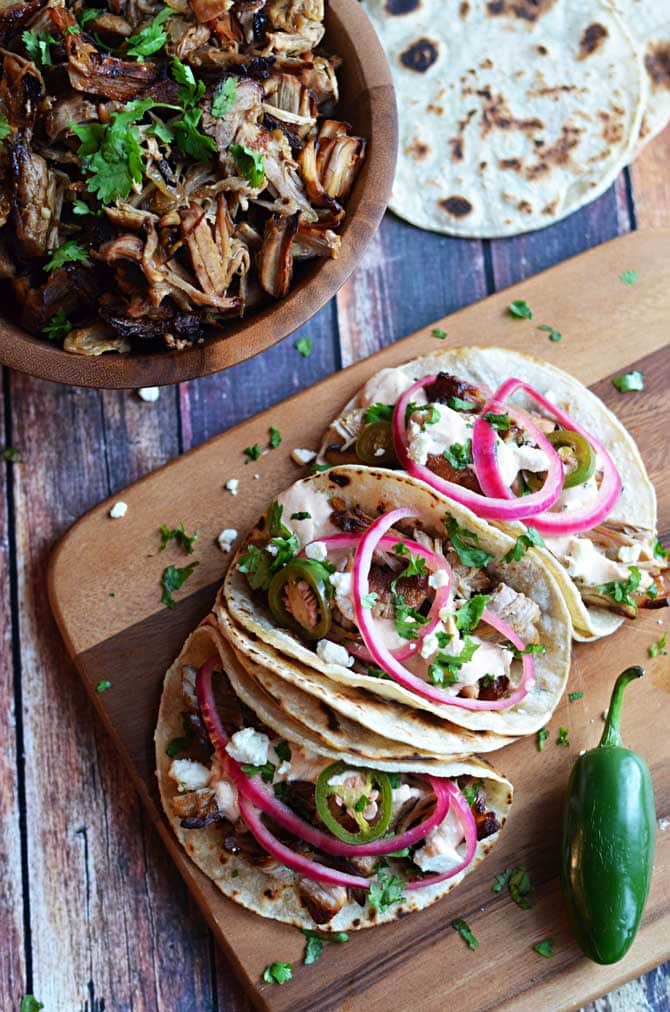 He hardly spoke while eating the tacos, his concentration focused entirely on trying to pace himself and getting the perfect carnita-pickled onion-chipotle cream ratio in one bite.  I could see it in his eyes.  But afterward, I’m pretty sure I got about 5 times more “I love you”s and “You’re the best”s than usual.  The way to a man’s heart… 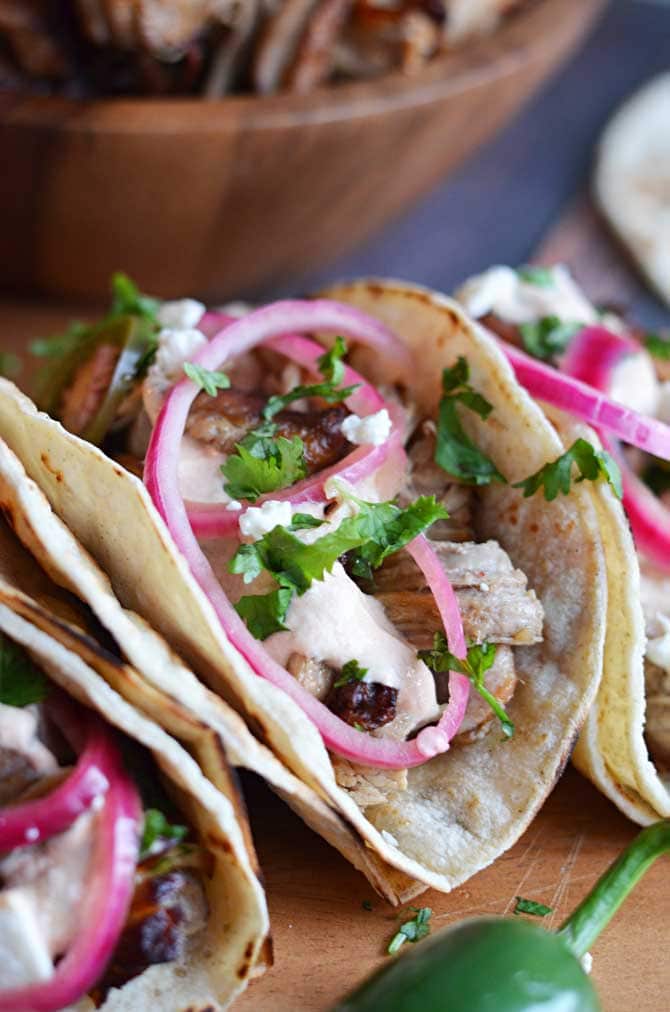 It wasn’t just James who loved them, though.  My whole family did, and yours will too.

I’m definitely going to make a repeat batch of these for the next football game, and probably for the “Classy Housewarming Party” that I was just invited to. (The invite reads, “We have the TV, stereo, and ping pong table set up – so we’re pretty much ready for a party.”  Bachelor-level-class right there, haha!)

Really, after you make these once, you’ll just be looking for reasons to make them again and share them with everyone you know.  Try them out for yourself and see!

Recipe slightly adapted (and added to) from Gimme Some Oven

For the quick pickled onions and jalapenos:

For the chipotle cream: