Forget everything you thought you knew about stuffing. This Croissant Sausage Stuffing– with its ultra-buttery, herbaceous flavors and flaky, fluffy layers– is changing the Thanksgiving game. 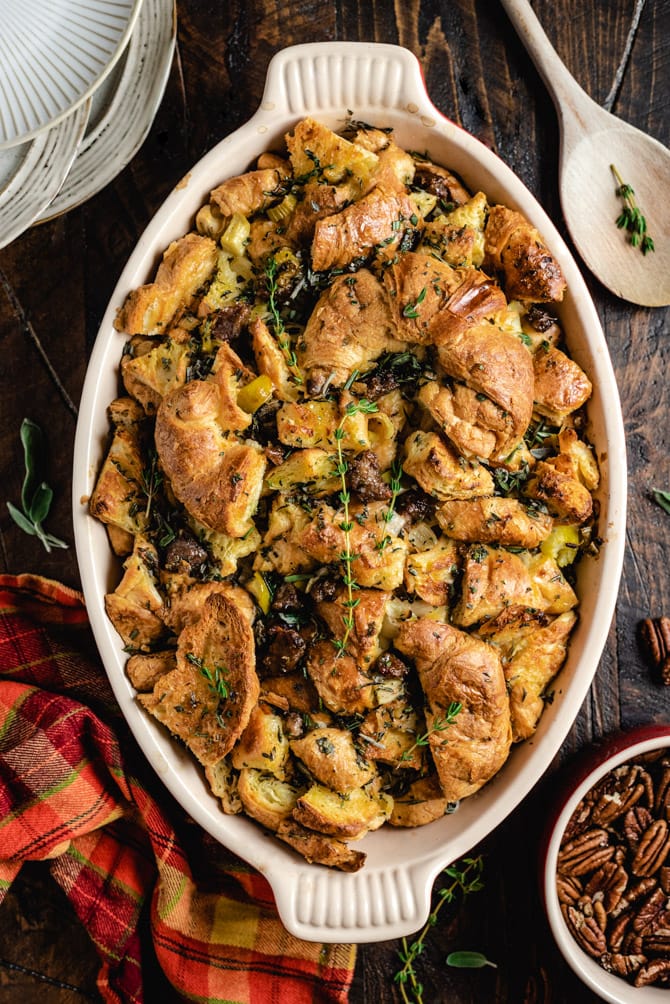 I’m a carb fiend by nature, so Thanksgiving, with its glorious mounds of mashed potatoes, sweet potato casserole, and (most importantly) stuffing is a day straight out of my dreams.   Sure, the turkey is great, but come on. Stuffing. The stuffing is where it’s at, people.

And because stuffing has brought me so much happiness, I just feel guilty reaching for a cardboard box of the pre-made stuff that tastes like…Well, cardboard. Stuffing deserves better.

So a few years ago, I started to *think outside the box*, swapping the dense, tasteless bread for buttery, flaky croissants. Total upgrade! My Croissant Sausage Stuffing was sweet and salty with a texture that was crunchy and moist at the same time.

The recipe was a hit, but over the years, a few substitutions have made their way into my Croissant Stuffing, and I figured it was about time to update the official recipe with the new-and-improved version. In this reboot, I swap tart cranberries for sweet fall apples, pump up the richness with heavy cream and pull it all together with a little egg. It’s just as easy as the original, and guaranteed to be a hit with even self-proclaimed stuffing haters. 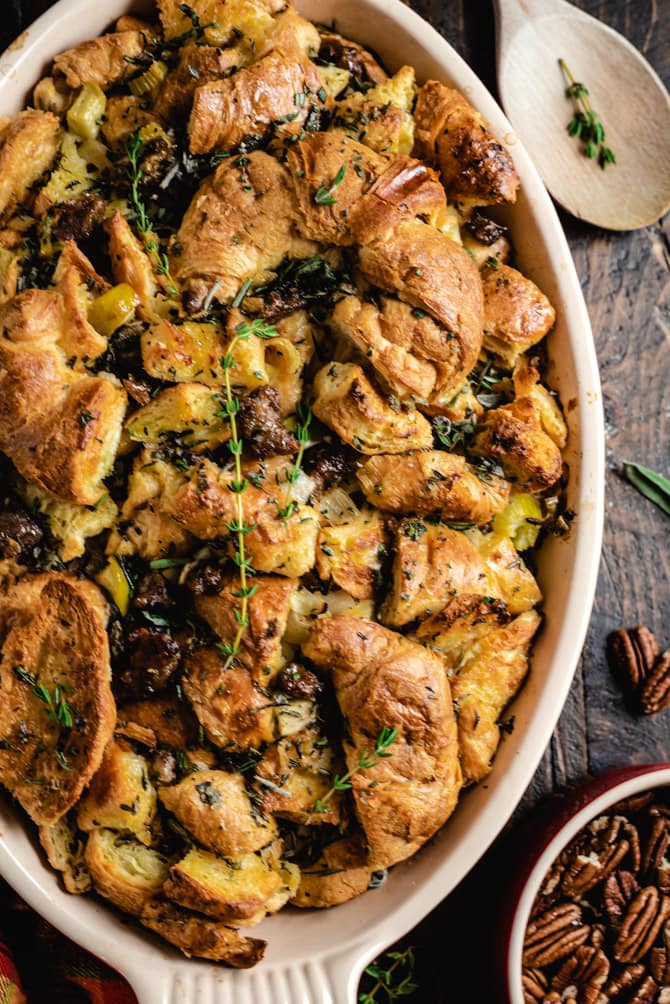 I’m not ultra-pedantic when it comes to food names, much to the dismay of some of my reddit readers who have VERY STRONG opinions about recipe titles. (It’s okay, I love you all.)

But if we were going by the book, most dictionaries distinguish stuffing as a mixture used to stuff another food, usually poultry, before cooking. That would mean “dressing” – an essentially identical dish with a different name – can be categorized as any recipe you cook outside your turkey. A true “side dish” rather than a “filling”.

Now maybe that theory was true at one time, but if it was, it sure isn’t anymore. The fact is that most southerners call the dish “dressing” regardless of where it’s been baked. For that matter, plenty of us Yankees cook our stuffing separately anyway to avoid salmonella and uneven cooking.

And if you don’t believe me, just ask Google. States like Mississippi, Alabama, and Georgia hunt almost exclusively for “dressing” recipes while Maine, Vermont, and Pennsylvania, are the top stuffing-searchers. The truth is, “stuffing” or “dressing” has more to do with the location of your Thanksgiving table than it does with your recipe.

Whatever you call it, the important thing is that this iconic side dish is moist, carby and perfect for soaking up any Thanksgiving morsels left on your plate. Check, check, and check! 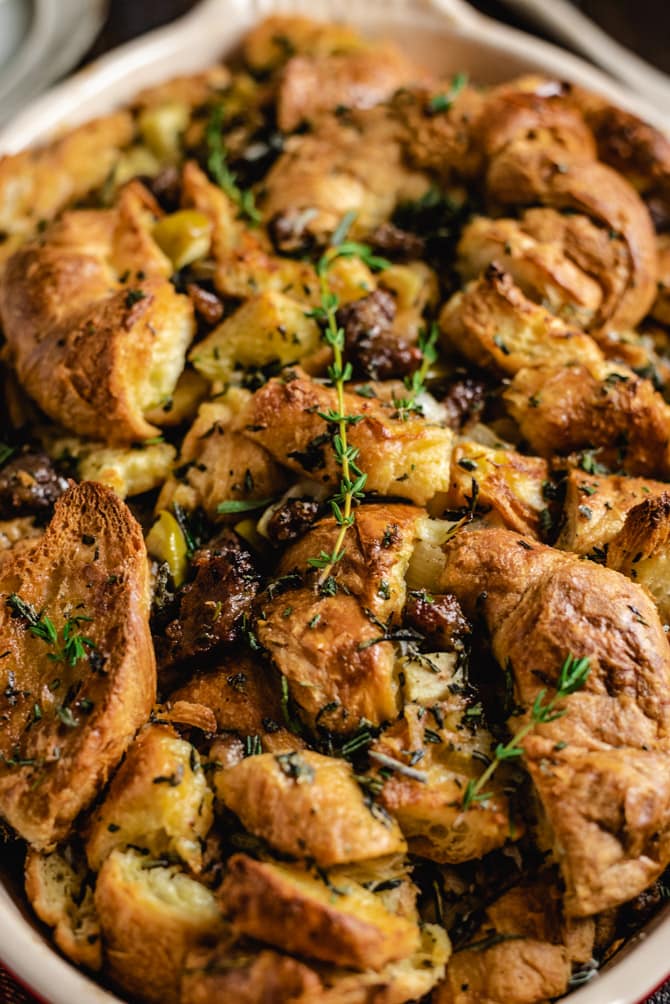 WHAT’S IN THIS CROISSANT SAUSAGE STUFFING? 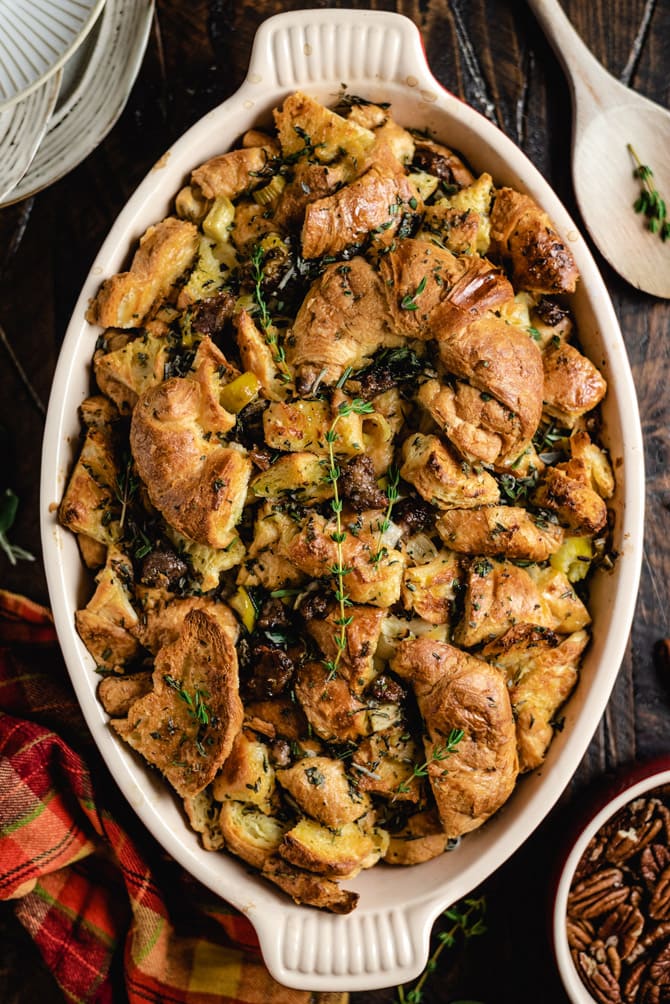 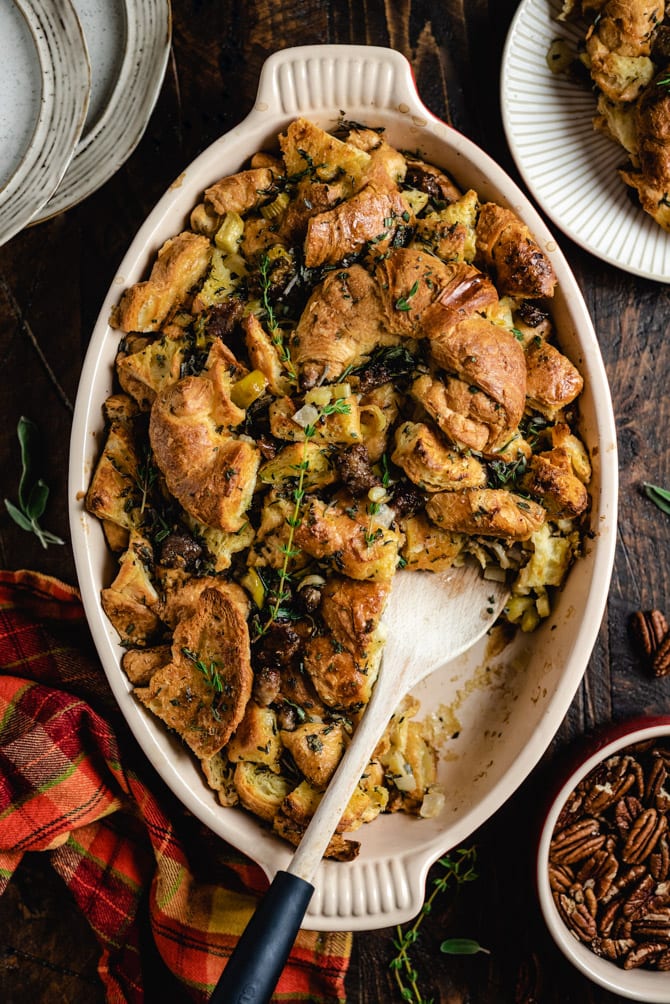 MORE SIDE DISHES TO MAKE THIS SEASON

This Thanksgiving, switch things up from your typical stuffing side dish! This Croissant-Sausage Stuffing will be the talk of your Turkey Day. (Or should I say “Stuffing Day?)

Preheat oven to 350°F. Generously butter a large casserole dish and set aside. Line a baking sheet with foil or parchment paper.
Place the split croissants on the lined baking sheet and bake until crisp, about 5-10 minutes, cut side down. Remove and let cool. Coarsely crumble or chop the croissants into a large bowl and set aside.
Melt 2 tablespoons of the butter in a skillet over medium-high heat. Crumble and cook the sausage in the skillet until browned and cooked through. Transfer to the large bowl with the croissants. Saute the chopped onion, celery, and apple over medium heat until slightly soft, and season with salt and pepper to taste. Remove the from heat and toss with croissants. Add the herbs.
In a small bowl, whisk together eggs, 1 cup of the broth, and heavy cream. Pour over the croissants. Add additional broth to moisten to your liking. Transfer the stuffing mixture to the buttered casserole dish and top with remaining butter. Bake until crisp, about 30 minutes.