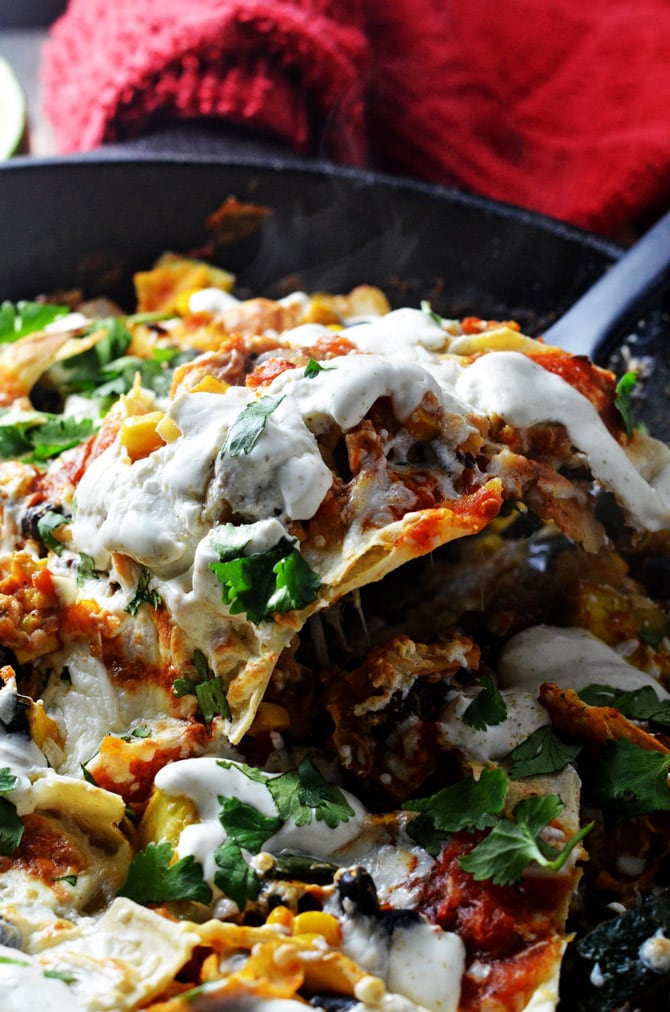 In an unexpected twist of events that would shock and appall my former 5-year-old self, I have grown to love vegetables.  I am like a kid in a candy store in the produce section during the warmer-weather months.  Aside from the massive (and I do mean massive) amounts of cheese in my fridge, there are fresh veggies occupying every inch of shelf and drawer space.

Still, I have somehow managed to sadly under-represent vegetable-based dishes around here so far. My vegetarian friends do not approve. Something must be done to change it, so I’m here with a meat-free, gluten-free, absolutely awesome recipe that even meat-eaters will love. 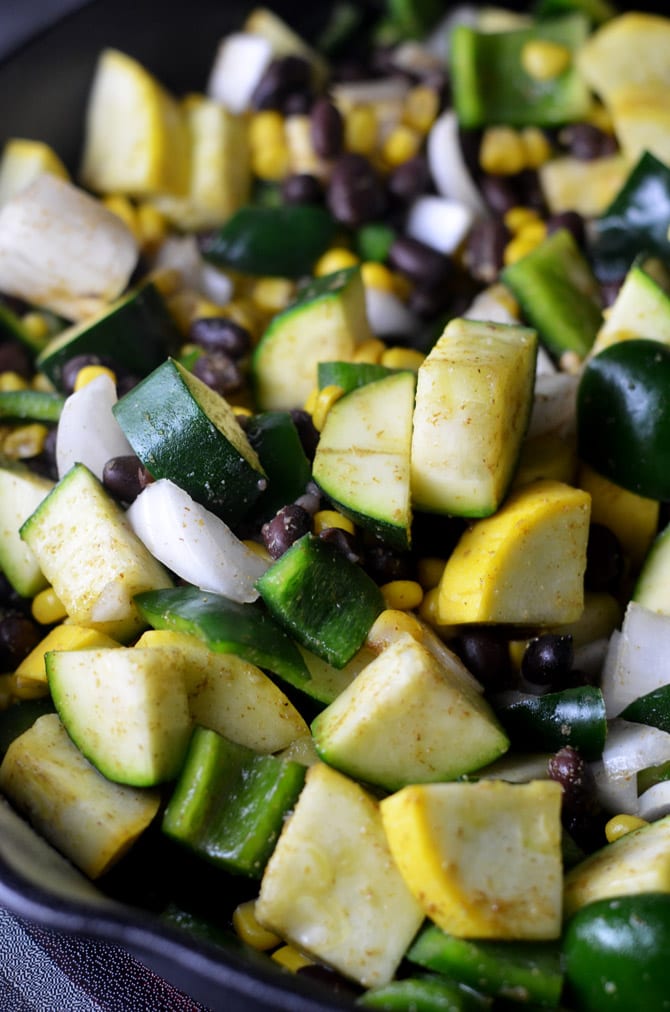 I often use my friends as taste-testers, whether they can make it over when I’m cooking or if I just swing by to drop off leftovers. I dropped a container of the Vegetable Enchilada Skillet off for my friend, Elysse, who is a self-proclaimed enchilada fiend, and she made a point to let me know that it “had me and Amanda with full mouths like ‘ohmygawdyum’.” Amanda added, “We stopped everything after having a bite… Everything around us went silent and a golden light poured out of the container with harps playing in the background.” Needless to say, no flavor has been sacrificed in the veggie-fication of this dish! 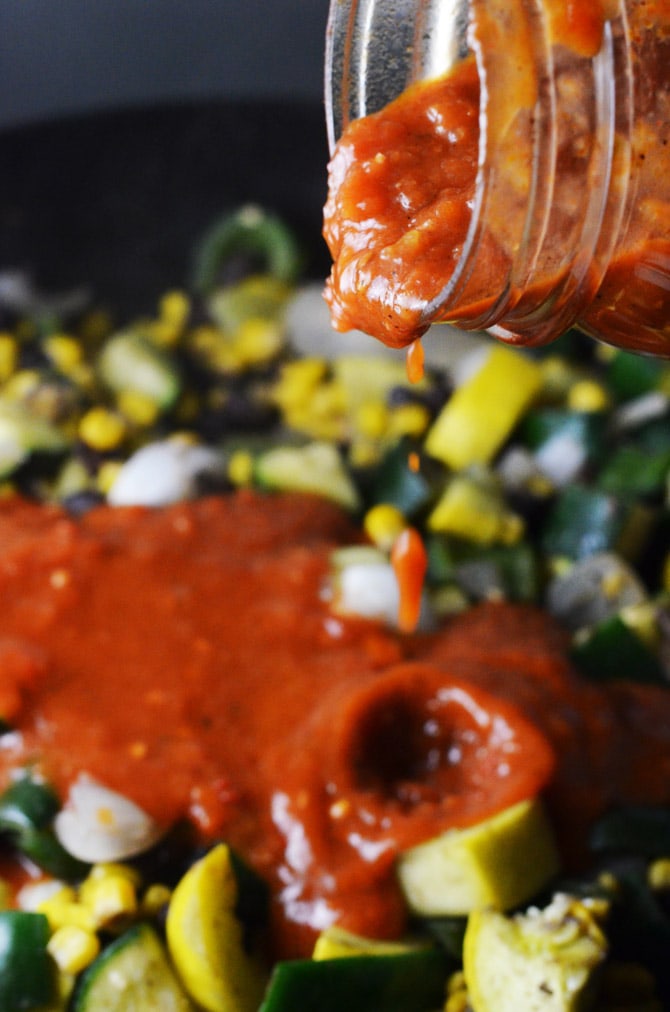 I used my Easy Homemade Enchilada Sauce here, but you can use store-bought instead if you prefer. (But first you should know that the homemade sauce is what’s up. I want to eat everything in enchilada-form just so I have an excuse to ingest 10 tons of the stuff.) Choose wisely. 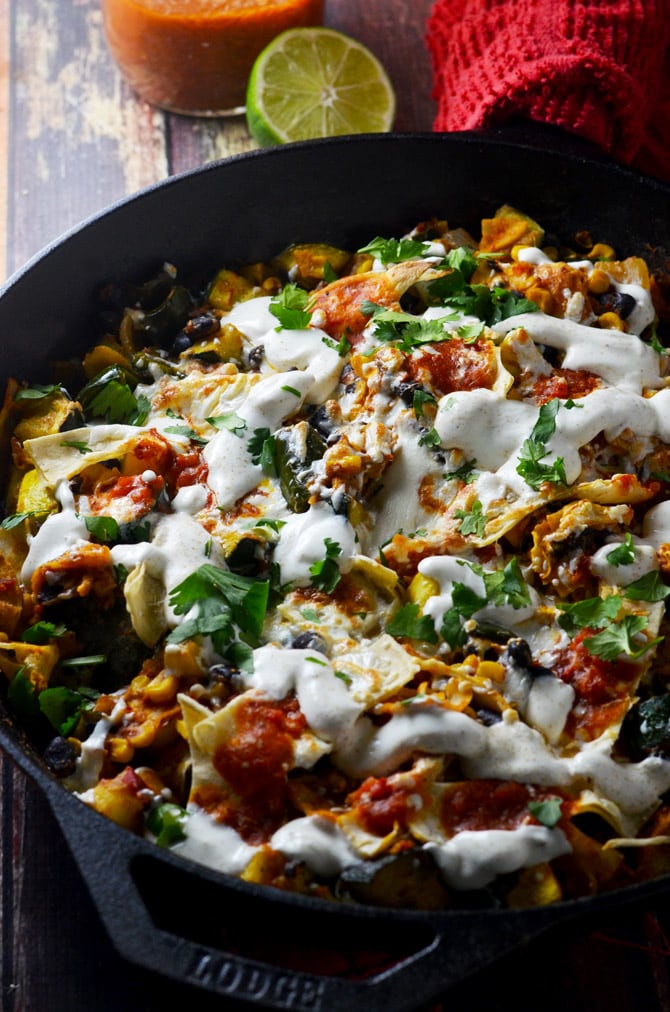 Also, that Cumin-Lime Crema that you see on top– don’t skip it. I used plain greek yogurt to make mine, but sour cream works well too. You can really do a lot of customizing to this recipe, so let your imagination run wild. Make it for Cinco de Mayo or just any night when you’re craving a quick and delicious dinner (it only takes 30 mins to put together), and don’t forget to take a photo! Tag it on Instagram or Twitter with #hostthetoast to show off your version!

I used Oaxaca cheese, which tastes similar to Monterey Jack but stretches like Mozzarella. Feel free to use whatever cheeses you have on hand, but I would suggest one (or a combination of) those mentioned.