Did you know that you can make tender, restaurant-quality gnocchi at home in less time than it’d take for takeout to arrive? It’s almost unbelievable that something as tasty and impressive as this ricotta gnocchi recipe could be so easy to make from scratch, but the ricotta base makes it foolproof, even for novice cooks. 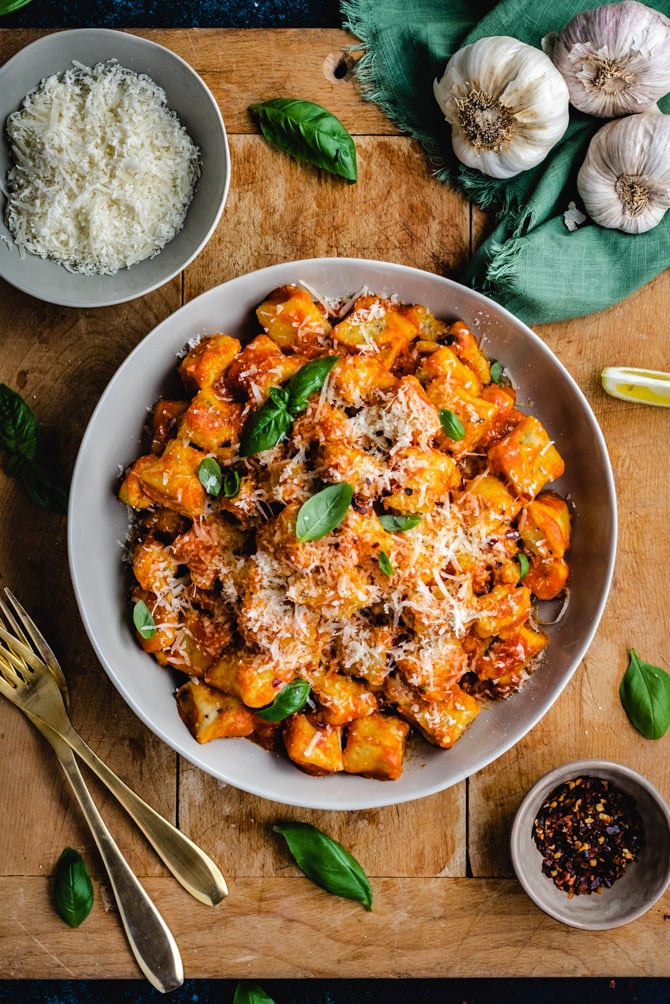 If you love potato gnocchi but you’ve never sunken your teeth into their pillowy soft cousin, get ready because they will blow your mind. Ricotta gnocchi are everything you never knew you were missing: They’re wonderfully light while also managing to be rich, decadent, creamy and flavorful.

Not to mention, unlike potato gnocchi (which are one of the most commonly botched of all of the Italian staple recipes), ricotta gnocchi can be made by anyone– and they only take 30 minutes! 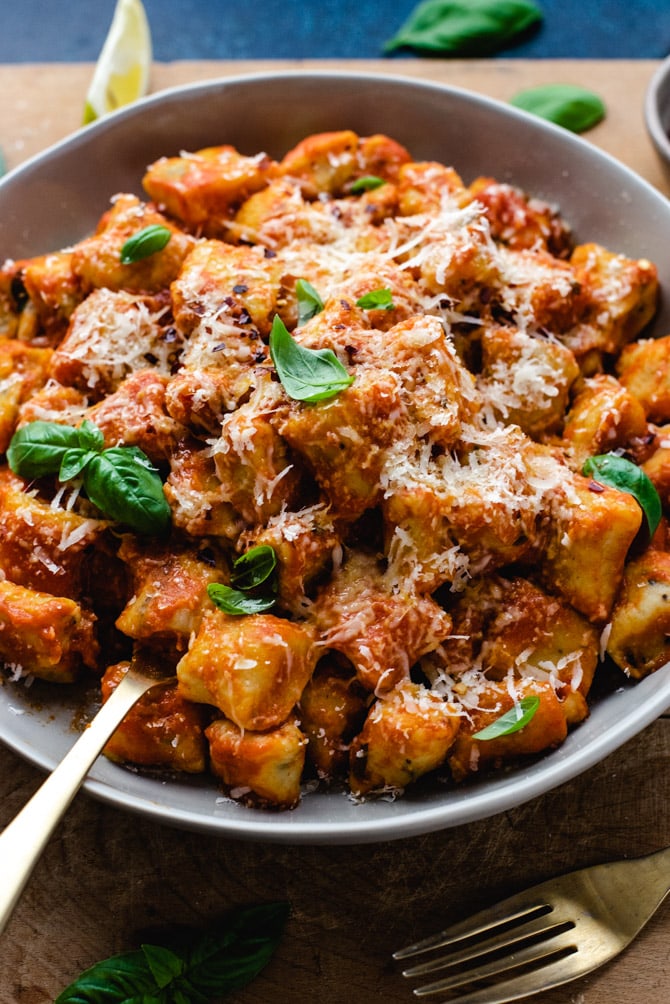 WHAT ARE GNOCCHI? WHAT IS GNUDI?

Gnocchi are Italian dumplings that are treated similarly to pasta. They can be made a variety of ways– the most common of which involves a dough of potatoes, flour, and eggs. The dough is then shaped into ropes, cut into roughly 1 inch segments, and then sometimes pressed over a fork, cheese grater, or gnocchi board to create ridges. The gnocchi are usually boiled until they float, and served with sauce, though they can sometimes be baked or pan-fried instead for different textures.

Gnocchi can also be made with ricotta instead of potato, which are sometimes called gnudi (roughly translatable to “naked” in Italian). Gnudi generally have a bit less flour in them, making them similar in texture and flavor to the ricotta filling of ravioli, but without the pasta wrapper. 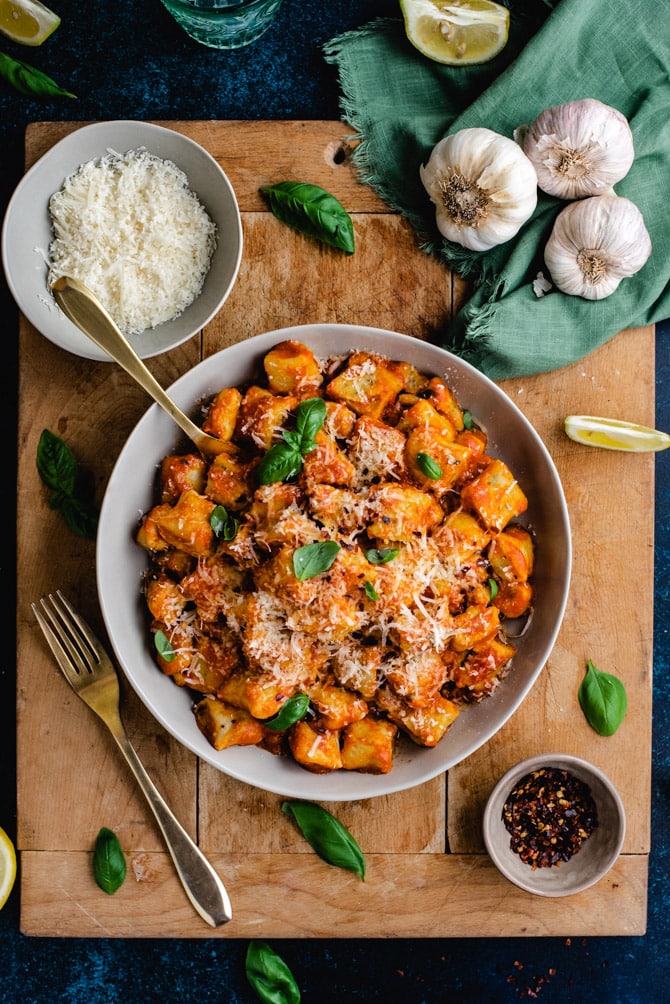 HOW TO MAKE THE BEST RICOTTA GNOCCHI

You don’t need any special equipment or even crazy ingredients to make ricotta gnocchi.

To get started, all you need is:

Plus any optional mix-ins you might want. Spinach is a popular addition, and I personally love to use aromatics such as basil, lemon zest, garlic, and so on!

To keep the gnocchi light and airy (and require the least amount of binding flour), it helps to first drain and blot the ricotta to remove excess liquid. I learned from Kenji at Serious Eats that a great way to do this is to spread the ricotta on a paper towel lined plate and blot it with additional paper towels before using it in the dough.

Once it’s been blotted, mix the ricotta in with the remaining ingredients to form a soft dough. Try to avoid adding too much flour or overworking your dough to get the lightest, fluffiest gnudi. But don’t worry if you’re not sure– ricotta gnocchi is incredibly forgiving!

Then, roll the dough into ropes and slice into small rectangles. 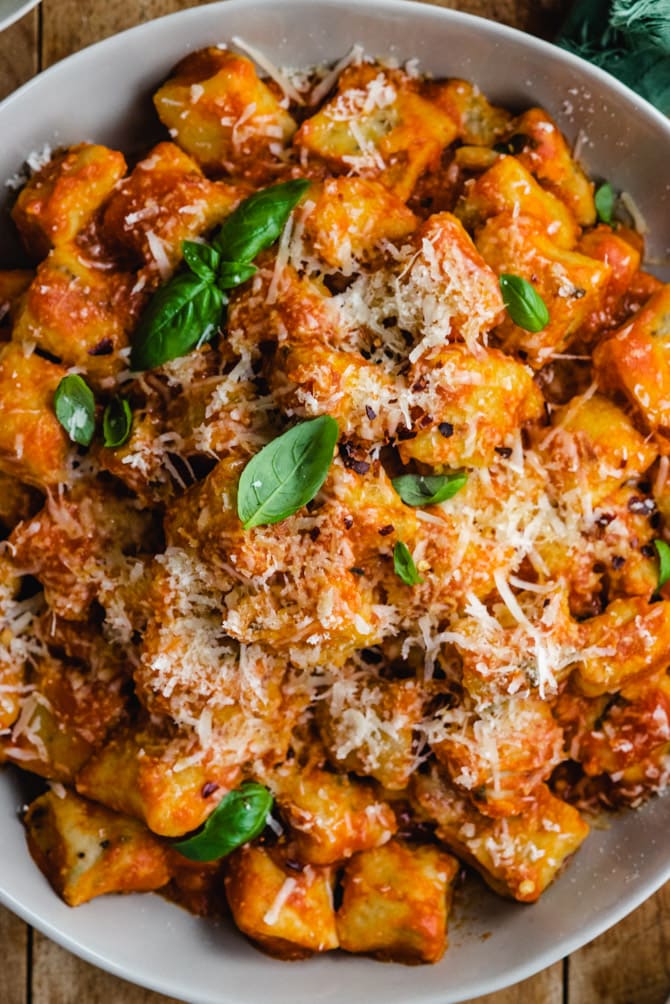 To cook your ricotta gnocchi (or gnudi, if you’d prefer), all you have to do is boil a little salted water in a large pot and then add the gnocchi– the same way you would any dried pasta. However, cooking the ricotta gnocchi actually takes less time than boiling dried pasta. You only have to boil your gnocchi until they float, which takes just 3 minutes on average!

After you’ve boiled them, feel free to add the gnocchi to any warm sauce you’d like. It helps to reserve a bit of the pasta water (or, I suppose “gnocchi water”) which you can add to your sauce for a better consistency and to help it bind to the gnocchi.

THE BEST SAUCES TO SERVE WITH GNOCCHI

I most frequently serve my ricotta gnocchi with a warm tomato sauce because it’s easy– I rarely don’t have a jar on hand or the ingredients to whip up a quick from-scratch version. However, you’re not limited! There are tons of options– here’s some inspiration:

And there are more ways to use gnocchi than simply tossing in a sauce. You can bake them in a lasagna-like casserole, saute them with bacon or sausage and your favorite vegetables, fry them, make a gnocchi pasta salad– heck, you could even use them in a spin on mac n cheese. Really any way you could use pasta, you could likely sub in this ricotta gnocchi! 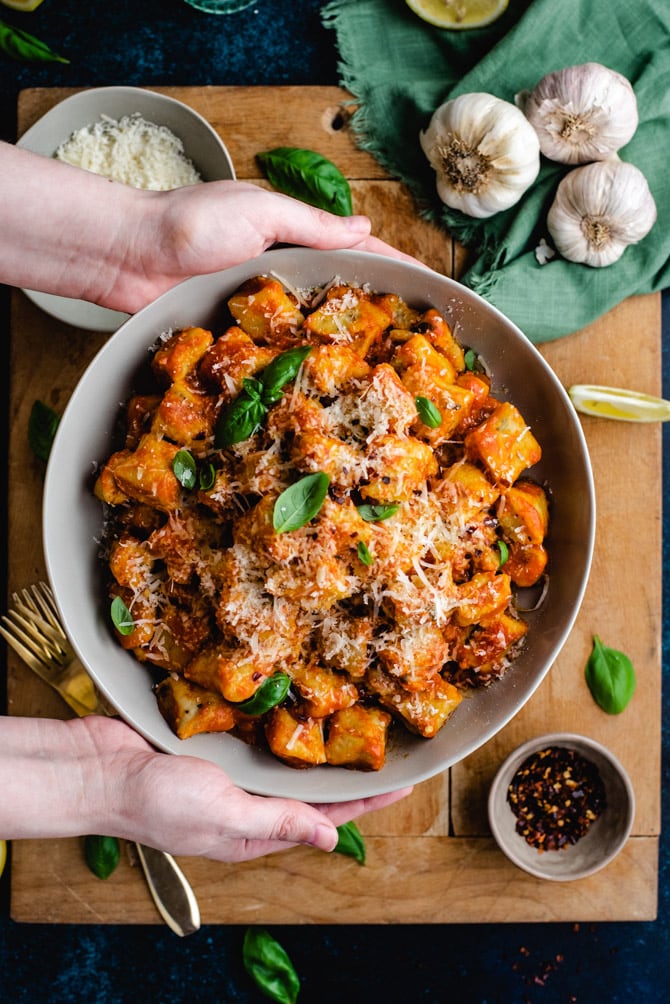 MAKE THE GNOCCHI IN ADVANCE

Sure, it takes less than an hour to whip these together from scratch, but why not make a big batch so you can always have some on hand? Gnocchi freeze surprisingly well!

Simply place the uncooked ricotta gnocchi onto a parchment-lined baking sheet and pop it in the freezer until the gnocchi is firm. Then transfer the gnocchi to a freezer bag and store until you’re ready to cook it. It will last in the freezer for up to 3 months.