A while back, I made a batch of Dark Chocolate Brownie Ice Cream Sandwiches that I meant to save for James and I to enjoy on one of the scorching summer days that I always complained about (and now miss).  I really tried to save them, I swear, but when a bunch of friends come over and stumble upon your stash of chocolatey goodness, you’ve gotta give ’em up.

James only got to try half of a Brownie Ice Cream Sandwich a few weeks later when I found one tucked away behind the ice cube trays, where no one could see it.  It only took half of an ice cream sandwich for him to fall in love the recipe. 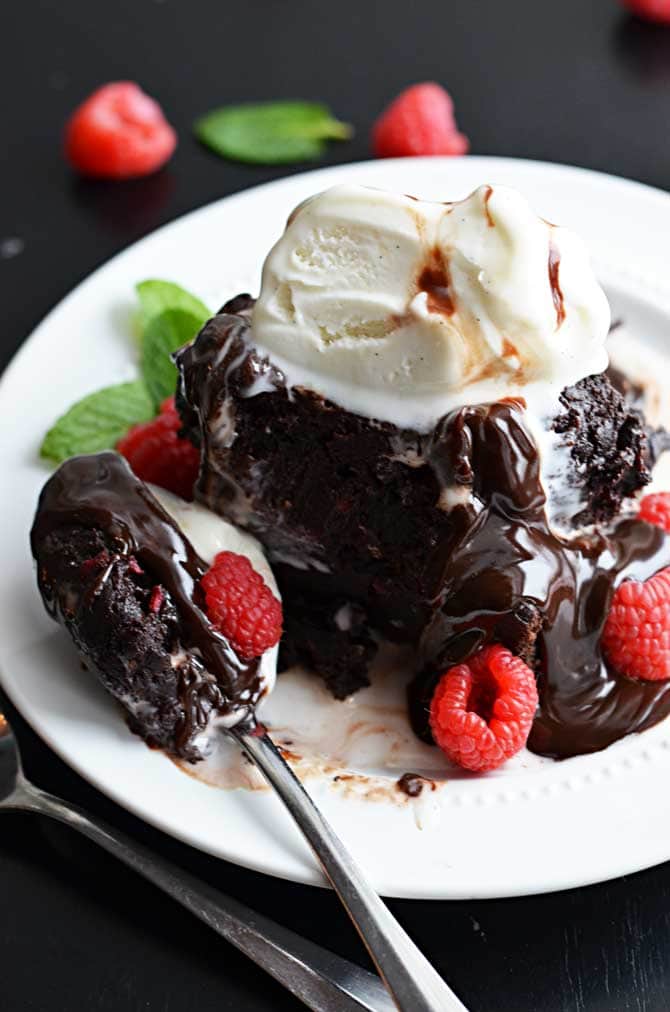 Ever since then, he has been begging me to make another batch, but I’ve been so busy cooking for the blog that I haven’t had the time to do a repeat recipe in a while.  He patiently waited and dropped hints and tried to think of ways to get me to make them, finally asking me, “Do you plan on making a cake for my birthday?  Because if so, don’t… Can you make me those Brownie Ice Cream Sandwiches?  With lots of raspberries?”

And guess what?  I still didn’t make them.  I’m terrible.

But not really, because I made something similar enough but maybe even better.  I made Fudgy Raspberry Dark Chocolate Brownies to celebrate his b-day.  Drool. 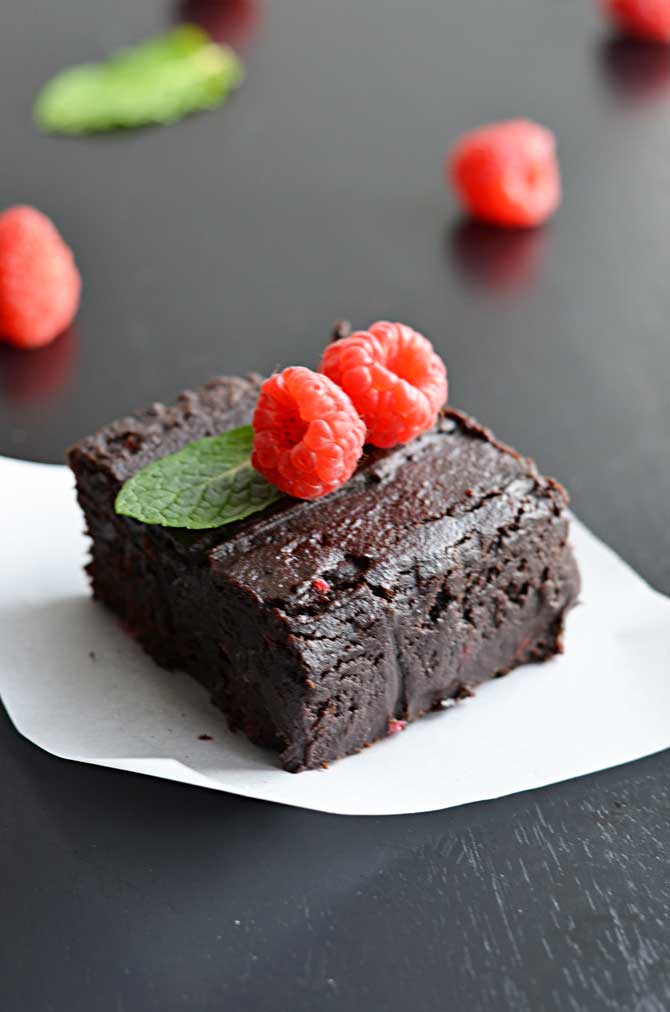 When I say fudgy, I mean fudgy.  You can tell from the picture that these babies were moist and dense and super chocolatey and AMAZING.  Tartness from the raspberries and raspberry jam, bitterness from the dark chocolate, and sweetness from the sugar all balanced perfectly for some ultra delicious brownies that were perfect birthday treats. 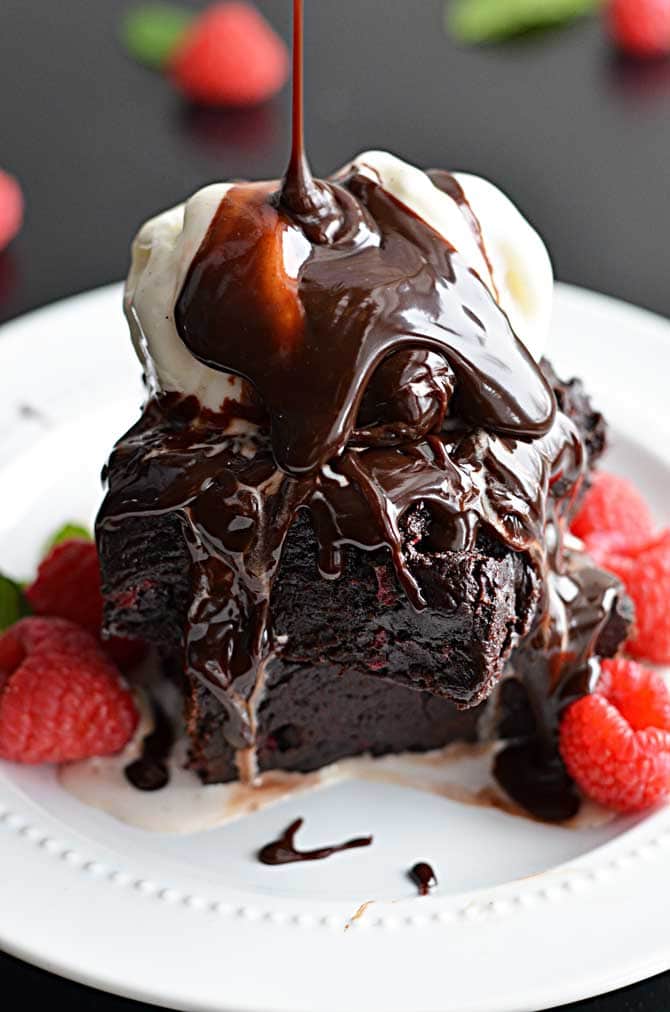 James loved them, especially after I made them “a la Mode” with a scoop of vanilla ice cream and some extra chocolate sauce to kick up the sinfulness just a little bit.  Hey, when it’s your birthday, you go big or go home, right?

My brother, Mark, actually got to taste test the Fudgy Raspberry Brownies a la Mode before James got his first bite, and he most certainly approved as well.  Here’s a picture I snapped of Mark digging in. 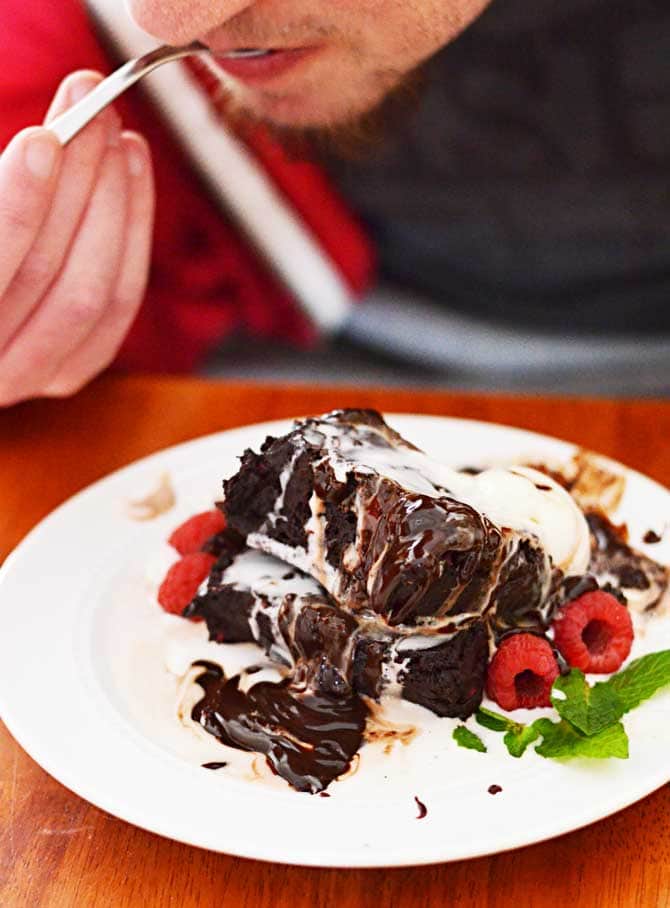 If that doesn’t make you want these brownies, I don’t know what will.  I’m practically salivating on my keyboard as I write this post.  I don’t have much of a sweet tooth, but these are an exception.  And I’m sure James will be begging for another batch soon.