Grilled Peach and Halloumi Panzanella. This summer salad includes a mix of quickly grilled peaches, halloumi cheese, and ciabatta bread croutons that are tossed with fresh basil, red onions, and a simple white balsamic vinaigrette. It looks and tastes fancy, but it only takes less than a half-hour to prepare! 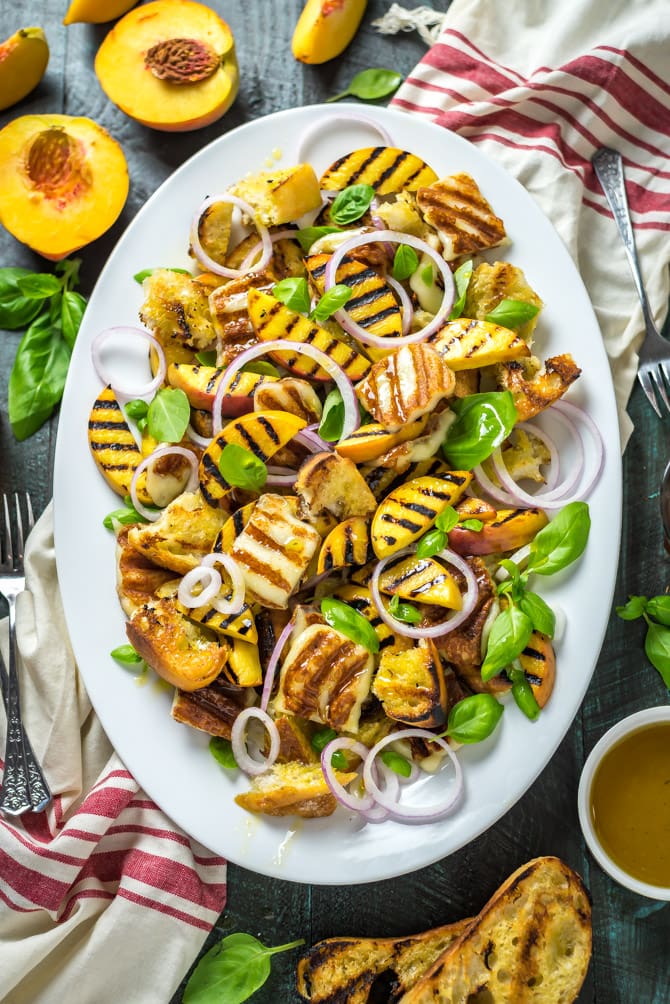 I placed this platter on the table with the type of pomp you’d expect from Martha Stewart’s personal protege, not a frazzled 20-something-year-old who hadn’t found the time to clean that day but decided to have friends over for a cookout regardless. I was proud of it. It didn’t bother me that there was an unsorted stack of mail and magazines smack dab in the middle of the kitchen island, where some people would display a nice centerpiece. I didn’t care that I’d been locked up in my office taking pictures for the 20 minutes since my friends arrived.

The pretty plate of panzanella still made me feel like a good host. A fancy host, even if things were in a bit of disarray.

But then I looked up at my friends, and they did not look excited. Their faces were all screwed-up as they stared at the dish, which I’d thought looked lovely with its perfect grill marks, fresh basil, and juicy peaches.

“That… that’s a grilled cheese?” 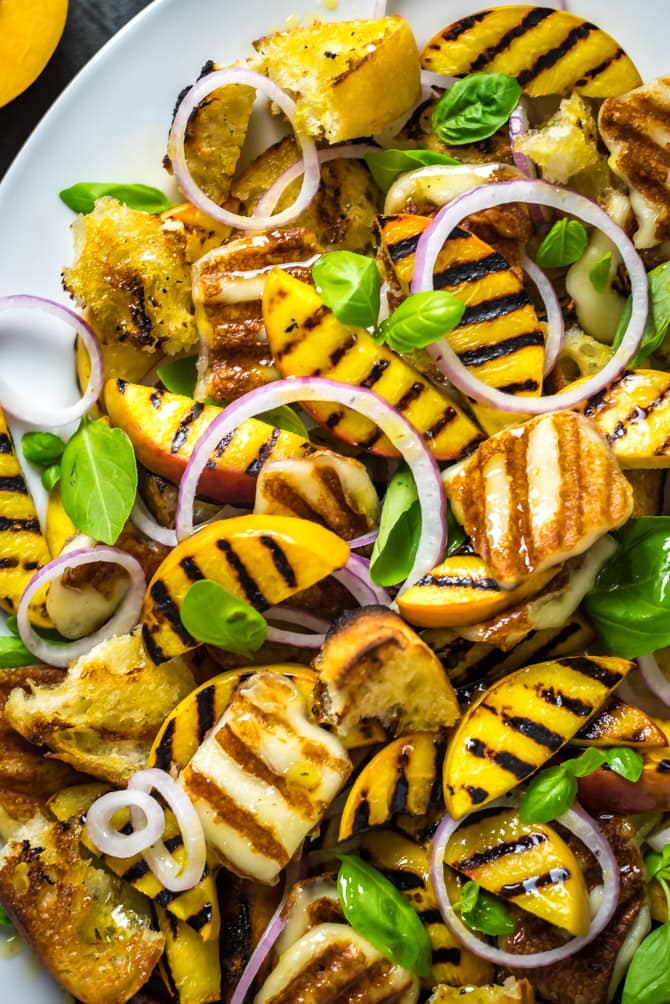 OH. Well that explained it.

Right as I was running back to take pictures, I’d told my friends that I was shooting “Panzanella with Grilled Peaches and Halloumi.”

Thinking that they were asking about the halloumi, I yelled back from the other room,”It’s grilled cheese”. You know, literally– as in cheese that I cooked on the grill. That’s definitely not what they thought I meant. So they’d been expecting me to walk out with some sort of grilled cheese sandwich party appetizer, not a summer salad with fruit and herbs. My mistake.

But they got over it after some explaining, and they finally tried it.

And even though they were apprehensive at first, and maybe a little confused (once again) by the combination of peaches and cheese, after a few bites, they were on board. Like, so on board that they didn’t stop spooning more peach panzanella onto their plates. Not even after James had brought the grilled burgers and dogs inside. 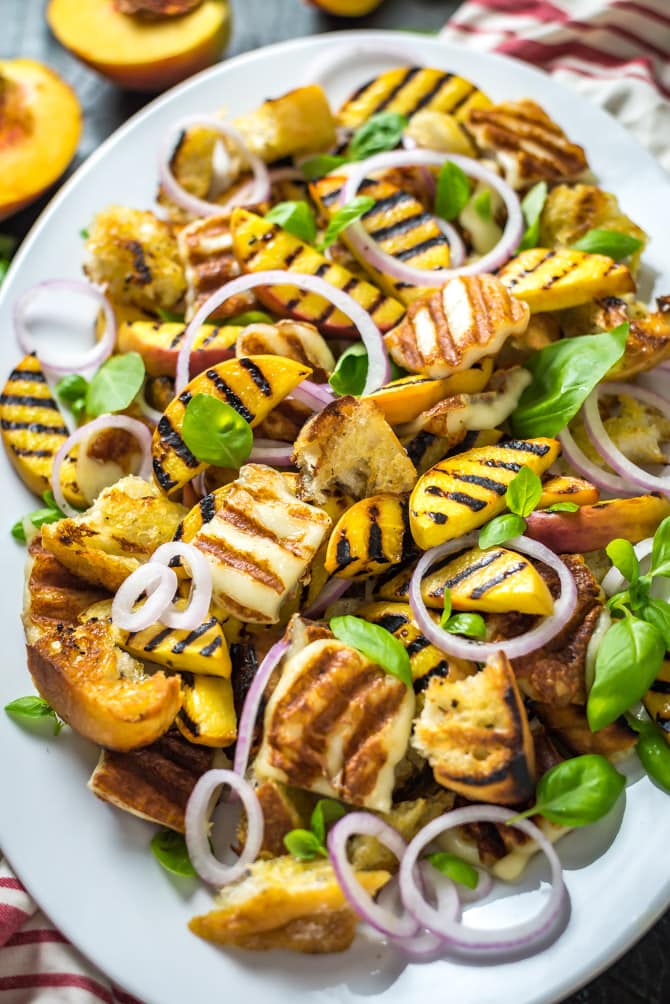 For example, unlike your typical panzanella, it doesn’t involve any tomatoes– I use fresh, ripe peaches instead.

Rather than just throwing them in the salad, a quick trip to the grill brings out their sweetness and deepens the flavor of the salad. The peaches aren’t the only ingredient that receives some gorgeous grill marks, either. Instead of waiting for stale bread to use in my panzanella, I grill up slices of ciabatta until it’s just beginning to char, and then I tear it apart to form the croutons.

And then, of course, there’s the “grilled cheese”. It’s not unusual to pair fruit and cheese; almost every decent cheeseboard will have some sort of fruit– fresh or dried– included. But you’ll typically see stonefruit served with blue cheeses or goat cheeses or maybe cheddar. Halloumi is a little less common of a pairing, simply because less people know about it. Halloumi’s got the flavor of a saltier mozzarella, but it’s got a very high melting point for a cheese, so it can be pan-fried or grilled to develop a great crust without melting into the abyss below your grill racks.

Trust me, if you haven’t tried halloumi yet, you’re going to want to run, not walk, to the grocery store and get this recipe started. Salty halloumi and sweet peaches are a combination too good to miss out on. Add in that ciabatta, some spicy red onions, fresh basil, and a light white balsamic vinaigrette, and you’re truly getting a little bit of every flavor in each bite. 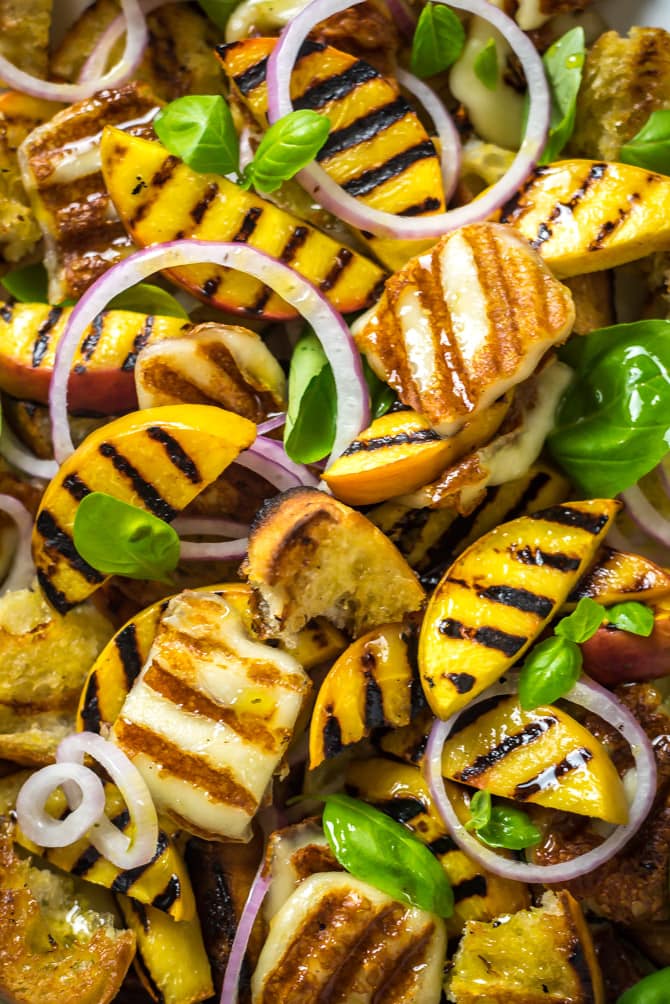 The fact that this was, in fact, Grilled Peach and Halloumi Panzanella (and not a sandwich) was a surprise to my friends, but the fact that they loved it was even more shocking to them. Rob, who maybe was the most hesitant to try it, wound up hovered over the salad until it was gone, repeatedly asking, “Why is this so good?”

Because it’s got it all, Rob.

“This is way better than a grilled cheese.”