Considering that I was obsessed with roasted red peppers for the first few years of learning to cook, I can hardly believe that I have included just one lonely recipe that uses them as an ingredient since starting this blog.  In fact, obsessed might be an understatement here– it was extremely rare that I ever made a dish without them. 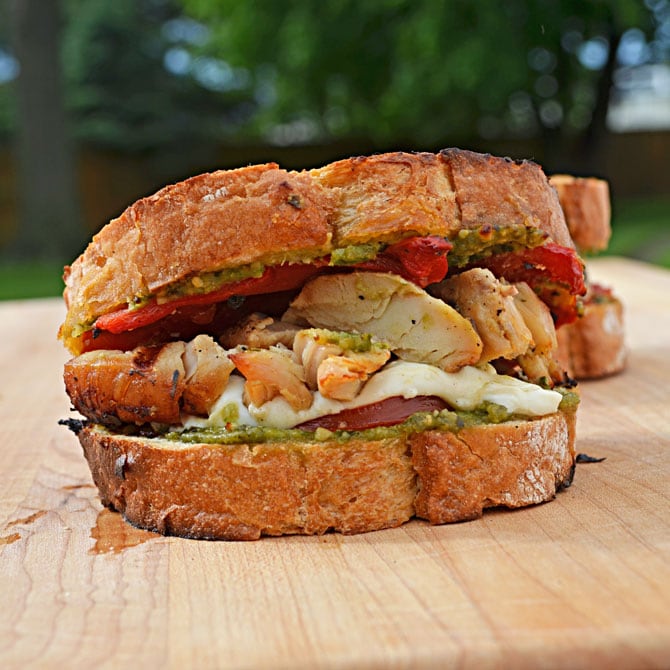 It all started in college, when I had just started dating James.  Only a few months before, I randomly decided– as I often do– to master a new hobby, as drawing, painting, writing, altering clothes, kickboxing, web designing, and playing the piano were beginning to bore me.  (That’s not to say I abandoned any of these hobbies entirely, but I just needed to move on to learn something new.  I’m a restless skill-hoarder.  It makes it impossible for me to balance my efforts because I’ll decide important things such as functioning like a normal human being are less urgent than becoming, say, the ultimate master champion of ukulele playing, and nothing can possibly take a wink of time or attention away from that goal.) 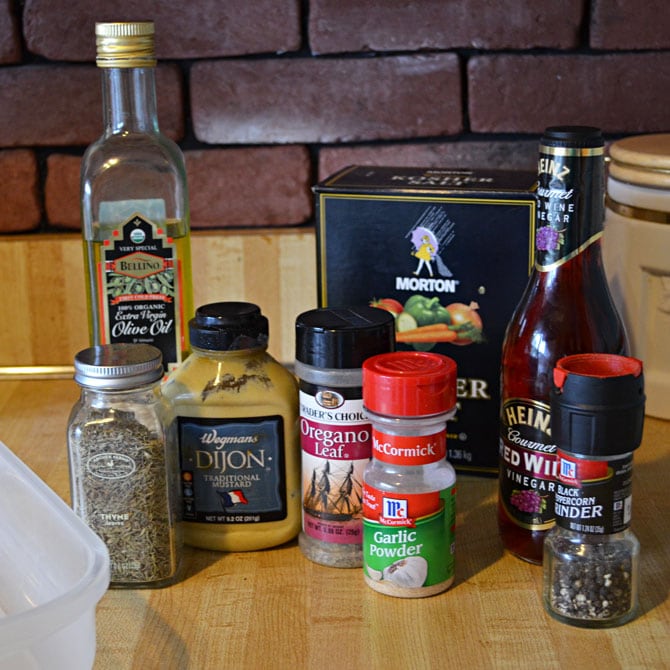 The hobby I decided to pick up was cooking, and I quickly spiraled into “nothing matters besides making delicious food” mode.  I constantly had people over for dinner, and my boyfriend was lucky enough to be my taste-tester every single day, often more than one meal a day.  For unknown reasons, I refused to cook any protein that wasn’t poultry or seafood at the time, but since James is a fishophobe, chicken was on the menu every night. 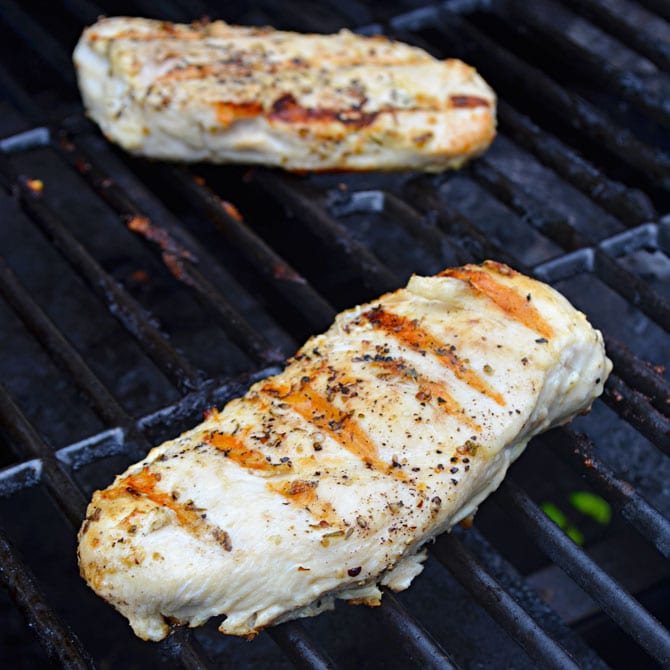 “Chicken, you say?  I thought this was about roasted red peppers?”  It is.  You see, while there are thousands of creative ways to cook chicken, I believe that people who are learning to cook tend to go through flavor eras.  Just like Picasso had his Blue Period, I had a Mediterranean Period.  Every single chicken dish I made included at least 3 of the following ingredients:
Garlic, mozzarella, feta, roasted red peppers, pesto, olive oil, balsamic vinegar, and/or spinach.  That’s it.  That was my whole cooking repertoire for at least 6 months.  And I should clarify that the roasted red peppers were never the ingredient to be left out. 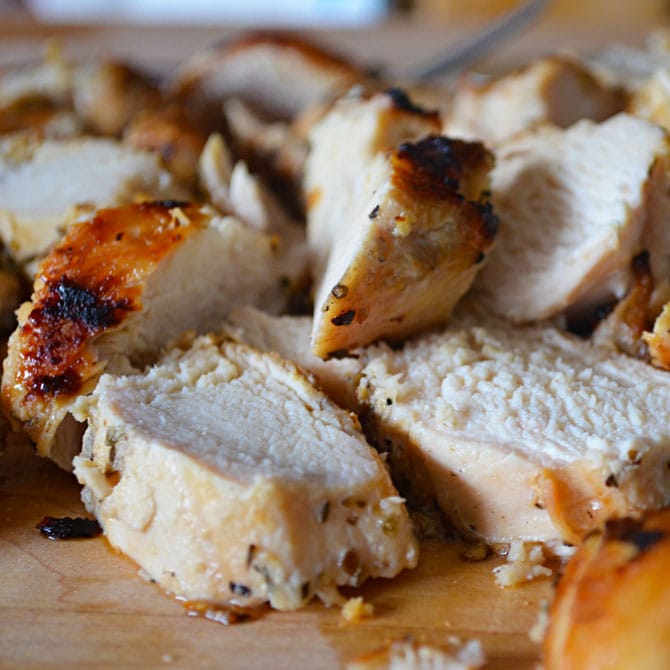 James never complained, (mainly because he loves those flavors just as much as I do,) and he still gets excited every time I tell him I’m making something with roasted red peppers.  I should clarify, though, that I was able to come up with some pretty awesome and surprisingly diverse meals using those main ingredients (hello, Pasta Greco) which is why it’s absolutely ridiculous that only one of them is on this blog so far!  Well, now it’s two, I suppose.  I had to end this appalling injustice before it got out even more out of hand. 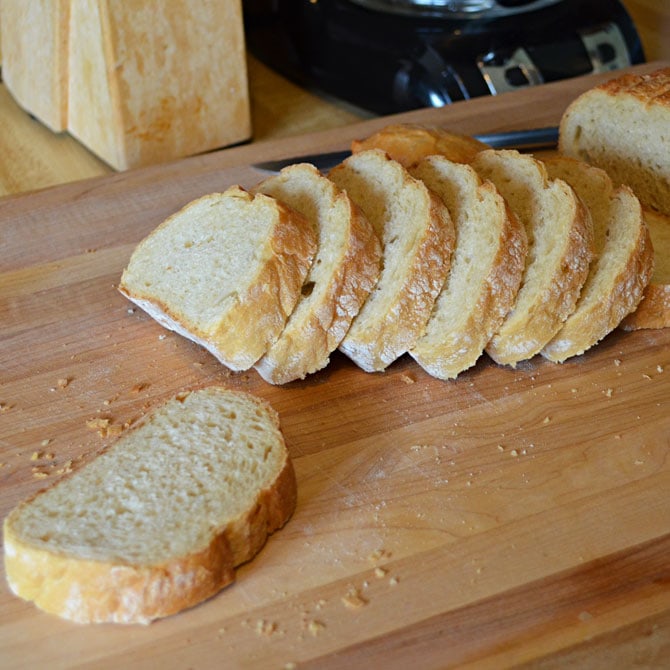 Here’s the breakdown for these sandwiches:  you make the best simple marinade ever created for chicken, let it sit overnight, and then grill it up.  Chop it, and pile it on fresh Italian bread with a liberal amount of pesto, mozzarella, roasted red peppers, and tomatoes.  Bring it back to the grill and toast both sides until the mozzarella begins to melt and the bread is nice and crispy.  Ta-da!  If you don’t have a grill, don’t worry.  You can make these in a frying pan or in the oven and they still taste delicious. 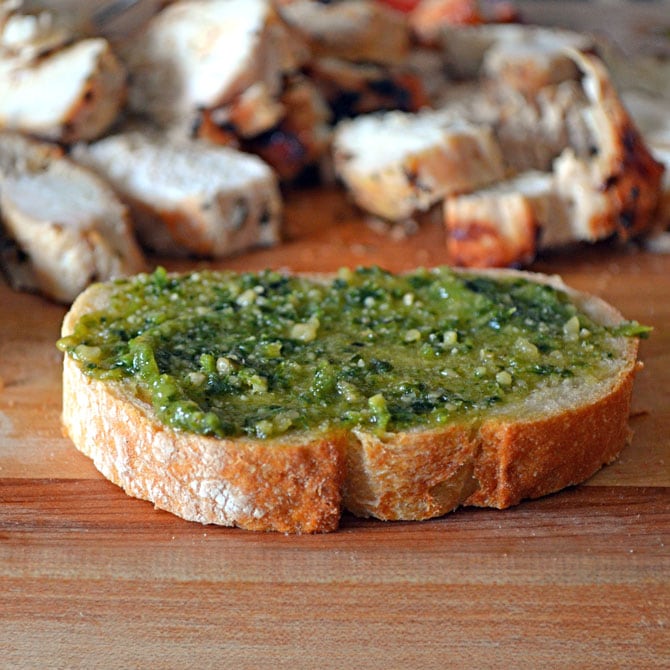 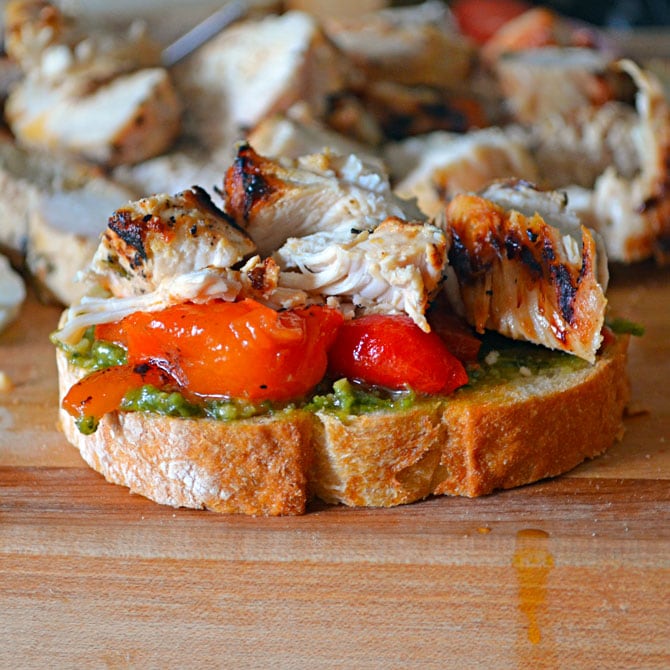 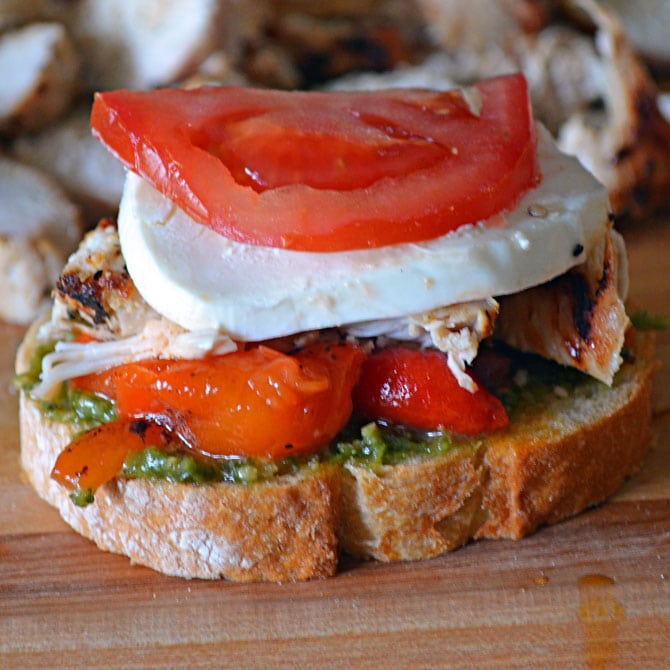 These sandwiches are great for every occasion.  The thick grilled bread helps them travel well for picnics, tailgates, and outdoor events without becoming soggy, and the ingredients all taste wonderful whether they’re hot, cold, or room temperature.  I’ve never met a person who didn’t like them, and they fly off of the serving tray when I make them for get-togethers.  Best of all, they’re simple to make, so whether you want to whip one up for yourself, a few for your family, or dozens for a big party you’re hosting, these are stress-free and foolproof! 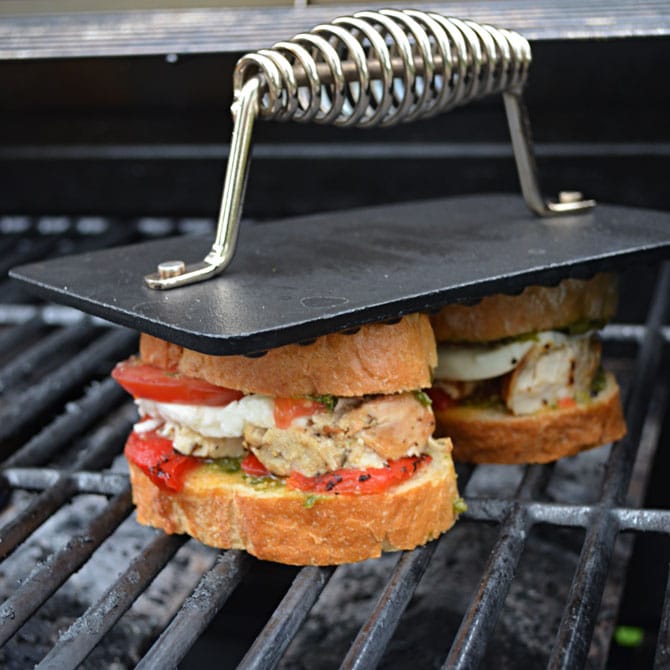 If you’re looking at the picture above and thinking, “Oh no!  I don’t own one of those cast iron grill press things, so I can’t make this!”  don’t worry.  If you don’t have one, just press down on the top of the sandwich with a spatula to force the sandwich ingredients together as they cook.  Either way works perfectly fine! 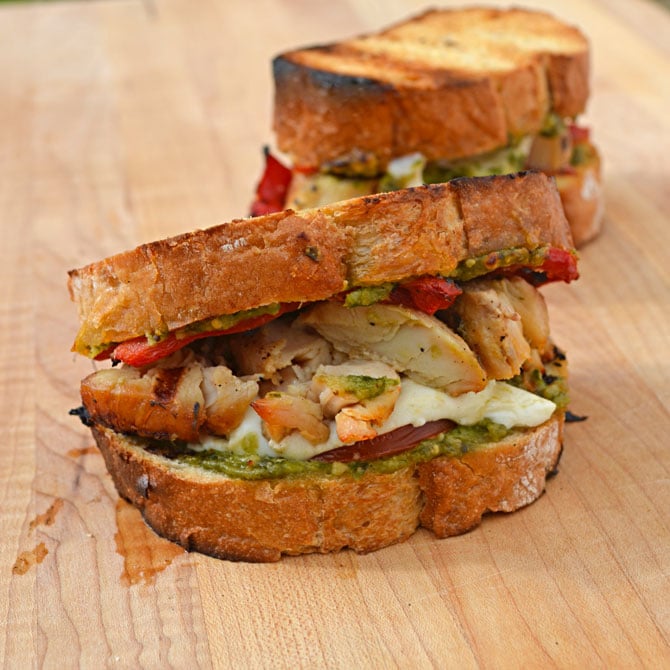 Give it a try.   Your tastebuds will thank you.