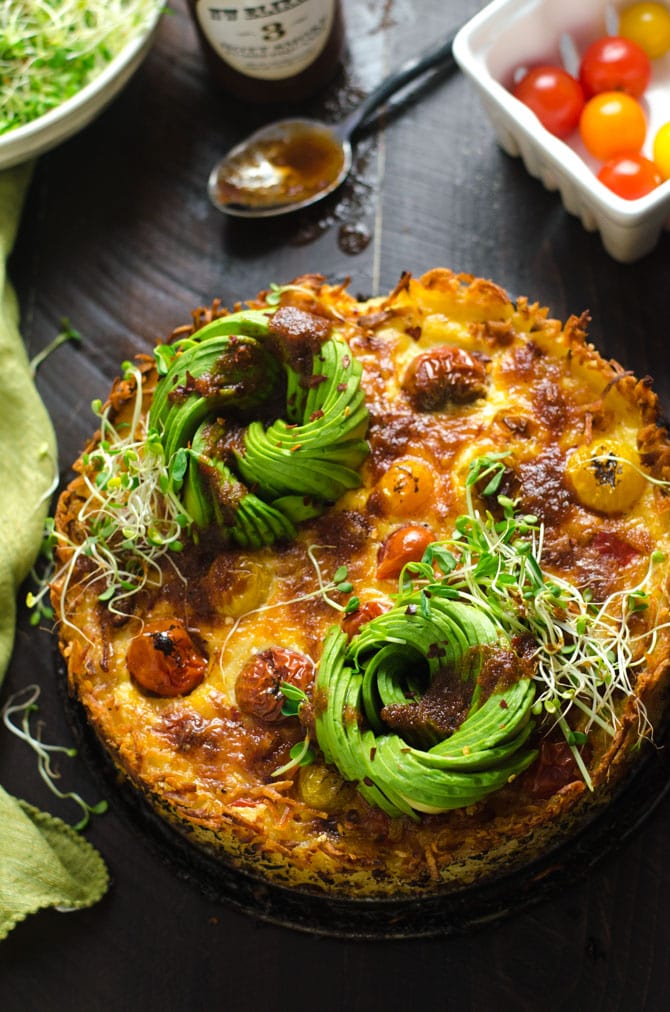 I’ll admit it: I’m a notorious breakfast-skipper, which makes me seem like maybe not the most likely person to recommend recipes meant to be eaten in the AM hours. However, on the occasions when I decide that a cup of coffee on its own won’t suffice, I’m your go-to morning meal girl. I go all out.

Case in point, this Hashbrown-Crusted California Quiche with Avocado Roses. I’d like to thank all of my fellow Instagram-addicts for the inspiration– your billions of documented brunches, avocado rose toasts, and California-style sandwiches have had me drooling non-stop for months. Naturally, I decided to combine them all. I mean, you know me. Is that really surprising? 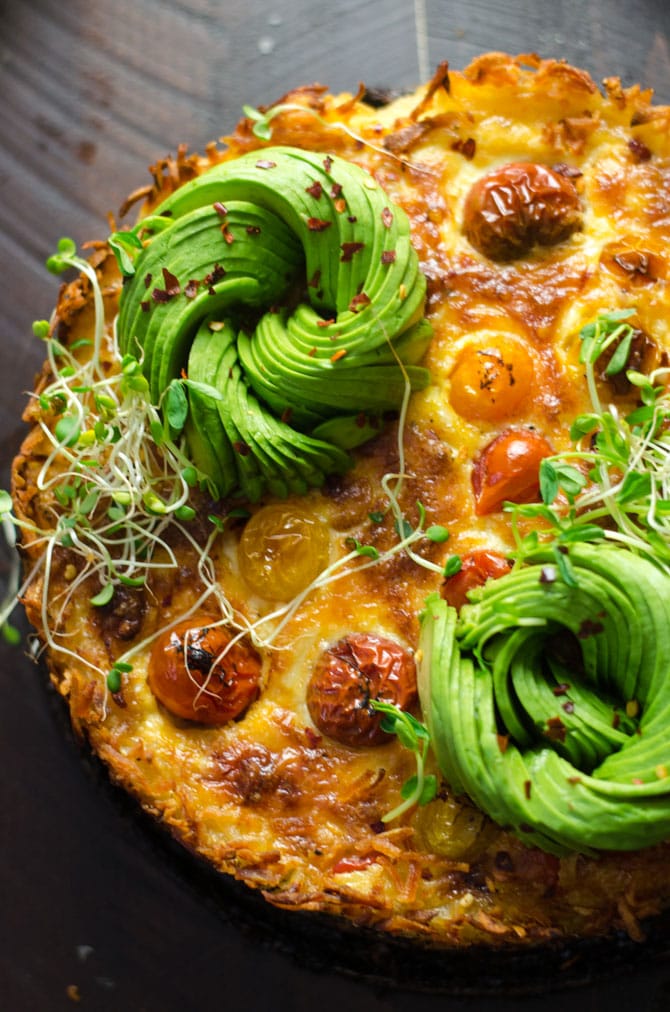 The components of a California sandwich can vary depending on who you ask, but they almost always include tomato, sprouts, and avocado. The best ones (in my opinion) also incorporate bacon, onion, bell pepper, or monterrey jack cheese. Or even better, all of the above. And you know what all of those ingredients go great with? Eggs. Creamy, custardy eggs. You know, like the kind you’d have in a perfectly baked quiche.

Oh, and hashbrowns. Did I mention those yet?

So, typically, the eggy portion of a quiche is contained by a pie crust, but I wanted to kick it up a notch so I swapped out premade pie crust for frozen hashbrowns! All you have to do is defrost the hashbrowns, mix them up with a little butter, press them into your springform pan or pie plate, and bake until lightly golden. Easy and delicious. 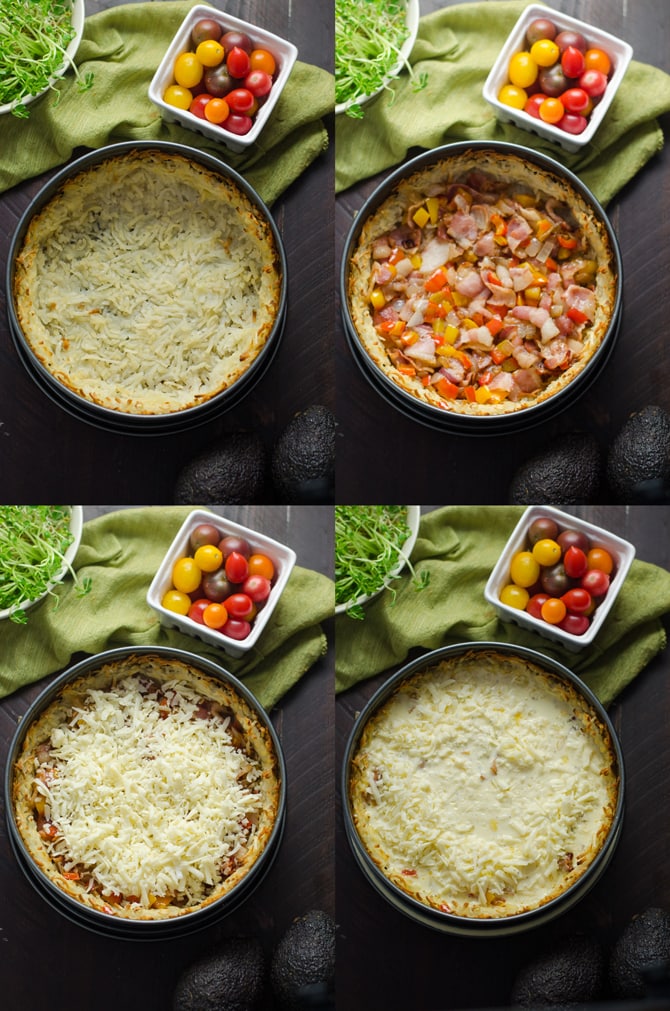 After the hashbrown crust is baked, I saute the bacon, onion, and bell pepper, and place them over the crust. Next comes the shredded cheese, and then I pour an eggy custard mixture over top. I could pop it in the oven just like this, but why stop there? It’s all-the-more delicious with a few cherry tomatoes plopped right on top. Finally it’s ready to bake until lightly browned on top.

Many recipes advise you to bake quiche just until it’s set (and still pale on top!), but with the extra moisture from the veggies, cheese, and bacon in the quiche, we’re able to leave it in just a little bit longer without overcooking the eggs so we get that gorgeous golden and slightly bubbly top layer. I just love it. 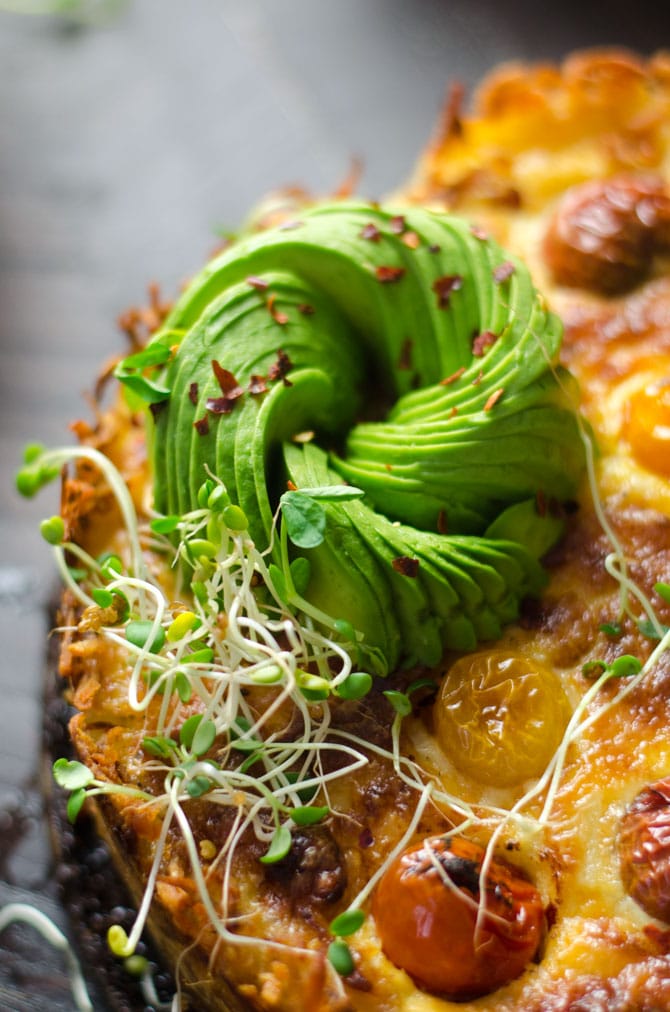 Did you notice that I left out the avocado and sprouts thus far? Well, those beauties are for topping.

To make avocado roses (or swirls, if you’re looking at mine, which admittedly aren’t super flower-like), I halve, pit, and peel a just ripe avocado, and then thinly slice it.  Okay, in the photo above I used a very ripe avocado, since that’s what I had on hand. Don’t you feel like it’s almost impossible to get an avocado that’s perfectly within in that ripeness window? Try to defeat the laws of produce and find one that is ripe, but still very firm. Otherwise the slices can smush together, which makes it difficult to shape!

After I’ve sliced the avocado halves up, I then. put some slight pressure on the sides of the avocado slices so that they fan out in a line. At this point, I’m able to curl one of the ends inward slowly until the whole avocado is spiraled together in a cool, rose-like shape. I was nervous to move mine when I made them the first time, but if you use a spatula to place them, you shouldn’t have any trouble at all. It’ll be almost as if you made them right on top of the quiche to begin with. 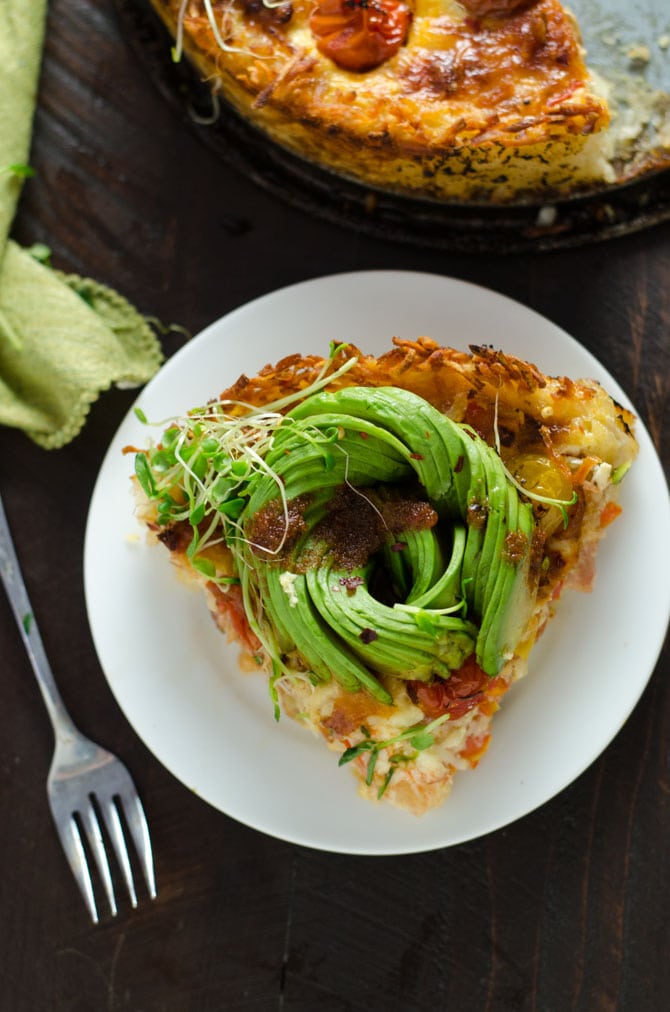 I like to top my avocados with some crushed red pepper flakes and surround them with some sprouts before digging in. The little touches really bring the whole Hashbrown-Crusted California Quiche with Avocado Roses together.

And then it’s time to eat! … Almost. There’s just one more thing: If you’re a heat-freak like me and your favorite way to eat eggs is when they’re loaded up with hot sauce, then this is the time to do it. I recently participated in a condiment exchange on reddit and received three awesome NW Elixirs hot sauces, so I’d been dying to try them out. I drizzled the chipotle one (Hott Smoke #3) on top of my quiche and it was AWESOME. Thanks again to my reddit “Santa” for sending it to me! You’re seriously the coolest. 🌶 😎 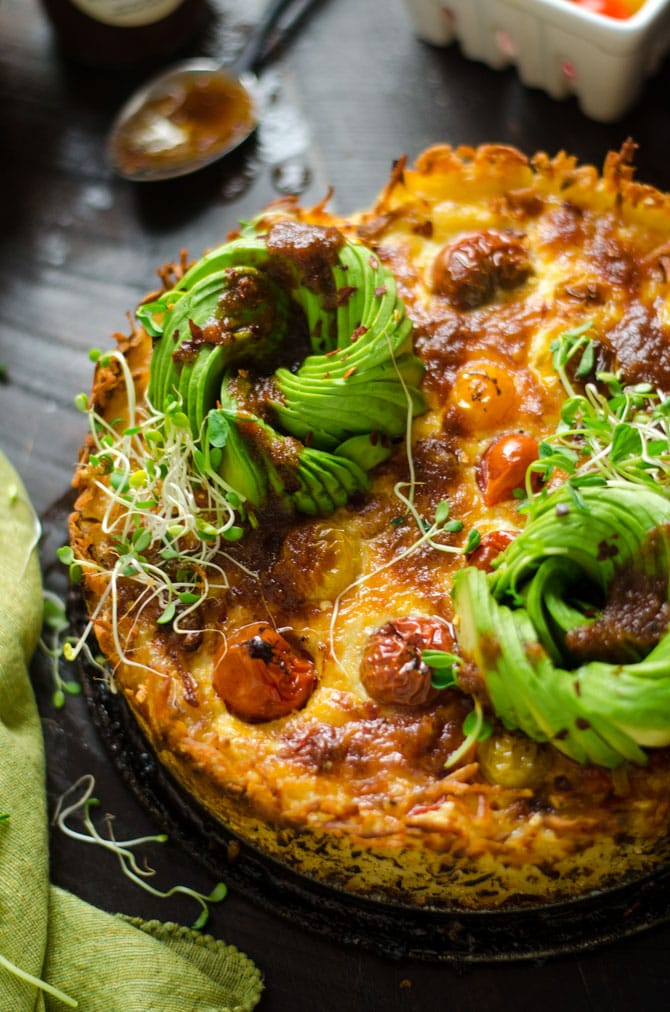 I told you I go all-out when I actually decide to make breakfast, didn’t I?

This Hashbrown-Crusted California Quiche with Avocado Roses isn’t just great for breakfast, though. It’s perfect for your next Sunday brunch, Fall picnic, or even family dinner. You could really make it any time of day or for any occasion– just make sure you take a photo before you eat! Tag #hostthetoast on Instagram and it will show up on the You Made It page. I bet your avocado roses will be gorgeous. (And delicious.)

For the Hashbrown Crust:

* Note: If your springform pan does not seal tightly at the bottom, you may want to wrap the bottom with foil to avoid the egg from leaking out.