If warm, fluffy, poofed, and perfectly-pocketed pitas are what you’re looking for, it doesn’t get better than this recipe for Homemade Pita Bread. They’re surprisingly simple to make and leagues better than the store-bought stuff! 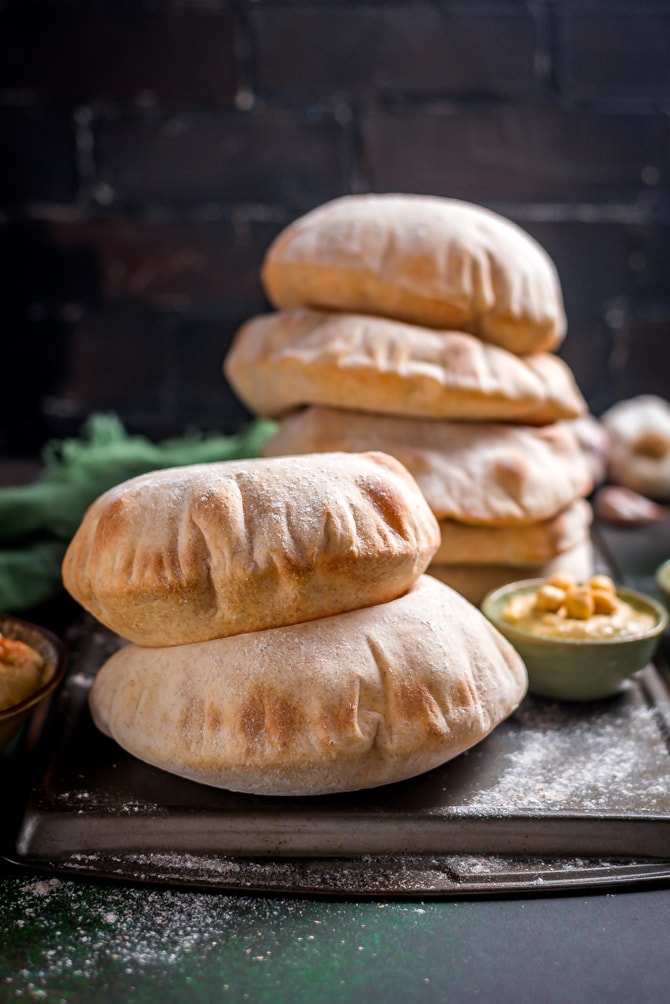 Before stumbling upon my first go-to pita recipe, I’d already been dreaming about making it for years. There’s just something about the warm and steamy pita you get fresh from the oven at Greek restaurants that makes you want to grab your apron and do away with the store-bought versions forever. I’d always assumed, though, that Homemade Pita Bread was not a venture for the inexperienced breadmaker. And I was most definitely inexperienced.

Still, I eventually decided to battle my way through my first batch, and much to my surprise, it wasn’t much of a battle at all.

I shared that recipe here– the one I used for my first batch and continued to use for years– back in 2015. It was a good, trusty recipe, and if you’re here because you used to make it, you can probably attest to that. However, over time, I began to think that I could do a little better. Maybe I could make them just slightly easier to prepare. Slightly more tender. Slightly fluffier. Maybe I could give them that edge of nuttiness that the best pita tends to have.

And so, at the beginning of the summer, I decided that it would be a great time to start experimenting again to make the best Homemade Pita Bread. A few months of heating my house up with my oven set to nearly 500 degrees and (literal) hundreds of pitas later, I can confidently say that I’ve finally got it figured out.

Not going to lie, it was an uncomfortably sweaty and not very diet-friendly experience, but I’m used to that by now. At least it was worth it. 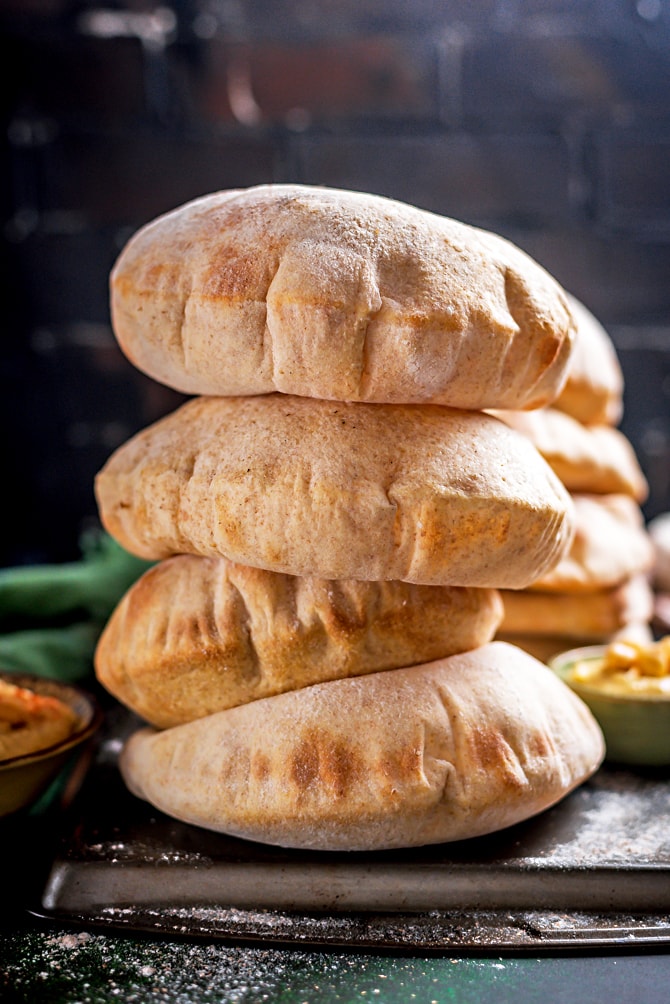 Some breads are fine to buy at the supermarket, but pita– which is pretty much never baked in-store– isn’t one of them. Fresh pita is fluffier, more tender, more flavorful, and just-plain-better than store-bought. In fact, after making your own pita, you’ll begin to realize just how stale store-bought pita tends to taste! With fresh pita on hand, you’ll find yourself swapping them as your new favorite base for everything from sandwiches to pizza to garlicky feta dip.

Luckily for all of us, you don’t have to be a natural baker to nail a perfect pita. All you need is 2 hours, 6 ingredients, and a little confidence, making this recipe a no-brainer for first-time breadmakers. So do yourself a favor and ditch the store-bought hockey pucks. Once you try them, you’ll never go back! 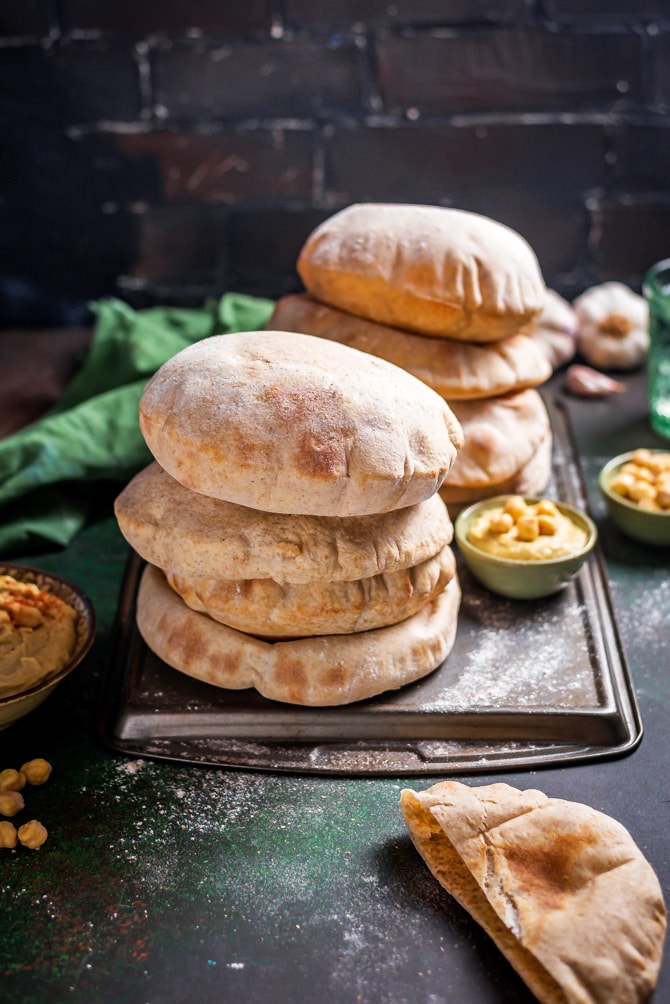 Or should I say…deflated? Dad jokes aside, it’s easy to assume that pita-making is some sort of mystical art, full of secrets we mere mortals aren’t privy to. Easy, but so, so wrong.

As a friend, I’m here to tell you not to believe the hype, lest you deprive yourself of one of life’s greatest joys – a warm, fluffy pita fresh from the oven.

“But It’s So Much Work!” Or is it? As I mentioned above, before making my first batch, I was prepared for all kinds of pita pitfalls. Extensive kneading, the pocket never popping, finding out I needed some fancy equipment. All myths! It was the easiest dough-based dish I’ve ever made, and despite never making pita before, I got it right on the first try. You can too!

“I Still Don’t Have the Time.” That’s the beauty of pita. While this recipe technically takes an hour and forty minutes, more than half of that time is hands-off waiting for the dough to rise. Prepare the rest of dinner, get some cleaning done, or just kick back with a podcast. If 2 hours still seems long, think of it as a one-time investment. Because the dough is freezer-friendly, you can double or triple the recipe and have no-prep pita for weeks. (More on that later.)

“Working with Yeast is Scary.” You’ll just have to trust me on this one. You’ll be fine as long as you remember the three cardinal rules of working with yeast:

If you do have a mishap, don’t get frustrated. Yeast is cheap and easy to find, so take a breath and the second time’s the charm.

“What if It’s Ugly?” Okay, now we’re running out of excuses. If you can get your pitas to be perfectly round, more power to you. But personally, I don’t mind a slightly uneven edge. It gives them a bit of “homemade” character, and your family and friends will be too busy stuffing their faces to care! That being said, it’s really surprisingly easy to make a pretty pita. You’ll probably surprise yourself.

Got it? Good. Now let’s get started. 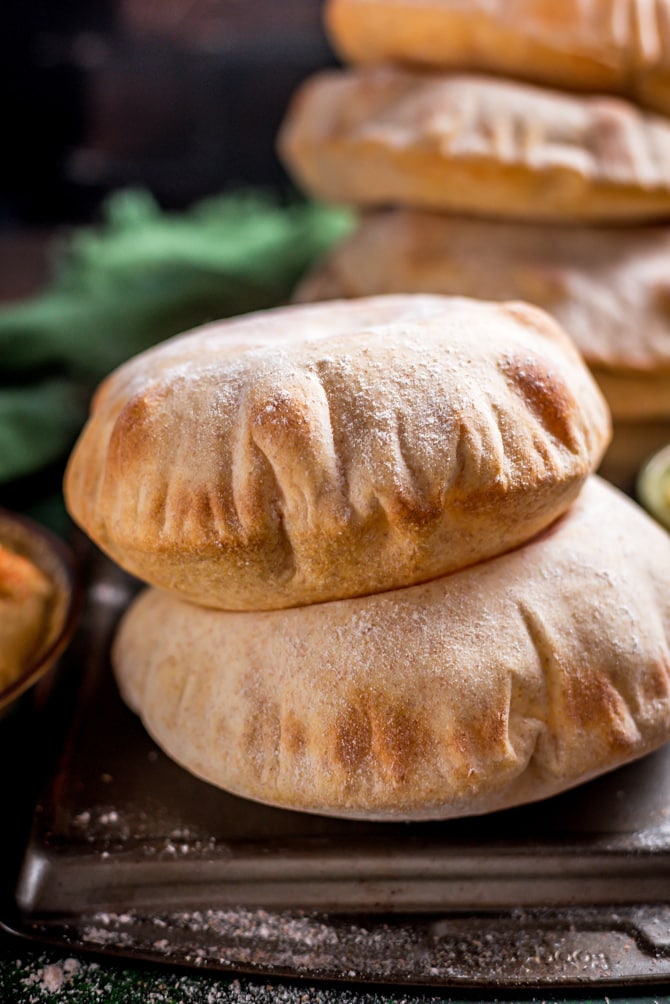 The simpler a recipe is, the more I become obsessed with fine-tuning it and making sure it’s the absolute best it can be. Pita has no strong flavors, no fancy plating to hide behind, so the difference in quality comes down to a small tweaks that go a long way: 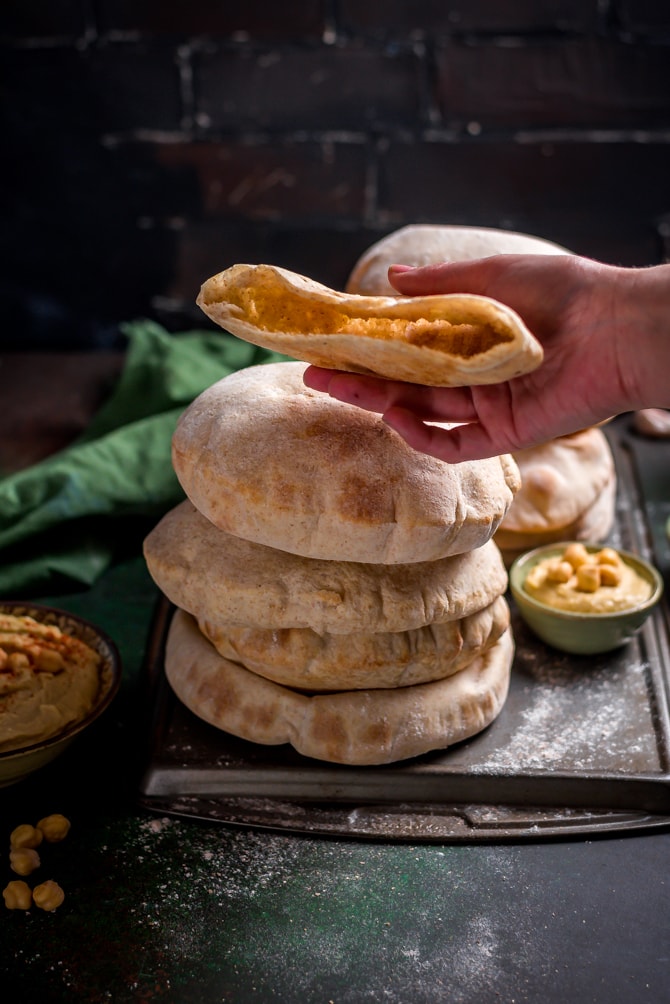 MAKE THEM AHEAD OF TIME

Fun fact: many store-bought pitas have already been frozen and thawed without you ever knowing. Pitas are doubly freezer-friendly because you can store the dough raw or cooked. I particularly like keeping some around to give leftovers an easy weeknight makeover or whip up a pita pizza on-the-fly.

If you’re intentionally prepping extra dough to have on hand, freeze it after it has risen like you would with pizza dough. If you’ve already baked your pitas and end up with leftovers, just store the cooked rounds in freezer bags and thaw them on the countertop before reheating in the oven.

Either method of freezing homemade pita bread will give you an infinitely fresher taste and texture than the grocery store imitators.

RECIPES TO PAIR WITH YOUR PITA