Honey-Glazed Hasselback Butternut Squash With Parmesan Breadcrumbs. This fall and winter dish has it all: thin crisp slices, tender flesh, a sweet and garlicky glaze, and crunchy pistachio and parmesan breadcrumb topping.

This recipe for Honey-Glazed Hasselback Butternut Squash with Parmesan Breadcrumbs was also featured on Serious Eats. 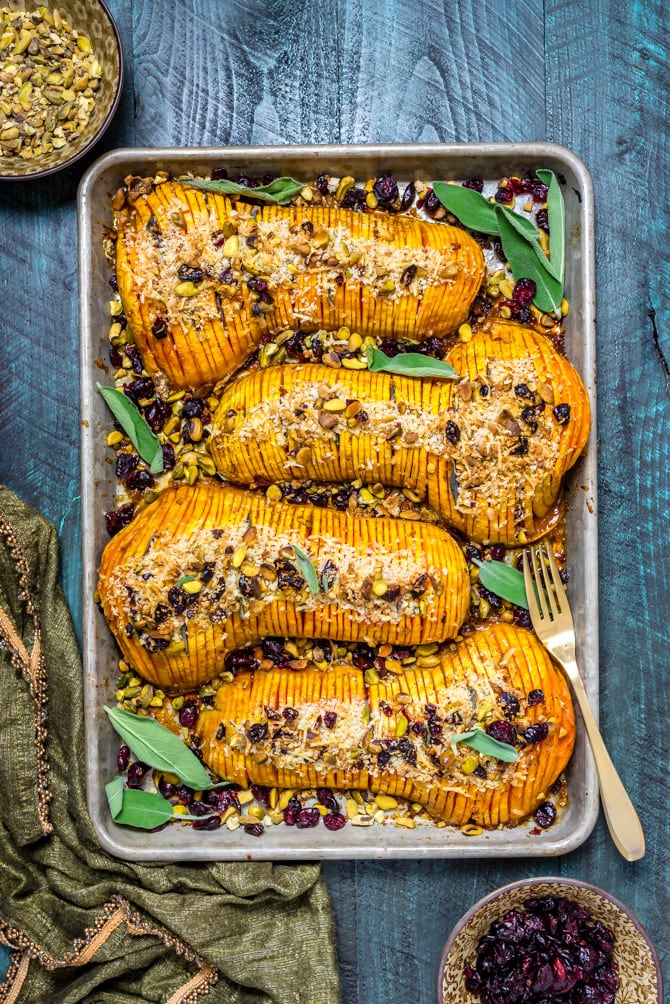 Four years ago, a surge of recipe videos, Buzzfeed-style listicles, and blog photos filled our social streams with visions of crispy, fanned out baked potatoes. I like to call it The Great Hasselback Potato Craze of ’14, and it was intensely prevalent (and equally delicious).

The interesting thing is, rather than rocketing in popularity and burning out just as quickly, this food fad is still kickin’. There are new twists coming out every day– ones using mini potatoes, herb-slathered potatoes, bacon-loaded potatoes, what-have-you. But my favorite twist is one that doesn’t use potatoes at all. It’s Hasselback Butternut Squash. More specifically, this Honey-Glazed Hasselback Butternut Squash with Parmesan Breadcrumbs. 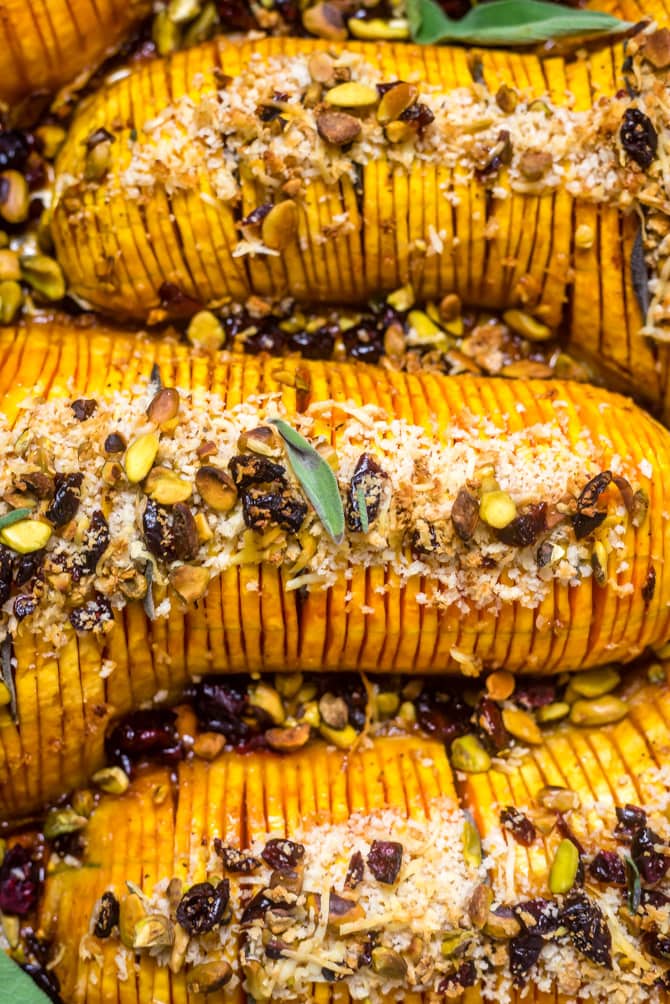 WHAT’S A “HASSELBACK”, AND WHAT’S SO GREAT ABOUT IT?

Hasselback potatoes got their name from the place they were first created– a Swedish tavern called “Hasselbacken”. In the time since their debut, hasselback has turned into a description for any food prepared the same way: thinly sliced while keeping the bottoms intact.

What’s the logic behind it? The slits allow for increased surface area exposed to the direct heat of the oven, resulting in plenty of deliciously crisped edges. Not to mention, those slits also make it possible to add ingredients between them, like minced garlic, cheese, or, in this case, leaves of fresh sage, to subtly flavor the dish throughout, rather than just having your seasonings sit on the surface. Meanwhile, the base holds everything together with tender flesh. As a result, you get the best of both worlds, texturally, in one veggie. You also pack in more flavor and save space on your sheet pan. What’s not to love? 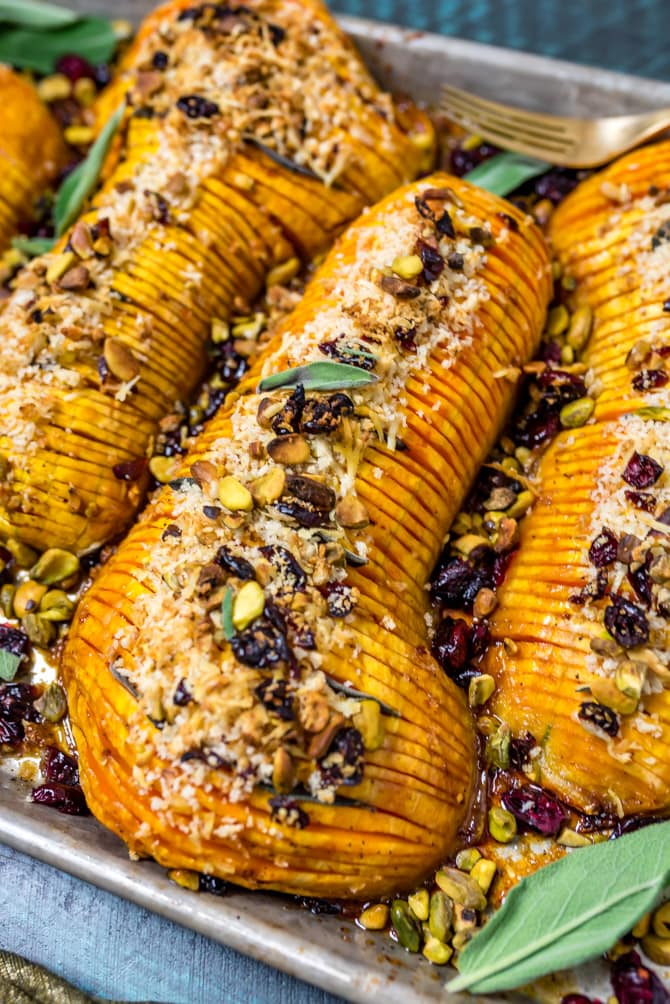 HOW TO SLICE THE HASSELBACK BUTTERNUT SQUASH

Okay, the answer to “what’s not to love” miiiiight be the preparation process. I’m not going to lie to you, this recipe requires a little TLC. The key lies in slicing the squash down as deep as possible and as thinly as possible to get those slices to open up and crisp as as they cook, without cutting all the way through the base or accidentally slicing off a section.

Luckily, there is an easy way to do it. After peeling, halving, and seeding the squash, place it cut-side-down on a cutting board. Then– here’s the trick– place a large wooden spoon on each side of the squash. Carefully slice the squash, and the sides of the spoon handles will prevent the knife from going all the way through. You still have to take your time, but this method should prevent any disasters!

For what it’s worth, the slicing in this recipe is done after the squash has already begun to soften, which makes it much easier to do. I’ll be honest and say that, while I’ve enjoyed many a Hasselback Potato recipe, I’ve always messed them up by not being able to get the slices spaced well. It’s much, much easier with the softened squash! 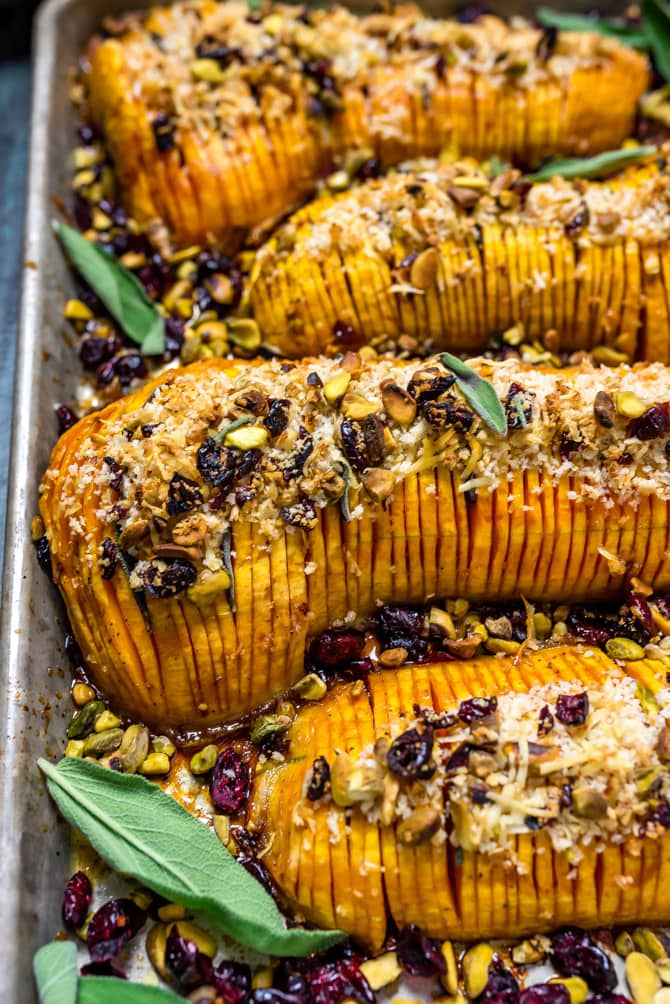 So as you may have noticed, these butternut squashes are pretty decked out. There’s the sage leaves stuffed in between. The glaze composed of roasted garlic, honey, butter, and cider vinegar. The parmesan cheese, pistachio nut, and dried cranberry loaded breadcrumbs. It’s got a lot going on. But every last detail adds to the show-stopping quality of this Honey-Glazed Hasselback Butternut Squash with Parmesan Breadcrumbs, making it perfect to serve as a side dish at holiday dinners (or even as a meatless main course). The thing I love most about this recipe is that it hits every mark in the flavor and texture departments, and the sum is truly better than its parts.

While it might seem like making all of the toppings would tack on a ton of time to your preparation process, most of it comes together while you tend to the squash itself. As you halve and peel the squash, you roast the garlic in the oven. Once the squash is placed in the oven to roast, you can start on the glaze. And the breadcrumbs take mere minutes to toss together after you’ve sliced up your squash. It’s not the fastest recipe, but it’s efficient, and trust me, the end results are well worth the effort. 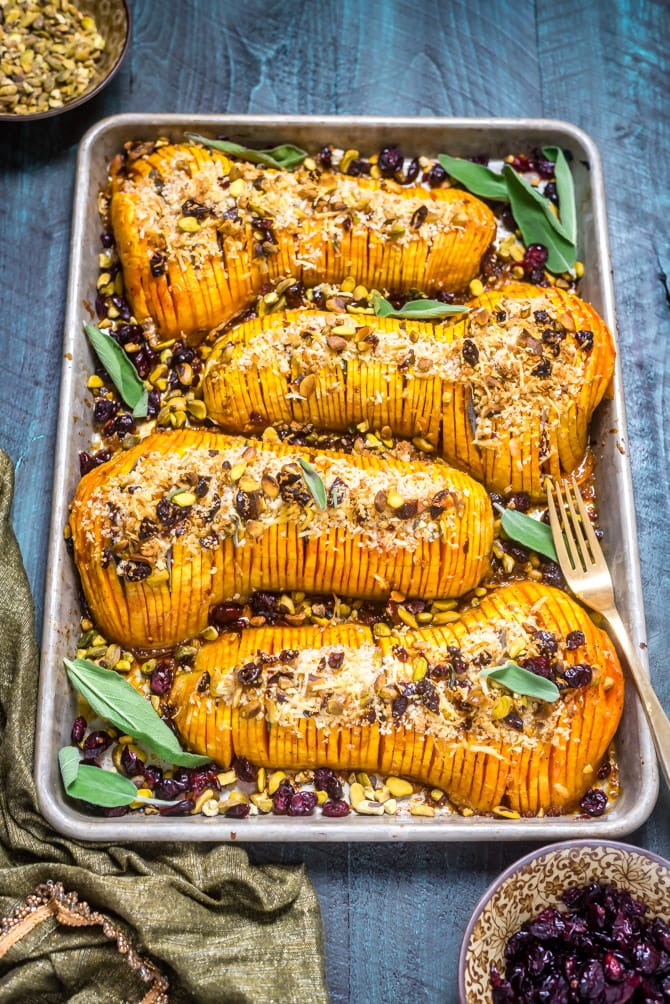