Learn how to cut and deseed a pomegranate with no stress or mess. It only takes one time to become a pomegranate cutting pro with this no-fail method! 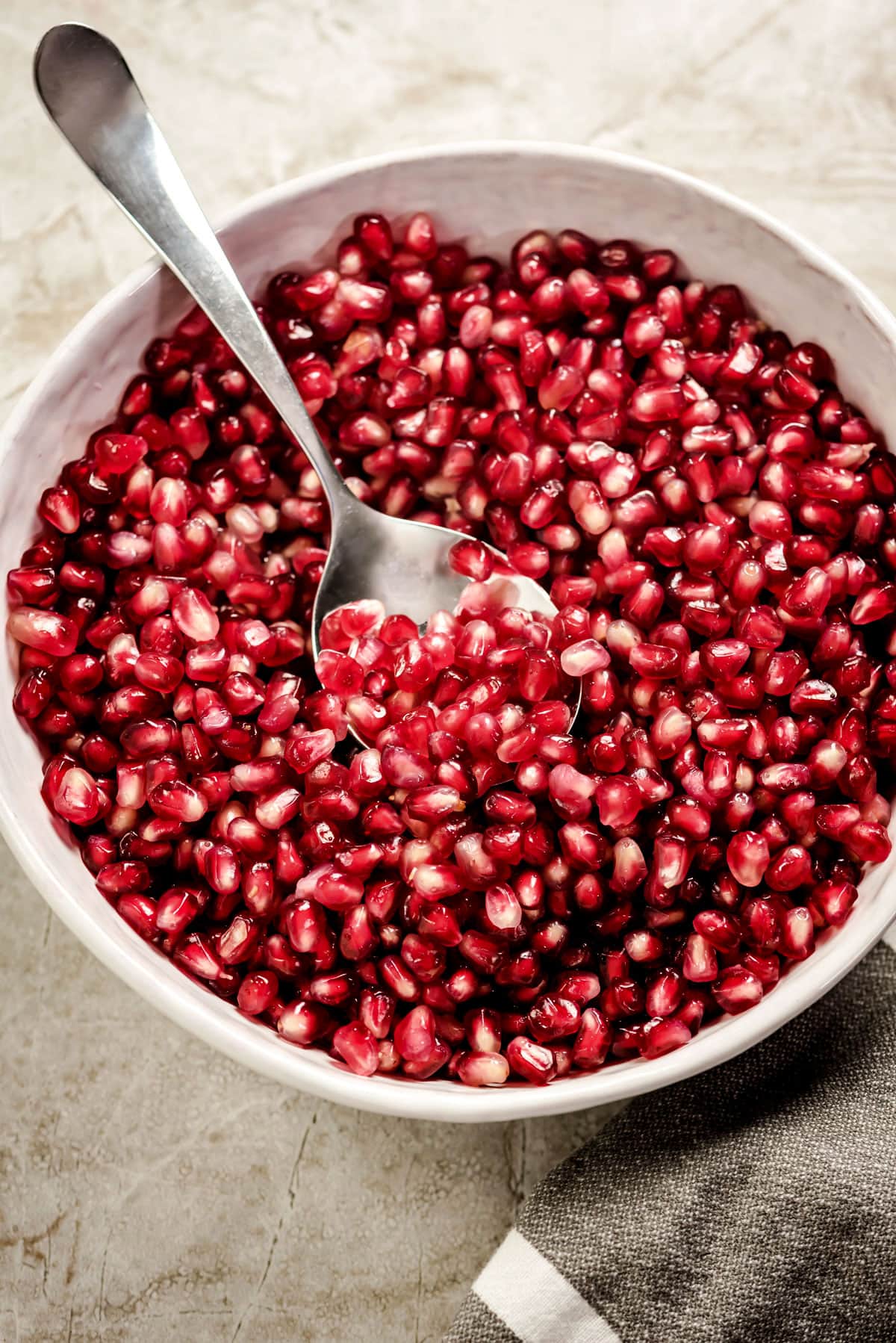 Pomegranates are pretty high up in my “favorite fruits” lineup. They’re sweet, tart, versatile, fun to eat… and often a bit of a disaster, if we’re being honest.

If you’re cutting through a pomegrante for the first time unguided, it can be a surprisingly huge pain to de-seed. The seeds burst easily and leak magenta juice when cut into, and that juice can stain your fingertips at best, or your countertops at worst. If you’ve bought the containers of already-plucked seeds in order to avoid the hassle of cutting open your own pomegranate, you’re certainly not alone. But those containers are expensive– and why pay up for convenience when there’s an easy way to do it yourself?

Read on to learn how to cut open and deseed a pomegranate in less than 5 minutes— without puddles of pomegranate juice to deal with after. 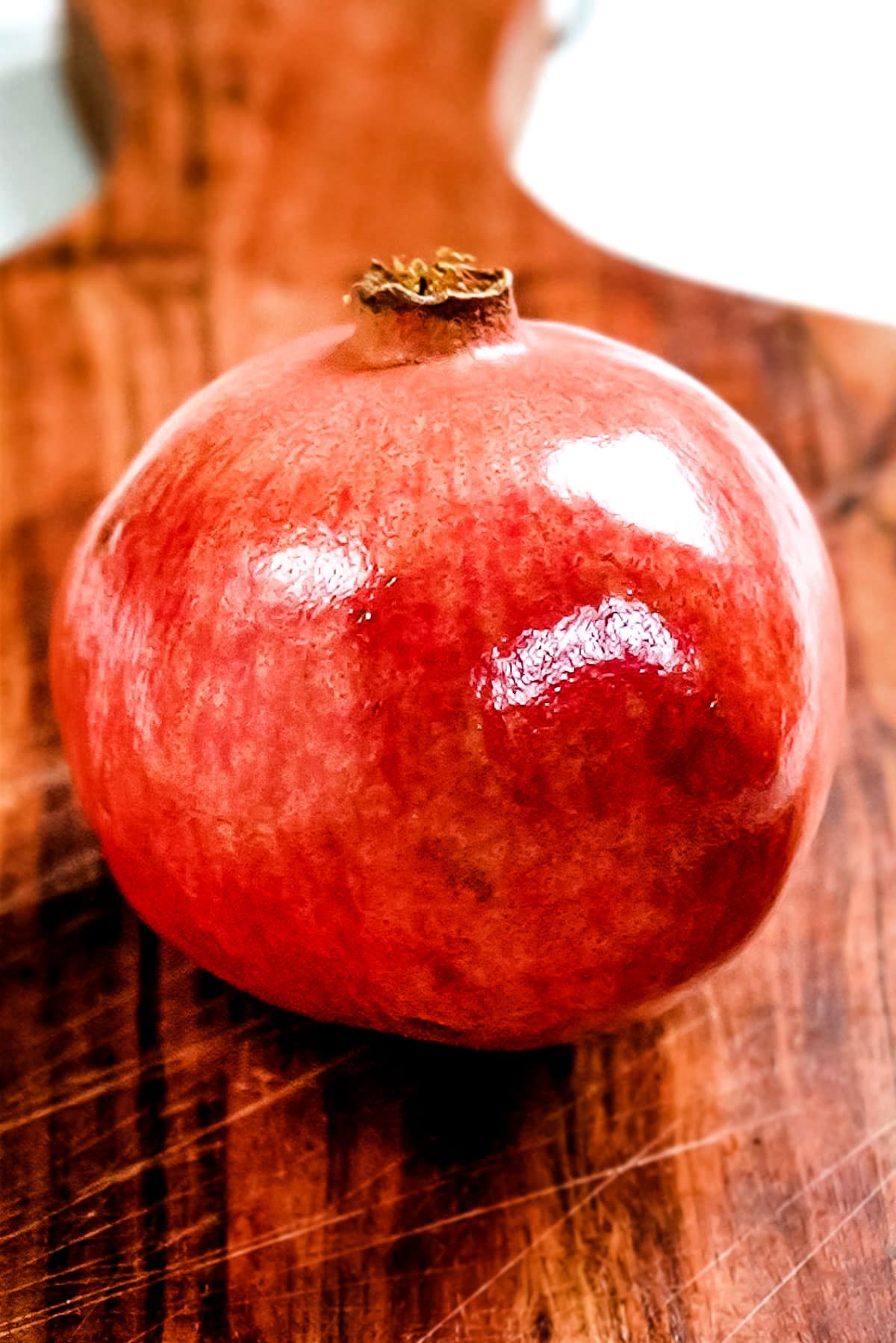 HOW TO CUT A POMEGRANATE

Packed with hundreds of ruby red seeds called arils, pomegranates are one of nature’s most beautiful fruits once you cut them open. That is, of course, if you can cut them open and remove the arils without bursting too many in the process. Luckily, it’s easier to do than you think! This method requires only a few minutes, no stress, and no mess. 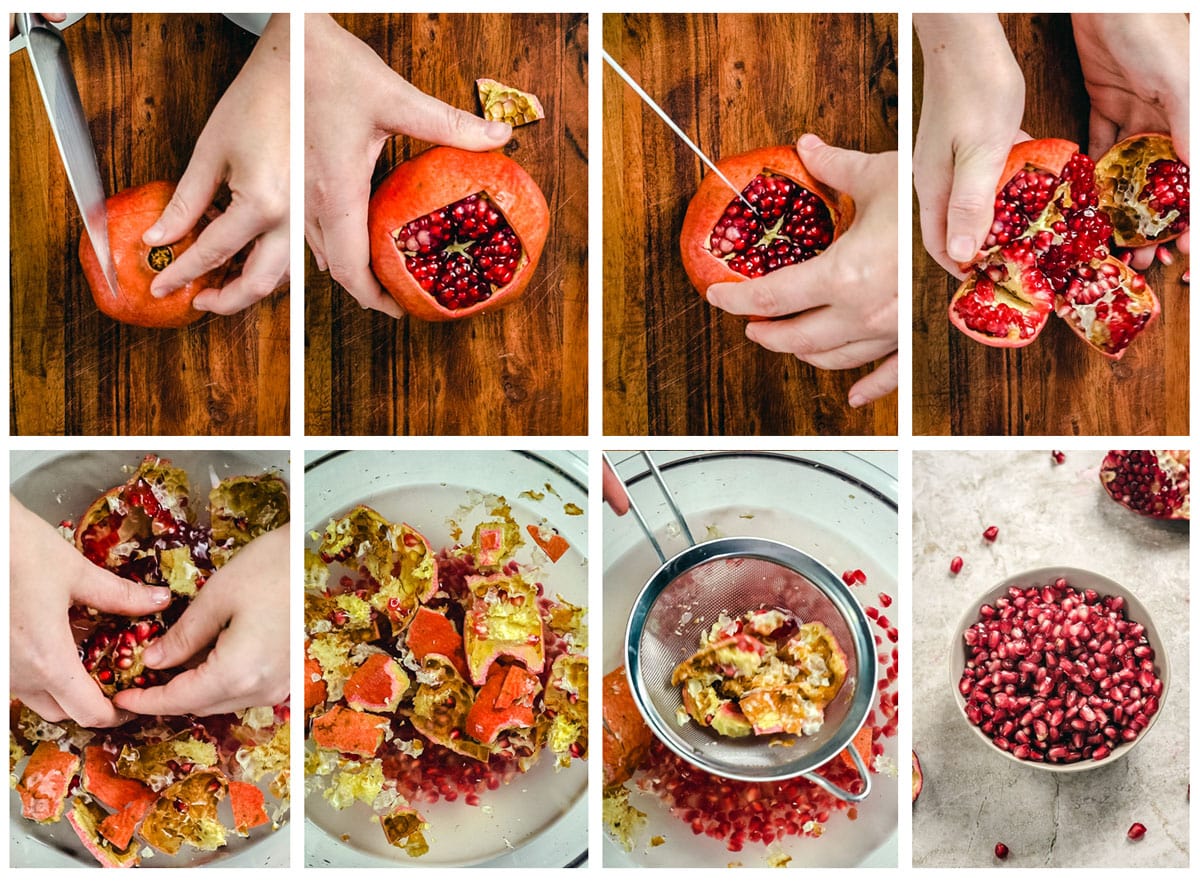 1.  REMOVE THE TOP OF THE POMEGRANATE

To start, use a sharp knife to slice around the top of the pomegranate. You want to score the skin and membrane without cutting deeply enough to disturb the arils.

Then, use your fingertips to pry off the top of the pomegranate, exposing the upper seeds and pith. You’ll be able to see the separate segments of the pomegranate now– they have white membranes between each section. 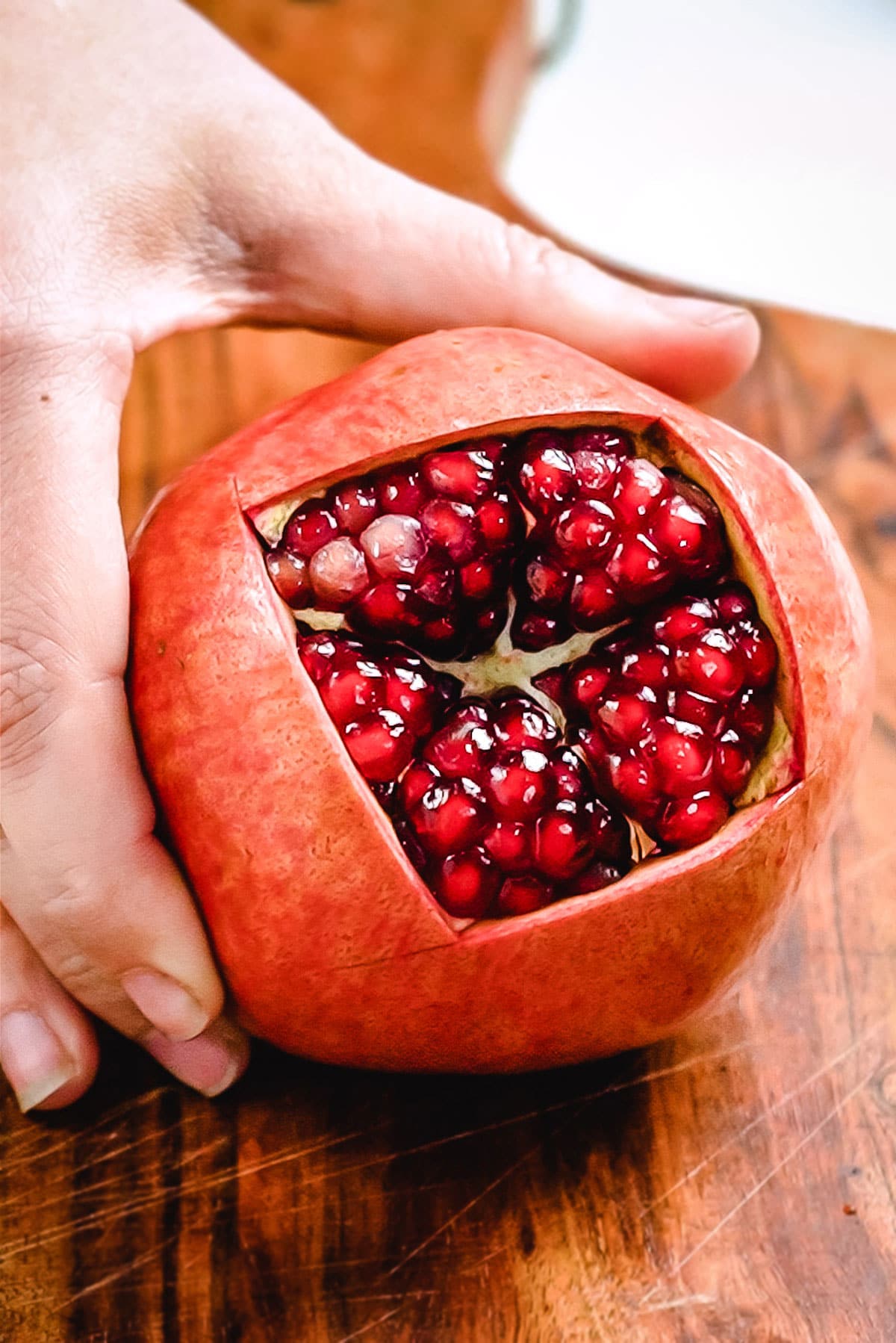 2.  SCORE ALONG THE SEGMENTS

Once it’s scored all around the segments, it’s time to crack it open.

Pull apart each segment and the pomegranate will crack where it’s been scored, opening up like a flower. Remove the inner cone of pith and then your pomegranate is fully cut open with the seeds exposed– and not a single seed has been broken! 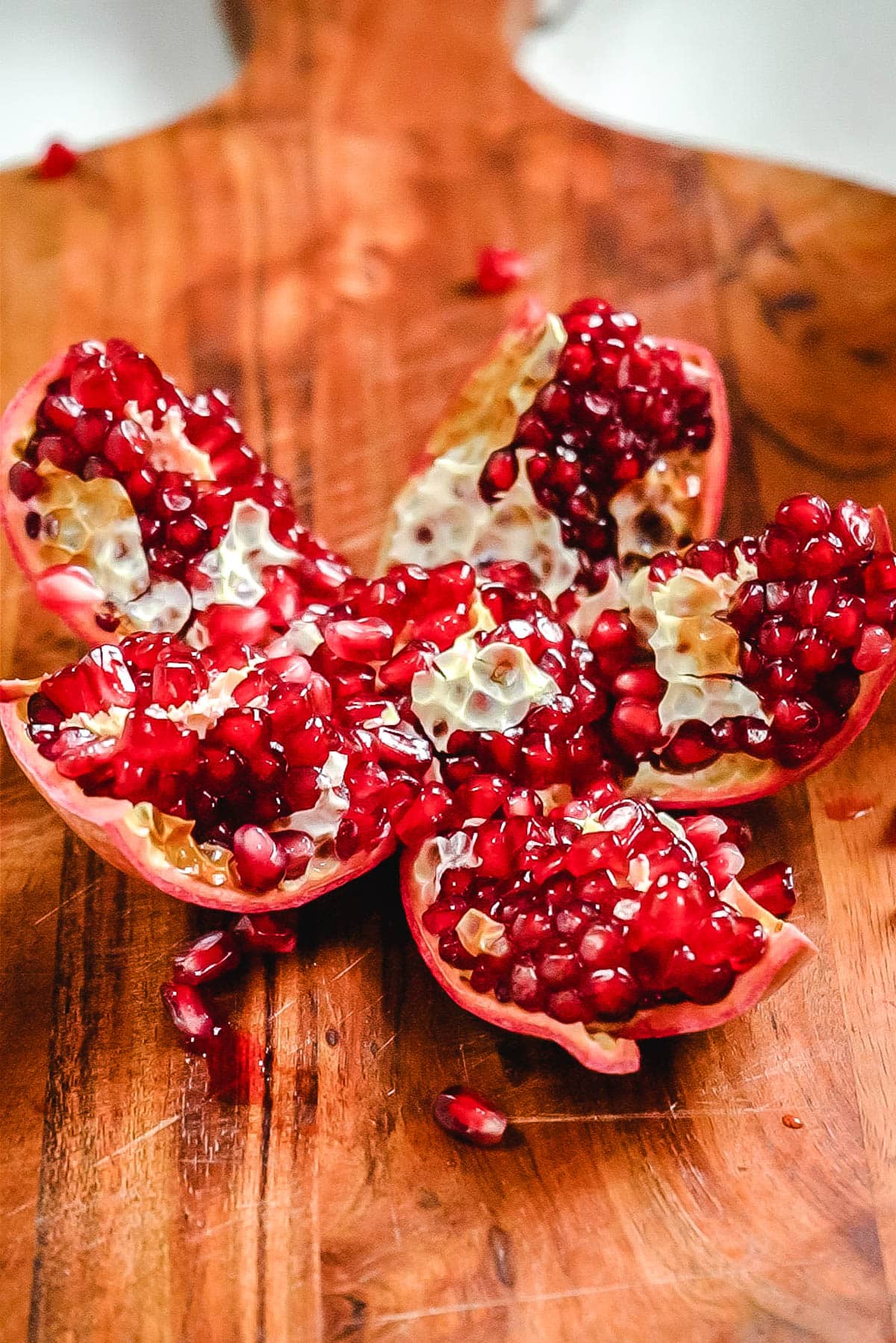 HOW TO REMOVE POMEGRANATE SEEDS

Opening the pomegranate is only half of the battle. It’s time to remove those seeds without breaking or bruising them! Your kitchen doesn’t have to look like a crime scene as long as you use the water method.

1.  DITCH THE WOODEN SPOON & GRAB A BOWL OF WATER

Instead, I like to dunk the whole pomegranate in a bowl of water and gently remove the seeds with my hands. The seeds separate easily and sink to the bottom while the membrane and skin will float on top of the water.

Using a fine mesh strainer, skim off any papery pith that has floated to the top. Shake the seeds a bit to release any pith that might be trapped below or loosely attached to the seeds. Skim until only the seeds remain in the water.

Using the same strainer, remove the arils from the bowl of water and use them as desired! It’s that easy– no pomegranate juice staining your fingers and surfaces! 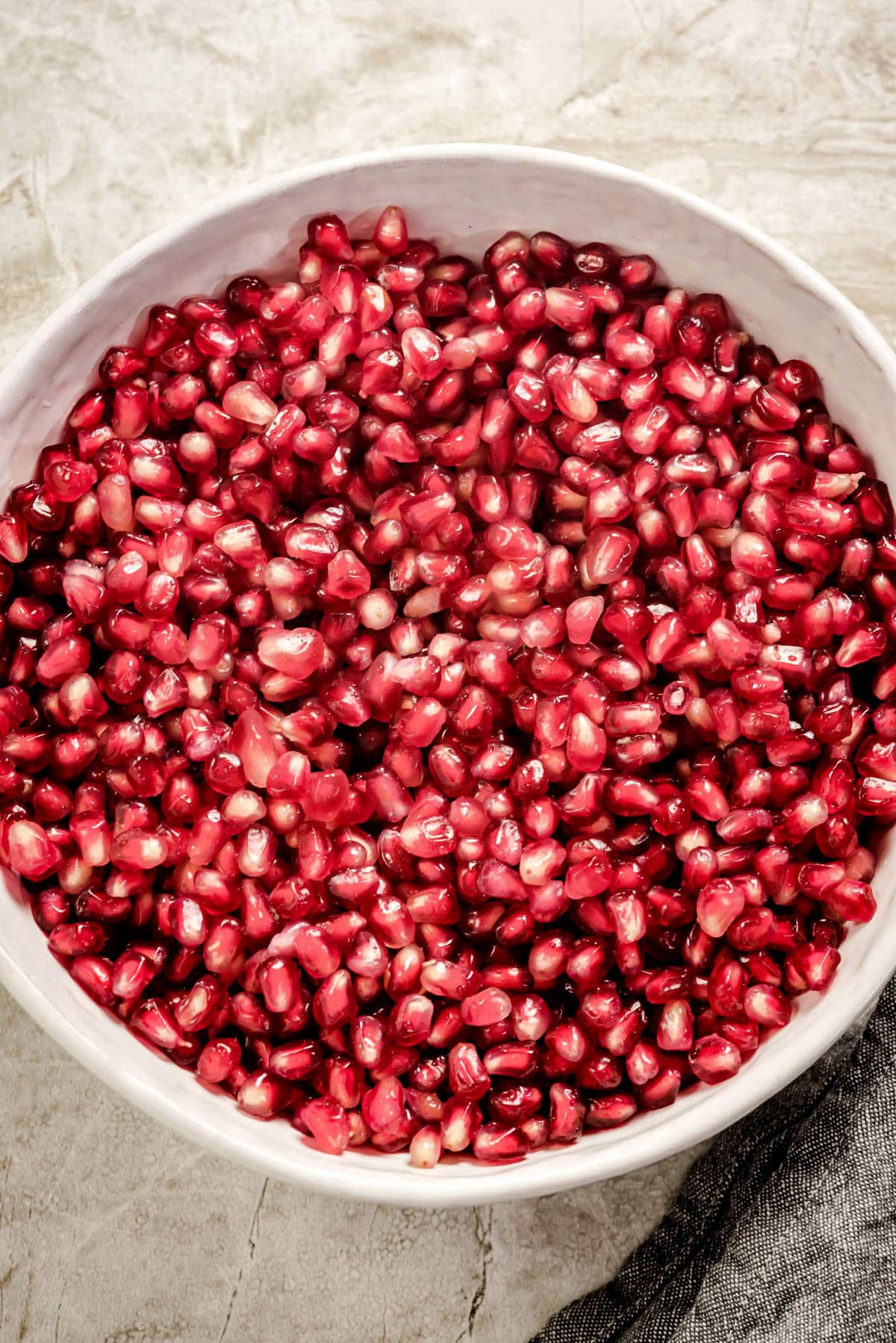 HOW TO EAT POMEGRANATE

There are hundreds of great ways to use pomegranate seeds as an ingredient in any type of dish from appetizers to desserts. Here are a few of my favorites:

Let me know what recipes you make with your pomegranate seeds!