German Potato Salad is the ultimate mayo-free summer side dish. With bacon, broth, and vinegar in the mix, there’s no shortage of flavor in this potato salad, which is served warm or at room temperature. 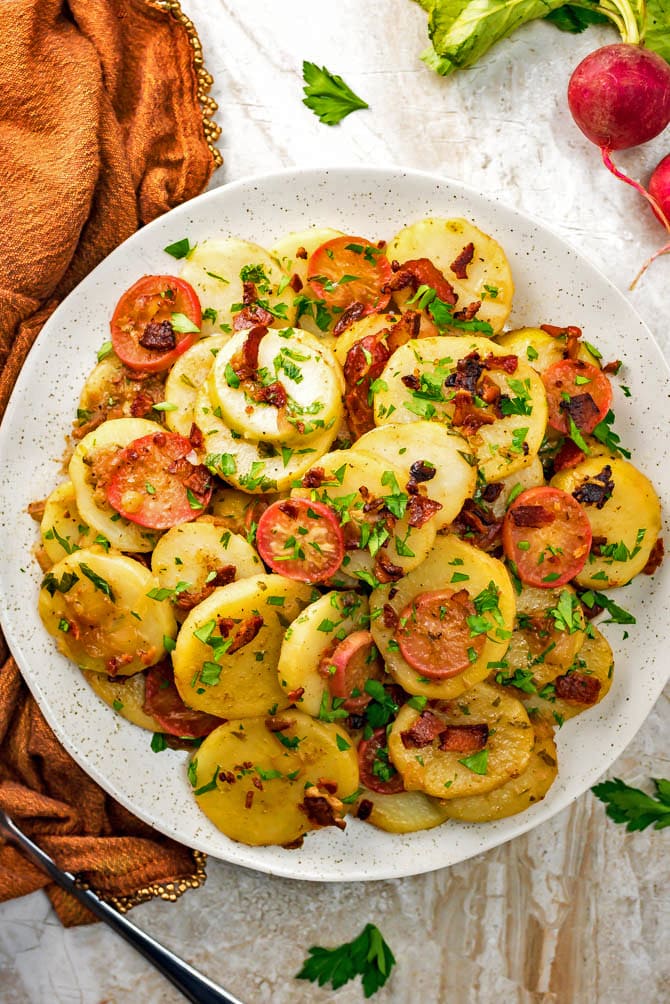 About 5 years ago –after 10 years of begging and pleading– I finally got my Omi to teach me all of her authentic and much-loved German family recipes. I may have promised her internet fame in exchange. I may have exaggerated. Slightly.

But I got a kick-ass recipe for German Potato Salad from it, so I have no regrets. 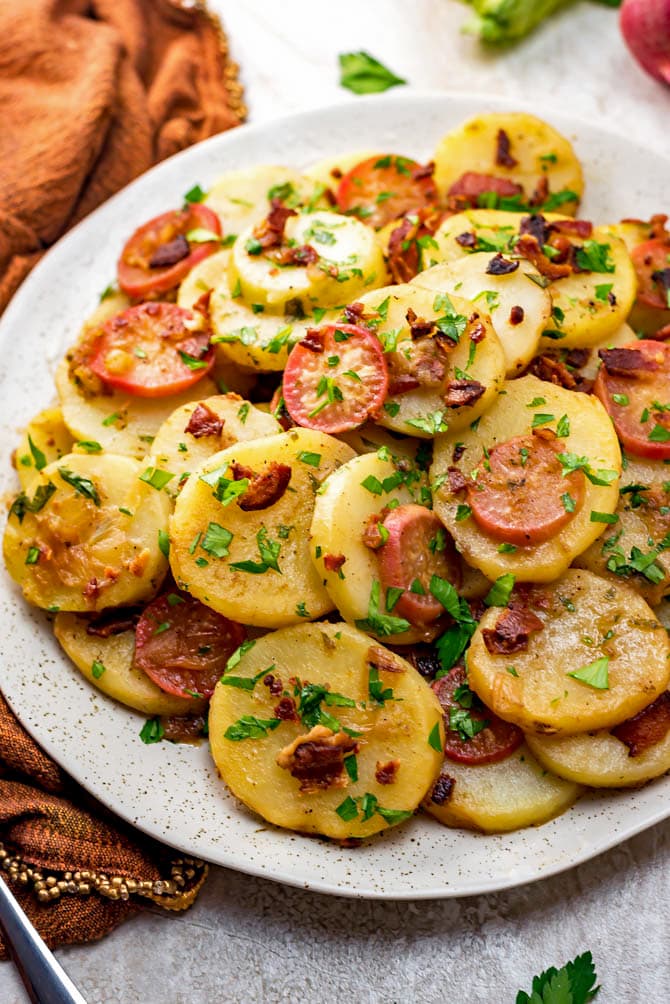 My Omi’s recipe has been up here for all of those 5 years, and it’s been super popular. Not just with everyone who has come here to make it again and again, but with everyone at every cookout I’ve had for the past half-decade, because I ALWAYS have to make it. However, over the years, I’ve tweaked a few things to make the potato salad even better.

The basics are all the same– red wine vinegar, bacon grease, oil, and beef broth are the main ingredients for the dressing that takes the place of typical mayonnaise. These days, I add in a bit of sugar to round things out. Just a little adds a lot more balance. No mayo necessary. 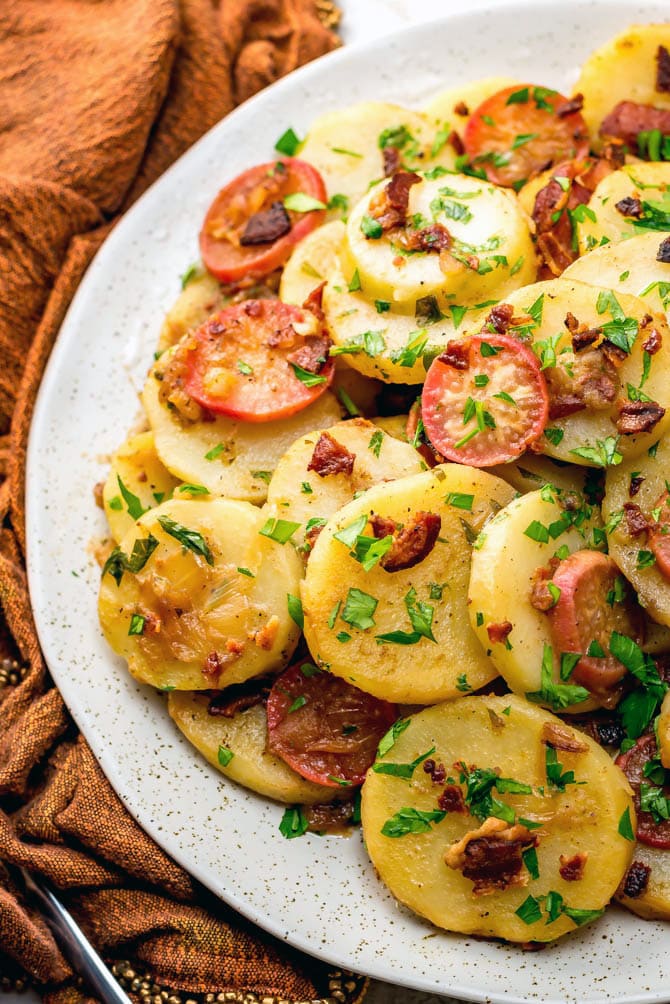 Another few tweaks: Instead of using waxy red potatoes and breaking them apart when stirring, I now use russets, which absorb the flavor of the dressing much better due to their starchier consistency. I also keep the potatoes in their sliced form, which makes for a more interesting and less mushy texture.

Oh and just one last thing about texture– it sounds weird, but sliced radishes are my new favorite add-in. James (my number one German Potato Salad fan) was SUPER against the idea to begin with because he “doesn’t like radishes”, but when sauteed in the bacon and left to absorb the warm dressing, they’re total flavor bombs with a tender texture and just slight spice and sweetness, and he hopped on board with the radishes real quick. If they freak you out, sure, leave them out, but I think you’ll really love them. 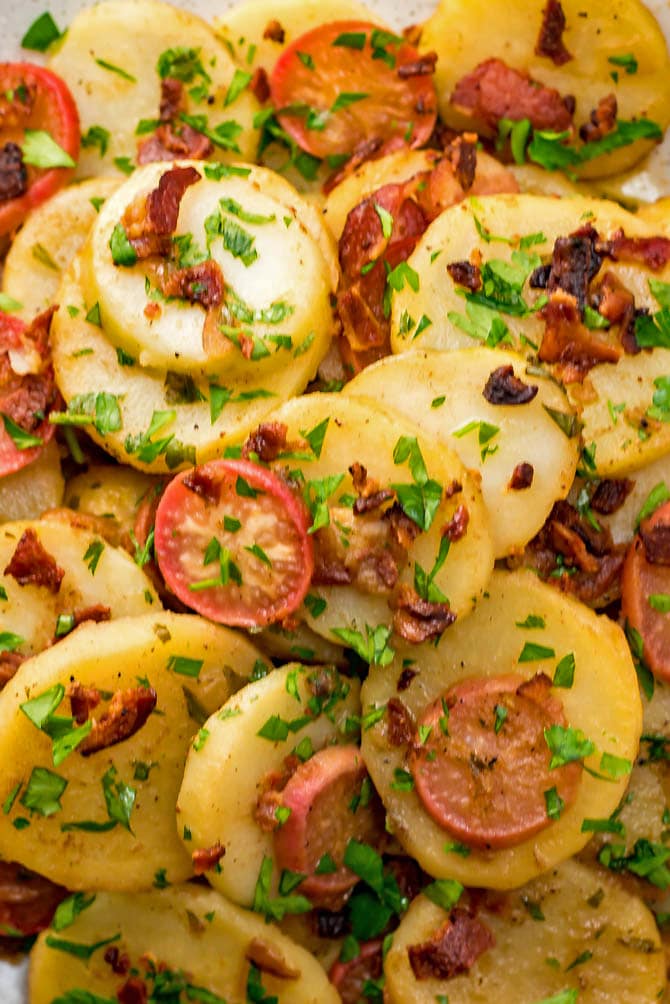 Those pesky, picky mayonnaise haters (like myself, sorry!) will never annoy you again with their refusal to try your prized potato salad at big summer BBQs if you serve this version up.  Even those who love the mayonnaise-slathered American version usually enjoy the vinegary German Potato Salad and ask for the recipe.  Everybody wins with German Potato Salad.

Usually traditional potato salad is served a little cold, but not this one. Instead, it’s served warm or at room temperature. You don’t have to chill it. You don’t have to worry about it getting warm after sitting out. You just serve it as is, and it tastes amazing. How easy is that?

Plus, just in case you forgot, there’s bacon. A lot of it. 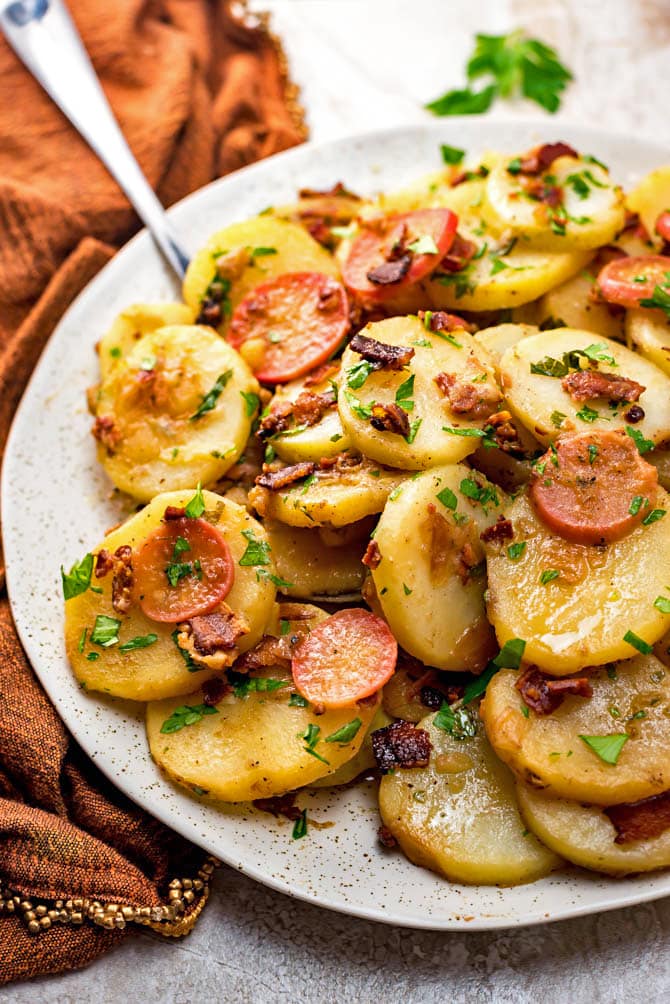 Boil the potatoes. Test them by piercing with a fork and drain when they reach the desired consistency (about 20 minutes). Let cool until you can handle them without burning yourself, but don’t let them get cold. Peel and slice into 1/4- 1/2 inch thick slices. Place in a large bowl.
Cook bacon in a large pan over medium heat until crispy. Transfer to a paper towel lined plate and crumble, leaving the grease in the pan.
Add oil and onions to the pan and cool until softened, about 5 minutes. Add in the sliced radishes and saute for an additional 3-4 minutes. Mix in the vinegar, beef broth, and sugar and bring to a light boil. Then gently toss in the sliced potatoes, half of the bacon, and half of the parsley. Cook until warmed through, stirring occasionally. Season with kosher salt and black pepper, to taste
Top with remaining bacon and parsley and serve warm.

* If you put this in the refrigerator, just make sure to take it out at least a half hour before serving to bring it back up to room temperature.