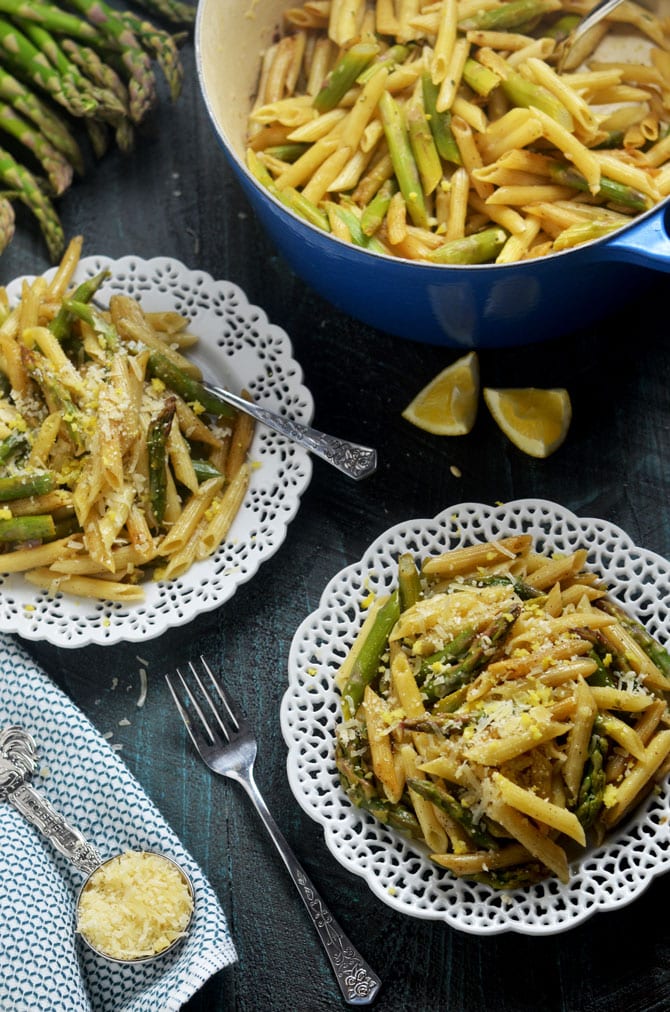 We were in the middle of watching our 8th House of Cards episode of the weekend, not even talking about this Lemony Brown Butter Asparagus Penne, when James turned to me with a very serious look on his face and said, “You should write in your post tomorrow that I like canned asparagus.”
It’s true, he does like– no, love— canned asparagus. In fact, when given the choice of any side dish, it’s the first thing he always requests (and is quickly denied). I will always take the opportunity to make a side of fresh asparagus, though, which James enjoys even though I didn’t peel back any metal lids in the preparation process, but his heart of hearts is always with the pre-packed, weirdly preserved stuff.

You win some you lose some. 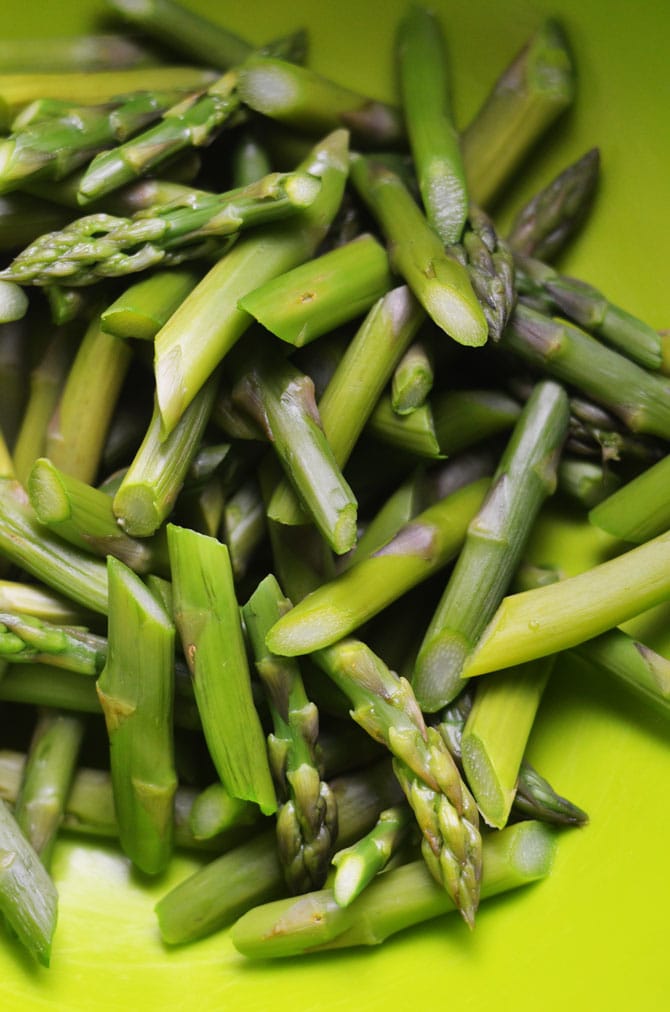 Clearly, I liked James’ idea for a post opener, and agreed that I’d use it. And then, just as unexpectedly as it was for him to bring up canned asparagus in the first place, he completely changed his tune. “So what, are you going to make fun of me for liking canned asparagus?” he asked, his eyes squinting accusingly at me.

“That I liked the asparagus in the pasta more than I like canned asparagus.”

But that isn’t true. 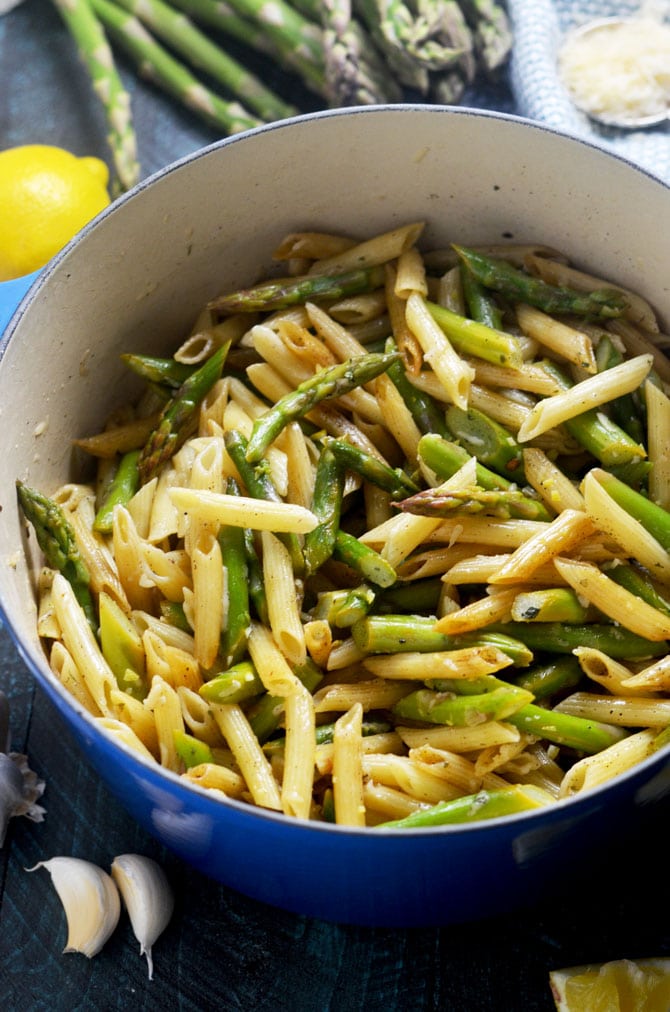 There was silence for a few seconds, followed by the near-deafening sound of my mind exploding, because throughout the past 4 years I have been trying in vain to get this man to tell me that any asparagus recipe I’ve made is better than the canned kind. I’ve sauteed it, roasted it, wrapped it in bacon, shaved it, stir-fried it… you name a way to prepare it and I will cross it off the list. After every attempt, I’ve gotten, “It’s just as good as canned,” at best. Better-than-canned had reached such an unattainable status that I didn’t even bother asking anymore.

Yet there it was. An unexpected personal victory.

I’m still patting myself on the back. 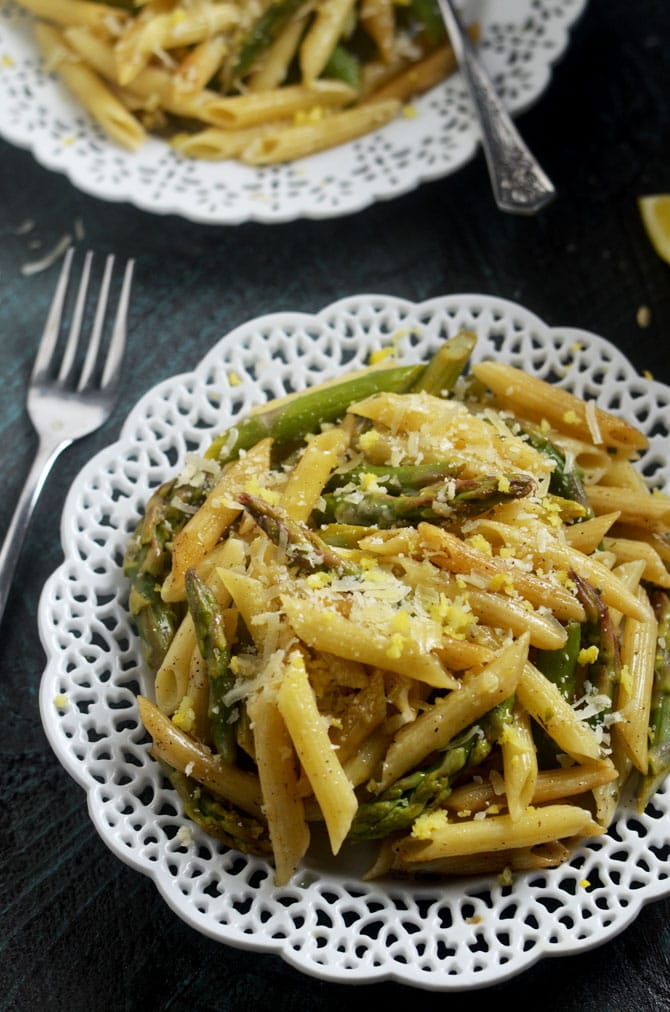 But seriously, I really do love this pasta. The citrus and fresh asparagus cement it as a seasonal, springtime dish, and despite being rich and deeply flavored from the brown butter, it doesn’t have the heaviness of the typical pasta and sauce selection we’d been shoveling down all winter. Plus, making the Lemony Brown Butter Asparagus Penne is incredibly easy. 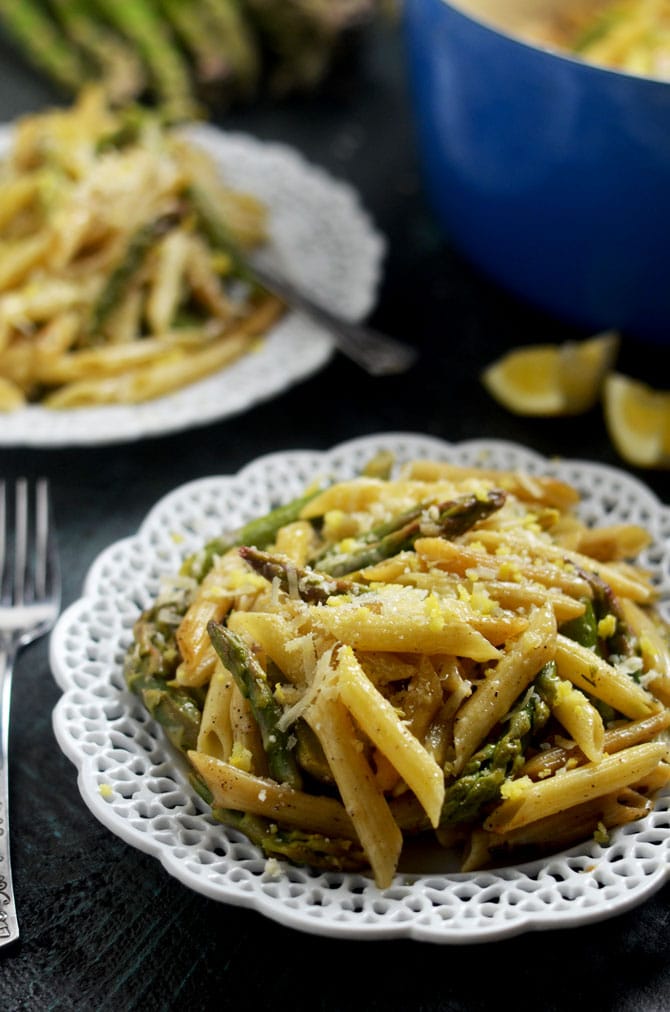 First, I boil some water, and throw in asparagus that I’ve cut to roughly the same size as the penne. Once the asparagus is bright green, I use a slotted spoon to remove the pieces from the water, and I set them aside while I boil the penne in the same pot. Next, I brown my butter in a separate potuntil it’s a light hazelnut color. I mix in some garlic to further flavor the butter, and then I add in the cooked pasta and asparagus. I toss it all up in that garlicky, nutty butter, which allows it to absorb a bit for flavor while also gently crisping along the edges. Finally, I stir in the lemon juice, lemon zest, parmesan, salt, and pepper, and it’s done! A restaurant-quality pasta on a weeknight dinner schedule.

It’s no wonder James loved it, right? And you will too.

By the way, when you give this recipe a go, don’t forget to tag #hostthetoast on Instagram or Twitter! Can’t wait to see yours!