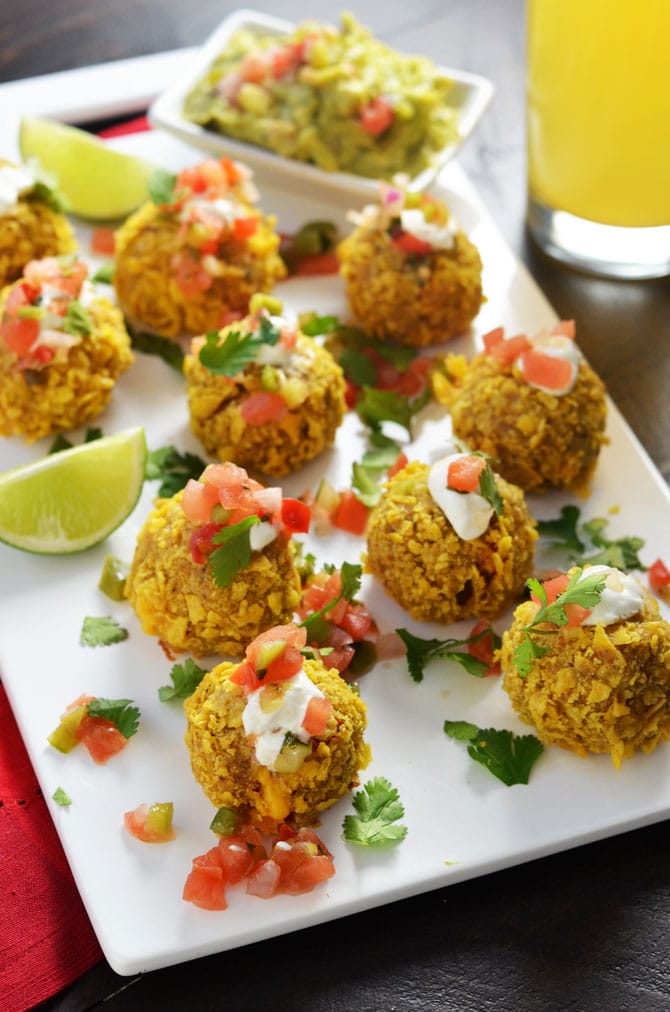 Nachos are pretty much the quintessential football food. They’re tortilla chips piled high with seasoned ground beef and refried beans, blanketed in melted cheese and salsa, and topped with sour cream– what’s not to love about that, right? Besides the fact that the toppings nearly never wind up evenly distributed, of course. And how the chips that get soggy so quickly and become pretty impossible to pick up. And then there’s the issue with them not being so easy to divide amongst a big group of people, and we cant forget how the cheese always gets cold so quickly after being exposed to the air. So I guess that nachos aren’t perfect, despite all of their deliciousness.

Rather than abandoning nachos for my game day celebrations, I decided to try out something new. What if I put all of my favorite nacho flavors into bite-sized balls? In theory, the cheese would stay warm and gooey, the chips would stay crisp, they’d be easy to serve, and every bite would have the perfect portion of each “topping” ingredient. They’d be Loaded Nacho Bombs, exploding with flavor.

In practice, much to my delight, that’s exactly what happened. 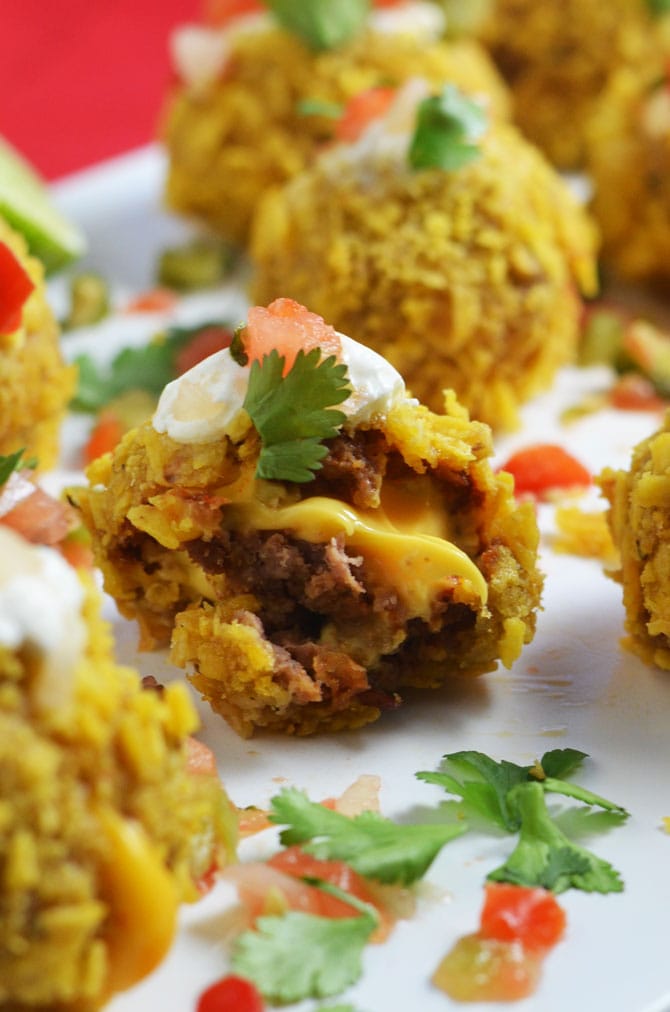 To make Loaded Nacho Bombs, I start by creating a sort of meatball-esque base. I combine equal parts ground beef and refried beans, which forms a soft mixture that I spike with plenty of pico de gallo. I flavor the mixture with taco seasoning and add in cornmeal to help thicken up the base so that it can be formed into balls.

Then, I stuff the centers with cheese. I’ve used both regular cheddar cheese and Velveeta, and I like them both here. The cheddar carries a stronger real cheese flavor of course, but Velveeta stays creamy (and nacho-cheese-like), which gives it a slight edge despite the fact that I would typically shy away from it. Use whichever you prefer. 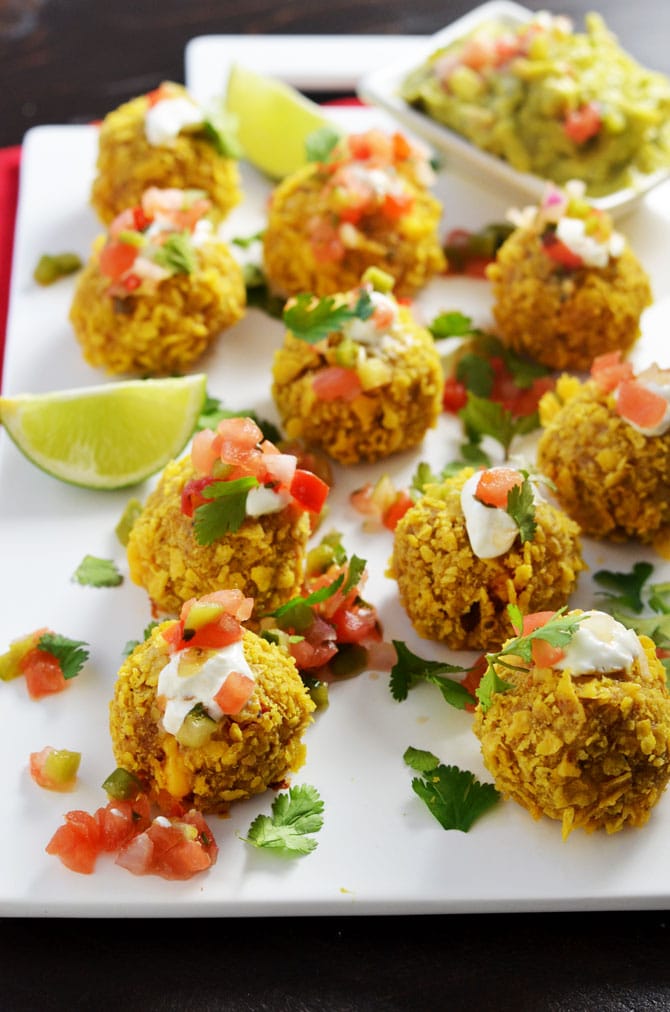 After tucking the cheese inside of the beef and bean base and re-rolling, I dip the balls into additional cornmeal, then egg, and then crushed tortilla chips, to coat. All together, it creates a pretty solid shell that prevents all of the cheese from oozing out as the Loaded Nacho Bombs bake.

Once they’re baked, the Loaded Nacho Bombs are ready to serve as-is, but I like to go the extra mile and dollop just a tiny bit of sour cream on top of each, as well as some extra pico de gallo and some cilantro. If you’re a guacamole fan, feel free to add some on there as well. I served mine on the side because my housemate, Mike, doesn’t like avocados. I’m not complaining, because it means there’s more guac for me!

If you’re having any trouble envisioning the process of making these, check out this quick video I put together that shows how it’s done:

I’ll tell you what, making that video was like a billion times harder than making these Loaded Nacho Bombs. Probably several billion times harder. I am hoping I get the hang of it soon, but for now I’m going to ride it out and struggle through it because I really think that videos could be helpful for all of the visual learners out there. The bright side is that I had to re-film a few spots a few times, which means I had an excuse to make (and eat) several batches of Loaded Nacho Bombs over the course of a few days.

And I’ll probably make some more for the Super Bowl this weekend, just because I can. I think next time I’ll try out some extra add-ins, like black olives and jalapeno peppers. I just love how versatile they are!

Give them a go for your Super Bowl party, and don’t forget to take a photo and tag #hostthetoast on Instagram or Twitter to show off your spin on them. I can’t wait to see how you serve them up.