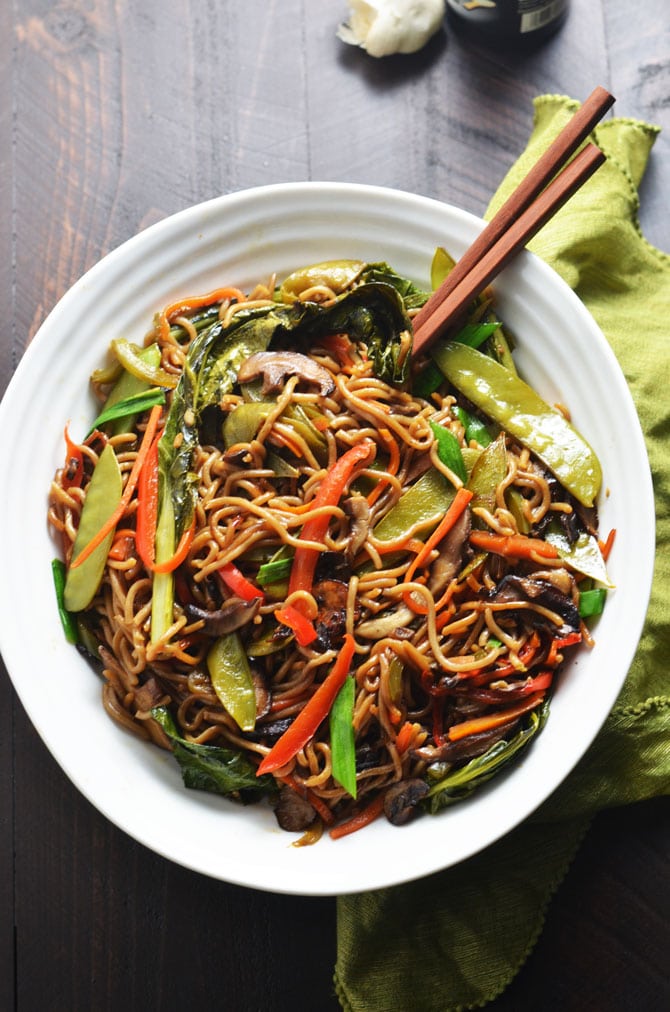 There are times, like after a night out, a particularly miserable day, or a rough break-up, that I welcome the absolute lack of restraint that most takeout restaurants exhibit when it comes to salt, sugar and oil. Oh yes, nothing soothes a broken heart quite like massive amounts of some seriously artery-clogging cuisine.

But for every day dinners? No way. I’d prefer to avoid buying extra tickets for the cardiac arrest lottery.

Even the veggie-filled options are extremely unhealthy, which is a shame because American-Chinese food can be so flavorful without overdoing the unhealthy aspects. So when a craving strikes for soy-sauced dinners, I give them a go in my own kitchen instead, in a quick, easy, and much healthier version than the typical takeout. In fact, I’ve decided to redo takeout and fast food classics for the rest of the month! The first post in the series was Sweet & Sour Chicken, and today I’m sharing with you some Loaded Vegetable Lo Mein!

Unlike the lo mein you’ll usually get when you order out, this recipe focuses on getting a large amount of vegetables in the mix without relying on tons of oil. There seems to be this idea that you have to use a lot of oil in order to properly saute large amounts of vegetables, but it simply is not true. Because vegetables easily steam to a tender texture due to high water content, you don’t have to saturate them with oil to get them to cook nicely. Just a bit will give a stir-fried bite to them without making them greasy. Vegetables are porous and tend to soak up whatever you cook them in, so make sure you’re letting them absorb the sauce mixture instead of too much oil, and you’ll wind up with a more flavorful and healthier final product. 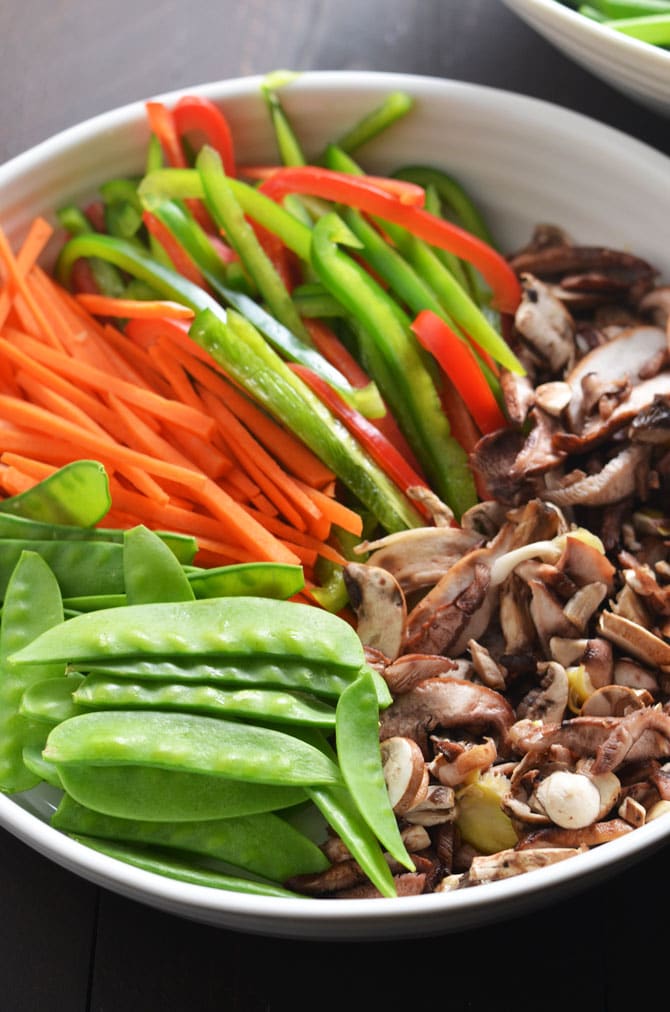 For this recipe, I used a mixture of shiitake, cremini, oyster, and porcini mushrooms that came as a pre-packaged blend, bell peppers, carrot, snow peas, green onions, and leafy greans as my veggies. You could easily substitute your own favorite vegetables or just use up whatever you have lying around in your fridge. Similarly, if you can’t find lo mein noodles at your local grocery store, use whole wheat spaghetti instead. It seems like a strange substitution, but the difference is almost unnoticeable when you add in all of the vegetables and tasty sauce! 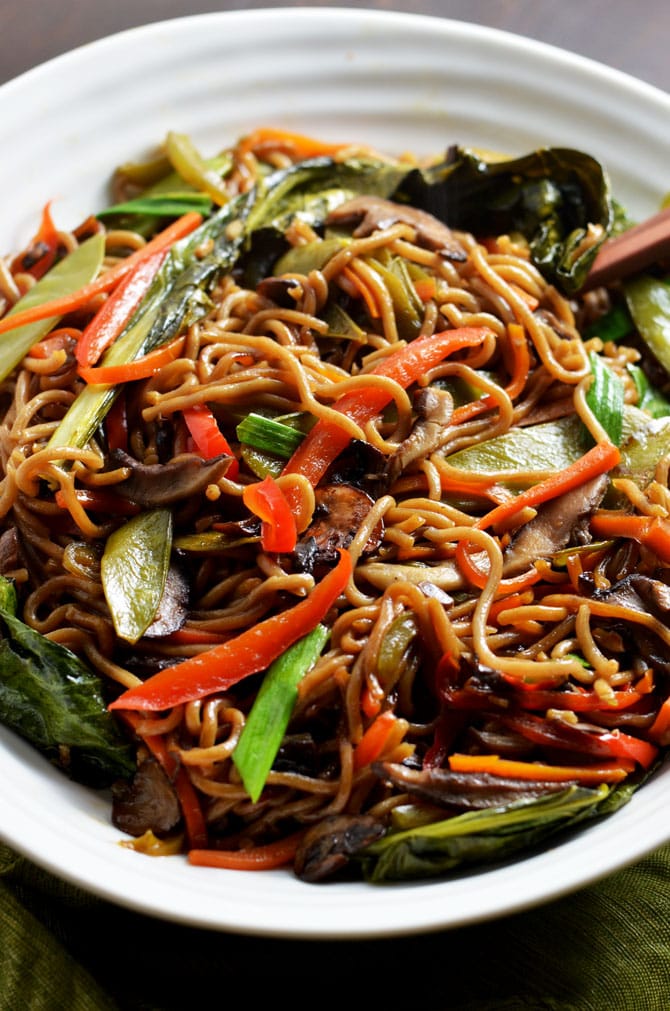 Typical Vegetable Lo Mein contains 310 calories for a 1 cup serving, and nutritionally, you’re not looking at anything great. This Loaded Vegetable Lo Mein version, however, is 202 calories per (larger) serving, is low in saturated fat, high in dietary fiber, and is very high in manganese, selenium, and vitamins A, B6, and C! Finally, a Chinese takeout recipe that you can actually feel good about eating, and you don’t even have to give up your beloved noodles. Not to mention, it takes less than 30 minutes to make!

When you give this recipe a go, be sure to tag #hostthetoast on Instagram or Twitter and show off your colorful, healthy, homemade dish. 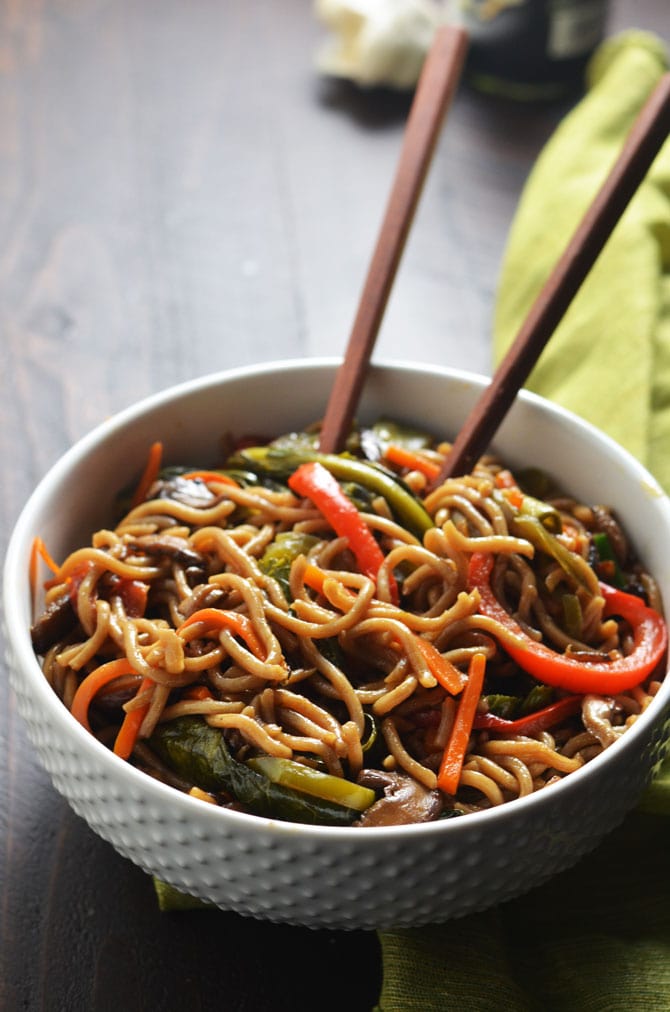 To make this recipe vegan-friendly, replace the honey with sugar.

« Sweet and Sour Chicken
Chicken and Broccoli in Garlic Sauce »