I remade these Mexican Stuffed Peppers so that they’re better than ever.  Check out the new post, recipe, and photos HERE.

This past weekend, James and I went to an awesome little barbecue place in his town and pigged out (see what I did there?).  It was fantastic, and I’ve definitely been inspired for some future BBQ recipes that I assume I’ll be even more eager to make once I come back from North Carolina.  However, I’m not writing to tell you about the juicy pulled pork or flavorful ribs right now.  I actually want to talk about the tiny free salad bar.  Kind of.

The salad was fine, but at the very end of the salad bar was the real gold– little hot cherry peppers that I loaded into my bowl as though they were the reason we came in the first place.  James took one and, because he’s also a hot and spicy fanatic of sorts, bit in as soon as we sat down at the table.  Ten seconds later, he was spitting into a napkin, gasping, red-faced, and fanning his mouth.  I proceeded to eat my first pepper, and my second, and my third.  “How are you eating that?” he asked, sincerely.  “I just love peppers,” I reminded him. 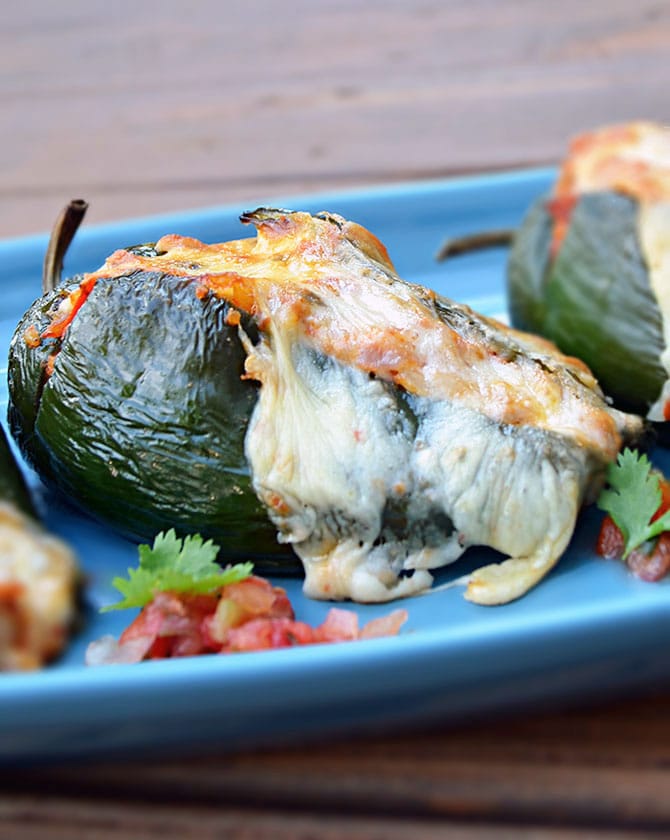 And it’s true, whether it’s a jalapeno, habanero, bell pepper, chile, or pepperoncini, raw or roasted, pickled or not, I’m all about it.  Lately, I’ve really been experimenting with pepper heat and flavor to see what kind of combinations I can come up with.  My favorite so far has been a twist on the typical Stuffed Pepper that our moms used to make.  Instead of using sweet bell peppers, I decided to try out a smokier-tasting cousin– poblanos.

If you’re not a ghost-pepper-eating, fire-breathing heat-lover, don’t worry.  These peppers aren’t typically scorch-your-mouth-hot, although you may wind up getting the unpredictably spicy ones from time to time.  Luckily, even if that’s the case, roasting should take care of most of the tear-inducing heat, but expect a bit of tongue-tingling action.  Either way, this pepper is more about the flavor, which is wonderfully complimented in these stuffed peppers with other ingredients you’d typically find in Mexican dishes such as chorizo,  rice, tomato, onion, and sour cream, all topped and overflowing with delicious melted cheese.

Welp, I just got hungry again.

These Mexican Stuffed Peppers are tasty deviations from typical stuffed bell peppers. Prepare for these smoky, creamy, tangy, meaty, sometimes spicy, cheesy, and all-around satisfying peppers to get you a lot of recipe requests.