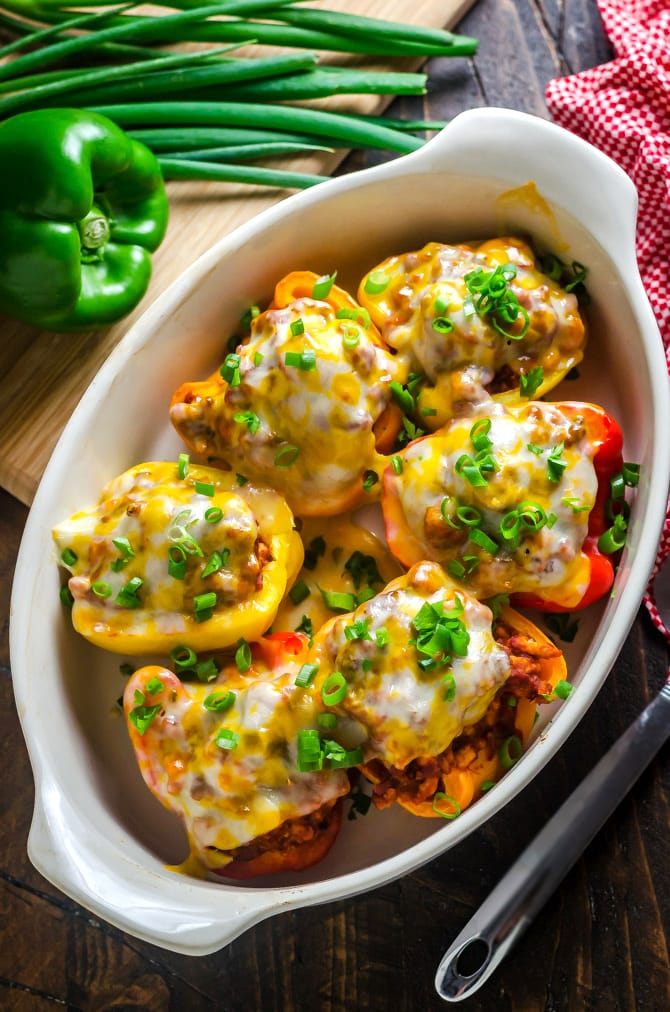 When I first posted this recipe for Sloppy Joe Stuffed Peppers years ago, I knew it would become a favorite with my readers because it was already a favorite of mine. Of all of the recipes that I post on this blog, this one is undoubtedly the one I make most often. It’s the perfect weeknight dinner: It takes less than an hour to put together, requires only a few ingredients, and it’s always a hit with the whole house. And as a bonus, it’s also low-carb and low-calorie (at only ~250 calories per serving).

A cheesy, meaty, easy, kid- and budget- and diet-friendly recipe that tastes awesome. It’s like a thing of fairy-tales.

But this recipe is 100% real, you guys. How’d I come up with something so great? Well, as they say, I got it from my mama. 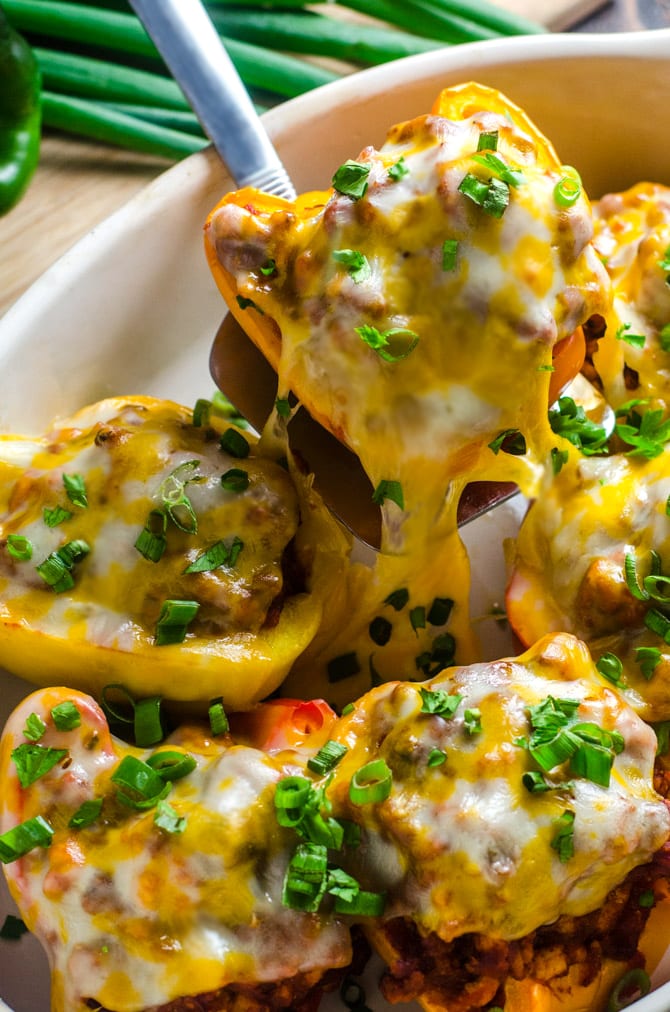 When I was growing up, my mom didn’t cook many different things. We were a busy and picky family which made our dinner options limited– and by limited, I mean incredibly boring and monotonous. (Sorry, Mom.) It was basically meat, re-hydrated creamy pasta sides, and microwaved frozen broccoli every day. Blah.

Anyway, then I went away to college. That’s when my mom decided she would switch things up with tons of mouth-watering food, and she and my brother would laugh maniacally at the dinner table about how I was missing out and surviving on Ramen noodles in my dorm.

That’s exactly how it went down. I’m convinced. 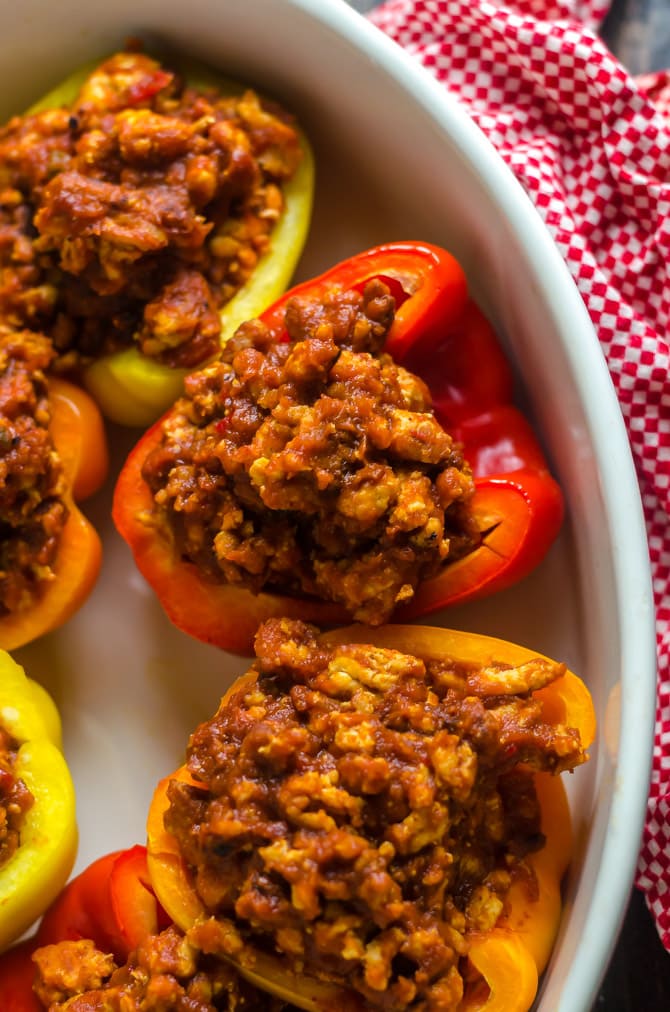 But one day my poor, hungry, college-student self traveled back home for an unannounced visit– one that was welcomed with a wave of the most delicious smell the second I walked through the door. I’ve gotta admit, I probably would have drooled at the thought of any dinner that wasn’t from the dining hall line, but I could tell right away that something especially awesome had just come out of the oven.

I showed up just in time for dinner and there was a dish of Sloppy Joe Stuffed Peppers, all sauced up and smothered with melted cheese, sitting on the table. And there just so happened to be enough for me to try some. 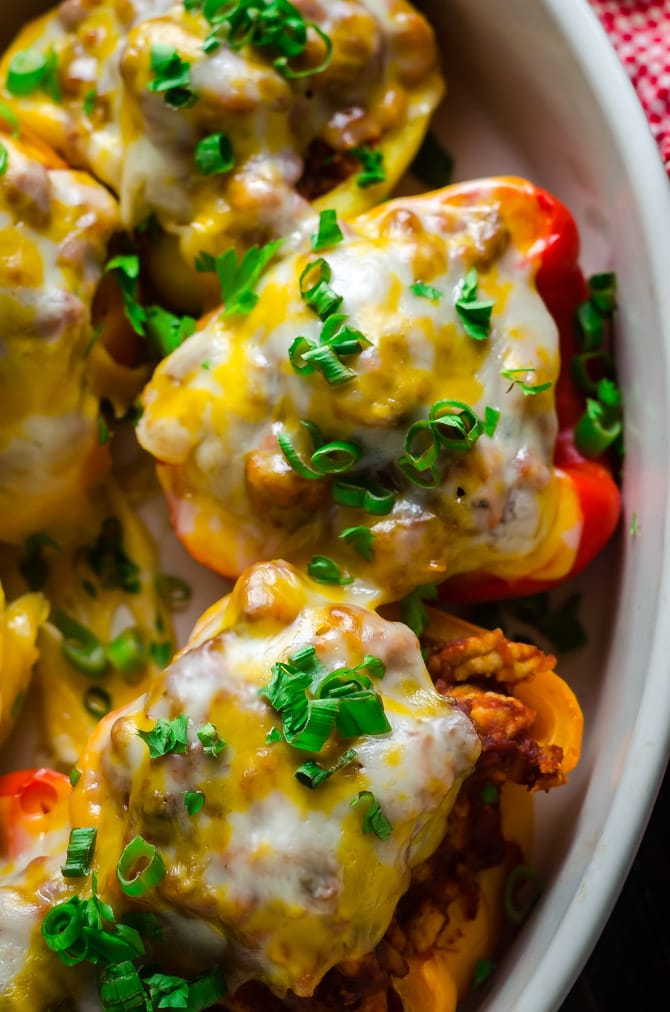 The great thing about this recipe is that even though we’re a lot less fussy with our foods these days, it still would have worked for our picky palates way back when we were eating never-ending pasta sides, and it for sure still works with our busy schedules. If you feel like you can relate to those struggles– and let’s be honest, the majority of families probably do– these Sloppy Joe Stuffed Peppers are really going to be an asset for you.

I know they are for me.

Sure, it sounds crazy that I often find myself with limited time to cook (because I’m a food blogger and all), but for all of the days that I’m actually cooking up recipes that wind up on the blog, there are several more that involve sitting in front of the computer all day to develop recipe ideas, edit photos, manage social media, answer emails, and all of that less delicious stuff. On those days, Mom’s Sloppy Joe Stuffed Peppers are a go-to in my house, and even though I make ’em all the time, James and I always get excited for them like they’re a special treat. 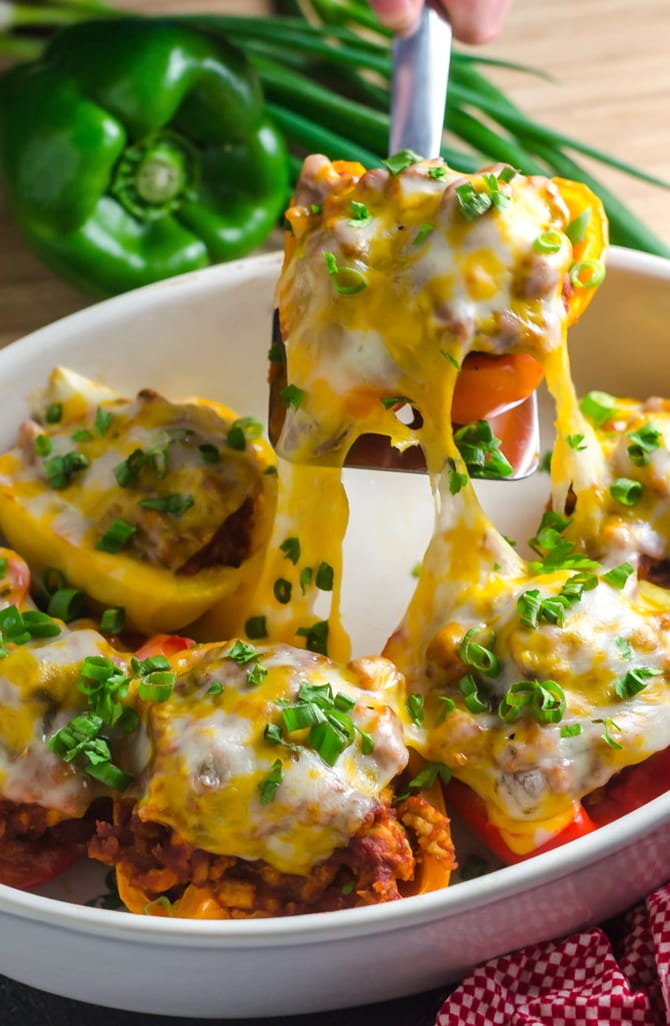 Oh yeah, did I mention that James is obsessed with these stuffed peppers? He even makes them himself sometimes… in fact, I think they might be the only recipe he’s ever made for us since we’ve started dating. If they’re good enough to get James to cook, you know they’re special.

I’m so glad that my mom was willing to share her special recipe with me, and after a little bit of persuading, gave me the go-ahead to post the recipe for you guys. I know you’re going to love them just as much as we do!