Obatzda Bavarian Beer Cheese Dip. This rich and piquant beer garden classic is made with just a few simple ingredients and is perfect to serve with pretzels or rye bread. 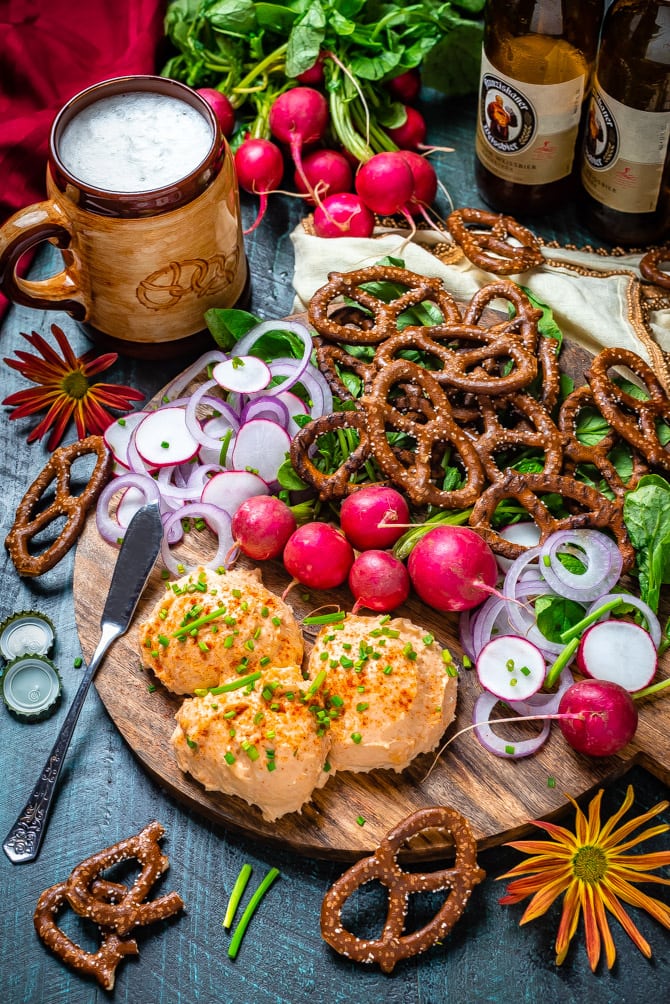 I’ve never been much of a traveler. Is that really uncool to admit? Okay, yeah, it is. But I like to be honest here, and while my bucket list is loaded with places to visit, a fear of flying and a million other excuses tend to keep me from following through. One day I’ll put on my big girl pants and push myself out of my comfort zone, but for now I do most of my worldly exploring through food. Dips, especially.

From Israel, there’s hummus. From Greece, tzatziki. Mexico gave us guacamole, and Switzerland brought fondue. But the signature dip of Germany– or more specifically, the German state of Bavaria– is still relatively rare in the United States. It’s called Obatzda, and it’s about time we all got more acquainted with it. 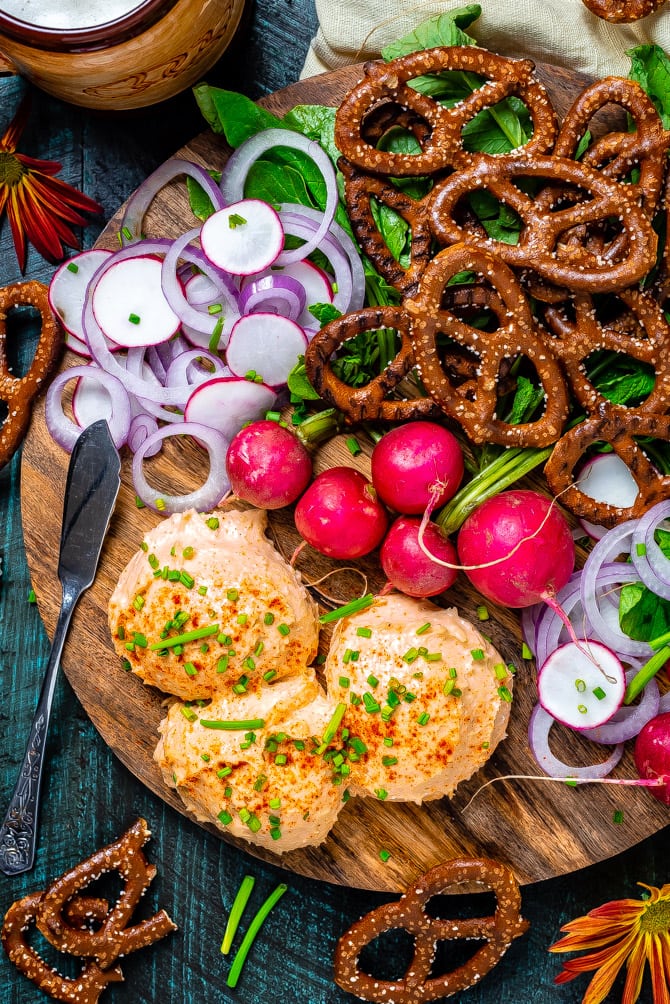 Obatzda, also known as Obatzder, Obazda, Gerupfter, or Gerupfter Käse, is a traditional Bavarian dip that’s a staple at beer gardens. The main ingredient is cheese– actually, two kinds– a soft, ripe cheese such as Camembert, and a spreadable cheese such as cream cheese. The cheeses are mixed together with butter, a bit of beer, lots of onions, and paprika until it’s all well-combined and salmon-colored.

While the onions and Camembert in the recipe might be off-putting at first to those who aren’t huge fans of those strong flavors, rest assured that the cream cheese and butter both do a lot to mellow some of the harsher flavors. James is absolutely not a fan of so-called “stinky cheeses”, but he absolutely loves this recipe. 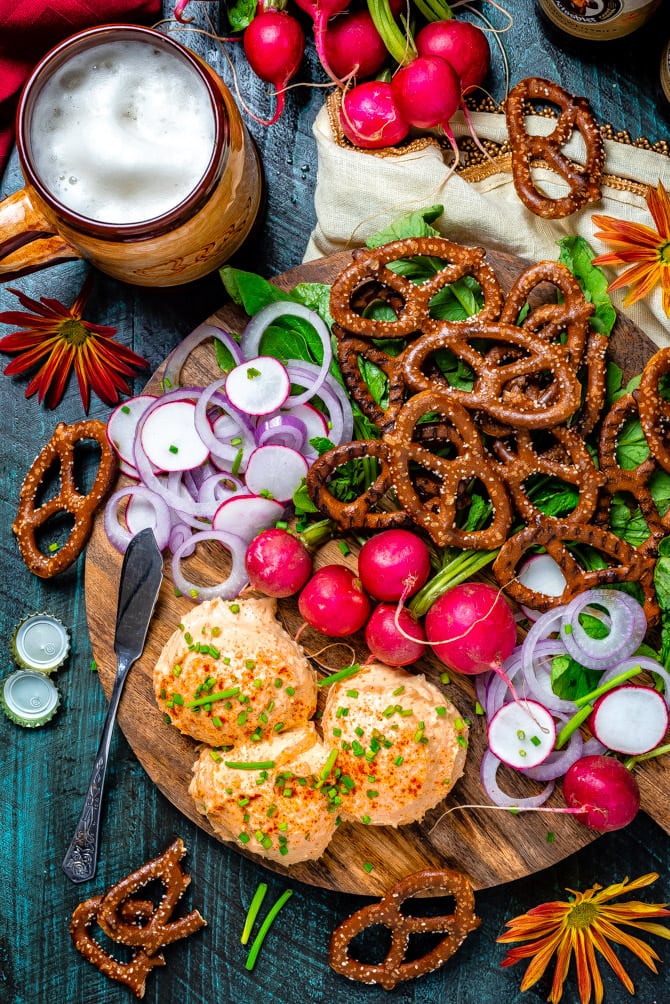 The apparent creator of the original Obatzda recipe was an innkeeper named Katharina Eisenreich, who began serving it to her guests as a snack to accompany their morning beer in the 1920s. First of all, cheers to the idea of a morning beer, and secondly, a cheesy snack on the side sounds like the perfect way to start the day, right? It seems that many beer gardens agreed with that sentiment, and they began to adapt Katharina’s recipe to serve at their own establishments. Obatzda has since become so popular and widespread that it’s now the official Oktoberfest cheese dip. 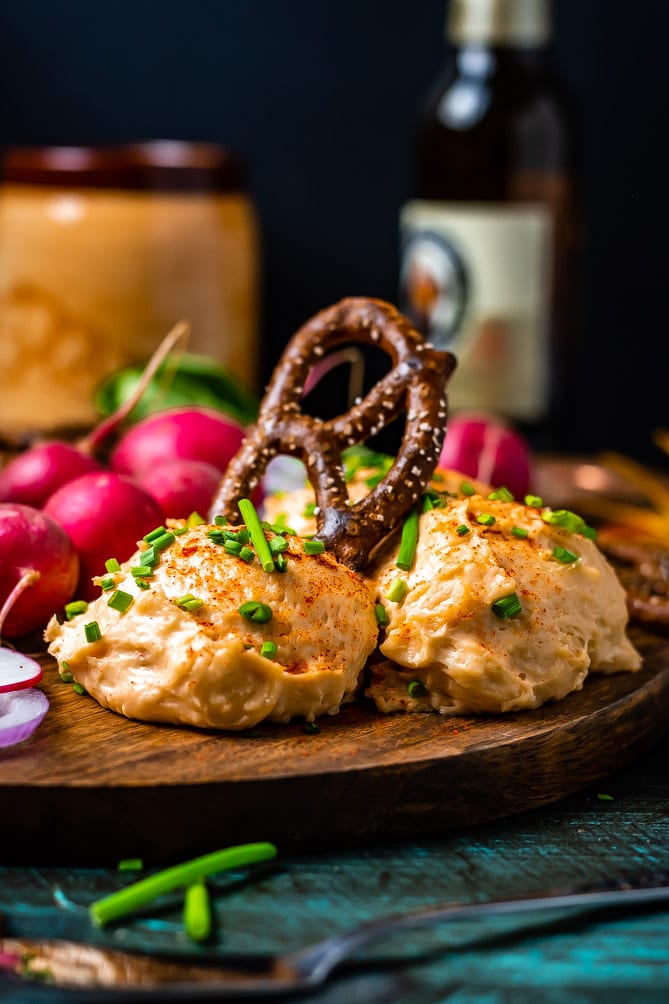 WHAT DO YOU SERVE WITH OBATZDA?

Obatzda is usually served with rye bread, radishes, sausages, pickles, and, of course, pretzels. While I don’t have a recipe for soft Bavarian-style pretzels (yet), I do love pairing Obatzda with my Homemade Mall-Style Soft Pretzels. In fact, you can see a little Obatzda in the pictures from that recipe’s photo shoot. No, it’s not a completely traditional pretzel pairing, but it’s delicious none-the-less.

I also love spreading Obatzda on homemade Pretzel Rolls, or pairing them with hard pretzels (the extra dark kind are my favorite) as you see in the photos here. But if you’re not a stickler for authenticity, you can serve the Bavarian cheese dip with chips, crudités, crackers, or get even more creative.

No matter how you serve it up, you’re going to love this recipe and want to remake it again and again. 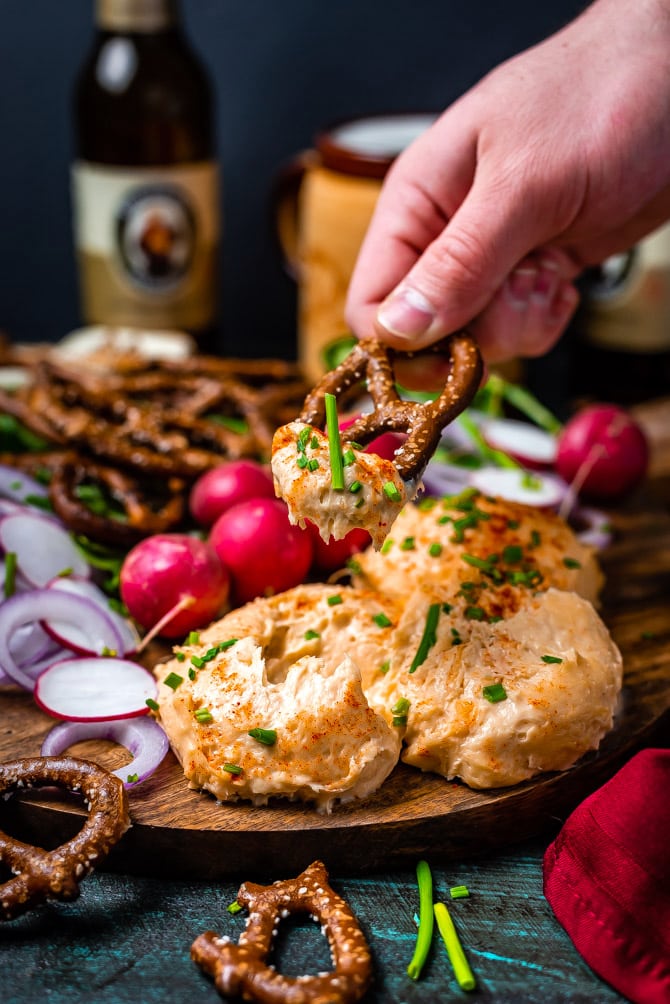