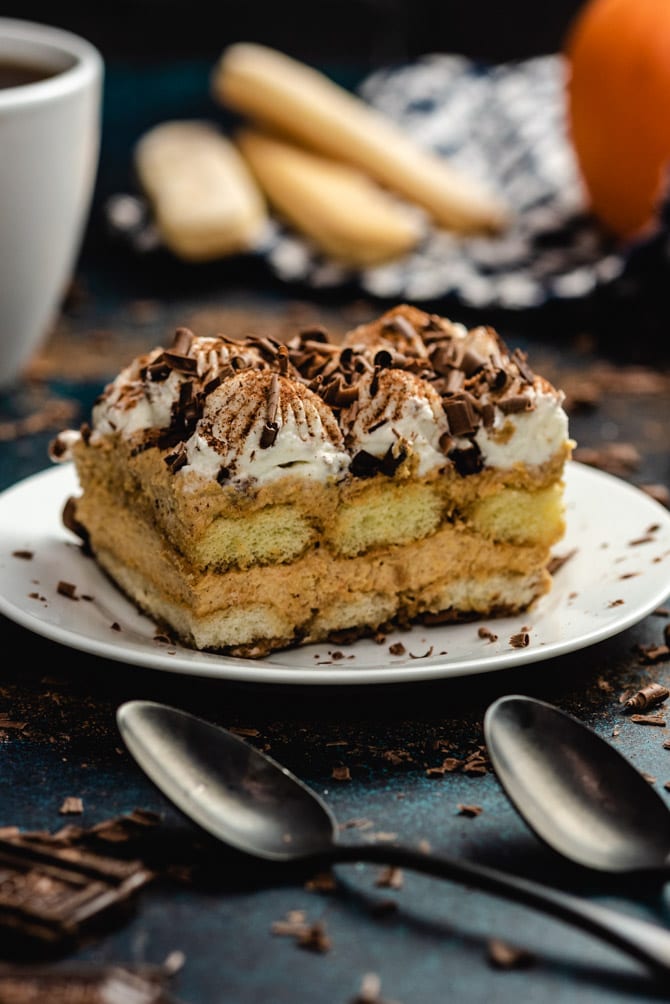 I may or may not have gone overboard at the grocery store when stocking up for my Pumpkin Bread testing last week, which (again) may or may not have resulted in James and Mike being– uh– less than happy over the fact that I filled a solid third of our cabinet space with canned pumpkin puree. You can’t keep doing this, they said. We need room to store our food. We can’t just eat pumpkin every day.

Well joke’s on them because I decided to use up all of the extra cans in this Pumpkin Spice Latte Tiramisu and I have been eating it every day.

There was a lot of tiramisu. It’s too tasty to let it go to waste. What else can I say? 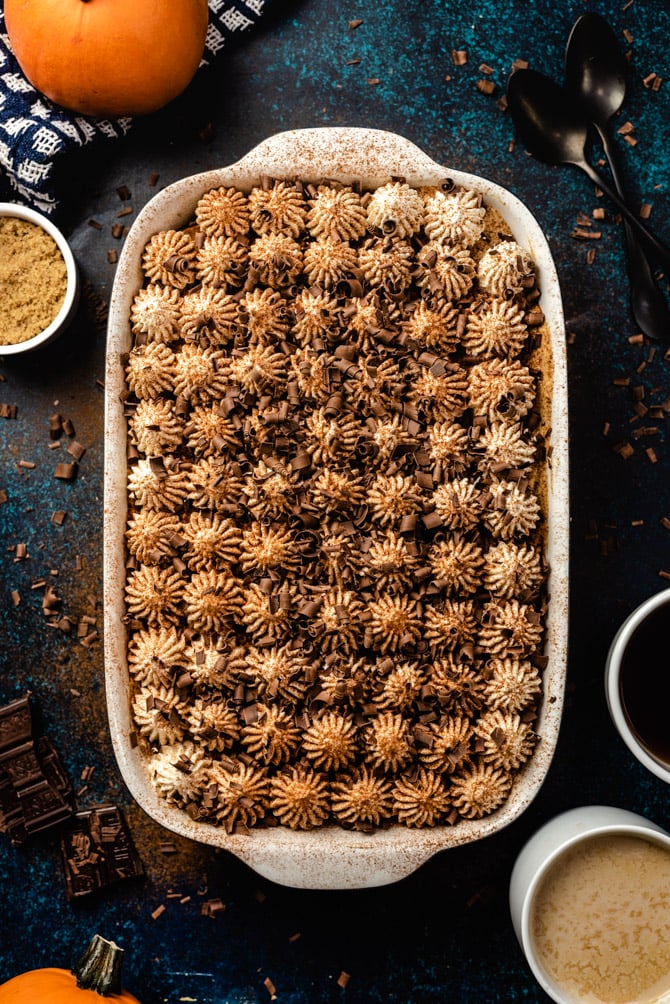 Now honestly, I’m not a fan of just cramming pumpkin haphazardly into every recipe conceivable simply because it’s Fall. Pumpkin spice sausages? Pumpkin pie potato chips? Pumpkin spice queso? (Yes these are real things and someone, somewhere has made the poor decision to eat them.) That’ll be a resounding NO from me, dog.

But there are some dishes– pies, coffee, cakes, and cookies, for example– that allow the sweet, smooth pumpkin (and a gratuitous amount of pumpkin spice) to truly shine. And, as it turns out, tiramisu is one of the best. Mascarpone cream, pumpkin puree, and whipped cream create the light and airy mousse, while the traditional coffee-and-liqueur-soaked ladyfingers bring the java flavor to this Pumpkin Spice Latte Tiramisu. It’s luscious, smooth, dusted with cinnamon and chocolate shavings, and leagues more satisfying than simply sipping your pumpkin spice drink. 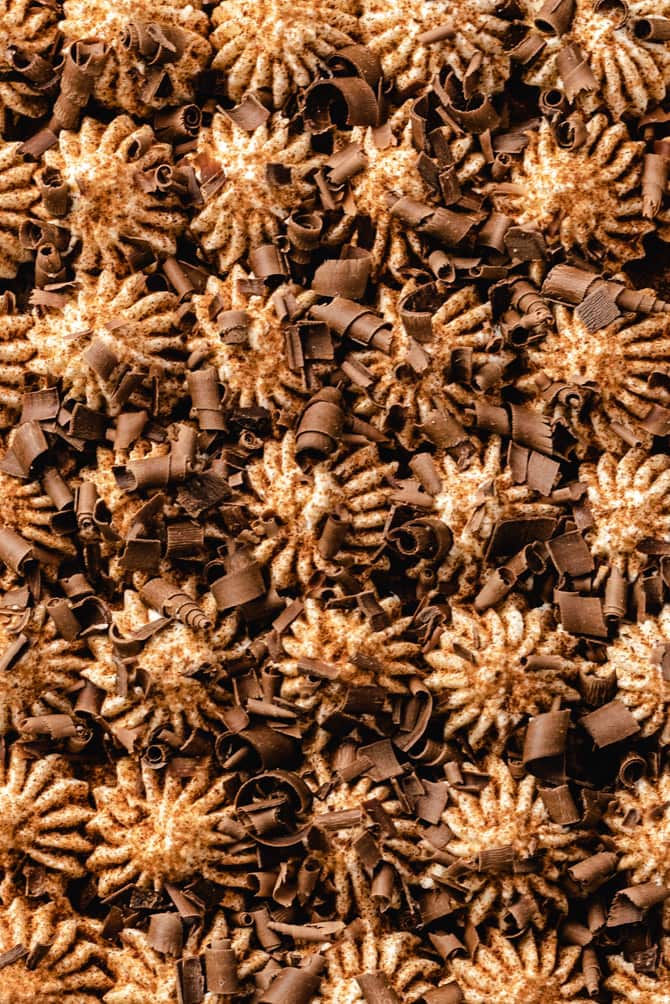 Unlike your usual pumpkin desserts, pumpkin tiramisu doesn’t require for you to bake it ahead of time– if fact, you simply incorporate the pumpkin puree straight from the can and refrigerate the mixture before serving. The best thing about these sorts of no-bake desserts is that you don’t have to use up any oven space while preparing your elaborate holiday dinners. Yeah, you might want to keep this one in mind for Thanksgiving– a turkey in the oven is no problem here!

Now, while tiramisu of any sort is never baked, they do often include raw eggs in mousse mixture, which makes some people uncomfortable, especially when serving young children or elderly people. To avoid any potential issues, you can temper the eggs for traditional tiramisu before using them, which makes them safer to eat. HOWEVER, you don’t have to fuss with it here! There are no added eggs in this Pumpkin Spice Latte Tiramisu. Instead, canned pumpkin lends the necessary richness and texture to the mousse– you don’t miss the eggs at all. 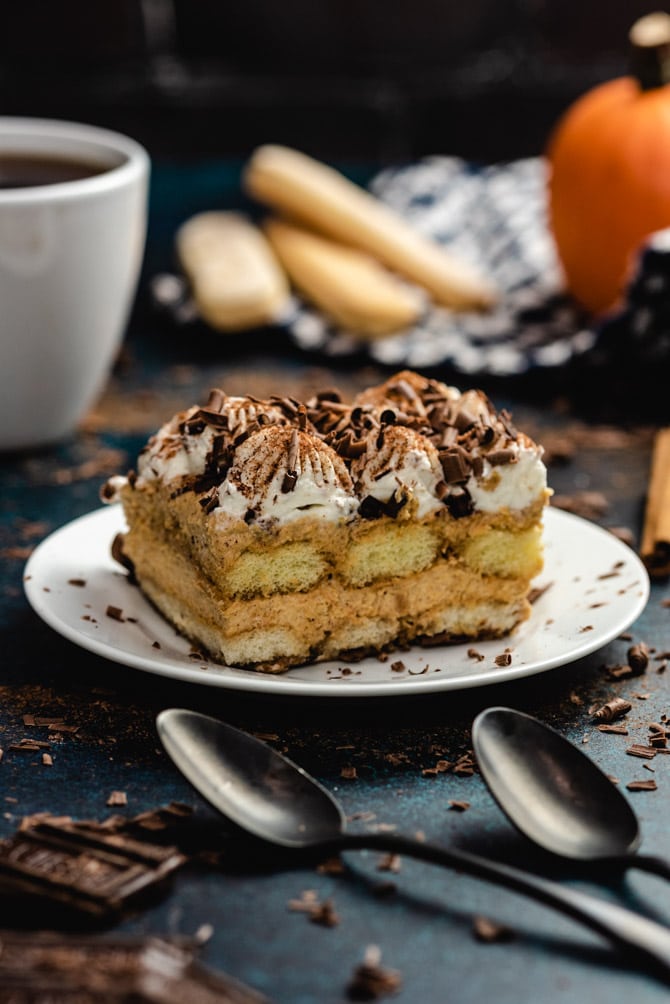