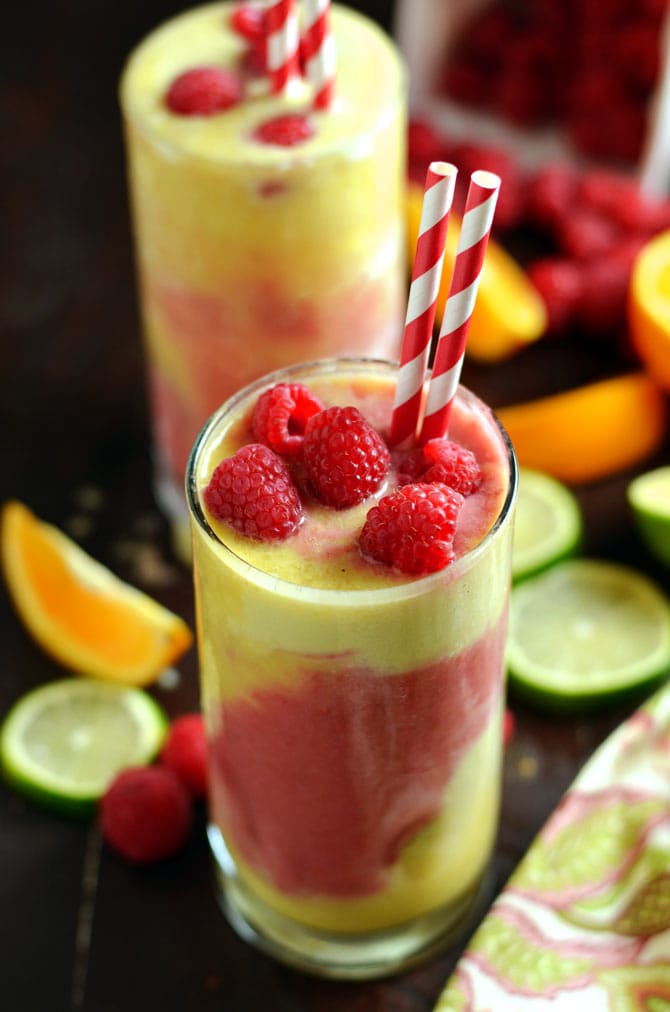 Every time I sat at the bench at the entrance of Sunnyside Farms, that fat, old black dog would waddle over and plop down in front of me, resting his back against my leg, looking up at my ice cream cone impatiently.

Sunnyside Farms was my absolute favorite place as a kid, although to us it was always “The Cows”, called such because of the dairy cows that were just to the left of the deli shop. For nearly a decade I got rainbow sherbet there at least once a week, gave the dog the remnants of my cone (as everyone did), and then with colorful, sticky fingers, reached for the cows who would lick them until my mom pulled me away and slathered me with hand sanitizer. I really miss that place. 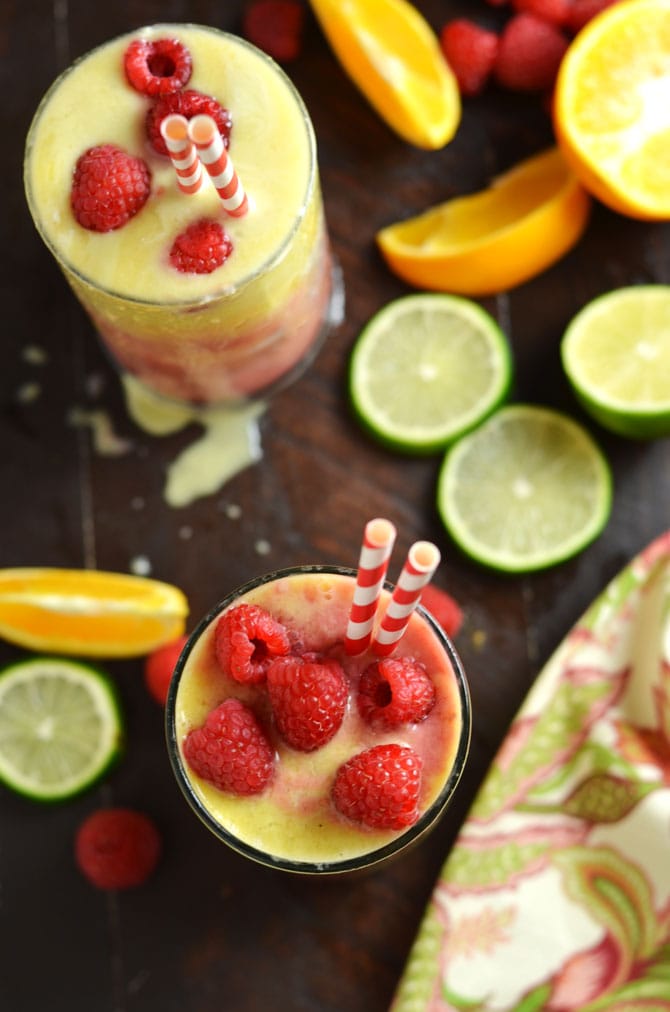 I was feeling nostalgic this week, so I decided to make a spin on my old favorite frozen dessert for these warm-weather days we’ve been having: Rainbow Sherbet Smoothies.

There’s no actual scoops of premade sherbet in these, though. Instead I decided to make smoothies using the typical rainbow sherbet flavors of raspberry, lime, and orange, but with real, fresh fruit, and mix them together for creamy, sweet smoothies that are as much of a treat as they are healthy.

By the way, I have for 100% of my life– for all of those years that I went to Sunnyside Farms and beyond– thought it was sherbert, with an “r”. Am I alone in this? I had to go back through this post and change all of the sherberts to sherbets and it just feels so wrong. It’s like when I found out that it was always the Berenstain bears, not the Berenstein bears. It’s messing up my childhood memories. 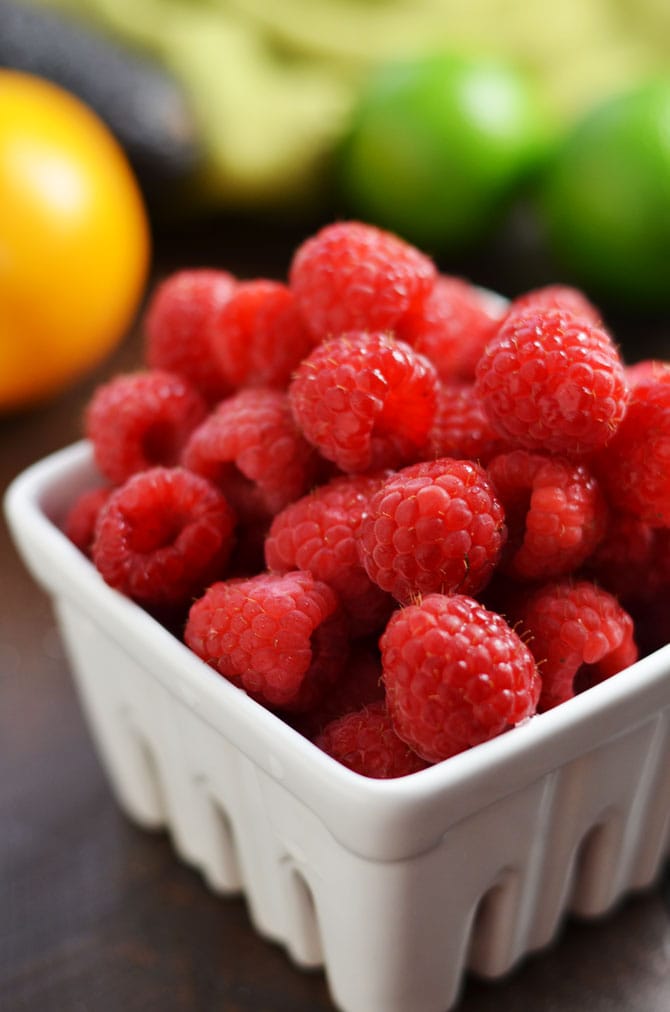 Back to the smoothies. So, I’m going to be honest, these aren’t those 3-ingredient smoothies that I keep seeing everywhere, they’ve got a bit more going into them. But each ingredient has its place in the flavor story. The cast of characters includes oranges, orange juice, raspberries, lime, banana, avocado, honey, coconut-almond milk, and ice. They wind up tasting like you made rainbow sherbet with a bunch of fresh and healthy ingredients, with a slightly Caribbean-esque twist.

Now, if putting avocado in a smoothie seems weird to you, don’t worry. I didn’t have high hopes for it when I decided to try it either. In the end, though, it made the smoothie so much creamier, contributed to the green of the lime sherbet smoothie portion, and is a source of healthy monounsaturated fatty acids, vitamins, and minerals. Since the recipe only needs half of an avocado, rub the extra half with a little lime juice, wrap it tightly in plastic wrap, and refrigerate it to use in your smoothie the next day, because seriously you will want one the next day. 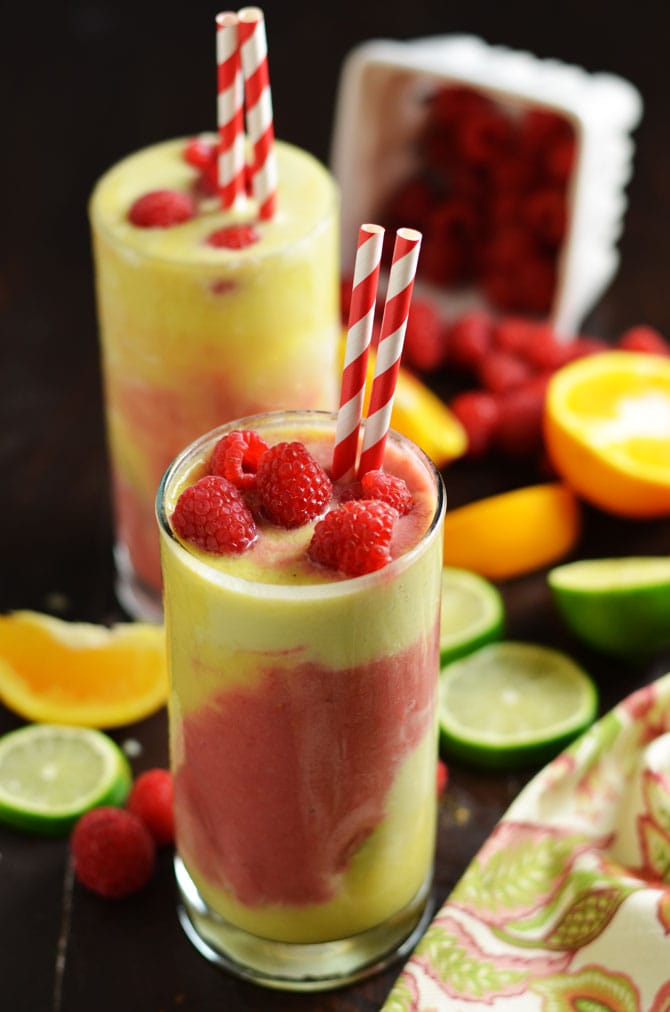 And on that first or second day of Rainbow Sherbet Smoothie drinkin’, don’t forget to take a picture and tag #hostthetoast on Instagram or Twitter as always! Let me know if it brings back memories of your favorite ice cream place as a kid.

For the Lime Smoothie:

For the Orange Smoothie:

For the Raspberry Smoothie: