When I grow up, I’m going to be a paleontologist.

That is what I would have told you when I was in grade school. (It was a slightly more attainable goal than the previous year’s career aspiration, which was to actually be a dinosaur.)

I was obsessed with dinosaurs, and my room was covered in drawings of all sorts of prehistoric creatures.  I could tell you everything you ever wanted to know about dinosaurs, and everything you never cared to know, too.  Even if you tried to politely walk away from my dino-conversation, I’d follow you, spewing out Stegosaurus facts until you just couldn’t take it anymore.  In fact, I wouldn’t even stop then. 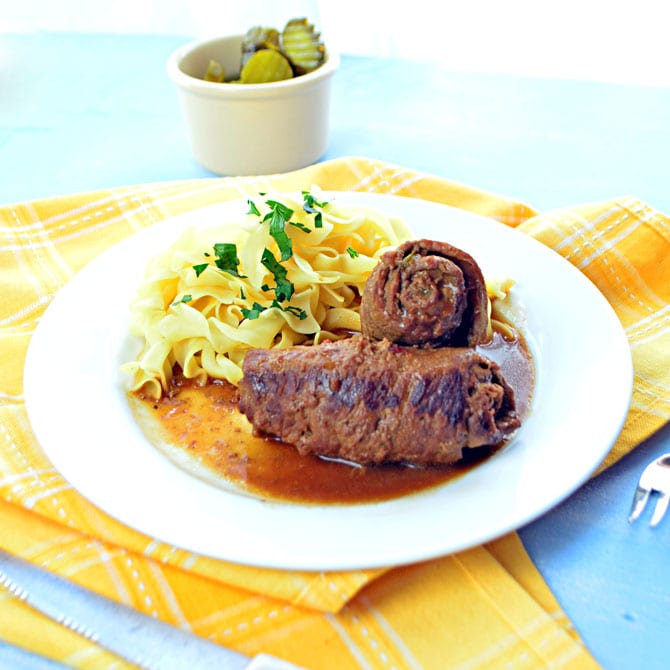 At some point after that, I decided that dinosaurs were less fun than many other animals.  This was mostly because dinosaurs are dead and, due to that minor detail, they couldn’t lick your face or play fetch or do much of anything besides stay dead.  Then I saw Jurassic Park and decided that if dinosaurs did come back to life, they wouldn’t be the sorts of animals I wanted to be around, anyway.  Dogs were much less likely to– you know– eat you whole, so I decided I was going to be a vet when I grew up instead.  The drawings lining my walls quickly changed from T-Rex to terriers.

Then more and more drawings began to appear on my walls, not just of animals, but of anything I could sketch.  I was a very talented artist as a child and only got better as I grew older.  I often volunteered in my art classes to help other students learn proportions or techniques, and even eventually went to other art classes and helped kids there, too.  It wasn’t long before I decided that I would make a great art teacher, and everyone I knew agreed.  No other occupation could have been a better fit for me.

I went to college prepared to get my Bachelors of the Arts, and I toted my humongous portfolio and box of art supplies all around miles of New Brunswick with me every day between classes, with only the occasional complaint.  With my roommate’s consent, I bunked our beds to create more space for me to lie out canvases on the floor and paint in our dorm room.  I sat outside by the tennis courts and sketched campus scenery whenever I had an hour or so to spare.  I enthusiastically did all of the work assigned in my art classes and got very good grades.

And so here I am today, — an art teacher! a food and drink blogger!

Don’t see how that happened?  Neither does anyone I know, especially because I didn’t really start cooking meals until about a year and a half ago.  I didn’t even boil pasta before my sophomore year of college. 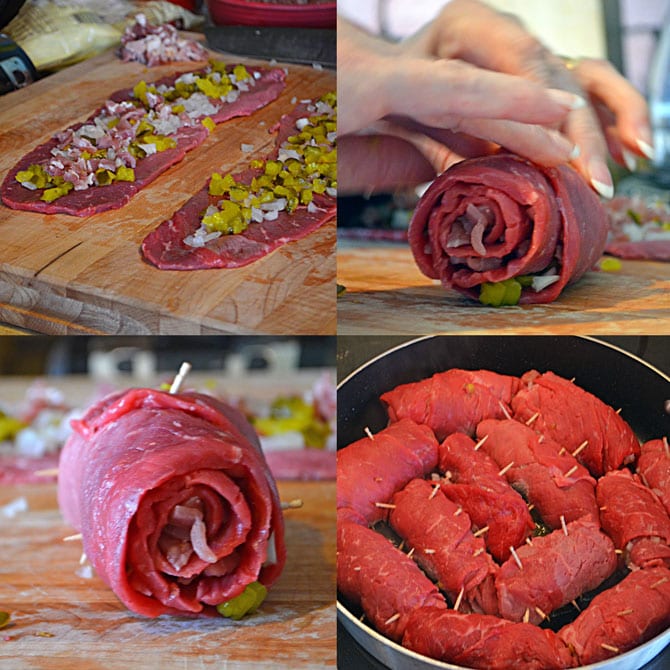 But when they say, “When did you become interested in cooking?  What happened to art?” — and trust me, they always say that —  I don’t know how to respond.  The truth is, I’ve been interested in cooking since I was little, because it is an art.  I just didn’t realize I could do it.

I came to this conclusion at a young age, after watching my Omi make some of her renowned German dishes while visiting in Michigan.  She would start combining ingredients early in the morning, putting in a pinch of this and a coffee cup full of that, mixing with her hands and sharing the occasional “German” cooking tip.  The way she cooked was unlike anything I had ever seen, and I loved to watch her.  My parents cooked when we were home, but they cooked quickly and efficiently.  My Omi, on the other hand, had a sort of tenderness in her process and product that fascinated me.

The way she used her whole body to rhythmically knead the dough for Dampfnudeln would transfix me.  Her Rouladen were perfectly formed little rosebuds of meat that looked prettier than anything I could ever put on paper.  All of her dishes intrigued me with their colors, their shapes, the techniques behind making them, the balance of textures, and of course, the flavors.

It never crossed my mind that I could one day be capable of cooking like that, of making little bits of bite-able art.  It seemed so impossible to learn, as though my Omi had been born a kitchen savant.  I couldn’t do that, I told myself, and never considered that I might be able to—until my Omi visited last week. 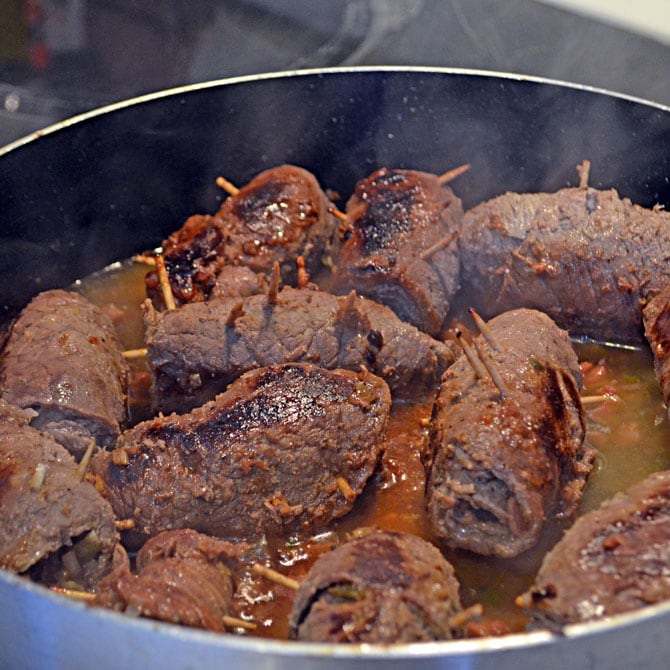 Rouladen is the comfort food of Germany.  Pickles, onions, and bacon create a flavorful filling for tender beef, smothered with rich brown gravy.  Usually, Rouladen is served with spaetzle, potato dumplings, or egg noodles to sop up some of the delicious gravy.

Every German makes their Rouladen differently, and my Omi is no exception.  She replaces dill pickles with bread and butter pickles in the filling, and she doesn’t use any mustard or horseradish.  However, when you make yours, feel free to switch it up according to your own preferences.

Rouladen take a decent amount of time to make, but they’re really not hard to do at all.  The time isn’t even a big deal when you get a taste—it’s simply amazing.  My Omi’s Rouladen has become one of the most requested meals in my family, and I’m sure it will be a hit with everyone you feed, too.

I thought about keeping this recipe a family secret, but it just wouldn’t be fair not to share something this good with you.  I can’t hold out on you like that.  After all, I once wanted to be a teacher, and there’s nothing I’d rather teach you than how to make one of my favorite meals.  Enjoy! 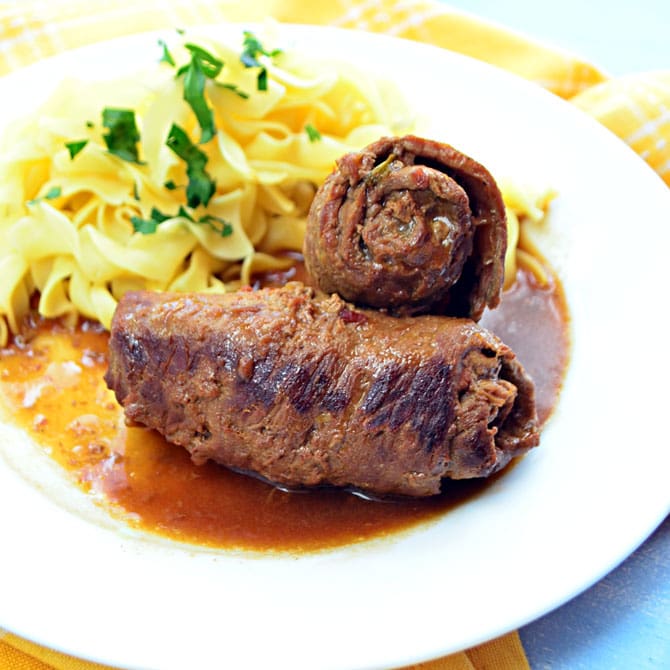 German Rouladen
Recipe Type: Main
Cuisine: German
Author: Morgan
Prep time:
20 mins
Rouladen are a staple of German comfort food. Pickles, onions, and bacon create a flavorful filling for tender beef, and it all is drenched in rich brown gravy. This is my Omi’s recipe, just as she learned it from watching her mother in Germany.