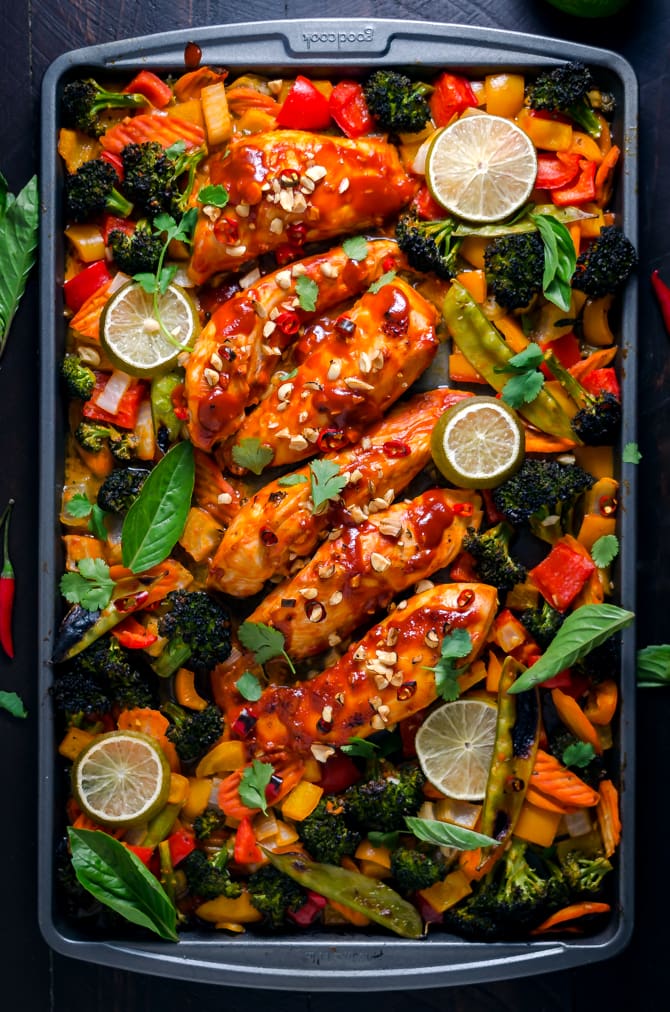 As a well-established one-pot recipe fanatic, it should come as no surprise that their oven-based brethren, sheet pan recipes, have found their way into my heart. Place veggies, meats, sauces, and more on one tray, then simply roast away? Yeah, you know I’m in.

Now, I’m not some sort of weirdo who’d pick veggies over a bag of chips on most occasions– let’s get that straight right off the bat. But still I’ve gotta tell you, when you roast veggies like this, all tossed in a delicious marinade, letting them deeply browned in spots… it’s a treat. No I’m serious, the vegetables are something you LOOK FORWARD to eating, and even more so because you know they’re good for you. 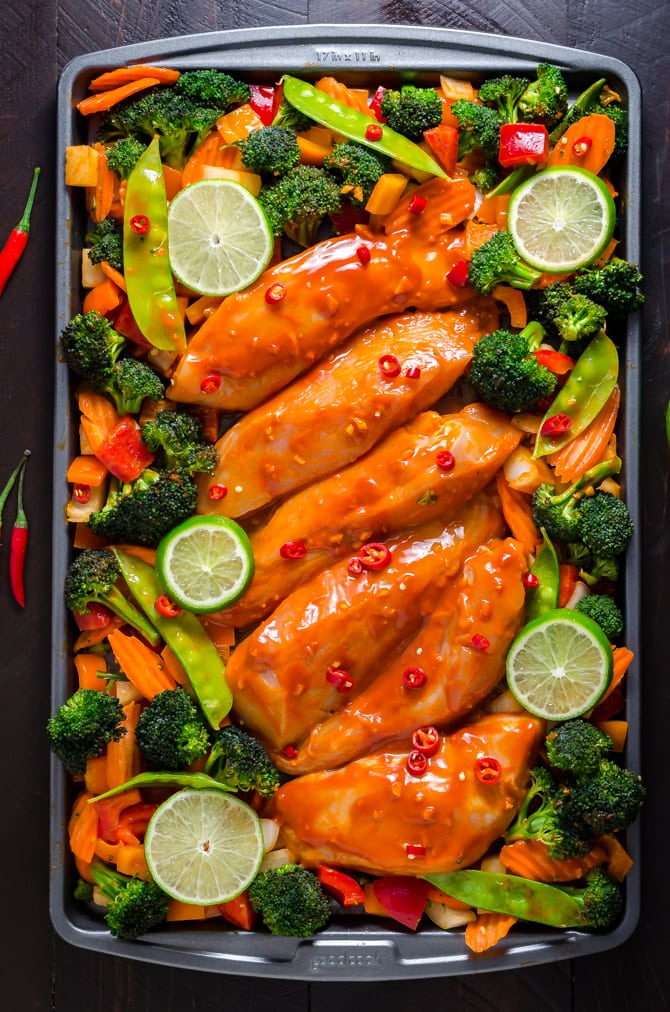 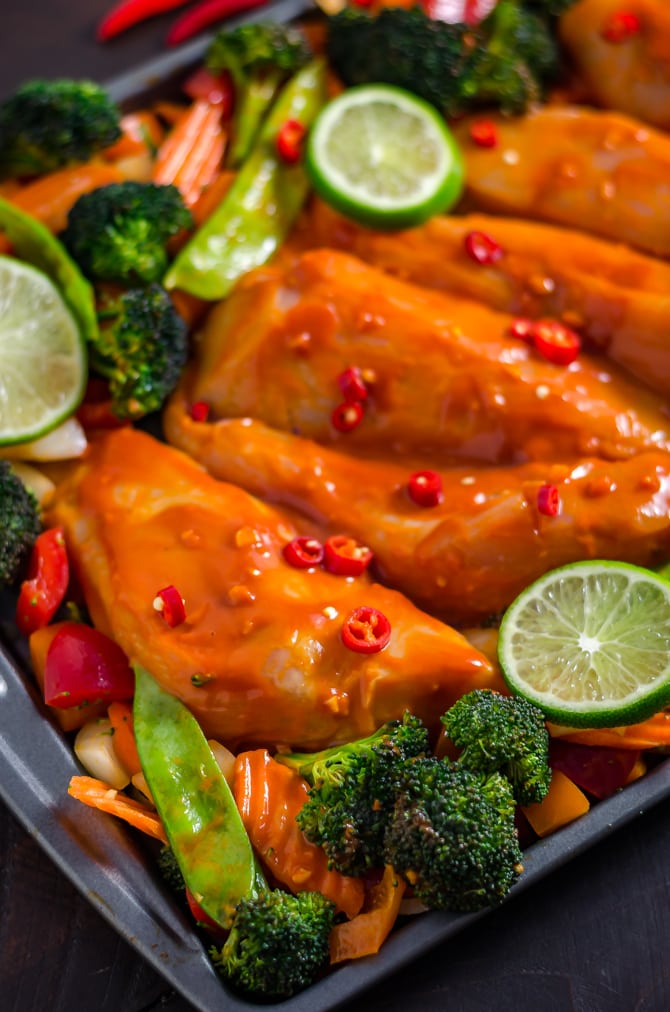 There were only a few vegetables leftover from this Sheet Pan Thai Peanut-Chili Chicken yesterday and as James and I were trying to divvy up our dinners, I couldn’t help but laugh at how passionately we were making our cases to have the lion’s share of them. We were each ready to sleep on the couch if it meant we got some extra broccoli. We were willing to fight dirty for the snow peas.

And of course the veggies aren’t the only things to love about this sheet pan recipe: let’s just talk for a second about this saucy, slightly sticky, perfectly cooked chicken breast. 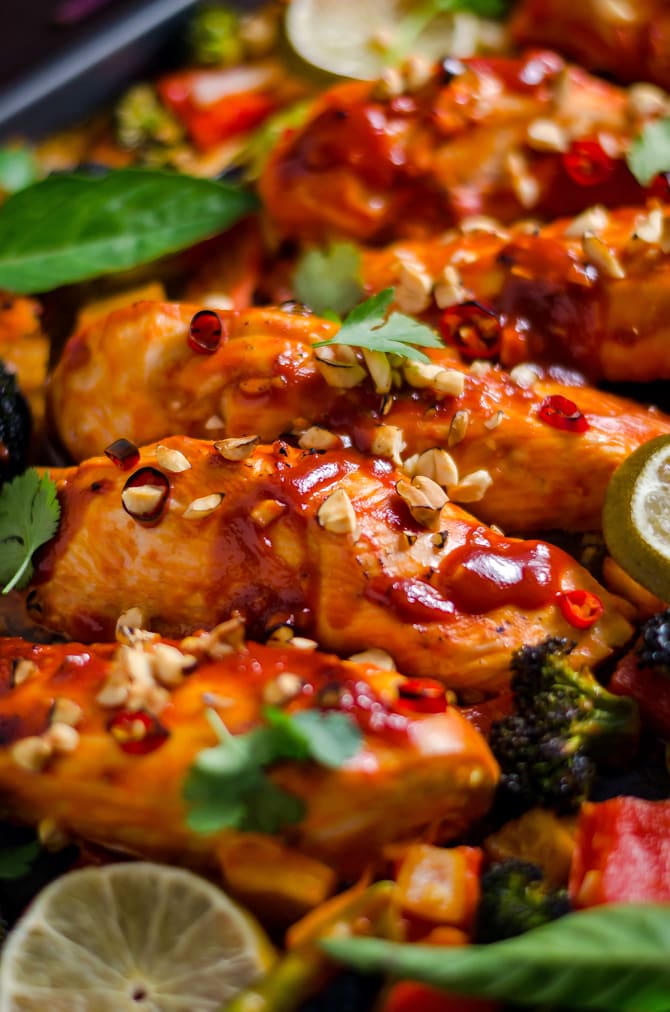 Honestly, I generally try to use chicken thighs in place of chicken breast these days, simply because thighs stay juicier and more tender when cooked. However, I’ve been trying to incorporate more lean proteins into my meals lately since my whole house is on a “we live by the beach and aren’t swimsuit ready so let’s get it together” kick, and chicken breast fits the bill. I’m happy to say that the chicken breast wound up cooking perfectly and didn’t dry out at all. Probably thanks to the marinade-slash-sauce that it’s slathered in! 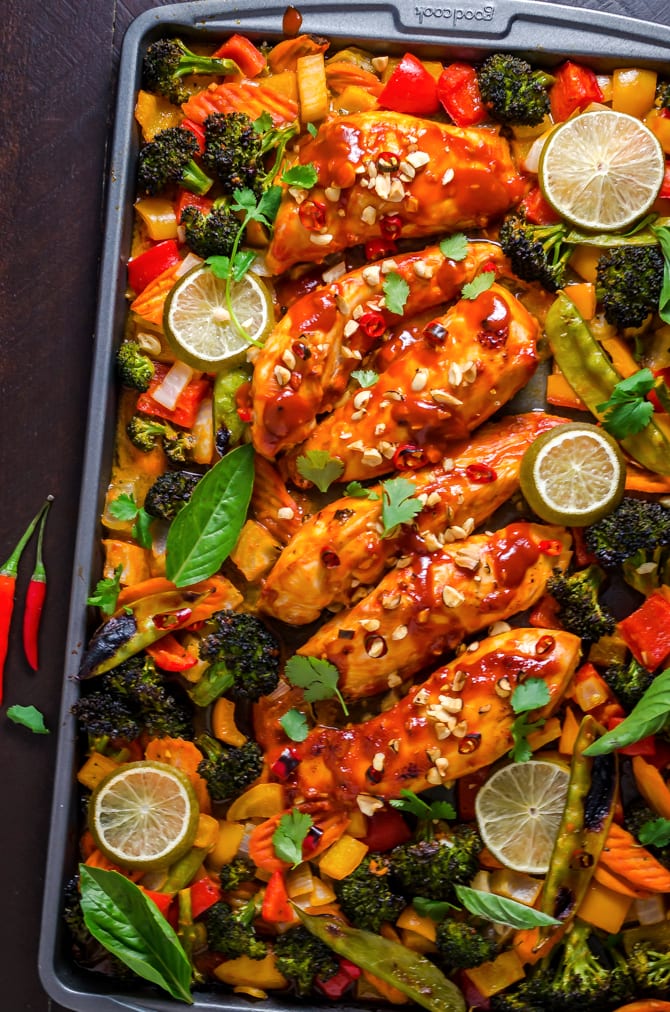 What’s the sauce made of? It’s a simple mixture of Thai sweet chili sauce, lime juice, soy sauce, peanut butter, garlic, and ginger. And though it doesn’t require a ton of ingredients, it packs in a ton of flavor, preventing our chicken breasts and vegetables from being bland and boring. I like to use some of the sauce to marinate the chicken for at least a half hour, toss some of the marinade over the vegetables, and reserve a bit for brushing on the chicken after its cooked. It’s important to keep that last bit separate because you don’t want to brush your cooked chicken with anything that’s been in contact with raw chicken, of course. Don’t worry though, there’s plenty of sauce to go around. 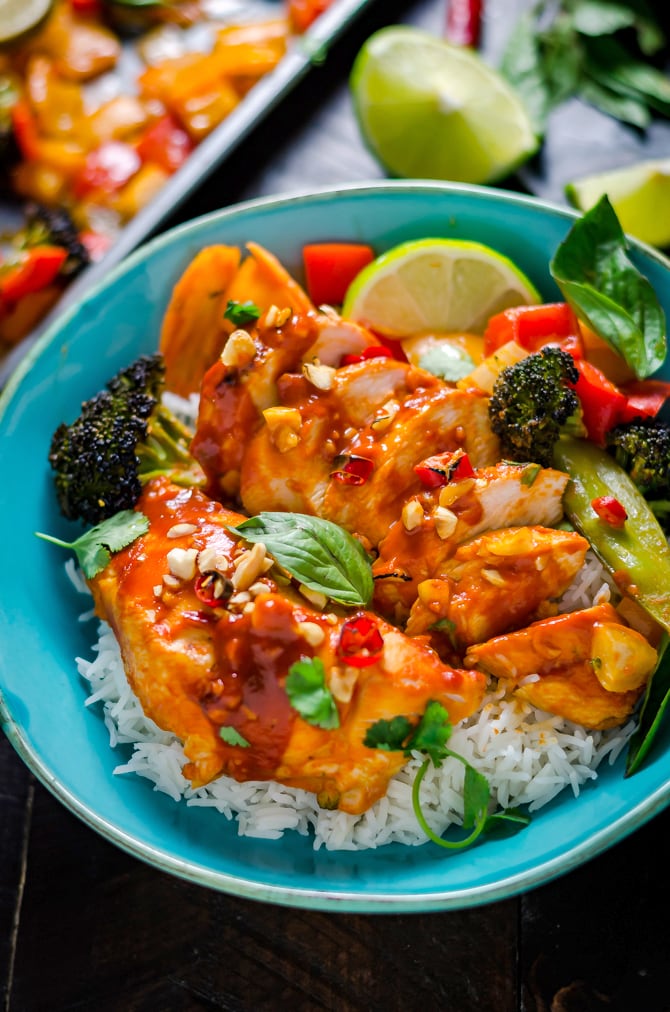 James kept saying that this Sheet Pan Thai Peanut-Chili Chicken looked like I worked really hard on it for how quickly I was able to throw it together, and I agree. I didn’t even have to buy the vegetables all separately, I simply grabbed a bag of stir fry vegetables that included broccoli, snap peas, and carrots, and mixed in some chopped bell peppers and onions. And you could really use whatever you happen to have in your house instead, if you prefer– zucchini and cauliflower would also both be great, for example!

So what do you say? Are you going to make Sheet Pan Thai Peanut-Chili Chicken this weekend? It’s a recipe you’re going to want to make ASAP. (And when you do make it, don’t forget to take a picture and tag #hostthetoast on Instagram to show it off!)