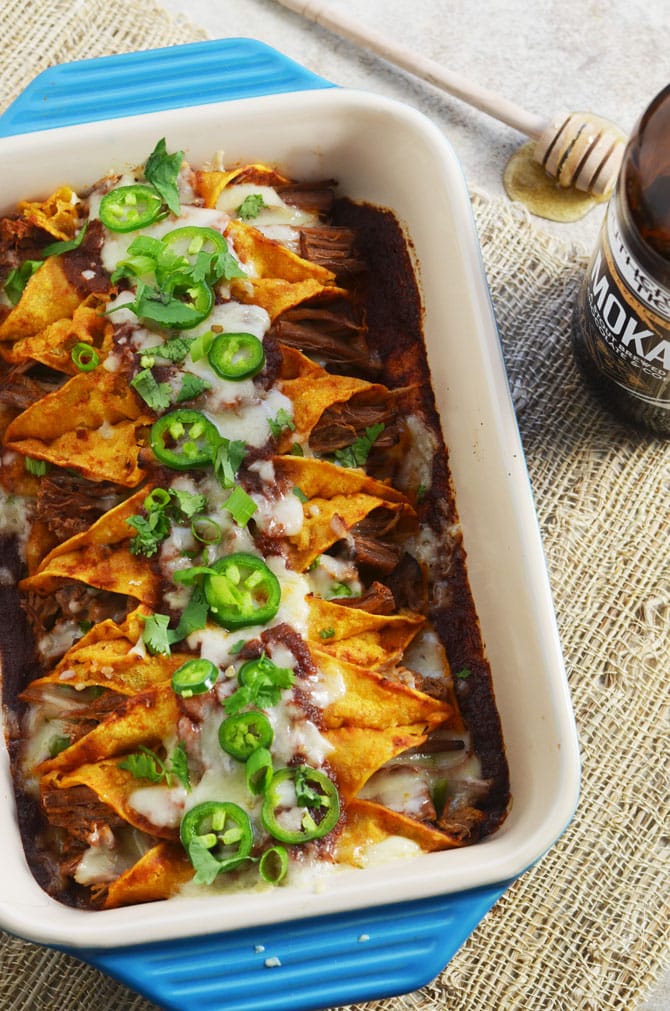 Can you believe that it’s already August? Where did the summer go? We’re just over a month away from swapping out lemonade for pumpkin lattes and, you guys, I’m so not ready for the sun to start setting before I leave the office. We’ll be packing away our swimsuits and taking out our sweaters in no time. NO. Nooooo!

Wait, I’m totally getting ahead of myself here, aren’t I? There’s still plenty of glorious sunshine left and we’ve still got time to tick off boxes on our summer “To-Do” checklist. I’ve got a vacation coming up (yes, an actual vacation, as in I am leaving the state of New Jersey and not doing work for a whole week… can you believe it?) and I’ve got a ton of warm-weather recipes in the queue before Fall settles in. Make the most of what’s left, right? Right. 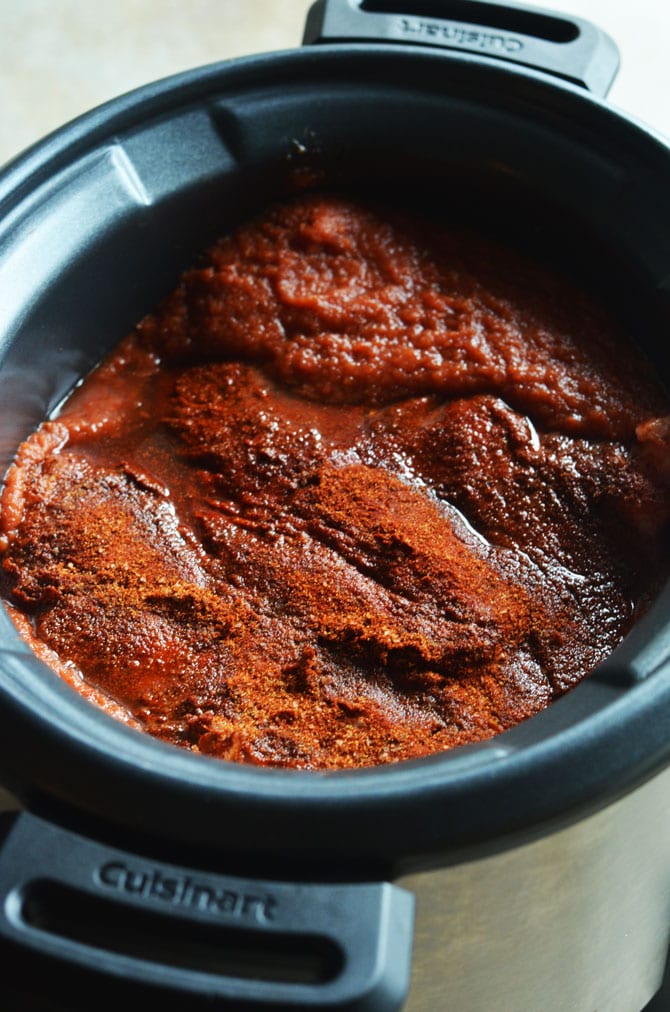 Since we’re in agreement about making the most of things in this next month, I’m here to introduce you to a recipe that you need to put on your summer menu: Slow Cooker Honey Chipotle Stout Enchiladas. The beef is cooked until tender and juicy right along with the homemade enchilada sauce in the slow cooker. Then you’re free to use it in typical enchiladas (with plenty of cheese, to boot) or in enchilada skillet form, if you prefer to skip the rolling step.

As you’re well aware if you’re a regular ’round here, I’m unbelievably indecisive. Being as I am, I like to make both the rolled enchiladas and the skillet version, since there is a ton of meat and sauce to go around. I even save some for breakfast leftovers, which I use up in Frico Egg Breakfast Tacos. Don’t worry, I’ll have a recipe for those up soon, so be sure to check back in for it. 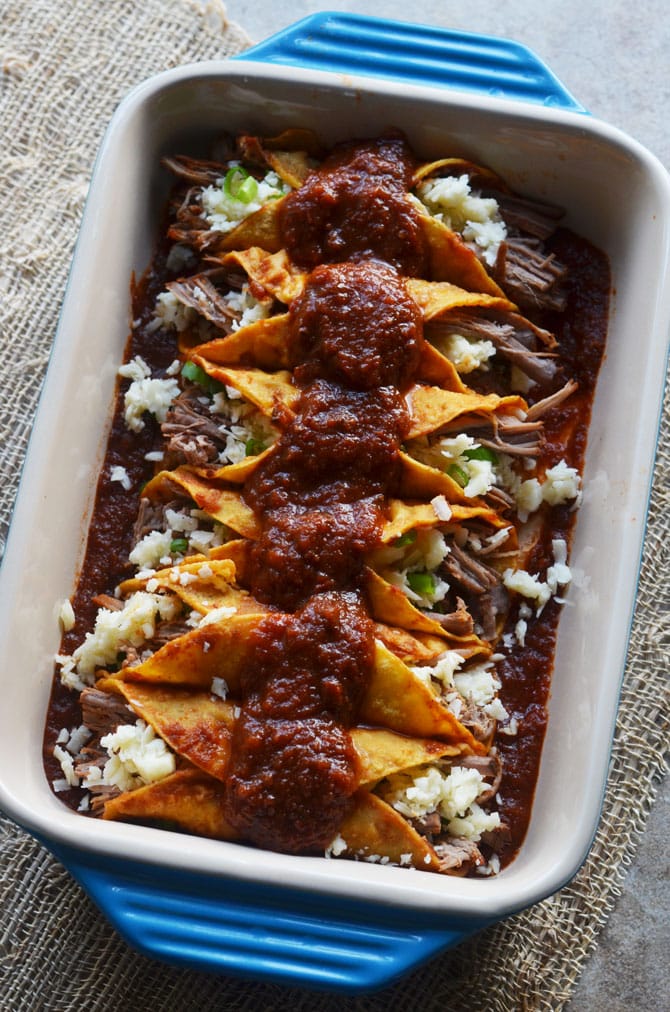 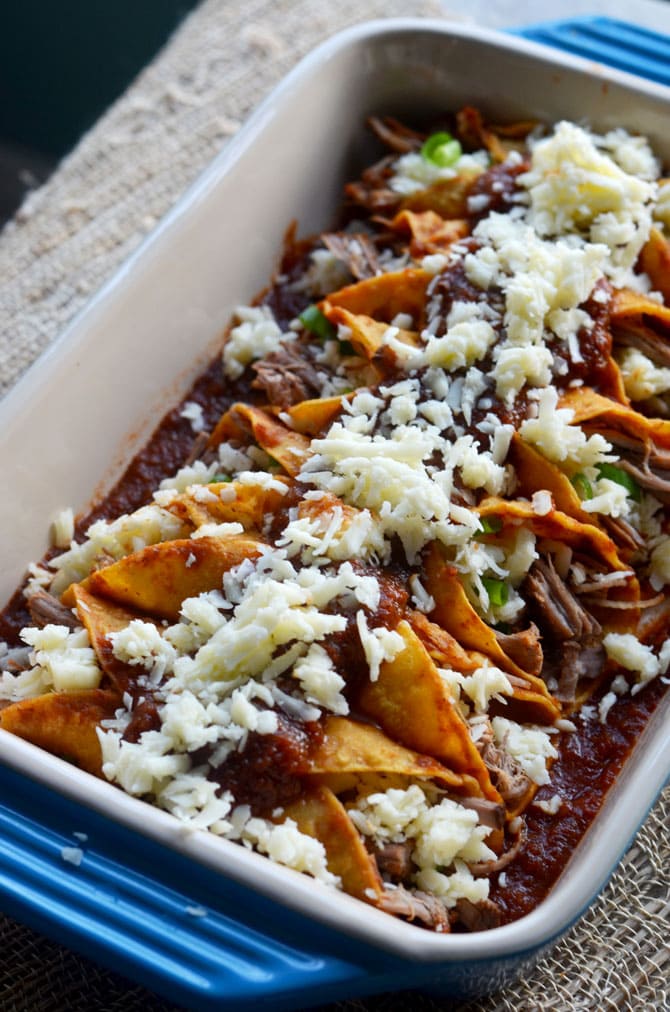 But back to these enchiladas. I tweaked my typical Homemade Enchilada Sauce to add some extra depth with beer and some sweetness from honey, and eliminated some of the liquid to make it slow-cooker friendly. What resulted was almost like a BBQ sauce – enchilada sauce hybrid in terms of flavor, AKA completely and utterly delicious. Don’t believe me? You’ll just have to try it for yourself, then. 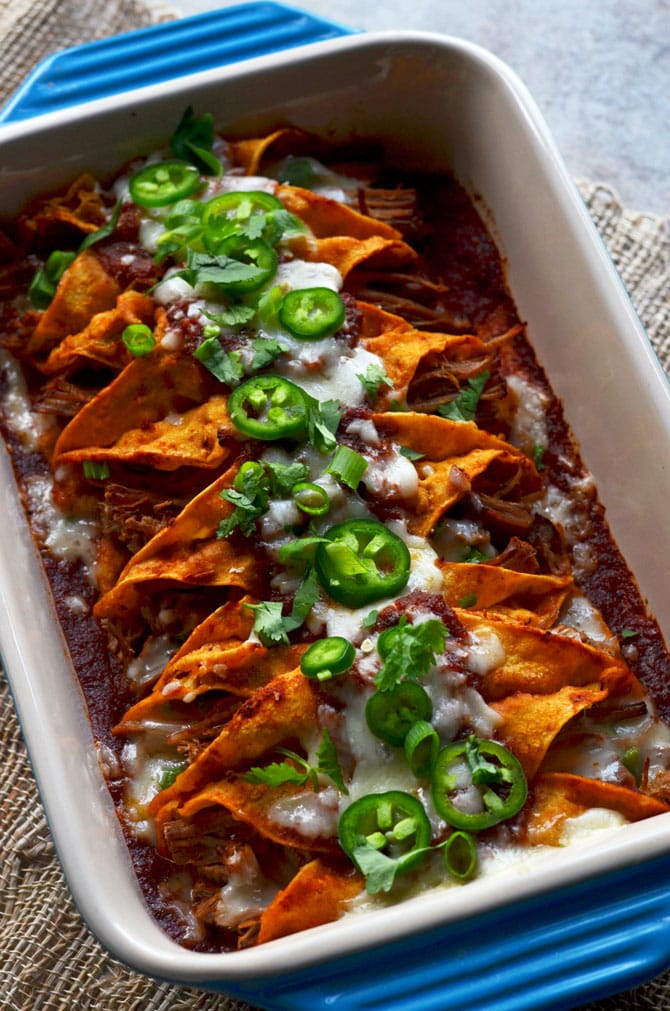 I’ve written the recipe below for a full set of enchiladas, but feel free to make a smaller batch and use the remaining beef and sauce for leftovers, nachos, or to make a enchilada skillet with them. (I typically do all of the above– it’s all about the options, baby!)

I’ve also included a note for how to make the skillet at the bottom, which is adapted from my Vegetable Enchilada Skillet. 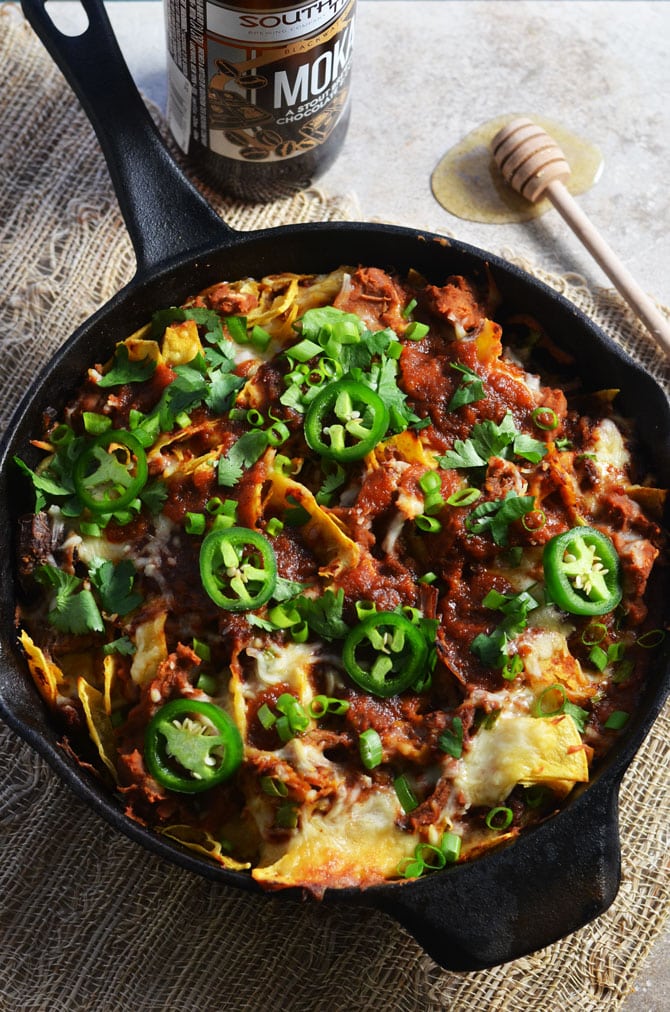 No matter how you serve the enchiladas, I promise you, you’re going to love them. My brother said this was one of the best meals he’s had all summer– and he’s been home from college taste-testing everything I’ve made over the past few months. James hardly said anything about these enchiladas, but that’s purely because he didn’t spend a second without a mouthful of them. I did catch a few groans of approval and a thumbs-up from him though, so I think I can safely assume that he enjoyed them as much as the rest of my family did.

When you give them a go, be sure to take a picture and tag #hostthetoast on Instagram or Twitter to show ’em off in the feed, and let me know how you plan to make the most of your remaining summer days!

For the dry rub:

If you’d like to make the skillet version, cook in the slow cooker as described. Then, cut up the tortillas into strips, heat oil in a large, oven-safe skillet, and combine tortilla strips, brisket, refried beans, cheese, and enough sauce to coat everything, and stir until well-distributed. Top with additional cheese and sauce, as desired, and baked at 350 degrees F until the cheese is melted and bubbly. Garnish with jalapeno, green onion, and cilantro before serving.