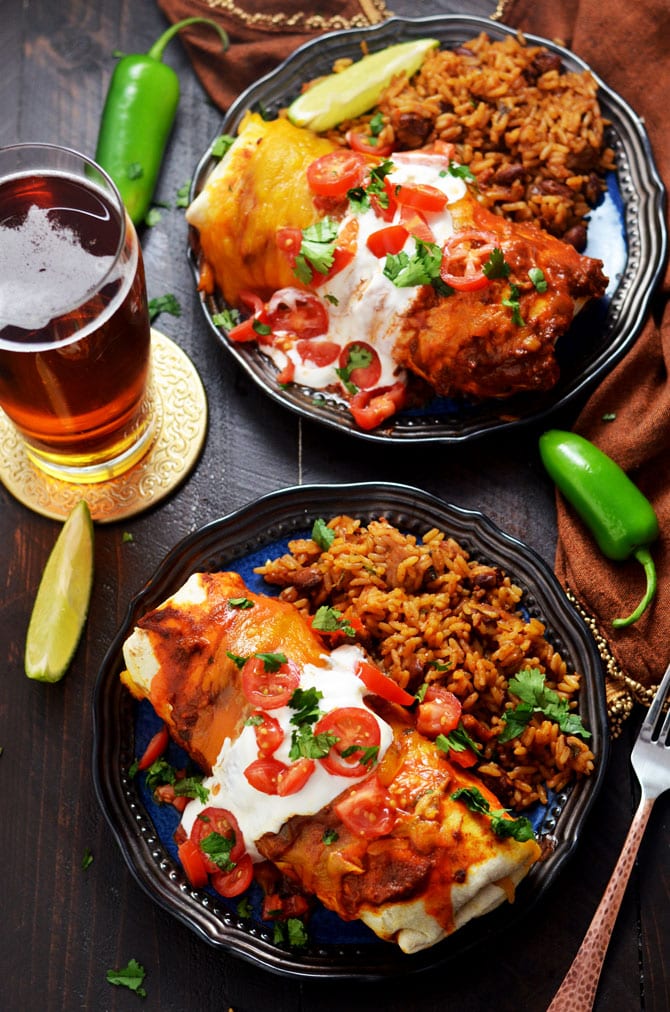 The only limes that I’ve been able to find throughout the past few weeks of recipe-making have been intimidatingly large. As in REALLY HUGE. As in close your eyes and picture a softball, but then imagine that it has a green rind surrounding it– that’s what these limes look like. They kind of freak me out (“but WHY are they so big?”), but they also have led me down a pretty delicious path.

I decided that, if I’m going to have gargantuan limes, I might as well go big or go home with everything, right? Like by making a huge batch of shredded beef and “everything’s bigger in Texas”-style chili gravy for Slow Cooker Smothered Beef Burritos. Thank you, Lerch limes. Thank you. 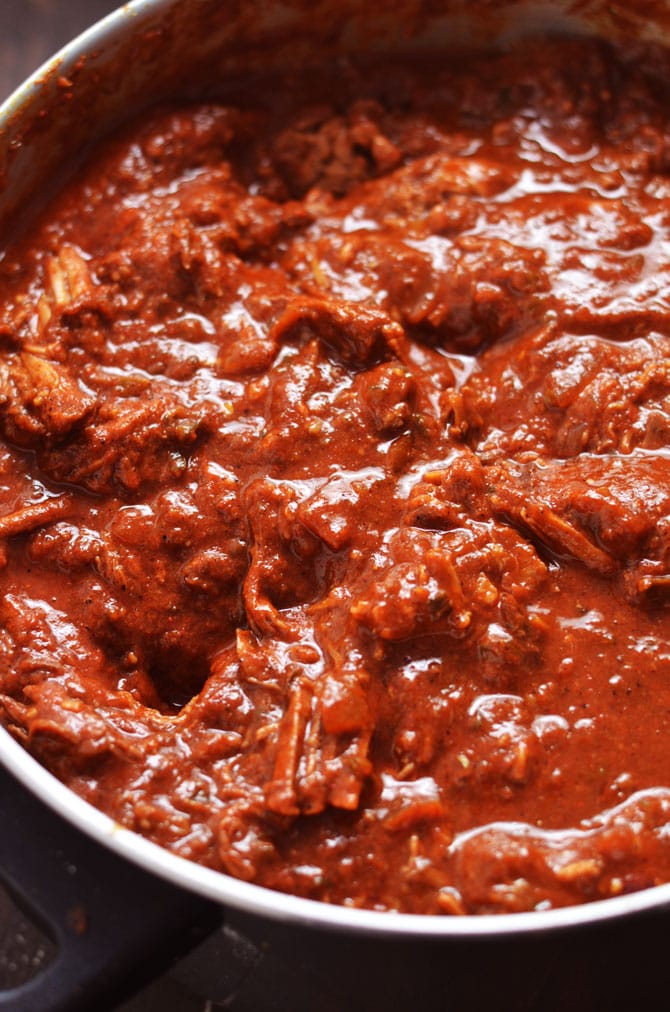 The key to making awesome smothered burritos is tender, shredded beef and a thick, flavorful sauce. It might not look too sexy (yeah, I know) but let me tell you, it is hard to resist eating all of the beef straight from the pot before it ever makes it to a tortilla.

Here’s what’s going on in that pot: First, I slow cook the beef in a tomato-chile mixture until it’s falling apart. Then, I make a roux of butter and flour to thicken the sauce. It’s not the Mexican way to do things, but that’s how they get down in Texas, and now I know why. After adding in the reserved liquids from the slow cooker and some more spices, it thickens into an insanely tasty sauce that clings to the meat and hits all of the markers– hearty, rich, acidic, and spicy. Then I reserve a bit of sauce for smothering and toss the beef back into the pot with the rest of it, and there you have it! Not a pretty picture, but a tasty filling, for sure. 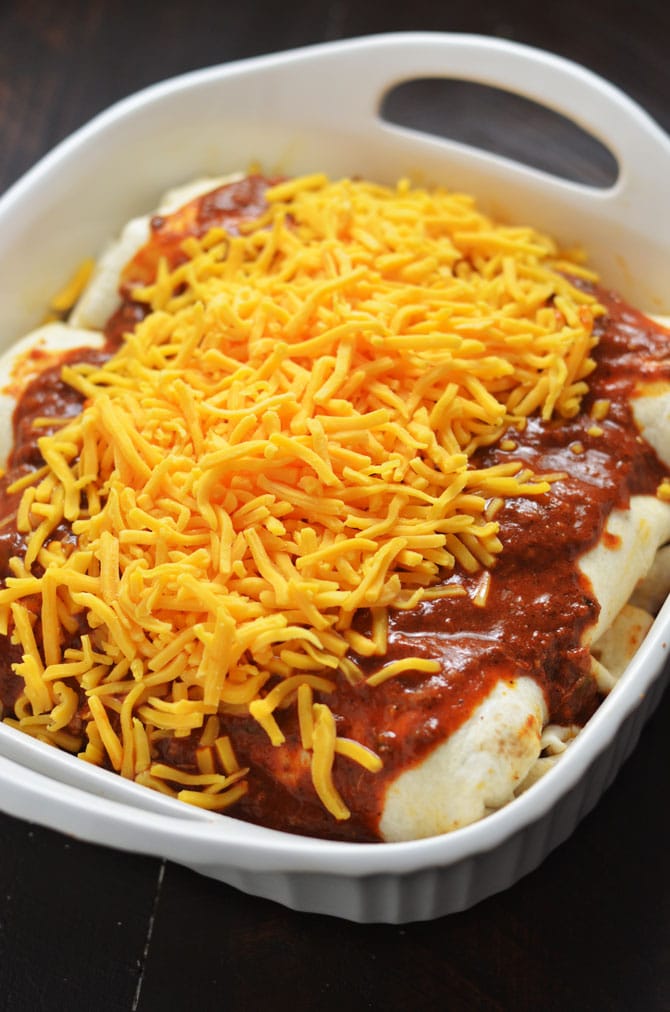 Now, it’s entirely fine if you want to just stuff the cheese inside of the tortillas with the rest of the filling, but I really love the enchilada-like quality the Slow Cooker Smothered Beef Burritos get when they’re baked with a ton of cheese on top. Who doesn’t love melted, bubbling, and slightly browned cheese? I sure do. 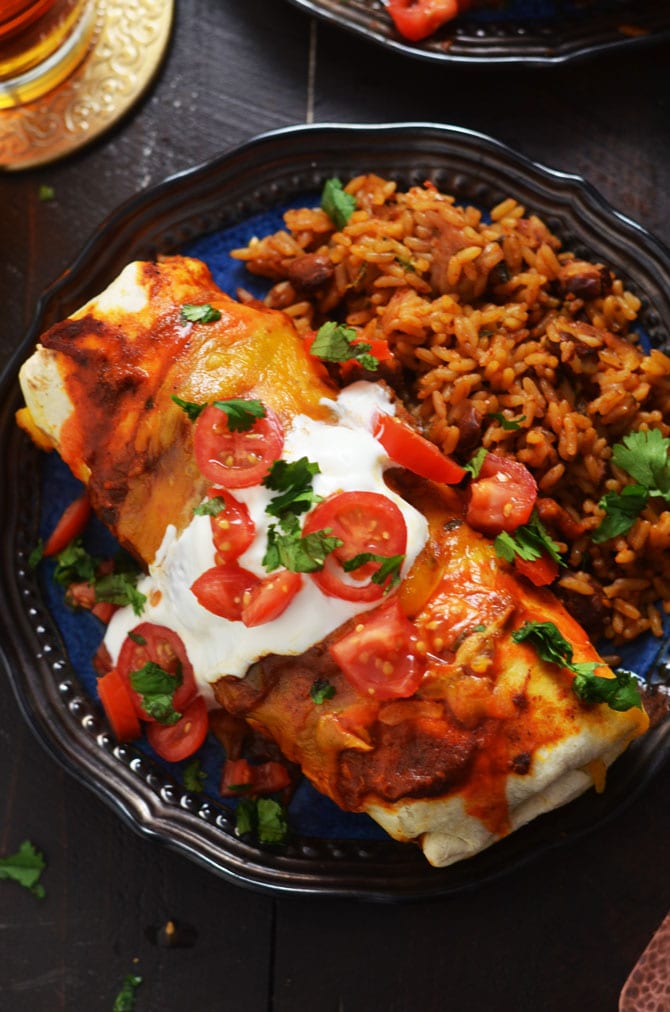 After baking, the sauce and cheese on top almost become one, which makes for a seriously mouthwatering burrito. But since we’re all about excess today (remember those freakishly large limes and the big batch of beef?), I decided to let a big dollop of sour cream melt over top of the finished burritos and to throw some chopped tomatoes and cilantro on top. Just try to tell me that doesn’t top anything you could get from Taco Bell, like, 5 BILLION times over. This is some real-deal tasty stuff right here. 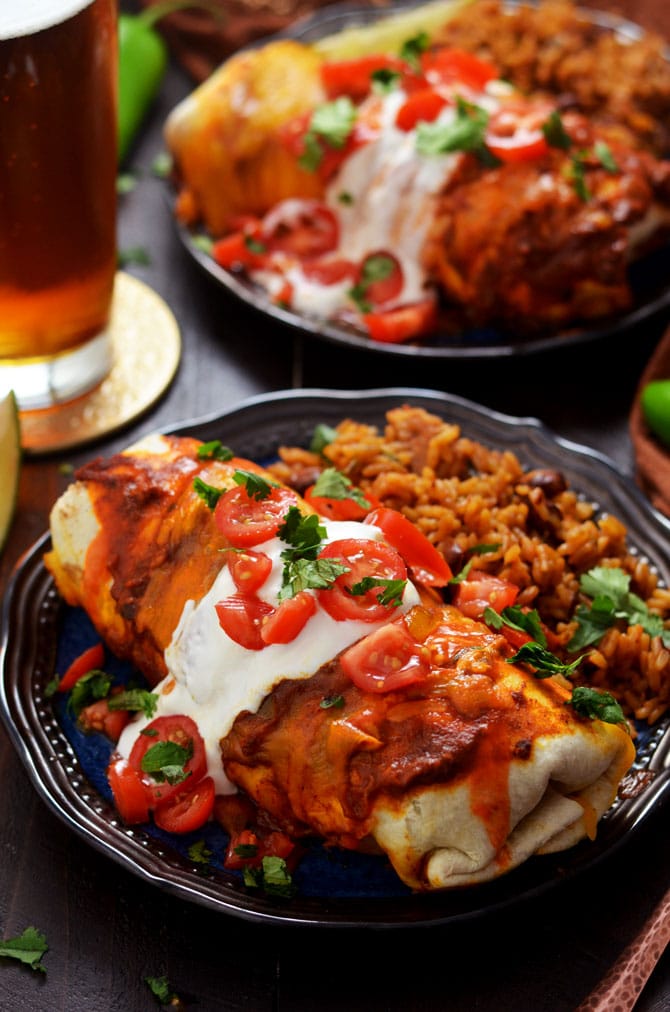 See the rice and beans on the side? If you’re thinking that you’d prefer to mix them right on in with your burrito filling, you can do that, too. The great thing about burritos is that you can customize them to your heart’s content. That’s why Chipotle does so well, after all. But who wants Chipotle when you can make something even more delcious (and a lot cheaper per burrito) right at home? Lets be real, there’s no contest there. You’ll agree after you sink your teeth into one. 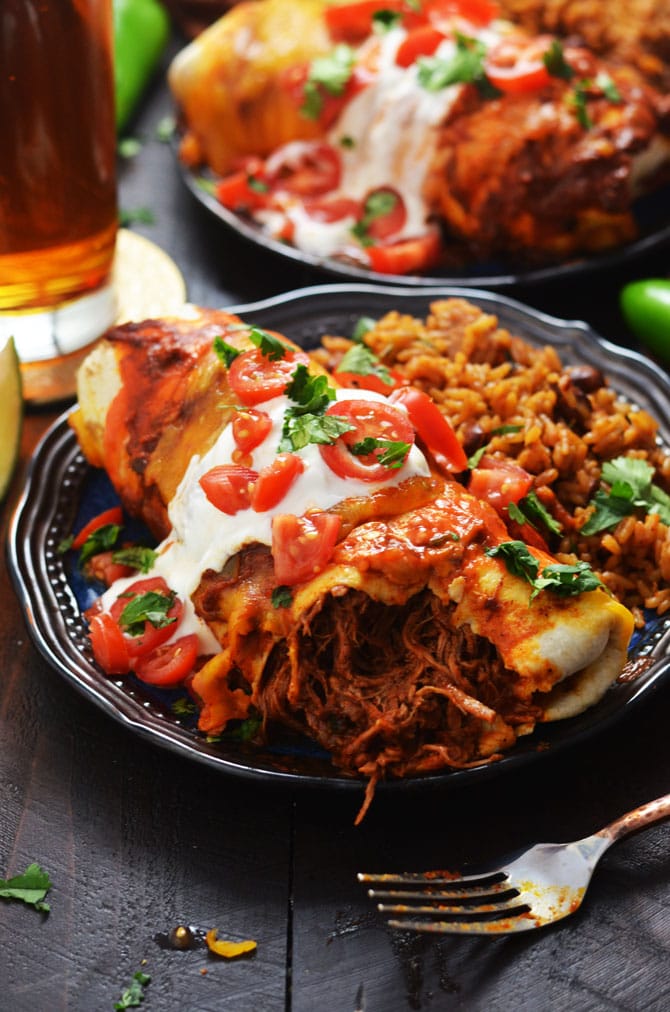 MMMMM, just look at that bite and all of that shredded beef peeking out, begging to be eaten.

Don’t worry, I took care of it.

Give these Slow Cooker Smothered Beef Burritos a go for Cinco de Mayo and don’t forget to tag #hostthetoast on Instagram or Twitter to show them off! Oh, and if you happen to be in an area where all of the limes are crazy huge, take a picture and tag those too.