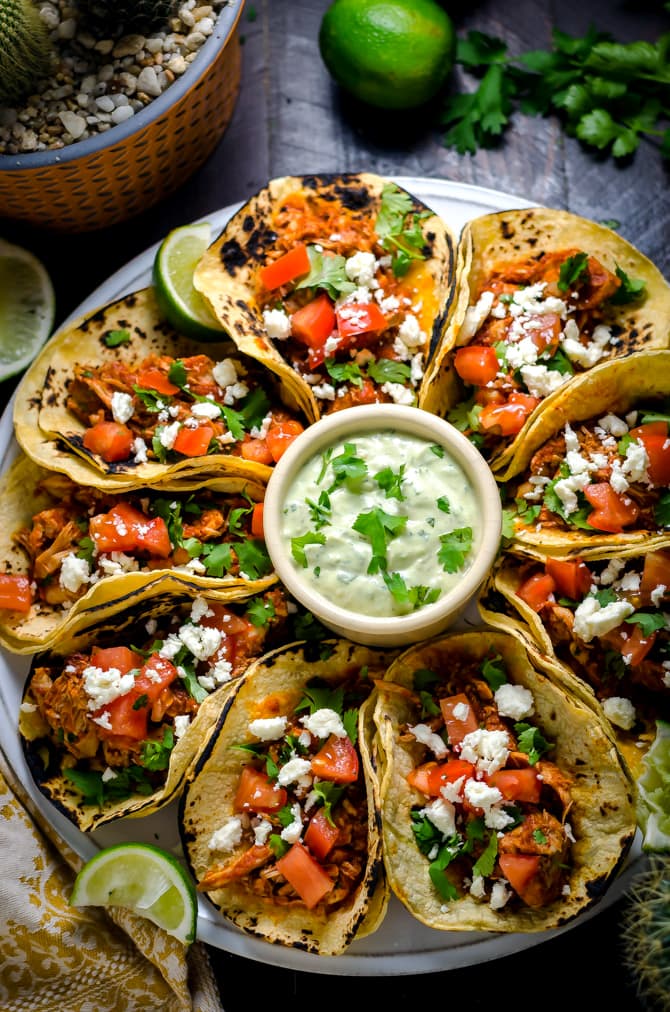 This month is like an experiment in how many lazy dinners I can make. And how many days in a row I can use my slow cooker before actually putting it back into the cabinet. And how many tacos I can stomach.

Especially that last one. I bought a jumbo-sized package of tortillas at the wholesale grocery store a few weeks ago and I’m starting to realize that it possibly might have been a little excessive. Like maybe in the realm of 200 tortillas too many. But you live, you learn, and you eat a few hundred tacos– we all have had far less delicious problems. 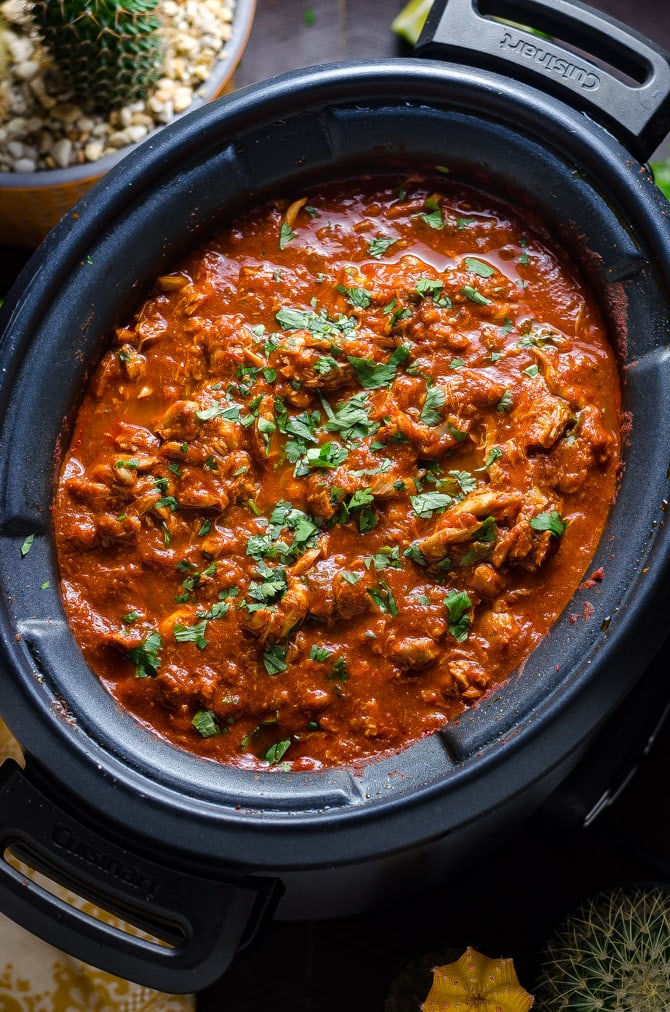 If you’ve been around here for a while, you might be thinking, “Morgan, this recipe reminds me of those Chicken Tinga Tacos you made a few years back,” and you’re right. They’re similar… SUPER similar.  As in “they’re both slow cooked shredded chicken smothered in a smoky tomato-chile sauce, which you can use for burritos, enchiladas, nachos, or tacos” similar.

The truth is that when I started making this Slow Cooker Spicy Shredded Mexican Chicken, I fully intended to make those tinga tacos (just for myself, just because I had all of those tortillas to use up). Or I guess I should say that I intended to make something sort of like them, but with the groceries I had on hand. I took a few liberties with the flavors, like increasing the amount of tomato, mixing in some honey, and simplifying the ingredients, but I figured that generally, they’d taste pretty much the same. 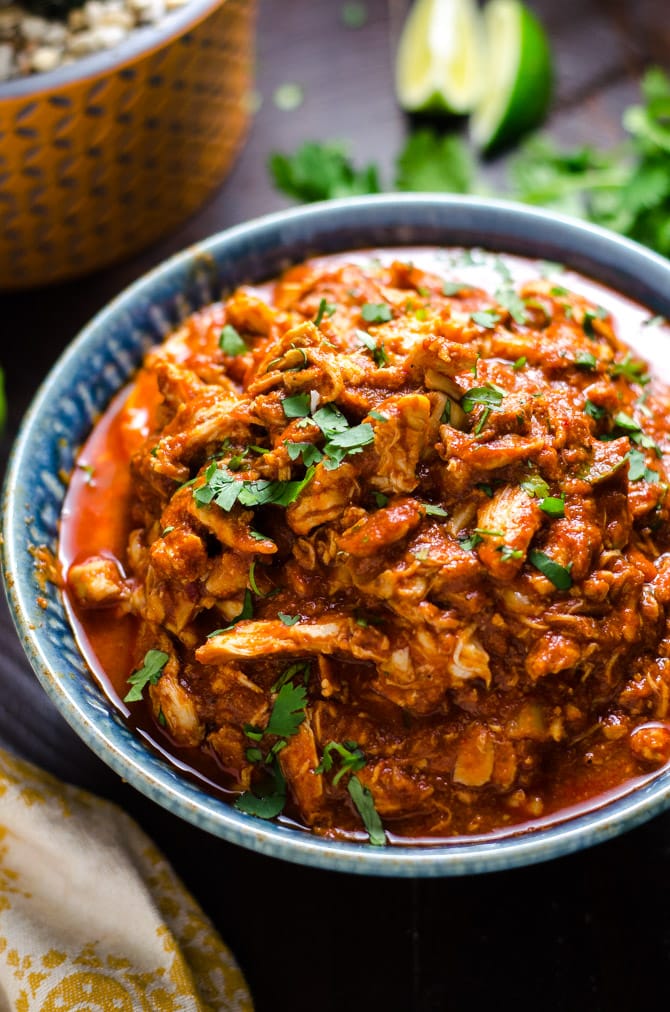 I figured wrong, of course.

They were undeniably similar, sure, but this recipe deserved its own spot on the blog. This filling felt hearty and substantial, while the tinga tacos were much lighter. This time, the liquids formed more of a sauce that could be spooned over the shredded chicken rather than a flavored broth. The tomato flavor was strong and not at all masked by the chipotles or any added stock like in the tacos from before, and it relied on honey and lime juice to add character rather than a longer list of spices like the last time.

Yup, it was definitely a new recipe– one that made me happy to once again be having tacos for dinner. I’m telling you, I’d eat tacos like these every day. 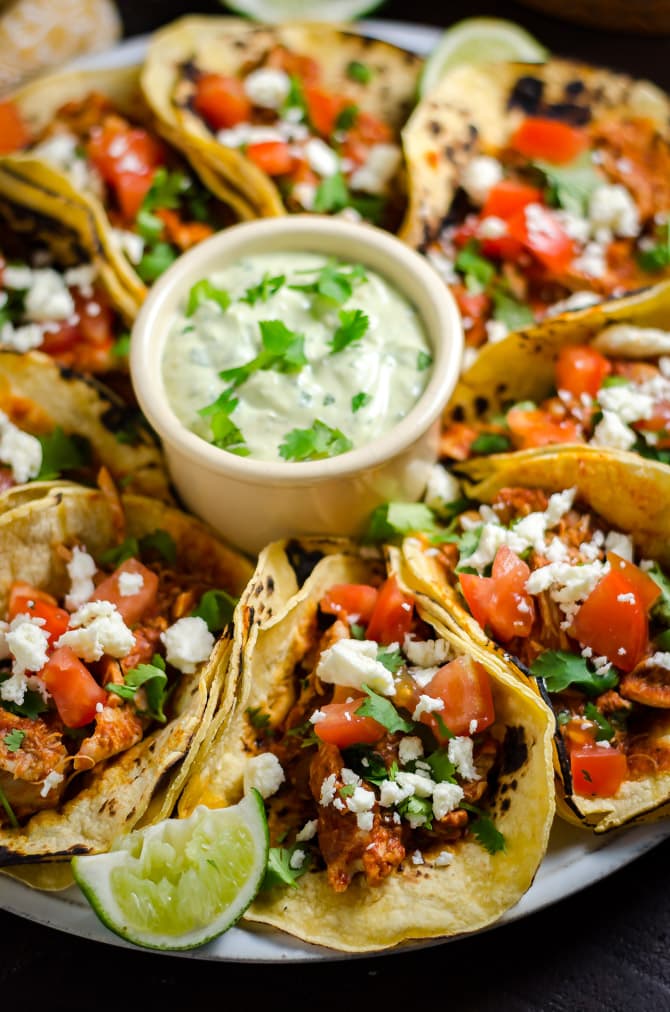 So was this Slow Cooker Spicy Shredded Mexican Chicken better than the last version? Honestly, it’s hard for me to say– they each have their own things going for them. If you want something a little more filling and saucy, go with this version. If you want something that plays more with spices but is still light, go with the tinga. Or better yet, just make both and be your own judge. Double the tacos sounds like a good plan to me.

Come by and grab some tortillas while you’re at it. I’ve got plenty to spare. 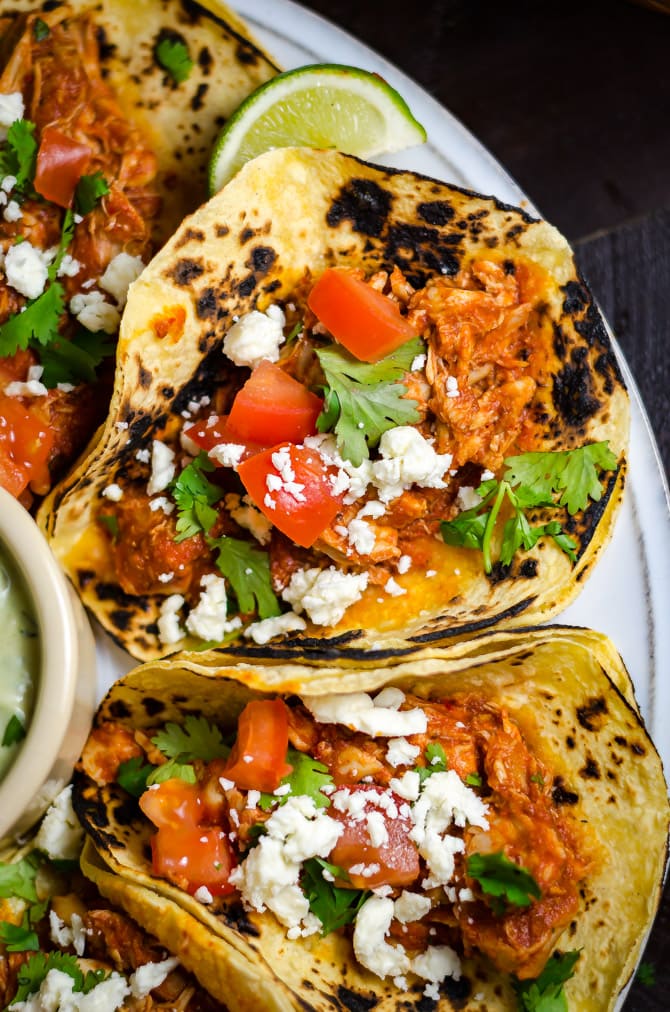