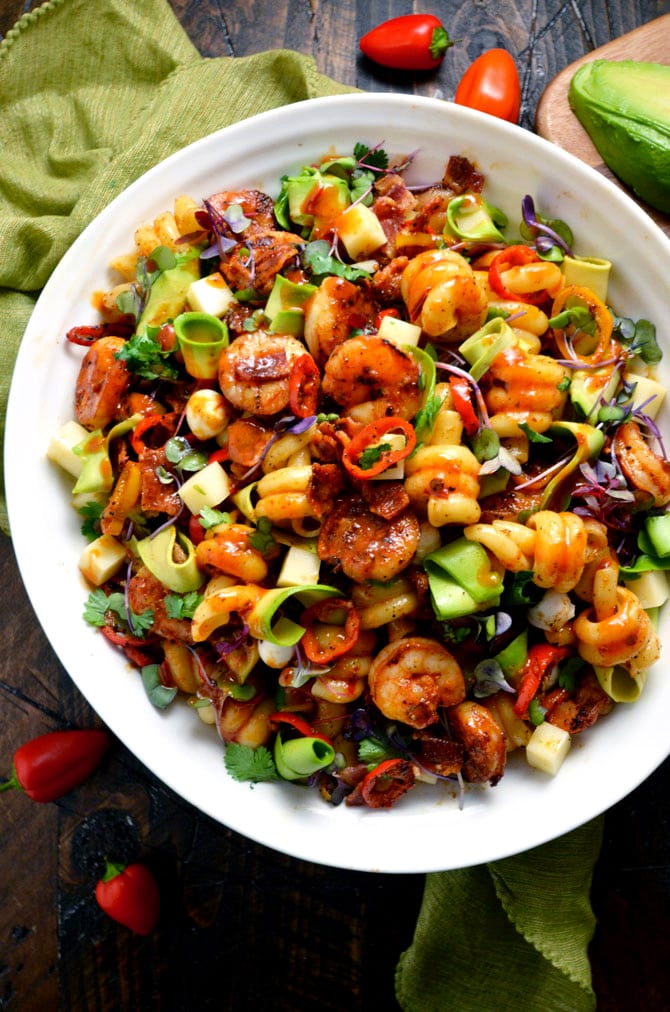 This Smoky Shrimp Pasta Salad with Chipotle Dressing is about to make a lot of people reaaaal popular this summer.

Growing up, it wasn’t unusual for my family to get invited to barbecues all across the state, from people we’d met maybe a handful of times. Word traveled fast, and my mom’s potato and macaroni salads were no joke. She became pretty famous for them.

But I was a child who freaked out at the sight of anything that even resembled mayonnaise, so yeah, I didn’t eat them. I stayed faaar away from the table of side dishes and strictly stuck to a diet of bunless hot dogs at every barbecue. You know, because I didn’t like bread either … I was a weird kid.

The point is that summer salads can make a gal reach barbecue VIP status, and I’m going to give you a recipe that will skyrocket you to the top tier of summer stardom.

Plus, this recipe is mayo-free, so it’s past-me approved! That’s good news for when time travel is invented. 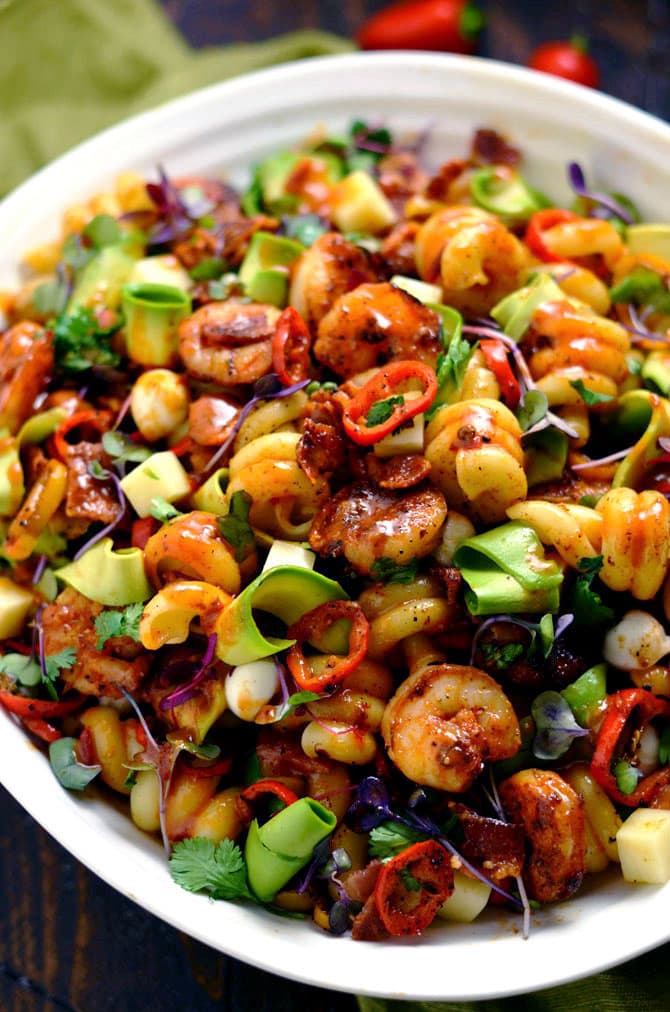 Rather than throwing together the typical Italian dressing soaked, pepperoni scattered pasta salad, I wanted to bring some dynamic flavors to this recipe that would hold up to the smoky, sweet, acidic, and and slightly spicy feel of the best barbecue dishes. To start, that meant ditching the salami, which I swapped out for shrimp. The shrimp gave a tender, snappy texture to the mix, and I hit it with the blackening spice mixture that I use in one of my most popular recipes ever, Blackened Fish Tacos with Avocado-Cilantro Sauce.

That spice mix, wooo baby. Seafood almost feels wrong to me now without that punch of smoked paprika.

The smoky shrimp by itself is awesome, but I decided to throw back in some of the cured pork flavor with a little bacon. Okay, a lot of bacon. Go ahead and pretend you’re angry about it.

Oh, and because that all wasn’t enough smokiness and spiciness on its own, I decided that bottled dressing was a no-go and I made a vinaigrette out of canned chipotles in adobo, honey, and apple cider vinegar. I use chipotles in adobo in my cooking a lot (and I do mean a lot) because they incorporate so many flavors and are so versatile. In case you’ve never picked up a can, they’re smoked and dried jalapeños that are then rehydrated and canned in a tangy, garlicky, BBQ-like sauce. Chipotles in adobo are spicy but not overwhelmingly so, and all of those flavors seeping together for so long makes a very complex base for marinades, sauces, or in this case, seriously awesome salad dressing. 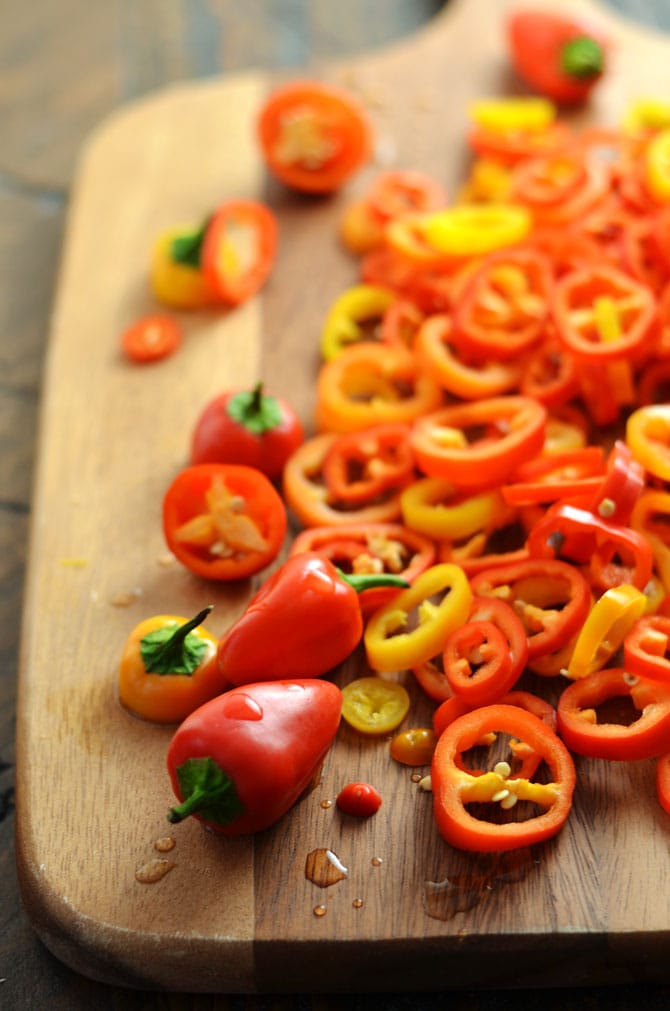 To balance the spiciness and smokiness of the meats and dressing, I decided to add in some creamy and sweet ingredients like sauteed sweet mini bell pepper rings and avocado ribbons. As a bonus, the ribbons and rings find themselves circled around the shrimp and pasta so you’re really getting a lot in one forkful, which is exactly how I like my pasta salads.

And while some silly people think that you shouldn’t put cheese and shrimp together, I’m showing them just how wrong they are with not one, but two types of cheese: Monterrey Jack and mozzarella pearls. I pour my hot pasta right over them so that some of the cheese melts onto the pasta and it is just glorious. Take that, naysayers! Take a big ol’ bite of that. 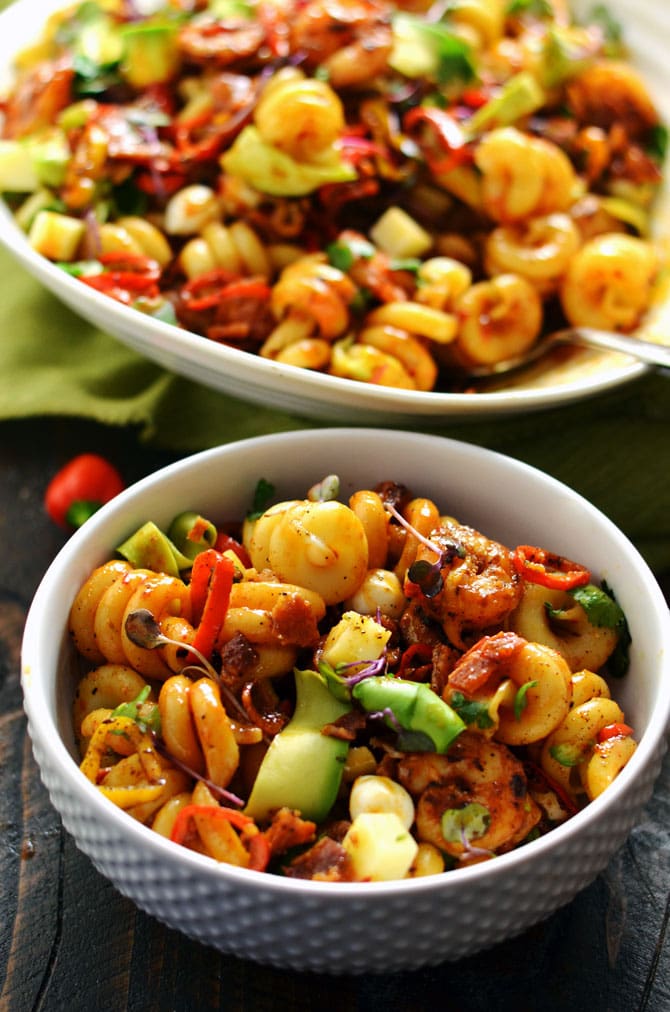 I briefly mentioned avocado ribbons before but they need a bit more attention because they are my new favorite thing.

Never heard of them? All you do is take a vegetable peeler to an avocado and you’ve got great strips of avocado to roll up into ribbons of creamy dreaminess. They look beautiful (especially with the swirly pasta and spirally shrimp in this recipe) but the real bonus is that the avocado flavor and texture is present without being in huge, awkward chunks or mashed up like guacamole. I think after you try this Smoky Shrimp Pasta Salad with Chipotle-Honey Vinaigrette, you’re going to want to put avocado ribbons EVERYWHERE.

Now I really want time travel to be invented so I can go back a couple of decades and live my whole life with avocado ribbons in it. With this whole pasta salad in it, really. Try it and you’ll be right there with me. 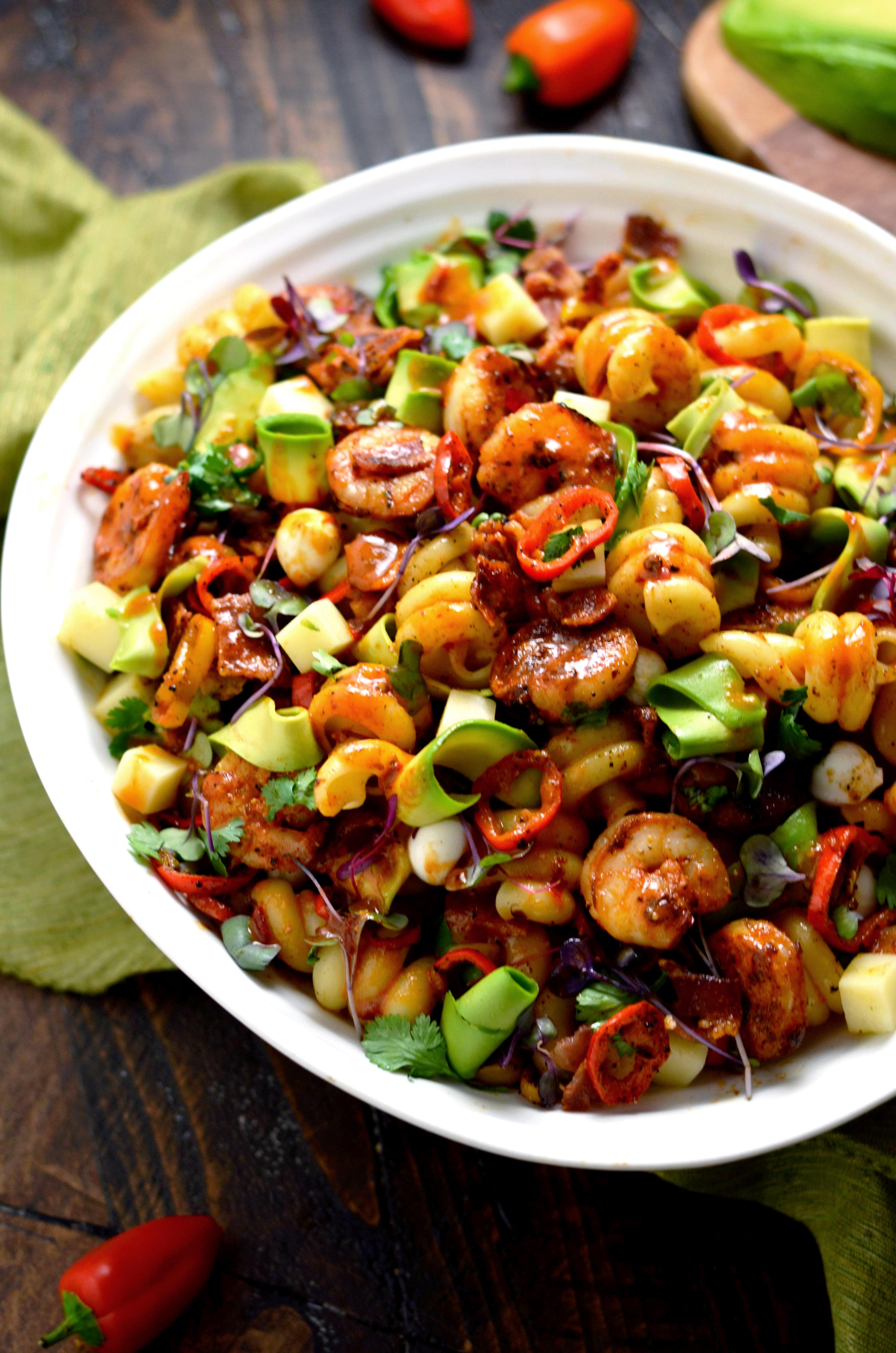 Go on, make this Smoky Shrimp Pasta Salad with Chipotle-Honey Vinaigrette, take a photo and tag #hostthetoast on Instagram or Twitter, and rake in those BBQ invitations!

For the Chipotle-Honey Vinaigrette:

For the Smoky Shrimp Pasta Salad: