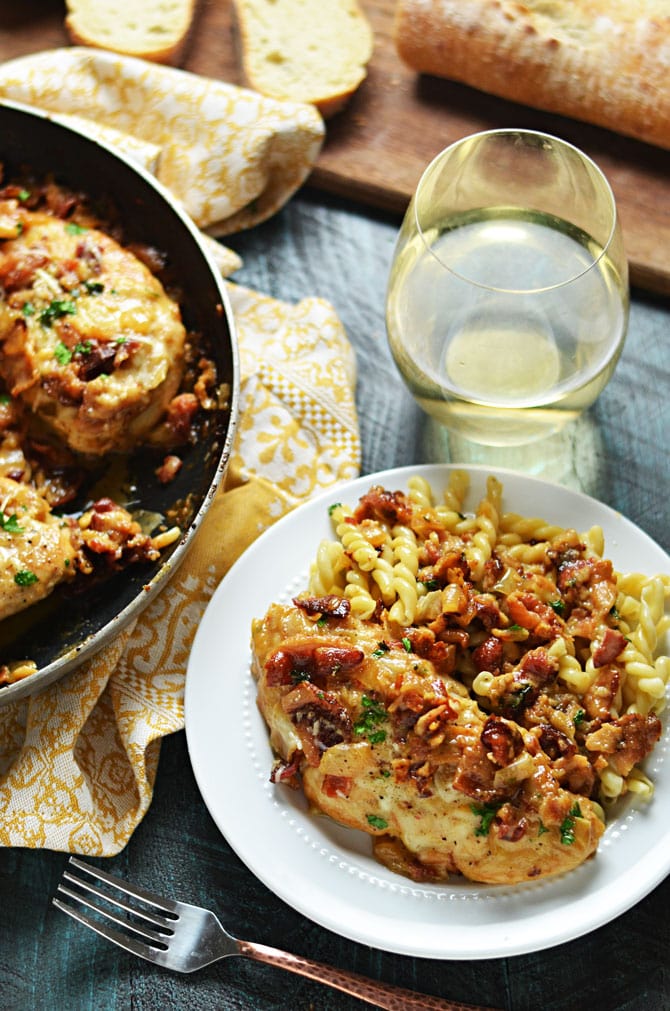 I like plenty of “classy” foods– dishes with mile-long lists of ingredients (or mile-high costs for just a few special ones). But when it comes down to what I crave most often, the list consists of a few, simple foods: bacon, chicken, and cheese. You know, the oh-so-very refined palate that one would expect of a food blogger.

So what do I do when I’m torn between making an impressive dinner recipe and satisfying all of my not-so-sophisticated cravings? I channel my inner cheap knock-off version of Julia Child* and stir some wine into the mix. I’m telling you, wine ups the fancy factor by like 10 levels every time. Take this Smothered Bacon Asiago Wine Chicken, for example.

* Disclaimer: Please note the “cheap knock-off version” portion of that statement. You see Child and I both share a strong fondness for wine, cream, cheese… and more wine. She once joked, “I enjoy cooking with wine, sometimes I even put it in the food.” For this reason, and this reason alone, I feel we have a deep and oft misunderstood spiritual connection. I am fully aware of all of the levels of magnitude less cool that I am than Julia Child. 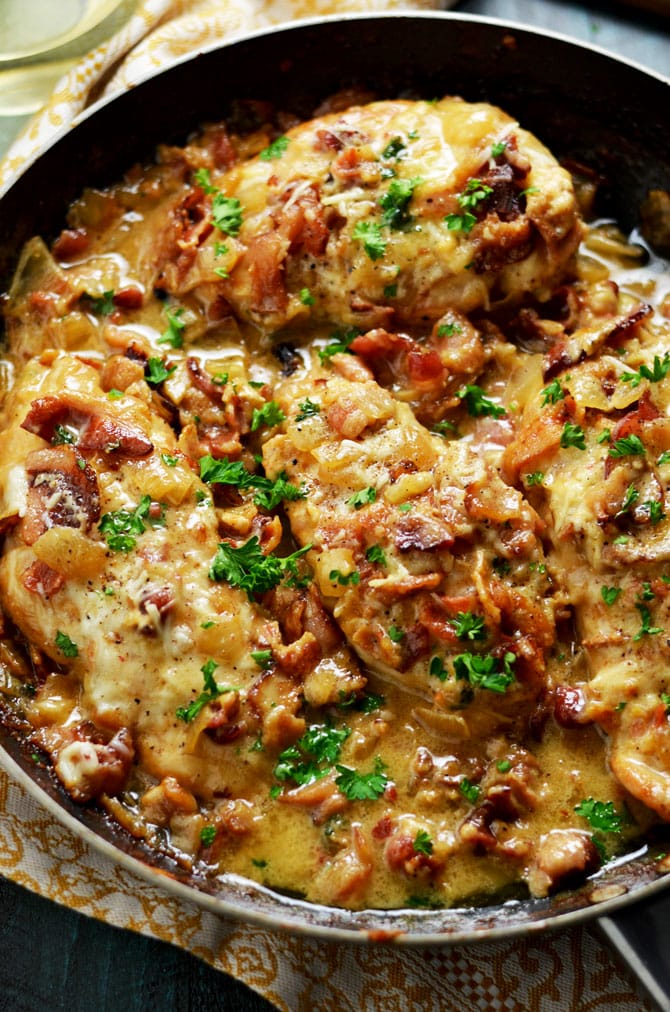 This recipe is exactly what you’d think it was upon reading the name– juicy chicken breasts that are blanketed in a creamy, wine-spiked sauce, flavored with asiago cheese and studded with crumbled bacon. The chicken is phenomenal, but the sauce is what really steals your heart. I like to dip crusty bread in it on the side, or serve it over pasta. ‘ 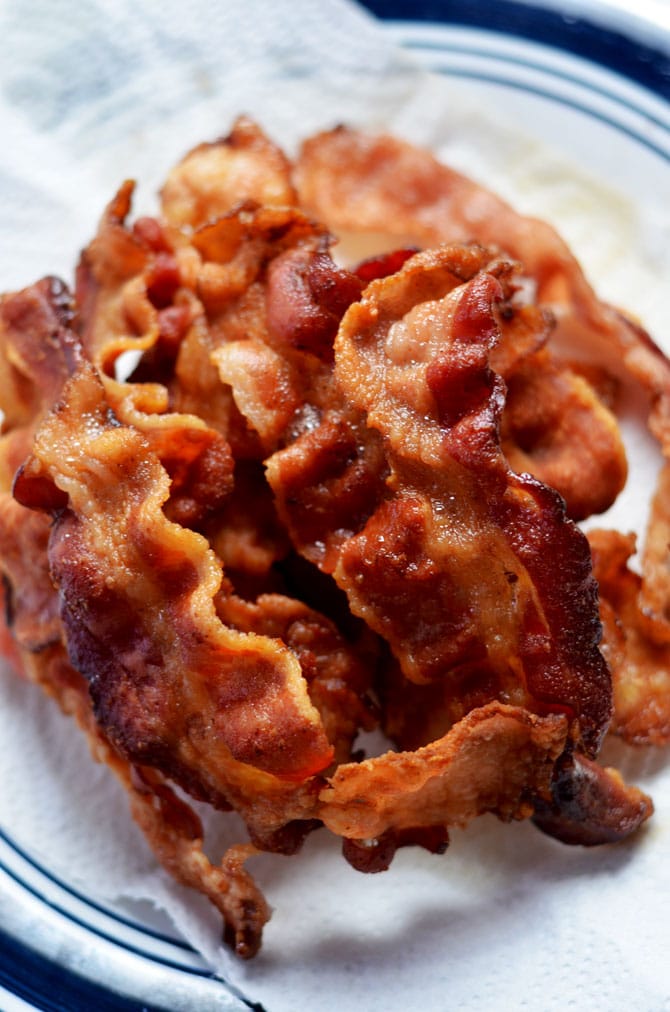 One thing I really love about this recipe is that the bacon flavor is not confined to just the (many) crumbles of bacon that are mixed in. Instead, the chicken is cooked in some of the rendered bacon fat, which allows it to take on a lot of that savory, salty, meaty flavor. Then, when the sauce is made, the wine deglazes the pan, picking up the little browned bits of bacony goodness that were left behind.

I always have to make a few extra pieces of bacon because if James smells bacon cooking, he will bug me nonstop until I let him eat a strip. Then I feel like I’m giving myself the short end of the stick if I don’t also get to eat one myself– like, why should I miss out on something so magical in the name of self-restraint? So, the golden rule is to make at least 2 extra strips to save myself from any potential grief. You can never have too much bacon, right? 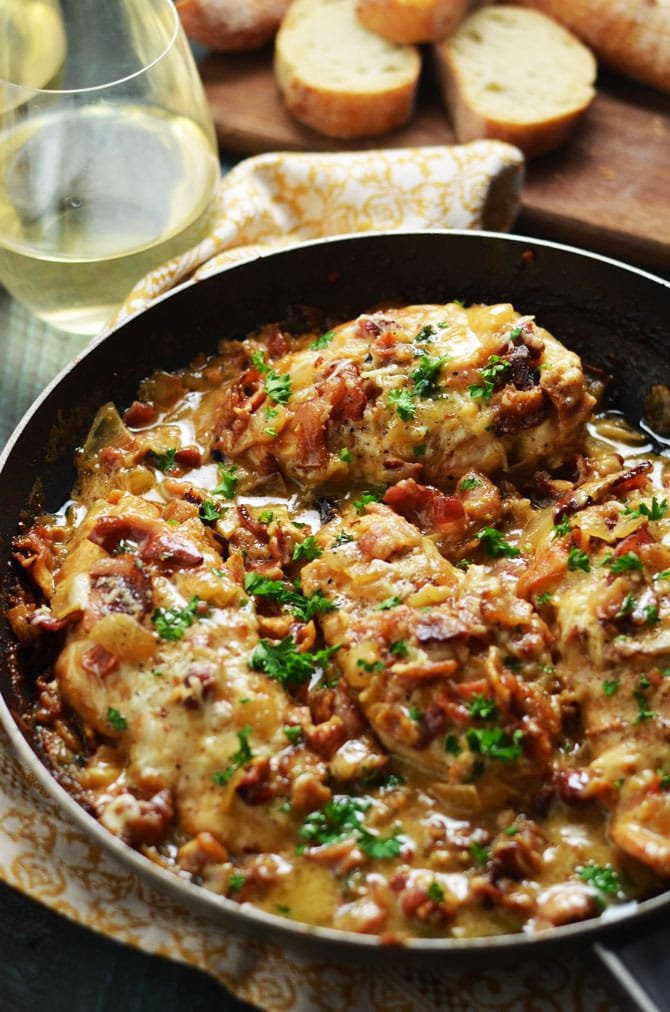 This Smothered Bacon Asiago Wine Chicken is really is a special treat of a recipe, but it takes less than an hour to whip together. I think of it as a date night dish on easy mode–I know I’d be wooed if someone made it for me! I have hearts in my eyes just looking at the pictures. Like I said before, who doesn’t love some fancified bacon, chicken, and cheese?

Give it a go and report back with your mouthwatering results! While you’re at it, don’t forget to take a picture of your Smothered Bacon Asiago Wine Chicken and tag it with #hostthetoast on Instagram or Twitter. I can’t wait to see it. 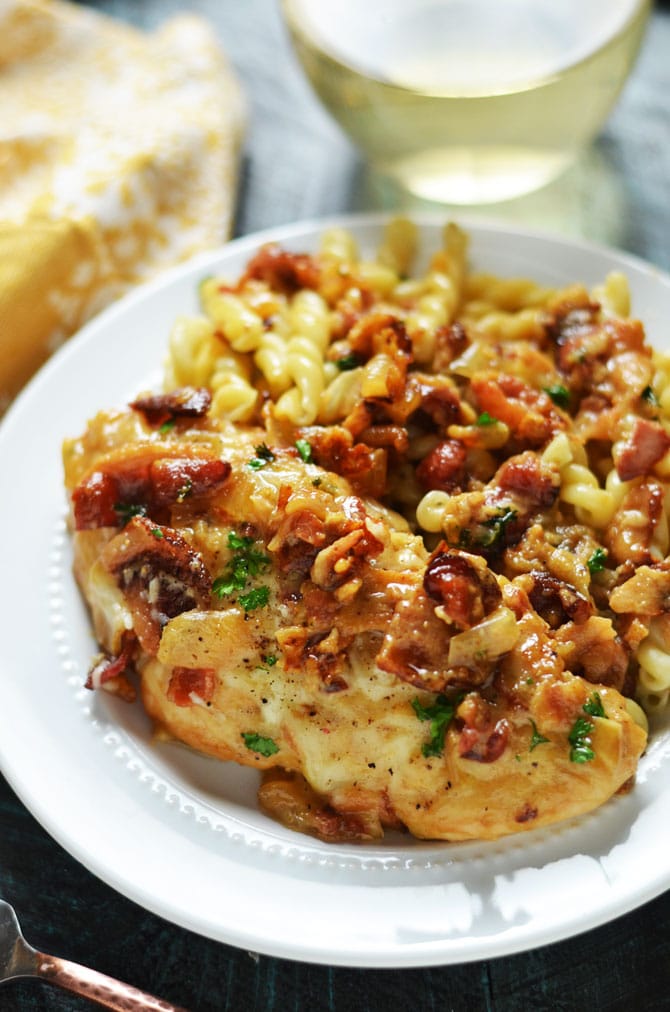