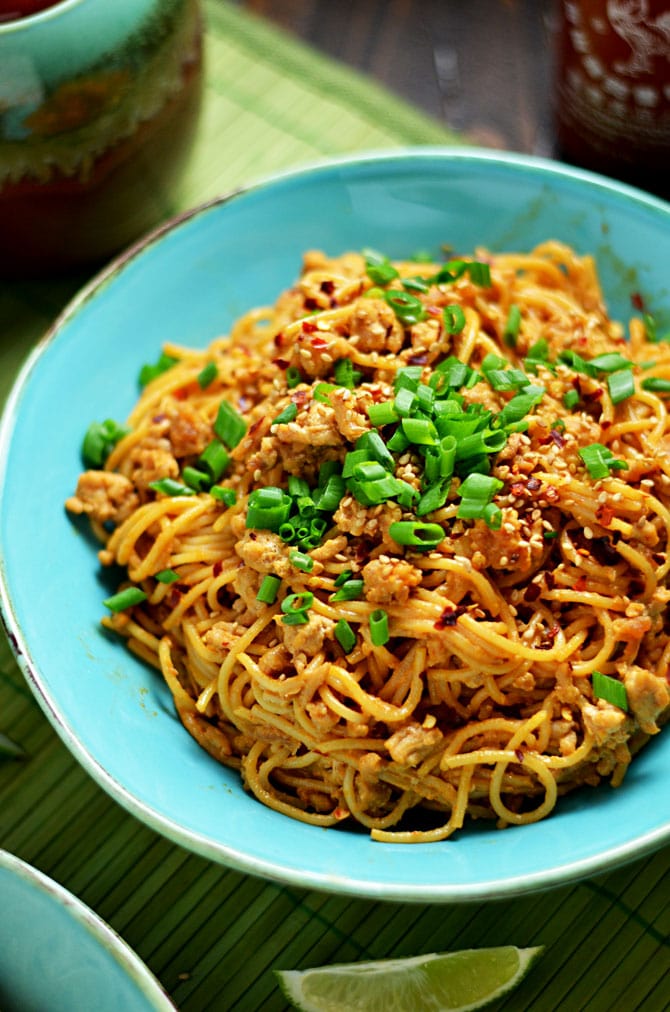 When people find out that I’m a food blogger, they seem to be under the impression that my cabinets are overflowing with the most sophisticated of ingredients, and that I casually toss together grand culinary masterpieces day in and day out. Well, I wish.

Just like everyone else, I dread spending too much time in the supermarket. I, too, run out of “the good stuff” and wind up trying to figure out what to make out of a can of this and a box of that and whatever got left in the back of the freezer. I throw things into pots and pray for the best like the best of them. And that– not some pre-meditated grocery store splurge– is how I came up with these Spicy Sesame-Chili Noodles with Chicken.

(But of course if you’d tasted it, you’d never have guessed.) 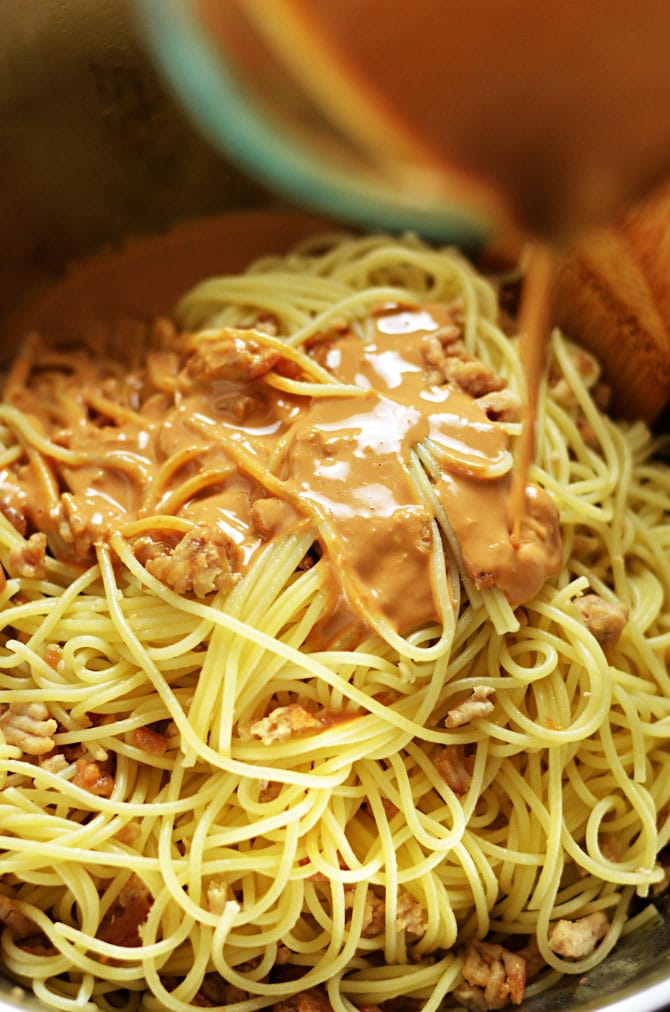 I’ve mentioned this before, but I’m absolutely obsessed with Michael Solomonov’s Perfect Hummus— to the point that I am still making several batches a month. In fact, I just pick up extra tahini (the sesame seed paste that is the core of hummus) every time I go to the grocery store now, because I know it will all get used up eventually and I can’t risk not getting my homemade hummus fix. Even when I’m nearly out of ingredients, there’s always tahini tucked away somewhere, wondering if I’m going to bust out the food processor and chickpeas that day.

…Which got me thinking, why did I only use tahini when I was making hummus, or other Middle Eastern dishes? It’s creamy and nutty like peanut butter, but not sickly sweet. It would make the perfect sauce when combined with the sriracha and soy sauce I still had in the fridge, a bit of brown sugar, and some vinegar for acidity, almost like an Asian peanut sauce, but sesame-style! 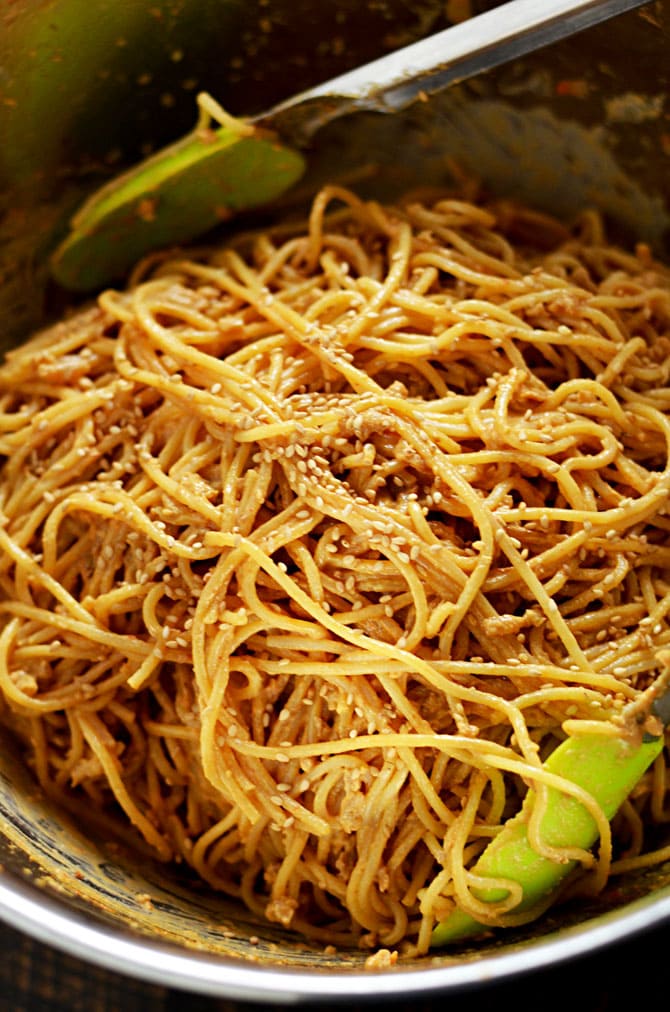 And since I was on a roll with crossing cultures, I decided not to fuss about the fact that I had no Asian noodles on hand. I had spaghettini that I always forget about way in the back of the drawer, so I used it in lieu of the springier Chinese market alternatives. After they were coated in the sauce, the textural difference didn’t bug me in the least. However, if you’ve got Asian egg noodles, then go all out, my friend. 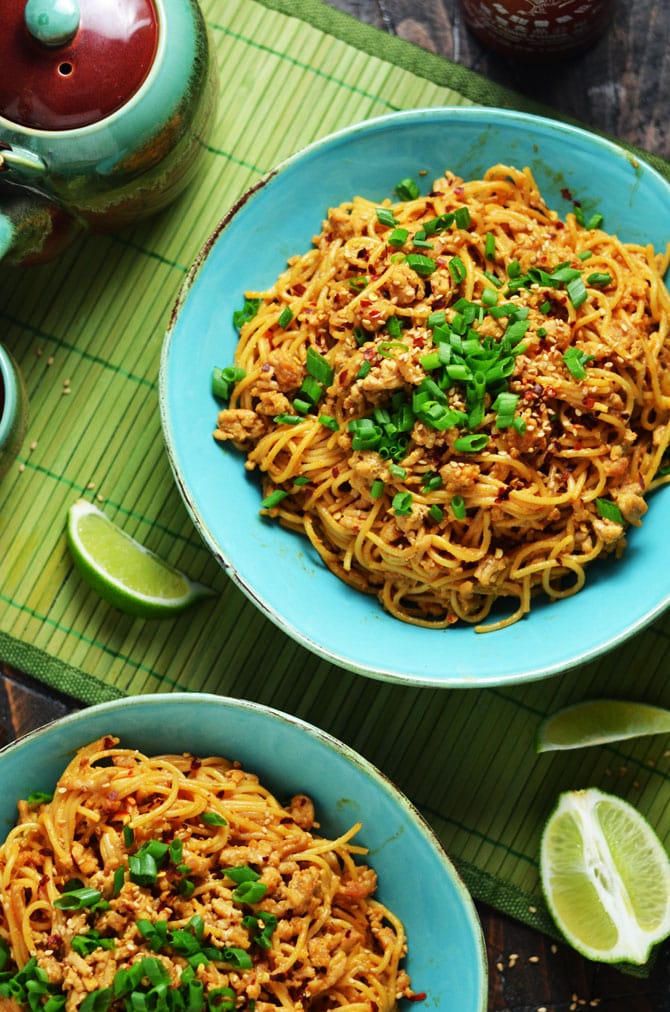 I wanted the sesame flavor to shine through in this recipe to balance the very strong flavors of soy and sriracha sauces, so aside from making tahini the base, I also cooked my ground chicken in sesame oil, and I added toasted sesame seeds to the mixture. Don’t worry though, the sesame never got overwhelming. It was perfect.

When cooking the chicken, I made sure to break it up into very, very small pieces so that the sauce would help them cling to the noodles so you get a bit of both in every bite. I loved that I didn’t have to switch back and forth between forkfuls like I would’ve had to if I kept it in bigger chunks. 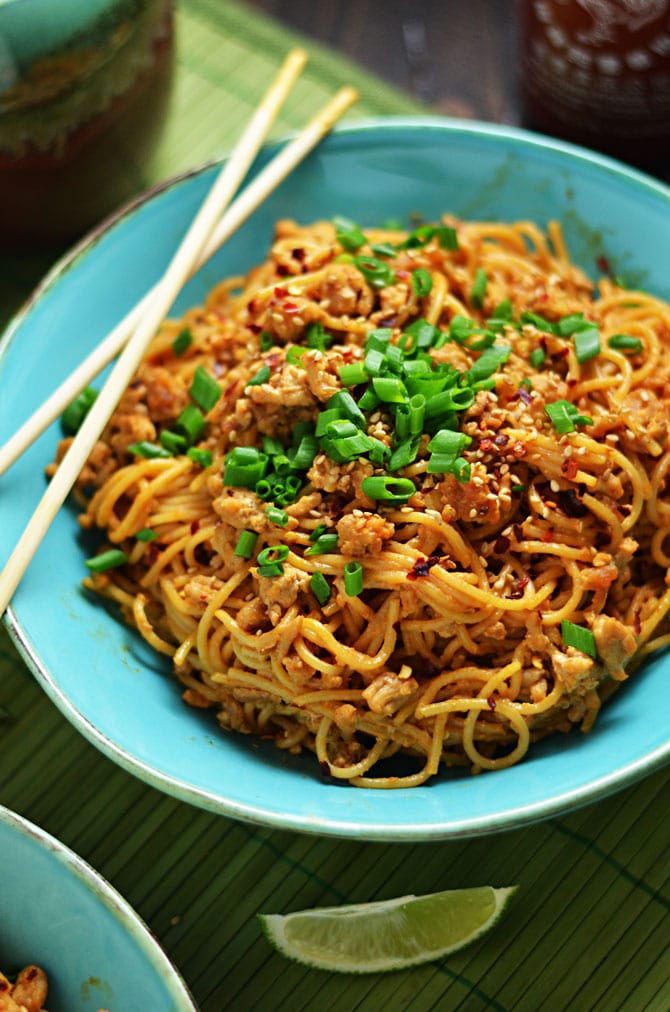 And honestly, I just couldn’t believe that I wound up with such a tasty dish after trying to toss together whatever odds and ends I happened to have laying around. I’ll tell you, though this might be the first time I ever thought to use tahini in my spicy pasta recipes, it sure won’t be the last. Whip some Spicy Sesame-Chili Noodles with Chicken together and see for yourself– and don’t forget to take a picture and tag #hostthetoast on Instagram or Twitter while you’re at it.