Sweet Mustard Pork and Potato Packets. They say good things come in small packages. These tangy, sweet, and smoky pork chop foil packets prove it– and they’re extremely easy to make, to boot. This post is brought to you by French’s. All opinions expressed are my own. 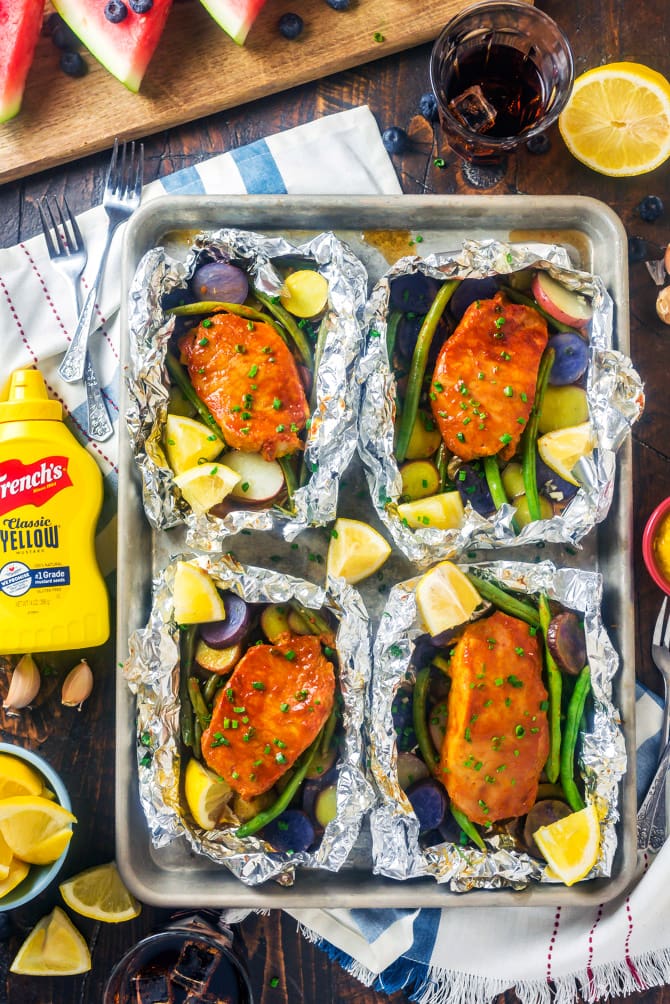 It’s summertime, and the living is easy, because I’m making use of every single shortcut recipe in the books. No meals with 25 ingredients and just as many pots and pans. We’re talking a whole three months of one pot pastas, sheet pan bakes, and my favorites: foil packet dinners. 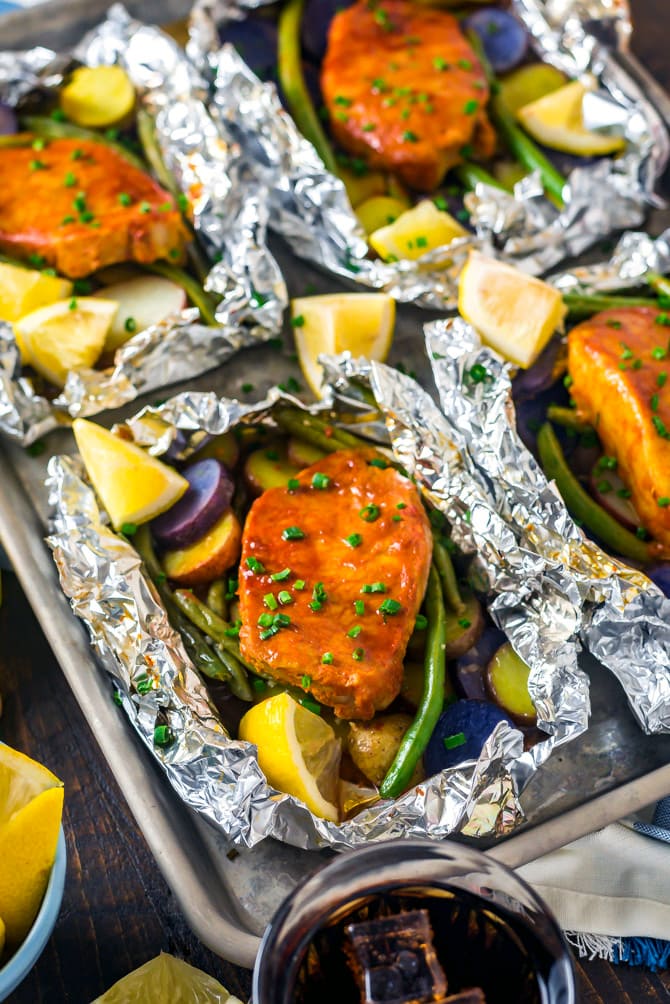 Toss ‘em in the oven, throw ‘em on the grill, or get real outdoorsy and cook them over a campfire. You’ll have individual portions of high-flavor, low-effort dinners for everyone. And best of all, by keeping it simple, you’ll have more time to focus on the 3 S’s of summer: sunshine, sea water, and socializing. Actually, can we throw a little sangria in there as well? And sunscreen. Being that I am, perhaps, the palest person to ever venture outdoors, I need to slather that stuff on like it’s a second skin.

Back to that campfire thing for a second, though. This year, a few of us got permits to drive directly onto a nearby beach, which means we can fish and have small bonfires all throughout the day and night. We went out for the first time a couple of weekends ago, and I learned a very important lesson: You will somehow wind up with sand on your burgers when cooking them over a beach fire, no matter how careful you are.

And on your hot dogs.

And your corn on the cob. 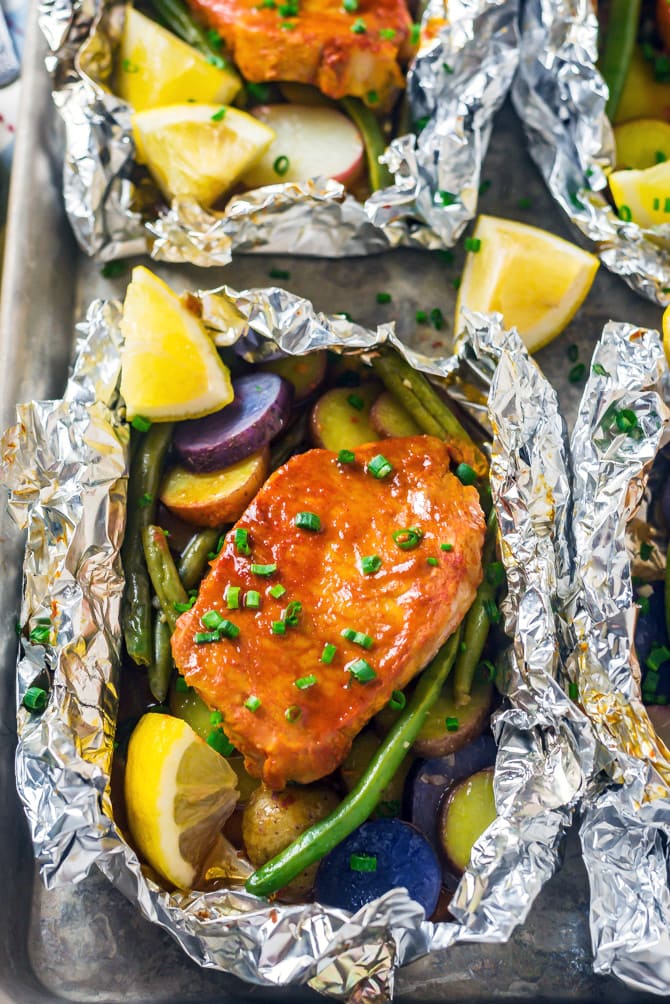 So the next weekend, I decided to switch things up. Before leaving for the beach, I sliced up potatoes and tossed them in a bowl with green beans, a light drizzle of oil, minced garlic, and salt and pepper. Then I seasoned a few thick pork chops with smoked paprika, salt, and pepper, brushed them with French’s Classic Yellow Mustard, and pressed dark brown sugar on top. I divided everything into little packages, tucked them into our cooler, and hoped for the best as we headed down the shore.

Just as I’d hoped, cooking everything in foil prevented any sand from spoiling our dinner. And man, was it some good fireside eating. The brown sugar melts as the pork cooks, giving it a sweet, glaze-like exterior, with sharp tanginess from the French’s mustard and smokiness from the paprika all combining together. That flavor runs off in the juices from the pork that help to flavor the beans and the potatoes as well, all in one seriously satisfying packet. Well, eight packets, technically. One for each of us. 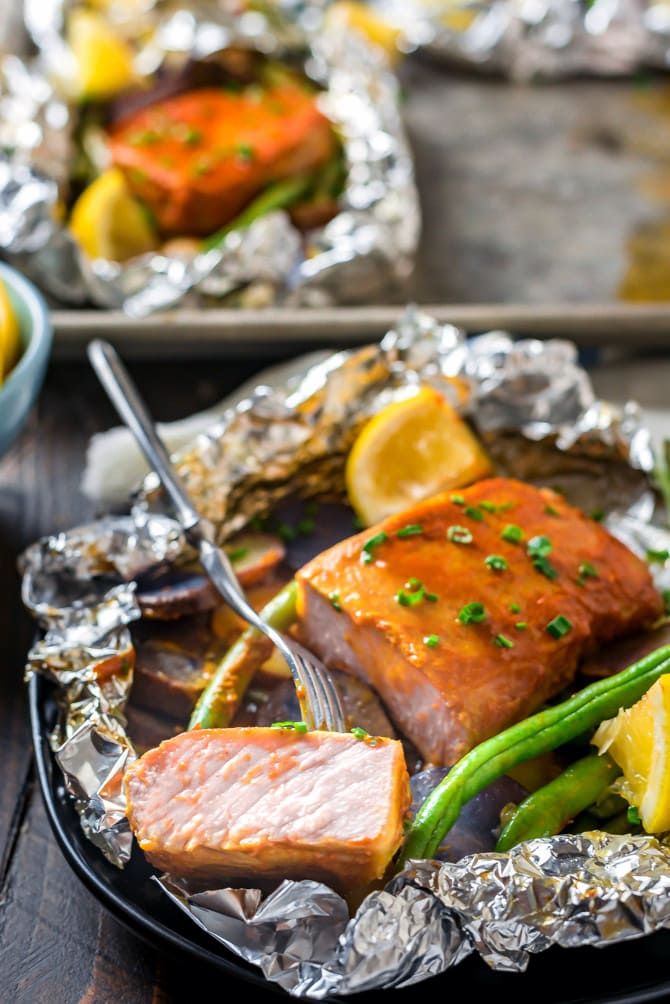 And that’s how I became in charge of the food for all of our future beach trips. Good thing the Sweet Mustard Pork and Potato Packets are quick and easy to make, right? I’m going to have them on repeat all summer long.

In fact, I’ve already made them since that day on the beach. I had to take photos to share the recipe with you guys, obviously! I’m also planning to make them again when we grill this weekend for our early Fourth of July celebration. My Omi is coming to visit and it uses most of her favorite ingredients (pork, mustard, and potatoes), so I can’t wait to share it with her and the rest of the family. And I’ll get in some of those 3 (or 4, or 5) summer S’s I mentioned earlier, while I’m at it. 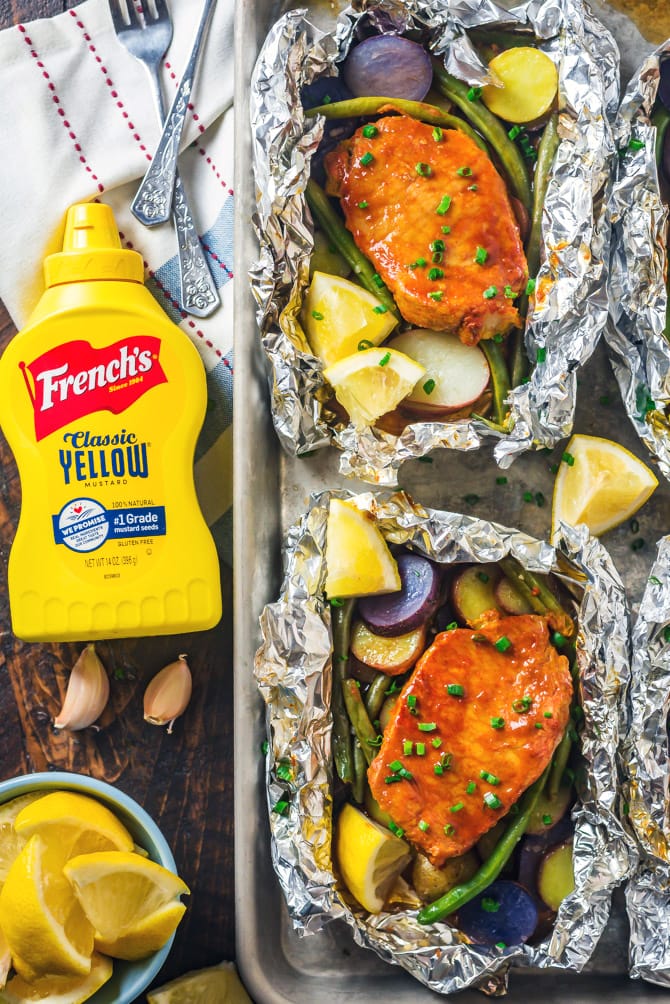