The Best Cornbread Stuffing with Sausage and Bacon. This cornbread stuffing (AKA cornbread dressing) pulls out all the stops. Sweet cornbread, salty bacon AND sausage, tons of herbs and aromatics, and crunchy toasted pecans make this stuffing the most popular side dish on your Thanksgiving table. 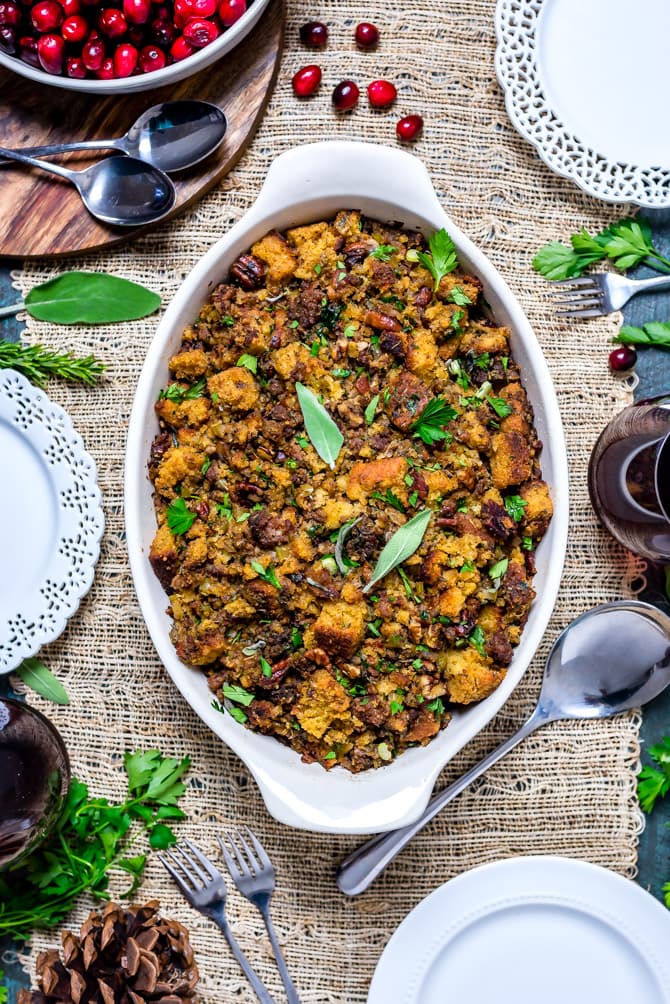 It’s about time that we all start ironing out our Thanksgiving menus, which means it’s time to make the big decisions: how we’re going to roast our turkeys, what sides we’re going to make, whether to smash or whip the potatoes, and of course, what kind of stuffing we’re serving up for the big dinner. And if you’re going to really impress your Thanksgiving guests, the very first resolution to make is that that stuffing will not come from a box or a bag this year. 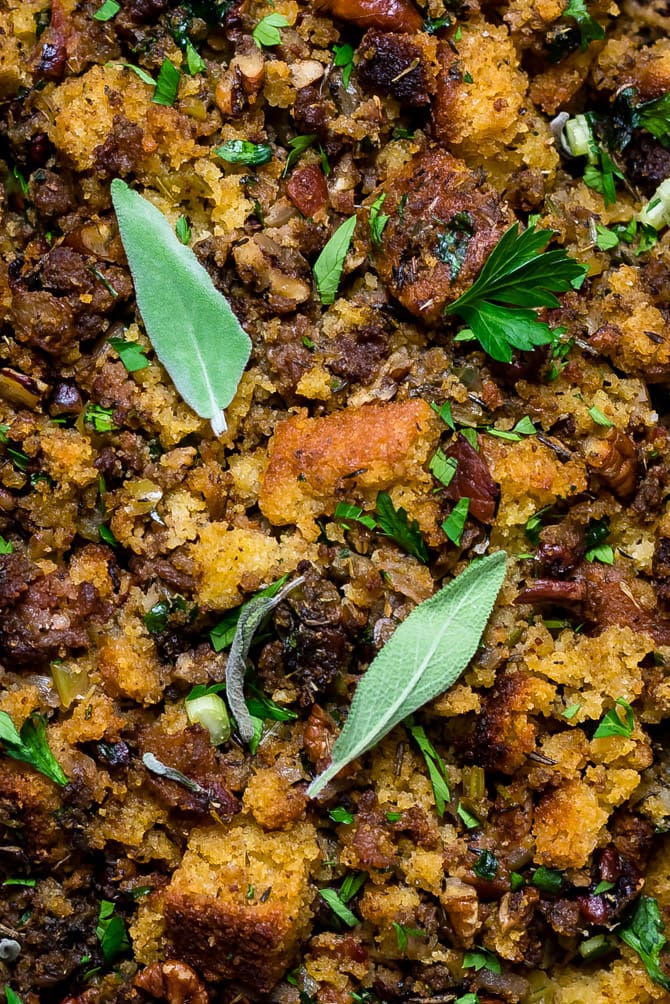 WHAT MAKES THIS THE BEST CORNBREAD STUFFING?

Whenever I decide to try to perfect a classic recipe, I start off with a list of what I imagine the absolute best version of the dish would taste like. For me, the best stuffing sounds just like this:

Now, a lot of people believe that it’s important to keep stuffing “very mildly flavored” (AKA bland) because it’s supposed to be more of an accompaniment to the turkey and gravy than a feature dish of its own. I disagree. While I think it would be a bad idea to include outrageous or overwhelming flavors in your stuffing that don’t mesh with the overall mood of the rest of your Thanksgiving dinner, I think stuffing deserves to be as delicious as possible in its own right. After all, if it’s not, why even bother serving it?

So I took my checklist and got to work. After a few rounds of recipe-tweaking (and a crazy amount of stuffing consumption– oh the things I do for you guys), I nailed it. I made a stuffing that had everything I’d wanted: the perfect mix of textures from crumbly sausage to tender cornbread to crispy bacon and crunchy pecans; an uncomplicated but very present flavor profile; and a golden brown top with a tender center.

If that sounds like the perfect stuffing to you, too, then behold this baking dish of beauty and read on, my friend. 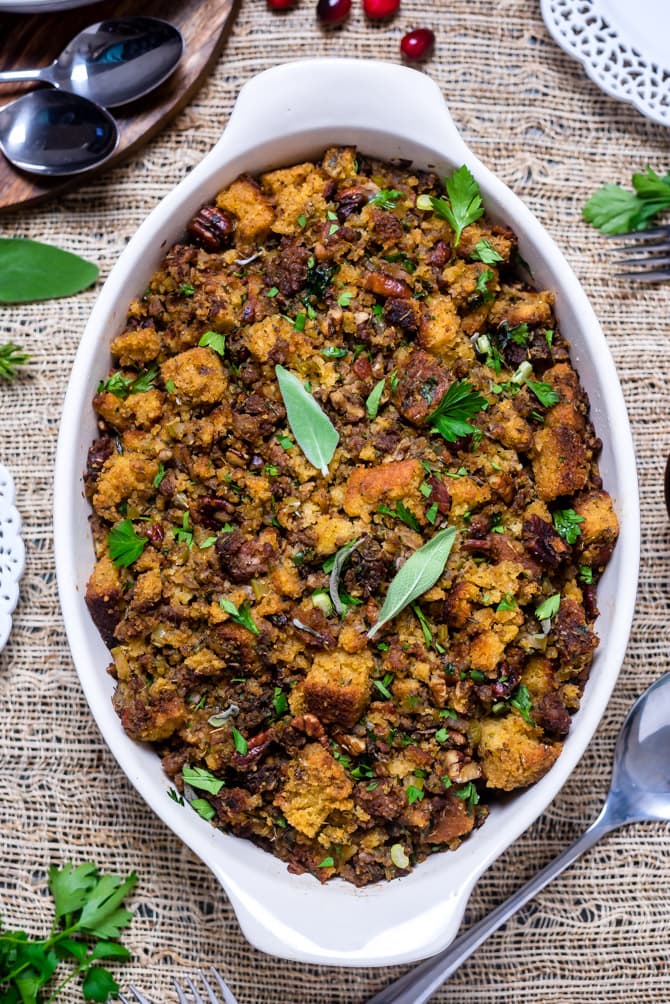 Yes, I said baking dish. This stuffing isn’t stuffed inside of a turkey, which to many people means it’s called dressing, not stuffing. To be honest, there’s probably even more debate over what to call this dish than there is about how to make it! In much of the South, it’s called dressing either way; while where I’m from, it’s always “stuffing”, no matter what. In Pennsylvania, it’s even sometimes called filling. Have you ever heard of that?

But while we’re on the subject of stuffing vs. dressing, let me mention one thing that does actually matter:

Stuffing, being made mostly of bread, is extremely porous. That’s what allows it to absorb all of the liquids we add in like melted butter, chicken stock, and drippings. But it also means that, as it sits in that not-yet-cooked turkey, juices that might contain salmonella soak into that stuffing, too.

In order to kill that bacteria and be safe to eat, that stuffing has to reach 165°F, just like the rest of the turkey. However, it’s smack dab in the middle of the bird’s cavity, where it doesn’t heat up nearly as fast. As a result, the turkey meat will be cooked before the stuffing comes to a safe temperature, which means you have to make a choice between undercooked stuffing or overcooked turkey. Neither sounds like a particularly good time to me.

The best choice here is to avoid that predicament all together and cook the stuffing (or dressing, if you prefer to call it that) separately. 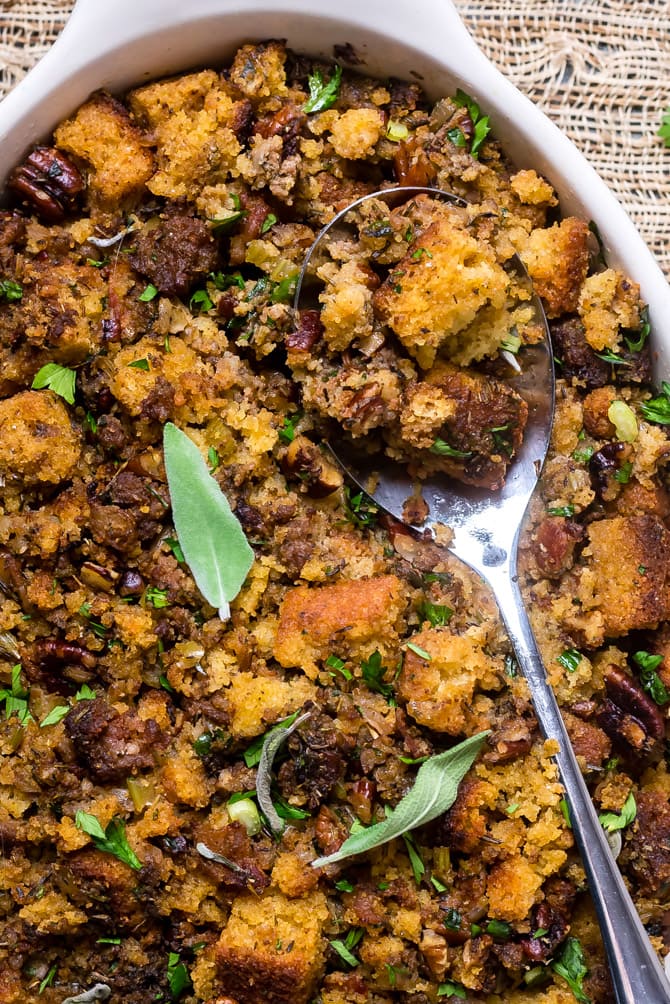 HOW TO MAKE THE BEST CORNBREAD STUFFING WITH SAUSAGE AND BACON

Just because you’re cooking the stuffing separately doesn’t mean that you can’t infuse it with a ton of flavor. To do so, you just need to follow a few steps. 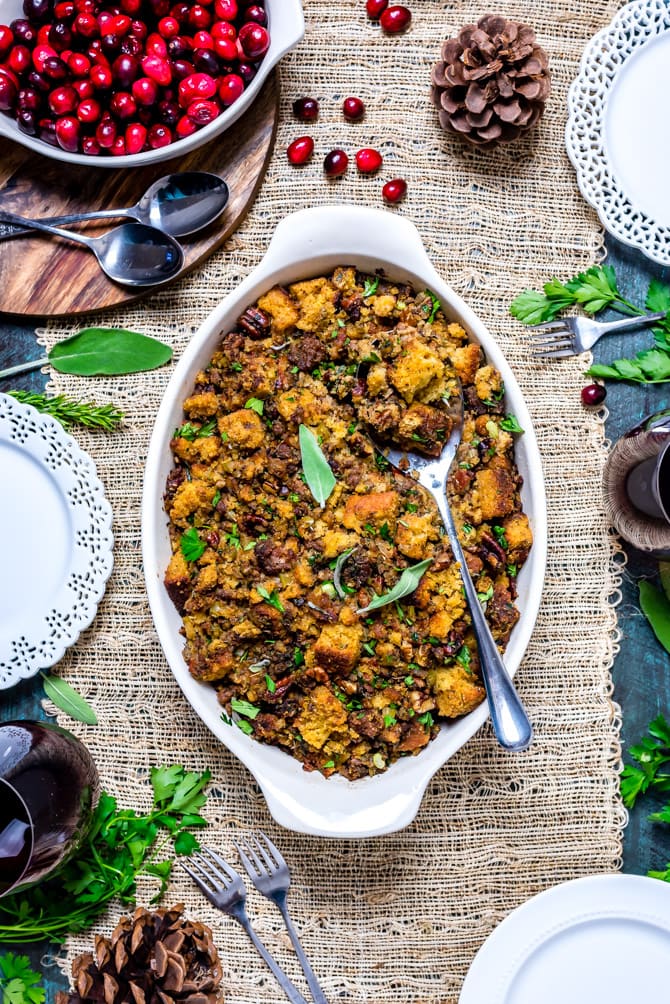 CAN I MAKE THE STUFFING AHEAD OF TIME?

You can absolutely make The Best Cornbread Stuffing with Sausage and Bacon ahead of time. If you’d like a head-start on your holiday cooking, I recommend whipping it up the night before Thanksgiving and leaving it in the refrigerator, unbaked. Pop it into the oven when the turkey is done, and that’s all you have to do the day of!

And while I recommend following the instructions above, you can also fully bake the stuffing ahead of time and reheat. It’s surprisingly good that way. Trust me, I ate this stuffing for almost a week straight because I made so much of it when testing!

(Don’t let me fool you, I loved every second of it.)