These fudgy homemade brownies feature crisp, crackly tops and chewy, dense, super chocolaty centers. If you want decadent brownies that taste leagues better than boxed mix but don’t require a ton of effort, this is the brownie recipe for you! 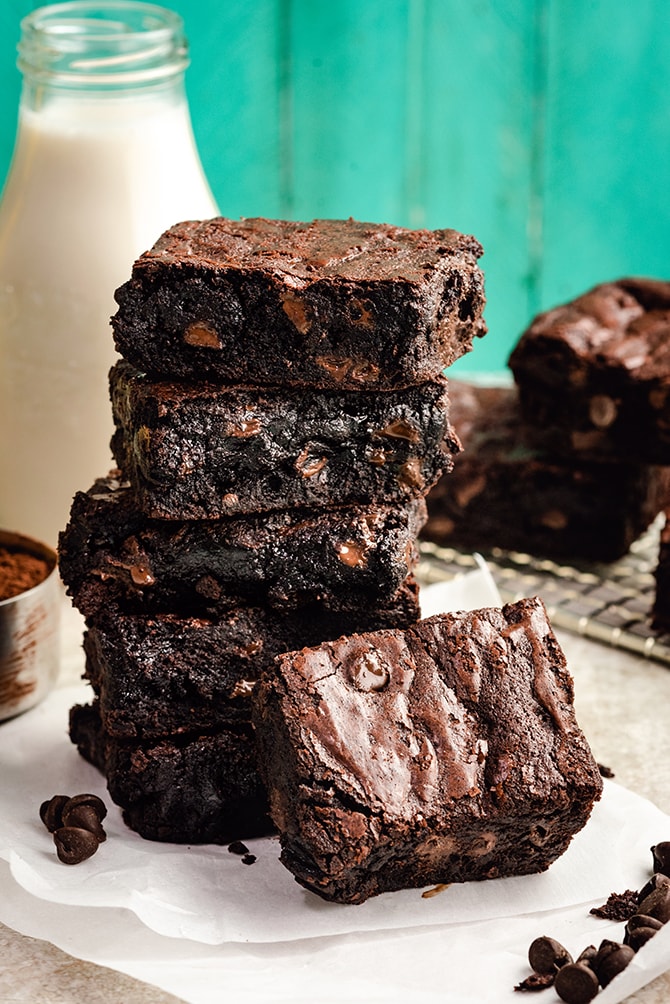 Extensively testing baked goods is kind of my thing (you know, aside from the whole “making an obscene amount of appetizers” deal), so this isn’t my first brownie rodeo. In fact, several years back, I made a recipe for The Best One Bowl Brownies that truly blew the minds of everyone who tried them, and that I still get messages about constantly. I mean, con.stant.ly.

So, uh, why does this recipe exist at all if that one was already so good, you ask?

Because I’m nuts? I don’t know. We’re not really talking about the good, quirky, haha-so-cute kind of nuts here, we’re talking the kind of obsessive that makes a girl question her already much-loved, much-used brownie recipe and instead makes her decide to derail her entire schedule and tick off her boyfriend because she is up baking her umpteenth tray of brownies at 3am for the 5th night in a row, checking to see if a slight tweak in the amount of granulated sugar results in a glossier crust (spoiler alert: it does).

No, okay. In all seriousness, it’s because while using 4 types of chocolate for one small batch of brownies will give you amazing, rich, and insanely chocolaty results in the best way, it’s just not very accessible for your go-to brownie recipe. I wanted to make brownies that don’t break the bank, but still give great, deep chocolate flavor. They needed to have a shiny, crackly crust that give way to dense, fudgy, chewy centers and make enough for a big batch, not just a tiny 8×8 pan full. They also had to be easy to make. No double-boiling, multiple bowls, involved mix-ins– none of that. Simple, ridiculously good, better-than-box mix brownies or bust.

Picture 18 trays of brownies scattered around my kitchen with sharpie notes scribbled on the sides and post-its stuck to the foil, and then me, in the center of it all, covered in flour and cocoa powder, frantically explaining the exact science of the perfect brownie to anyone who will listen like the Pepe Silvia Always Sunny meme, and you’ll have a somewhat accurate example of what yesterday looked like for me. But I’ve finally nailed it. I might be a little nuts, but this is the kind of nuts that DOES NOT REST until she comes up with what are truly, honestly, 100% without doubt the best freaking brownies ever. 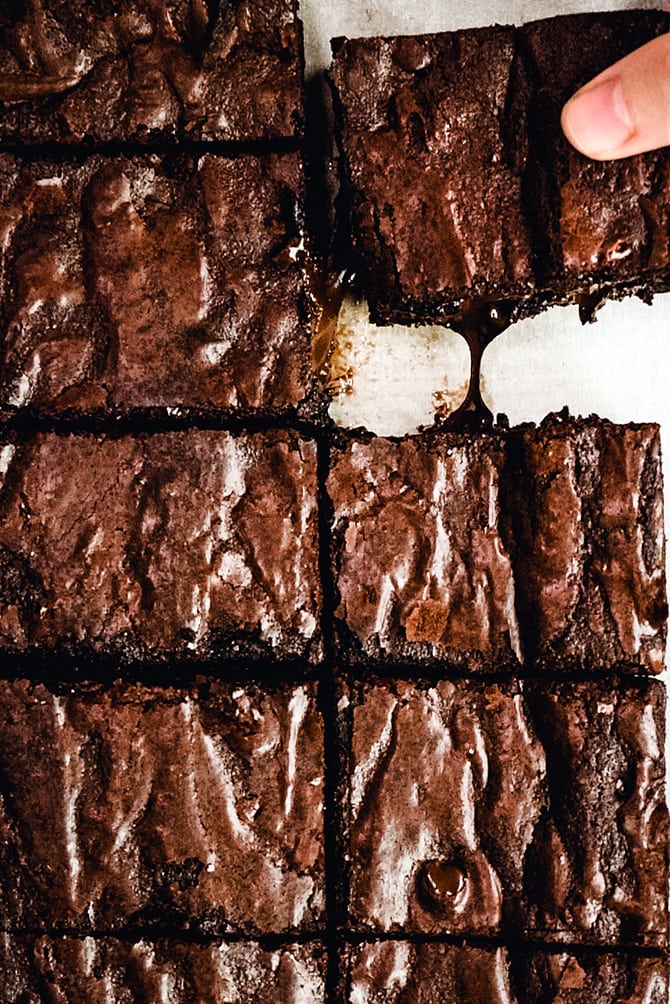 SO WHAT DOES MAKE THE PERFECT BROWNIE?

In my last brownie recipe, I attempted to answer this question, but I figured it couldn’t hurt to reach out for more answers and see what the rest of the world thought. I decided to ask friends, facebook, and reddit, and as I imagined, people didn’t really fully agree.

The divide, as you can probably guess, skews largely toward center pieces over edge pieces, no mix-ins or just chocolate chips / chunks over nuts or other additions, and the rest was pretty random (though still helpful information, for sure). There were some people who preferred their brownies fudgy, others ultra-chewy, and many somewhere in between. There were even some outliers who wanted their brownies to be “basically just chocolate cake”… and you know what? I’m sure we can find it in our hearts to forgive them somehow.

Based off of all of the information, here’s what I determined would create a brownie recipe to please almost everyone:

So all of the above became the building blocks of this brownie recipe! 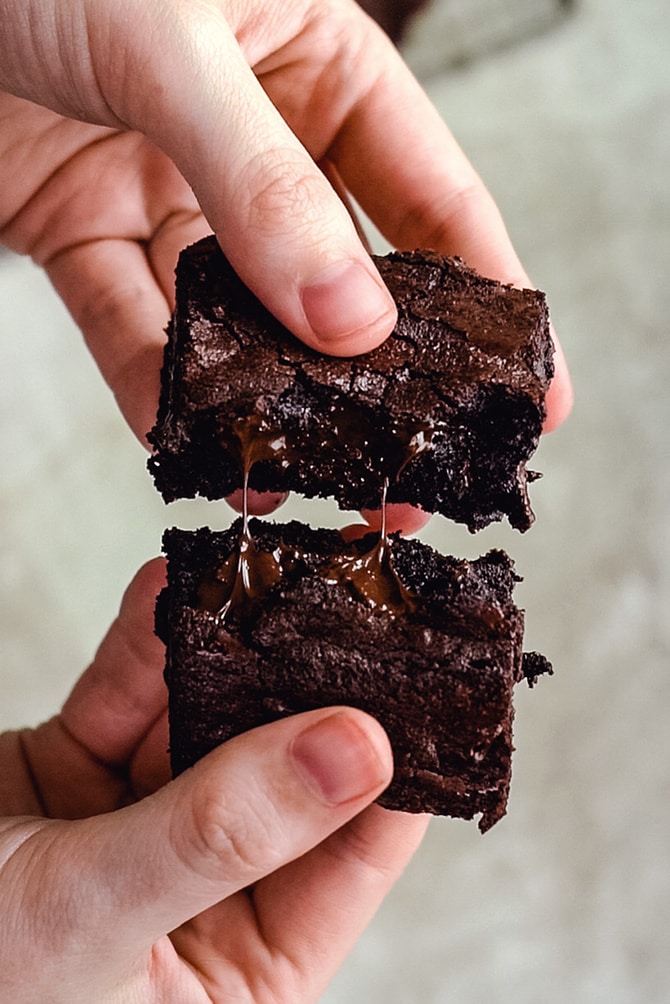 HOW TO MAKE FUDGY BROWNIES

They first key to making fudgy brownies is to have a high ratio of fat to dry ingredients. This means dialing down the amount of flour in most conventional brownie recipes and/or increasing the amount of butter.

In my initial tests, I found that simply doing the fat increase yielded good results, but that I still wasn’t getting the same gooeyness that I get from boxed brownies unless I severely undercooked them. The desire wasn’t to actually undercook my brownies, it was for them to be gooey and decadent and fudgy no matter what. Simple solution right? Just add more butter! But it wasn’t that easy. Increasing the amount of butter to an even higher ratio left me with brownies that were overwhelmingly, sickeningly rich, and baked up to be not all that pretty looking in the end.

So I instead looked at the type of fats I was using. I was largely relying on saturated fats– I had melted chocolate already, which includes cocoa butter, and I was already going all in on melted butter to give the brownies their richness and flavor. However, these ingredients don’t stay melted at room temperature. Unsaturated fats, on the other hand, such as vegetable oil and canola oil, do stay in liquid form at room temperature, meaning that they would allow the brownies to keep that moist, fresh-from-the-oven quality whether they were warm, cold, or anywhere in-between.

As a result, I decided to add a bit of oil and increase the amount of eggs. What?

Using only oil might sound appealing for ultra-fudgy brownies, but you’d sacrifice the flavor of butter, which is somewhat obvious. But given that we’ve already got the cocoa butter in the melted chocolate at work here, that acutally isn’t the greatest crime in nixing the butter here. The issue is that oil does NOT like aeration at all, and even the densest of brownies require a certain amount of aeration to 1) separate them from literal blocks of actual fudge and 2) allow that gorgeous crackly crust to form. So what’s a gal to do if she wants enough unsaturated fat to make a difference, but not enough to ruin her crackly crust?

Eggs actually contain a mix of saturated and unsaturated fats, so adding more really doesn’t do too much to help nor hurt the balance of fats. However, it does encourage more aeration, as egg whites beat up easily in a batter. More egg whites = more meringue = crackly crust = crisis averted. 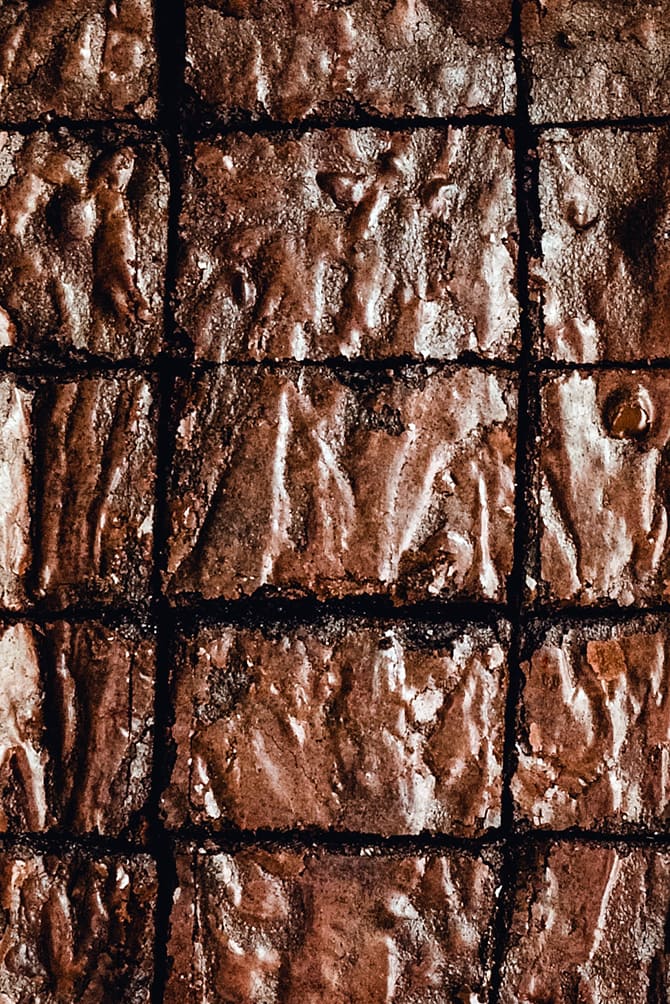 HOW TO MAKE BROWNIES WITH A SHINY, FLAKY CRUST

As I mentioned above, aeration is key in making the shiny, flaky crusts on top of brownies. This is because the eggs and sugar form a meringue of sorts that rises up and solidifies while baking, giving you that shatteringly, papery crisp layer. Because we keep things simple and make this recipe in one bowl, getting that meringue down solid is a bit more difficult than some recipes that use separate bowls for whipping eggs, melting the chocolate, etc., and because we add extra oil, we have to add extra eggs for good measure to encourage that meringue-sort of reaction.

That sounds simple, but here’s the thing. There’s more to it.

So, in the past, I’ve basically trashed chocolate chips as not as good as bar chocolate, and instead preached the virtues of chopping up some high quality bar chocolate and melting that instead, as it has fewer additives and generally is easier to melt and so on and so forth.

Here I am, walking all of that back. Sort of. Well, not really.

There is truth to all of that, of course. Bar chocolate is better. It does have fewer additives. It does melt easier. But here’s the thing: If you want a glossy, shiny, flaky crust, it’s a thousand times more easy to attain when using chocolate chips. And it’s due to exact things we like to villify: those stabilizers and additives.

I did several blind taste tests. I hate to tell you, but even when I used the same brands (and same amounts) of bar chocolate vs chocolate chips, people almost ALWAYS chose the brownies made with chocolate chips. I know. It blew my mind too.

You can and absolutely should still use high quality chocolate chips, but definitely opt for the chips. Bonus: they retain their chip shape when you fold them into the batter later, which creates more textural interest later in your brownies vs chunks which tend to dissolve into molten pools of chocolate danger lava. You also won’t have to buy multiple different bars and chips for this recipe– you just need one 12 ounce bag of chocolate chips in addition to your dutch cocoa powder. 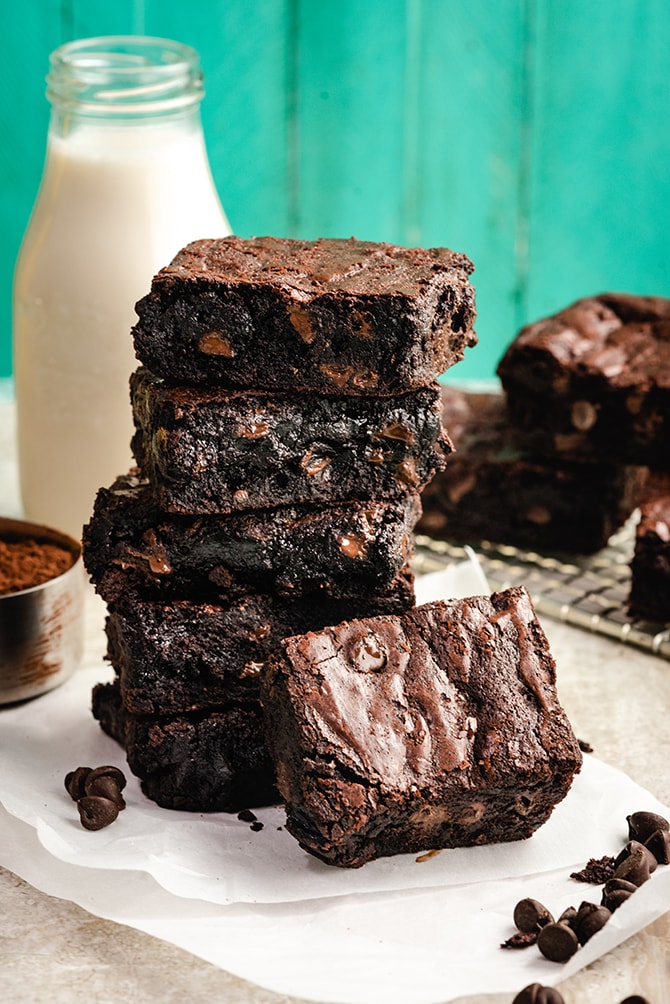 HOW TO MAKE ULTRA-CHOCOLATY BROWNIES

There are a few keys in ensuring that these brownies really taste like good chocolate.