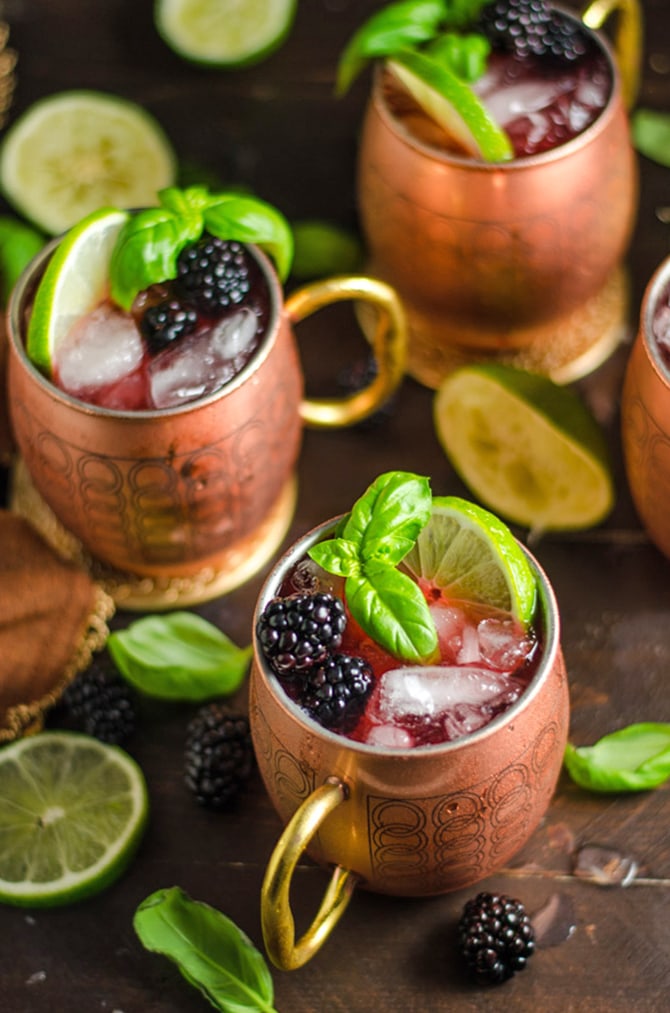 Eight years ago, I was finding respite from the constant chaos of my apartment (that’s a story for another time) with my upstairs housemates and an oversized bowl of beef-flavored instant ramen. Komal made it for the four of us, because despite being a stereotypical broke and miserable college student– as we all were, at the time– she couldn’t help but be a generous hostess. Years later, Komal would go to culinary school, work in a Michelin-starred restaurant, and open her own incredibly successful gourmet ice cream shop. I’d also go on to be in the food business, as you can tell. But back then, we ate instant ramen. Lots of instant ramen.

Our drinks at the time were similarly stereotypical of college students. Kegs of cheap beer and jugs of jungle juice abounded. If we were feeling fancy, we’d enjoy the occasional thrown-together monstrosity– my then-roommate Jackie often made a specialty that she called “stravodrum”, which was basically the remnants of our liquor cabinet thrown together with iced tea. Surprisingly drinkable, but not exactly something that would wind up in a bartender’s handbook.

I had no earthly idea what a Moscow Mule was back then. In fact, I had no idea what most cocktails consisted of, in those days. I wasn’t even old enough to get into the bar yet, though I tried a few times. 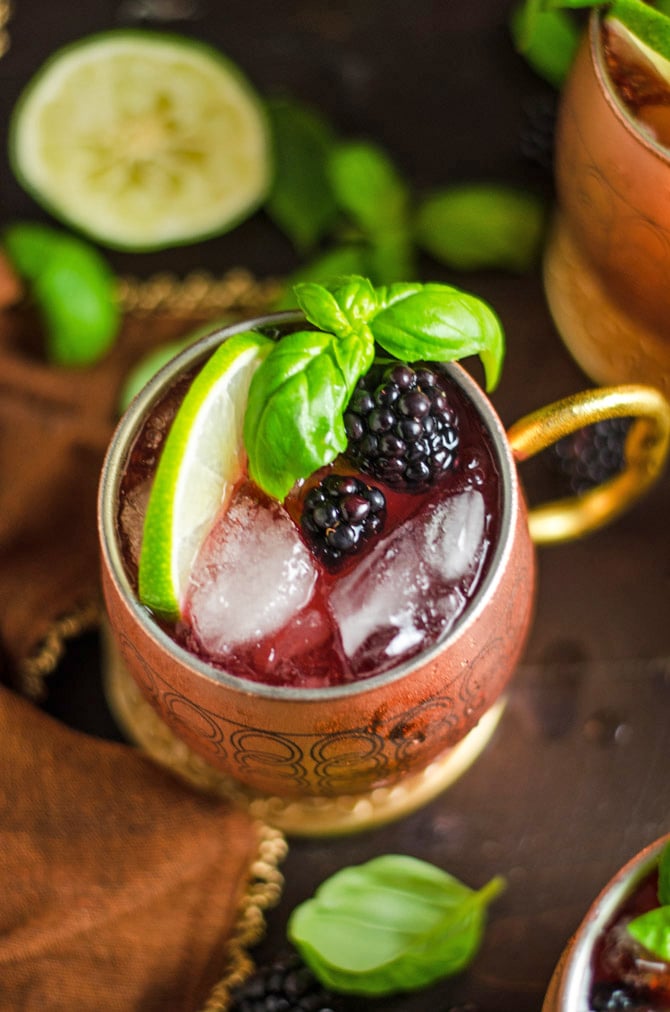 Ah, those were the days… I guess. That’s what I’m supposed to say, right? Truth be told, I think I much prefer things the way they are now– with actually enjoyable food and beverages, and no college essays looming over my head.

I do miss those housemates a lot, though. Luckily, they are finally coming to visit me next week! It’ll be the first time we all have been together in years. However, there will be no ramen nor jungle juice this time. This time, I’m making our snacks from scratch, and we’ll be sipping Blackberry Basil Moscow Mules. 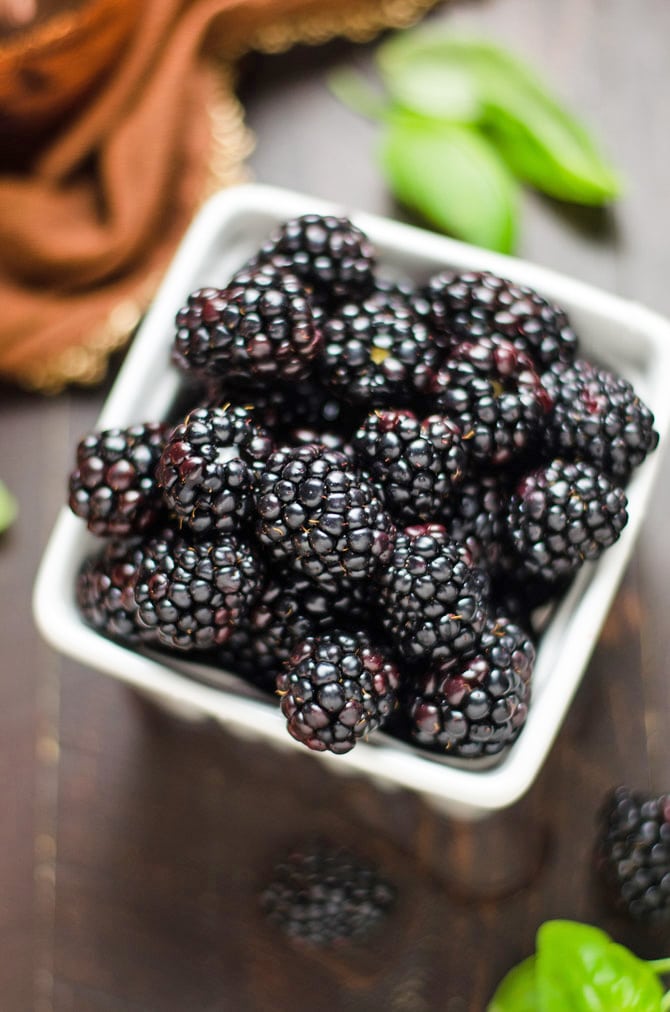 The typical Moscow Mule is a super simple cocktail featuring vodka, ginger beer, and lime juice. It doesn’t necessarily need any updating, but I thought that the sweet and spicy ginger beer would pair deliciously with the tartness of fresh blackberries and the peppery, minty flavors of basil. And not to pat myself on the back or anything, but I was right.

These cocktails are ultra-flavorful without relying on cloying sweetness to make them enjoyable. There’s nothing frou-frou about them, despite the addition of fresh berries– the ginger beer keeps that fruitiness in check. I can imagine drinking these with the guys while watching the upcoming championship games just as easily as I can imagine drinking them on a hot summer day by the pool. And I plan to do both.

Needless to say, Blackberry Basil Moscow Mules are going to be a regular cocktail hour creation in this house. 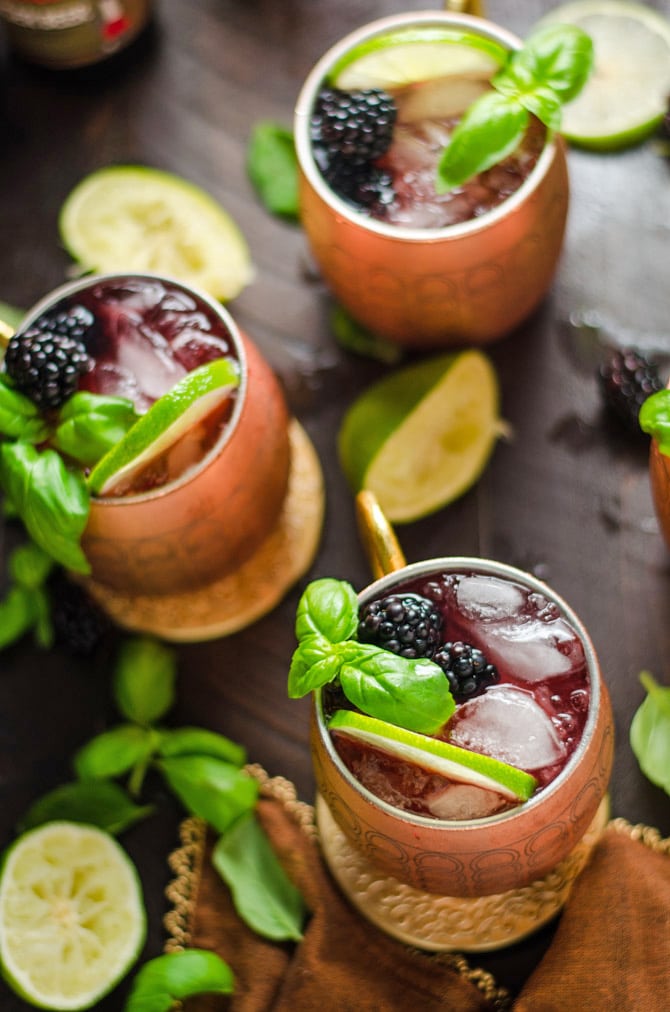 I wanted to keep this recipe quick and easy to make, so I decided not to mess too much with the basil or blackberries. Instead, I simply muddle them with the vodka and strain out any solids, and then mix in the lime juice. I serve the mixture over ice in copper mugs (which are a must if you’re making Moscow Mules, of course).

All that’s left to do at that point is to add in the ginger beer and garnishes, and you’re golden. Or copper. The point is, the cocktails are ready for drinking. 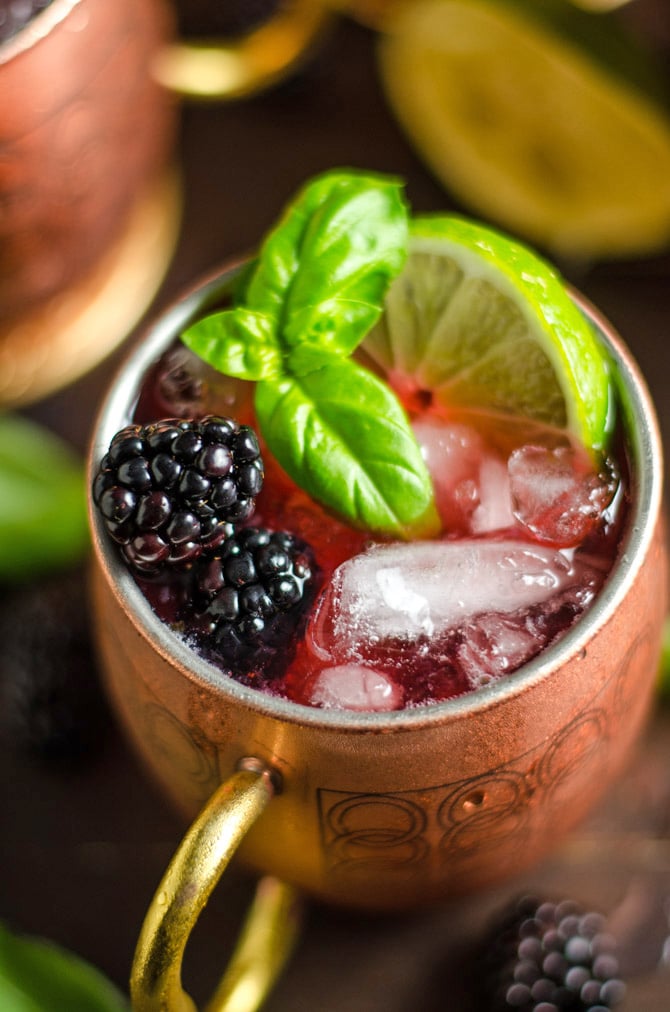 I can’t wait to make new memories with my old friends with plenty of these Blackberry Basil Moscow Mules on hand. And of course, to indulge in a few more by myself for the time being, while I figure out the remainder of the next weekend’s menu.

Oh and by the way, before you indulge, don’t forget to snap a photo or two and tag #hostthetoast on Instagram, so you can show your Blackberry Basil Moscow Mules off to the world. And let me know if you love them as much as I do! 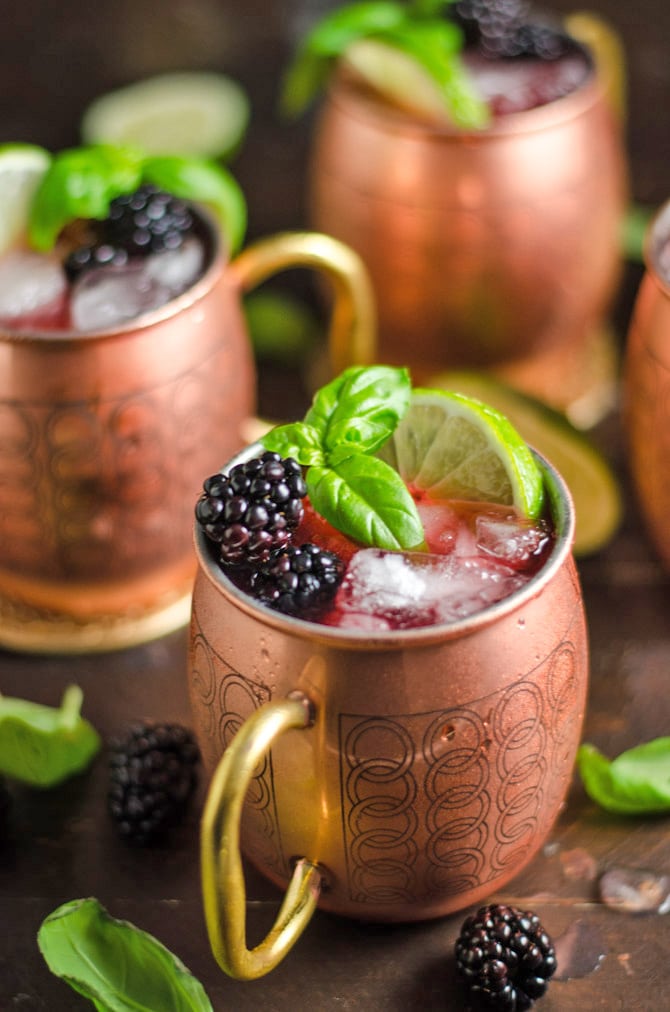