I’ve never been a huge fan of hot chocolate, but I also never realized that real hot chocolate doesn’t come from a powder packet.  In real hot chocolate, you actually melt chocolate and add milk and cream, which probably should be obvious but I never even considered it.  It tastes like liquid happiness.  Or at least this recipe does, especially with the additions of raspberry flavor and a little tipple. 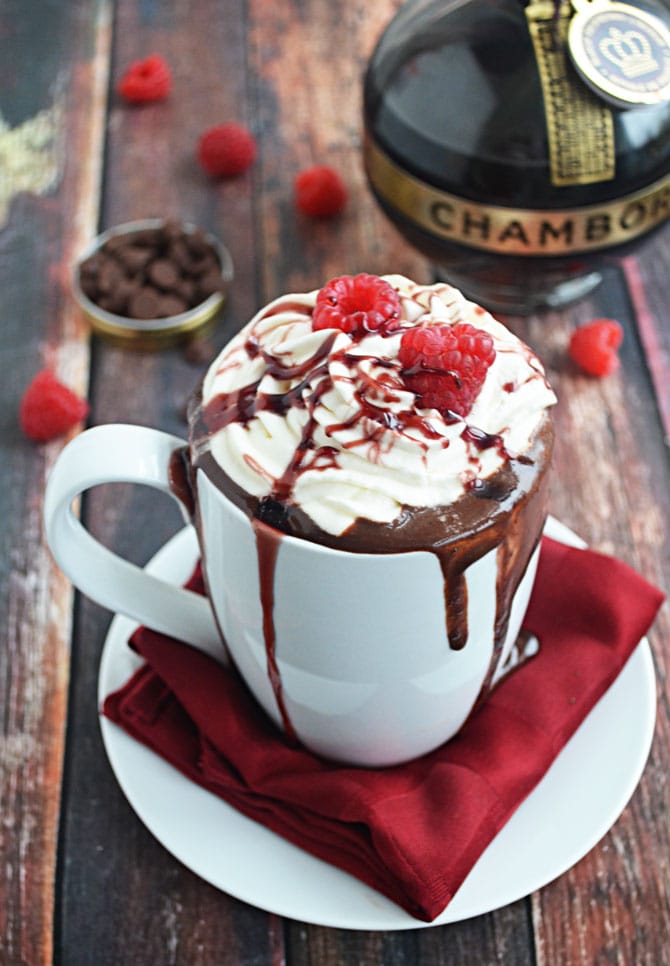 This isn’t a recipe you want to share with red-cheeked children when they come back in the house from playing in the snow.  The Chambord reserves this special treat for the grown ups who crave the nostalgia of hot chocolate, but with better taste and a bit more than a sugar buzz.

This also isn’t the first time that someone suggested that hot chocolate be for adults.  Sure, there was last year’s post for Adult Salted Caramel Hot Chocolate Floats (What can I say?  If I’m drinking hot chocolate, you can bet there’s a bit of booze in it), and there are also a million other spiked hot chocolate recipes floating around the web, but I’m talking about going a little deeper back in history here.  Like thousands of years back.  You see, up until the mid-1800s, chocolate was only consumed in liquid form, and you can bet that it wasn’t a treat for children, even without any alcohol added in.   Instead, chocolate was widely believed to be sacred sustenance, a symbol of power, and even sometimes magical.  It was reserved for royals, warriors, and the upper tier of ancient societies.  It was not a kid’s drink, so don’t feel bad when you keep this one away from the little guys.  You’d just be honoring the history of chocolate.  It’s a noble thing to do.