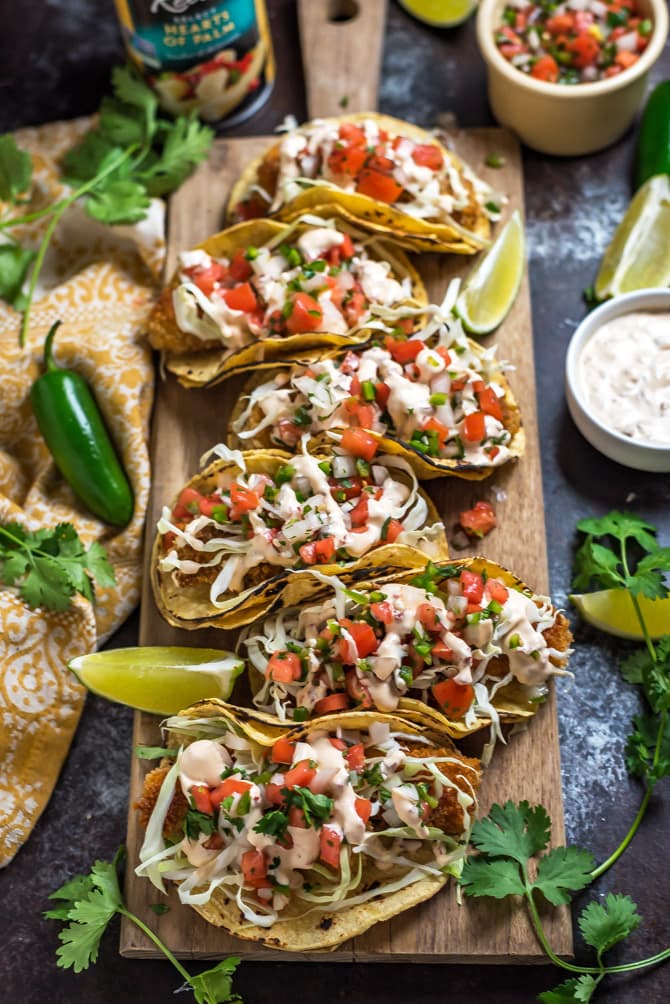 This post is sponsored by Reese Specialty Foods, who inspired me to broaden my taco horizons– for which I’m always grateful. Once you try these Crispy Hearts of Palm Tacos with Chipotle Baja Sauce, trust me, you’ll be grateful, too.

I’ve purposely not mentioned it up until this point because we’ve been, well, slightly in denial, but James recently got a new job that allows him to work from home.
At home, you guys.
With me.

Okay, not with me, but we’re both at home… all day, every day. And even though we work in separate office rooms, it’s still so weird and awesome to me that I can hear him typing away at his computer, run in to ask him a question, or shove a spoon at him to taste-test whenever I want.

For 2 years of our relationship I lived over an hour away from James and I only saw him on weekends. Now he can’t escape me. Poor guy. 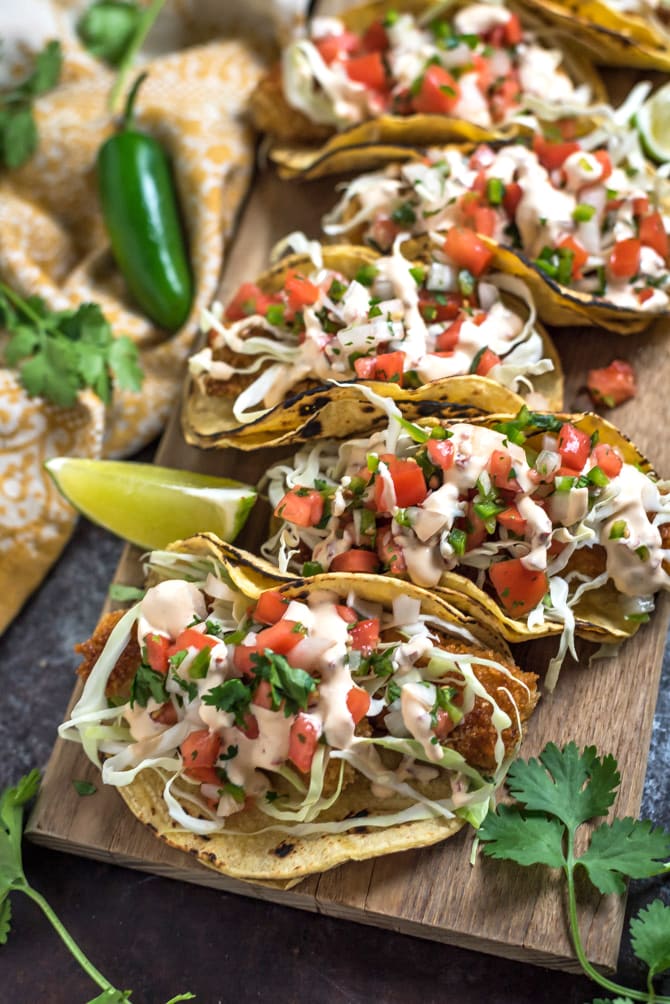 Before you feel too bad for him, though, keep in mind that now that he’s home for lunch every day, I’ve been using it as an excuse to do some extra cooking and churn out some new recipes. That means James has gotten pretty much whatever he’s wanted for lunch for the
past week… AKA a ton of Mexican food. Burritos. Quesadillas. About TEN MILLION types of tacos.

It’s hard for me to run out of taco ideas, truly. They’re quite possibly my favorite things in this whole wide world– I literally conjure up taco filling ideas as I’m falling asleep at night. I have visions of tacos. But when I’d used up all of the ground beef and chicken breast my last grocery trip had to offer, I started to draw blanks. That is, until I remembered the can of Reese Hearts of Palm I had in the pantry. 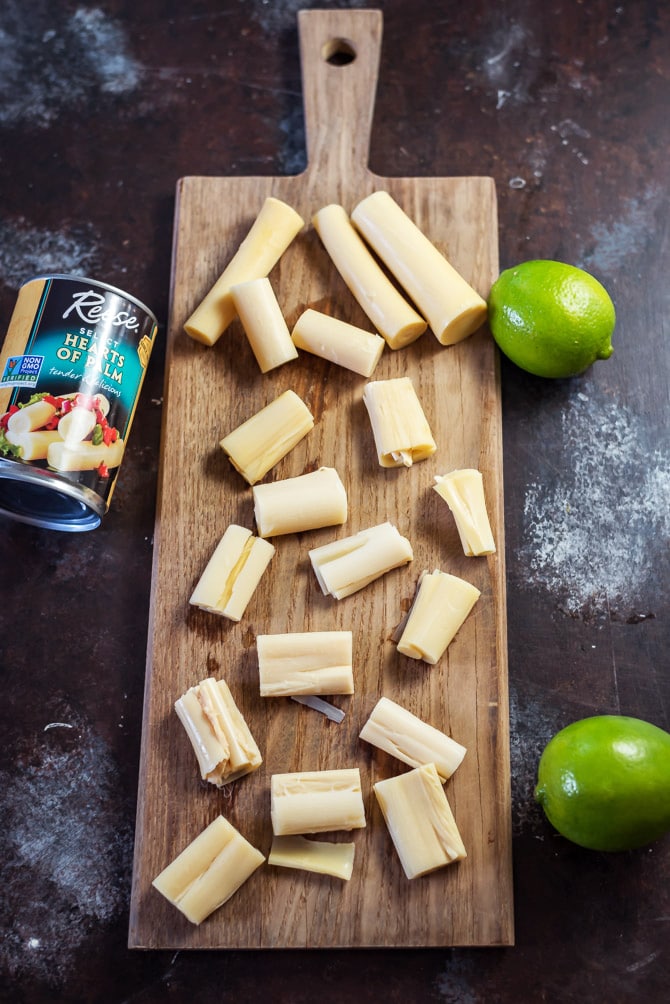 I’d been saving them for a salad recipe I’d been working on, but I couldn’t shake the idea of Hearts of Palm Tacos. Battered and covered in panko, they’d be crispy on the outside, tender on the inside, and they’d work wonderfully with the heat of chiles and the creaminess of sour cream. I’d recently read that hearts of palm are sometimes used as a vegetarian substitution for seafood in dishes like ceviche and crab cakes, so why not go the baja fish taco route?

The thing that makes hearts of palm such a great sub-in for seafood is the texture it gets when cut up– it’s almost flaky in the way it shreds apart. It also, like fish, is a great absorber of flavor, though it doesn’t have any of the typical “fishy” taste. To me, that’s a plus, because while I’m a huge fish taco fan, James doesn’t like the flavor of seafood. Hearts of palms could give us the best of both worlds. 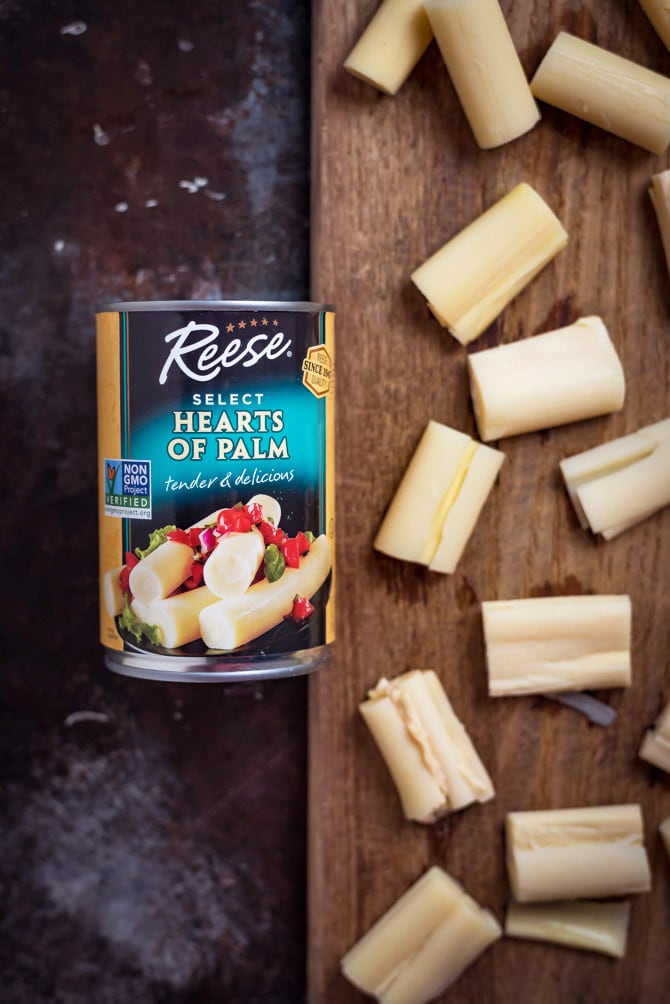 Though they may not be super familiar here in the states, Reese Hearts of Palm are a known delicacy around the world. They’re actually a vegetable that’s harvested from the inner cores and growing buds of certain palm trees, and they happen to be incredibly versatile. Here, I’ve made them into tacos, but as I mentioned earlier, they work wonderfully when cut up raw in salads, or even when they’re baked into a casserole. Not only are they delicious and adaptable, but they’re also good for you: they’re low in cholesterol, rich in potassium, contain Vitamin C, and are high in fiber, which makes them a great pantry staple.

(By the way, if you download the Ibotta app, you can earn rebates on Reese products such as Reese Hearts of Palm and Reese Artichoke Hearts! Check it out at bit.ly/ReeseIbotta now!) 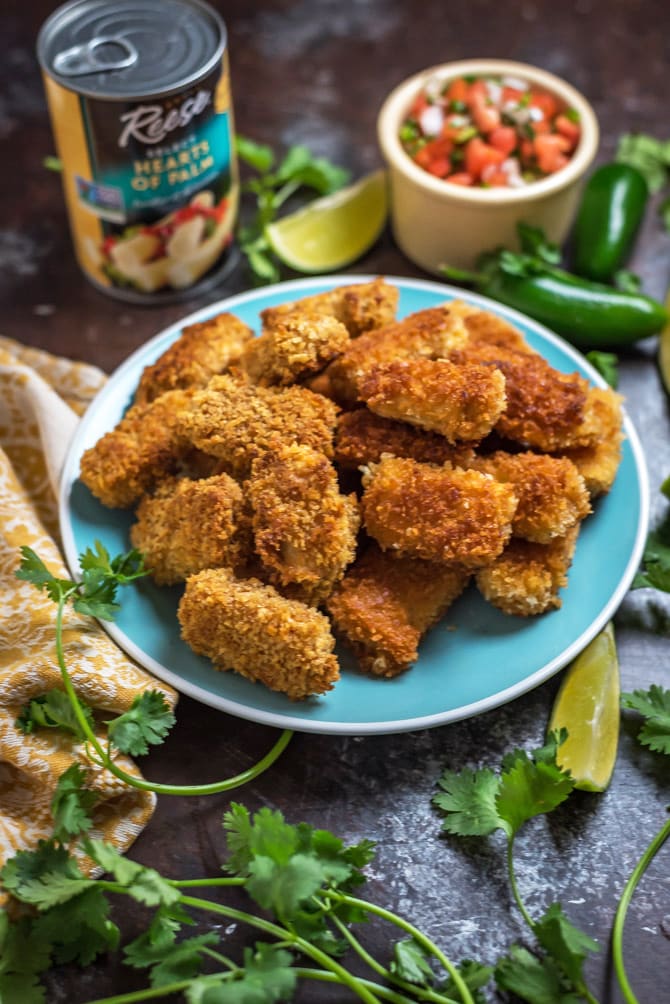 While we’re on the subject of the healthiness of hearts of palm, you should also know that I decided to test these two ways (after the first batch was such a hit, but I’ll talk more about that in a second). The first time I made these, I pan-fried them, but out of curiosity I decided
to try baking them the second time around. The baked batch was practically identical in taste. In the photo above I’ve got the baked ones on the left side of the plate and the pan-fried ones on the right. You can barely tell the difference, so if you’d like to pop ’em in your oven instead, I say go for it. 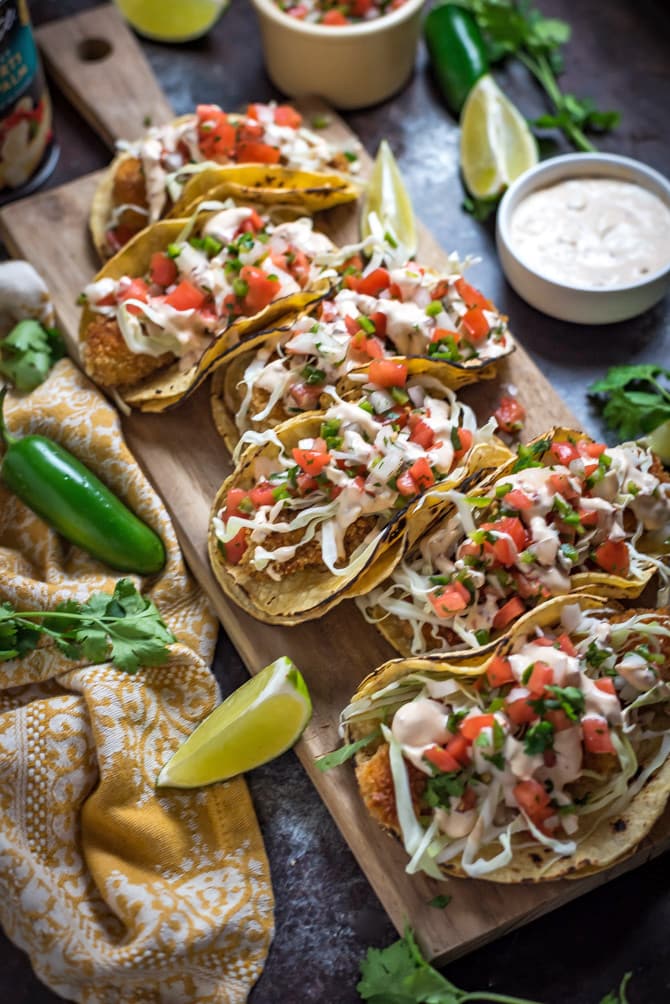 No matter how you choose to cook them, I really think you’re going to love the Crispy Hearts of Palm Tacos with Chipotle Baja Sauce. I know James did, and so did my housemate Mike, and my friend (and video-creating helper) Rob even said that he’d order them at a
restaurant if they were on the menu because he loved them so much. That’s three meat-eating dudes drooling over vegetarian / vegan friendly tacos. Yeah, I’m patting myself on the back for this one.

For the Chipotle Baja Sauce:

For the Crispy Hearts of Palm:

* If you’d prefer, place the breaded hearts of palm on a foil-lined baking sheet, spray lightly with oil, and bake at 425° until crispy, about 15-18 minutes, flipping halfway through.

This post is sponsored by Reese Hearts of Palm. All thoughts and opinions are my own.