Jack Daniels Burgers. These juicy, glazed cheeseburgers taste just like the ones at T.G.I. Friday’s. The sweet, sticky glaze (and a few tips) will take your typical backyard burgers to the next level. 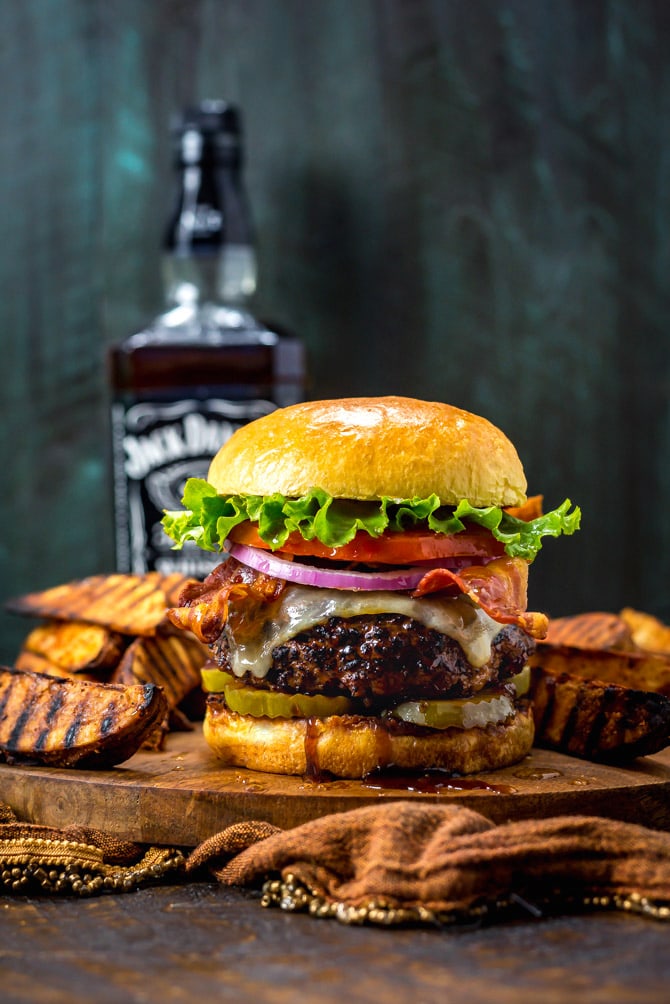 Like most of the recipes I share here, this one started with an obsession. Unlike the rest, however, the obsession wasn’t mine at first. In fact, I’d never eaten Jack Daniels Burgers before I first tried to create this recipe years ago. Actually, I’d never eaten any burger– at least not since I was old enough to remember.

(I had strange food aversions back then, to say the least. Who would have thought I’d wind up here?) 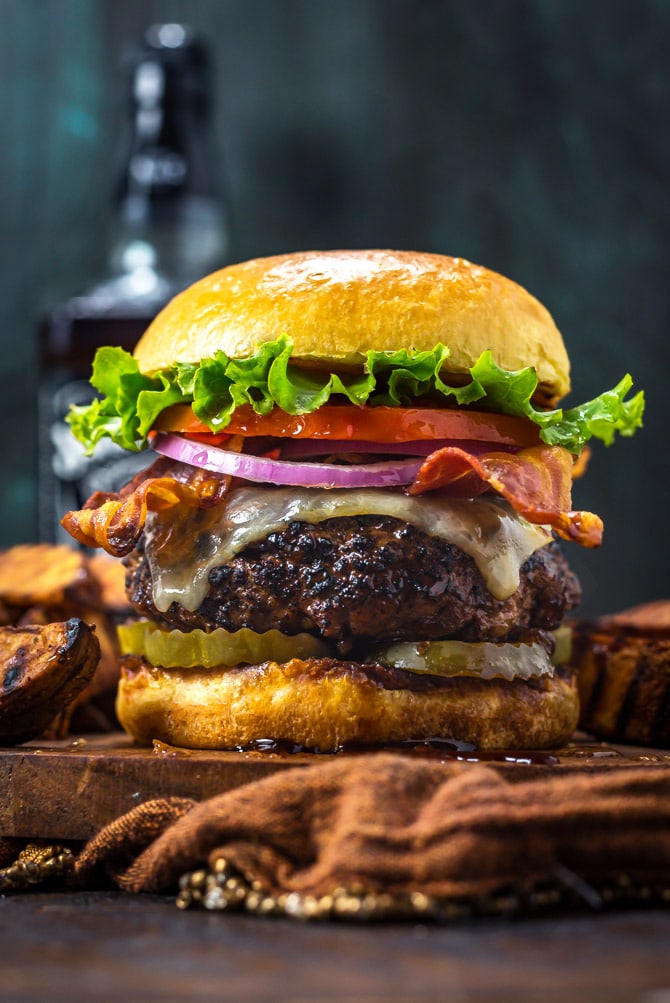 I did wind up at Friday’s too often back in high school, though, usually after a shift working down the street at the mall’s Auntie Anne’s. It was one of the few near-by places to sit and eat that was open past 11, and it was priced reasonably enough for a 17-year-old girl who flipped pretzels part-time to afford. Most importantly, it’s where my friend Wesley would suggest eating, and being that I have always been the least decisive person ever, I went along with any opportunity to not have to pick.

On the subject of being the least decisive person, I always had a hard time picking what to eat (even though I’d eaten there only days before). But Wesley… Wesley never had to even look at a menu. He always ordered Jack Daniels Burgers. ALWAYS. Twice, three times a week.

There’s that obsession I was talking about. 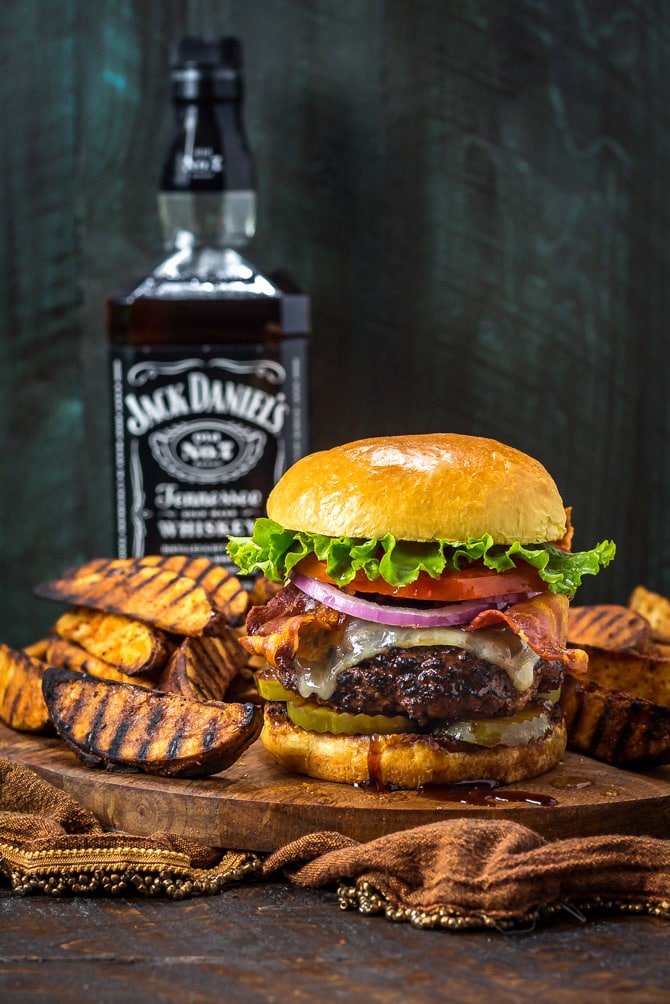 And if there ever was a burger that seemed appealing to me, it was the Jack Daniels burgers he would order, shimmering with the sticky glaze, complete with melted cheese and crispy bacon poking out from the sides of the bun.

So when I found myself in charge of a cookout for the first time since starting my blog (and since we’d stopped going to Friday’s years before), Jack Daniels Burgers were the first thing that came to mind. I couldn’t just make any boring burger that I’d slap on the grill– I was there to impress. And to try my first burger, apparently. 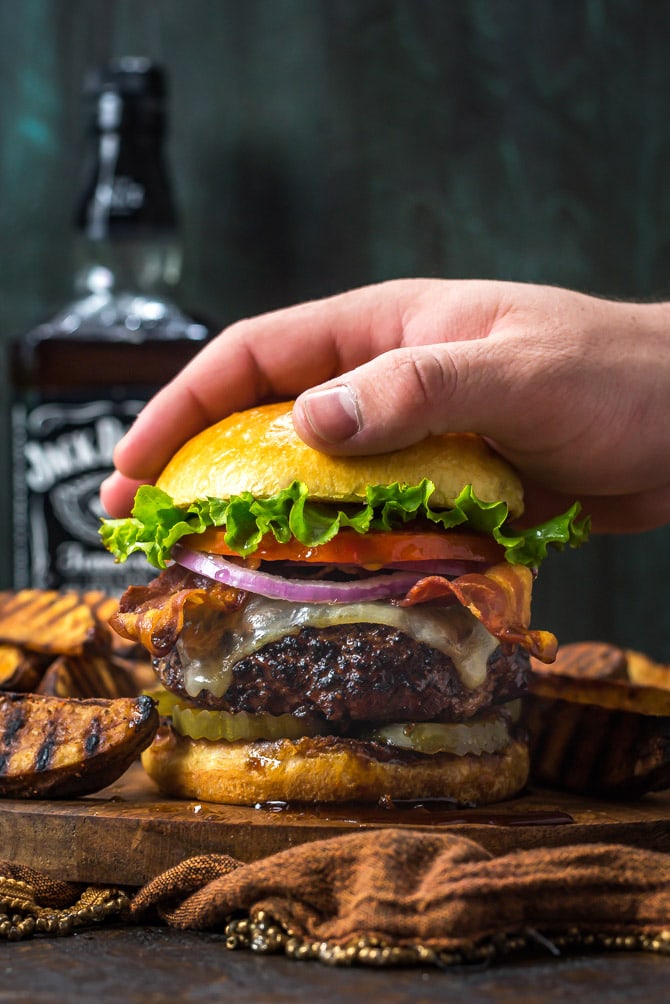 So I researched. And after days of pouring through cook books and online forums and every resource I could get my burger-hungry hands on, I felt confident enough to step up to the grill. Or I guess I should say the stove, because the real key to making these burgers live up to their full potential lies in that whiskey glaze.

The glaze is simple to make– just throw it all in a saucepan and let it simmer until it reduces to a nearly-syrupy consistency. I make a big batch because it saves well in the fridge, and I use the leftovers for everything from shrimp to ribs to chicken and even to brush on vegetables that I throw on the grill. I’ve even given the glaze as a gift before. Packed up in a mason jar, it’s been the perfect birthday gift for Wesley year after year.

And the great thing about the glaze is that as it simmers, I’m able to prepare the other burger ingredients. I form my patties (complete with indents on the top to stop them from swelling up), cook the bacon, and slice up the onion and tomato so they’re ready to go by the time my burgers come off the grill. I even have a chance to make the Grilled Fries that I always serve alongside my burgers. No time wasted! 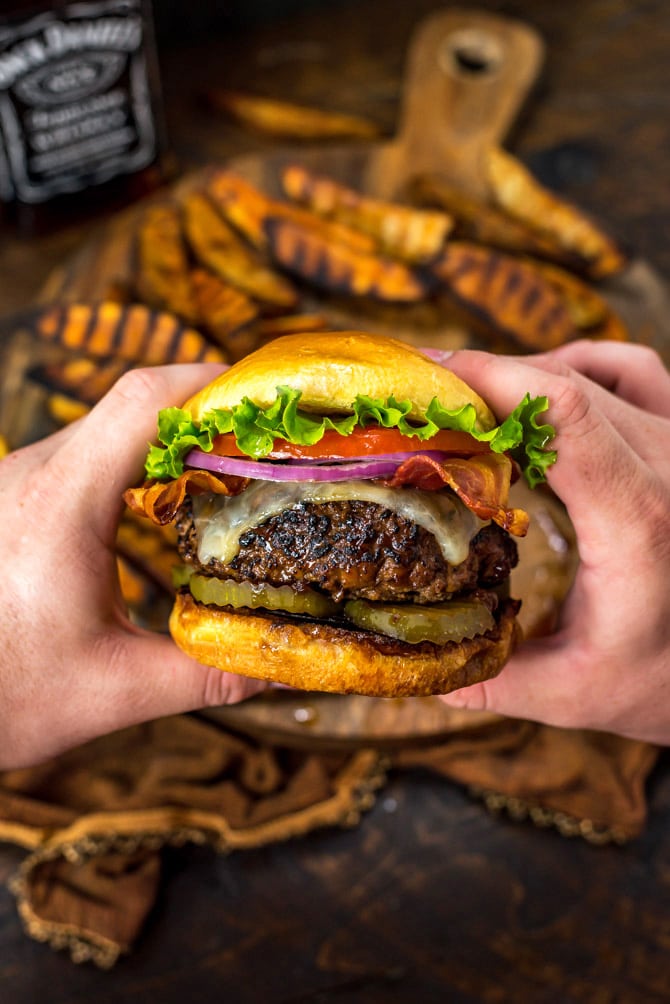 Except, of course, for all of that time in my life that I went without eating burgers. After taking one bite of a Jack Daniels burger for the first time, I finally understood what I’d been missing out on. I was hooked.

Some say I’ve been on a burger bender ever since.

Can you blame me? With juicy ground sirloin, flavorful Jack Daniels glaze, melted white cheddar cheese, perfectly crunchy bacon, lettuce, tomato, onions, pickles, and a grilled brioche bun, this burger has it all. It’s a game-changer.

Oh, and I wasn’t the only one who loved these burgers the first time I made them (and every time since then). James loved them. My family still requests them. And most importantly, there was one for Wesley. “Tastes just like the original,” he said. “Actually, it’s better.

“You know, I’m kind of obsessed with it.”

These delicious burgers taste almost exactly like the ones from TGI Friday’s, but– dare I say– even better. Even if you’re a beginner at the grill, I’ll walk you through every step for the most impressive burger you’ve ever made.

For the Jack Daniels Glaze:

For the Jack Daniels Glaze:

This recipe makes more glaze than necessary for the 6 burgers, but reserve the rest for later.