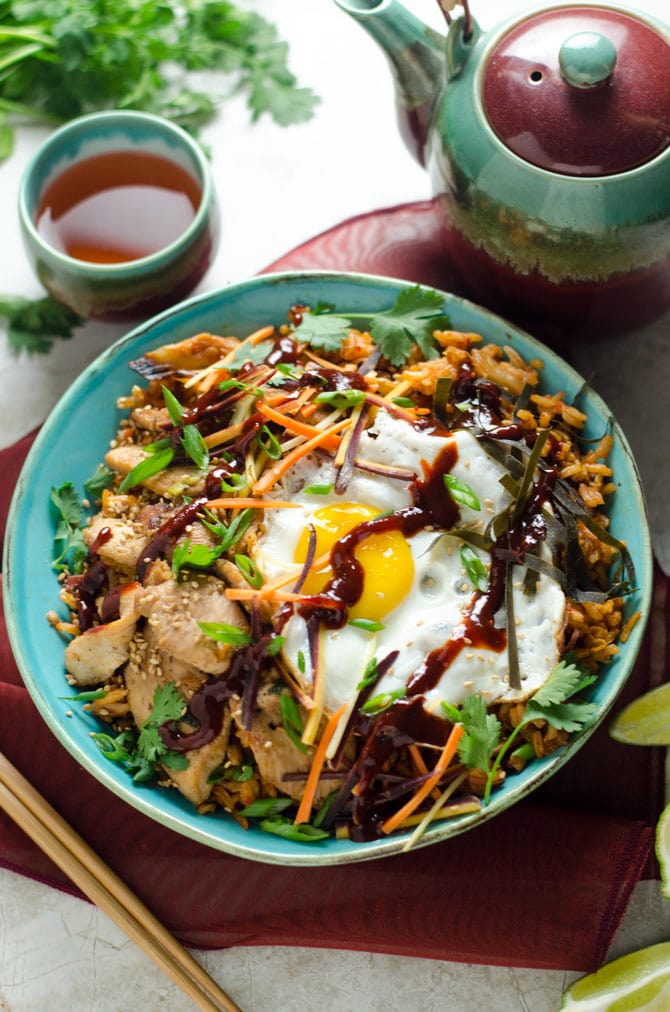 Can I just say (in-between mouthfuls) that I’m so happy no one can see me right now?  You know, as I intermittently shovel forkfuls of leftovers into my face, spill grains all over the keyboard of my laptop, and, since we’re being so candid, grunt like a hungry beast? Yes, I know that it’s not lady-like. It’s certainly not becoming. In fact, it’s barely even human, but these bowls warrant that sort of behavior.

You’ve got to understand two things before you judge me:

One, these Korean Chicken and Kimchi-Fried Rice Bowls are so sublime that I don’t even know how to start describing them. I could begin with the tender, garlic-ginger marinated chicken, but then there’s also the kimchi-fried rice, with its spicy-sour caramelized vegetables. AND AH! I can’t forget the sunny-side-up egg (drool), or all of the toppings (from carrots to dried seaweed ribbons to sliced scallions), or the drizzle of gochujang on top for extra kick. Will it suffice to say that every bite is perfect?

Every bite is perfect.

Two, like any self-respecting woman with a tupperware container of leftovers from last night’s Korean Chicken and Kimchi-Fried Rice Bowls, I had big plans for lunch today. Big, dreamy plans that should have begun about four hours ago. But just as I was about to dig in, I remembered that I had a doctor’s appointment and I needed to leave… like 10 minutes back-in-time. I’d skipped breakfast in preparation for my lunch, so I really was in for some stomach-struggle. 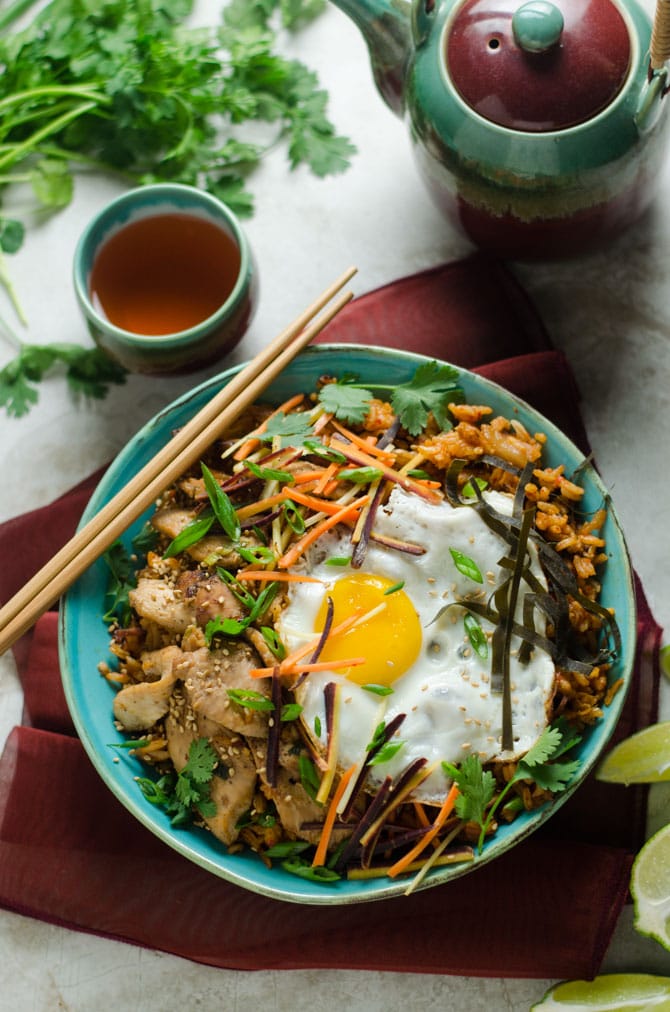 Of course, this doctor’s appointment was the sort that would work up an appetite, to boot. It required monitoring my heart rate while speed-walking on a (seriously) near-vertical treadmill. A treadmill which, if the nurse is to believed, was “manufactured in hell”. I love a good hike or treadmill session just as much as the next gal, but this was intense.

My mind was not on the test though, nor was it on the framed photo of a palm tree studded beach that hung just inches in front of my face. All I could think about was the spicy Korean feast that was waiting for me at home. My stomach moaned. Loudly. Embarrassingly. 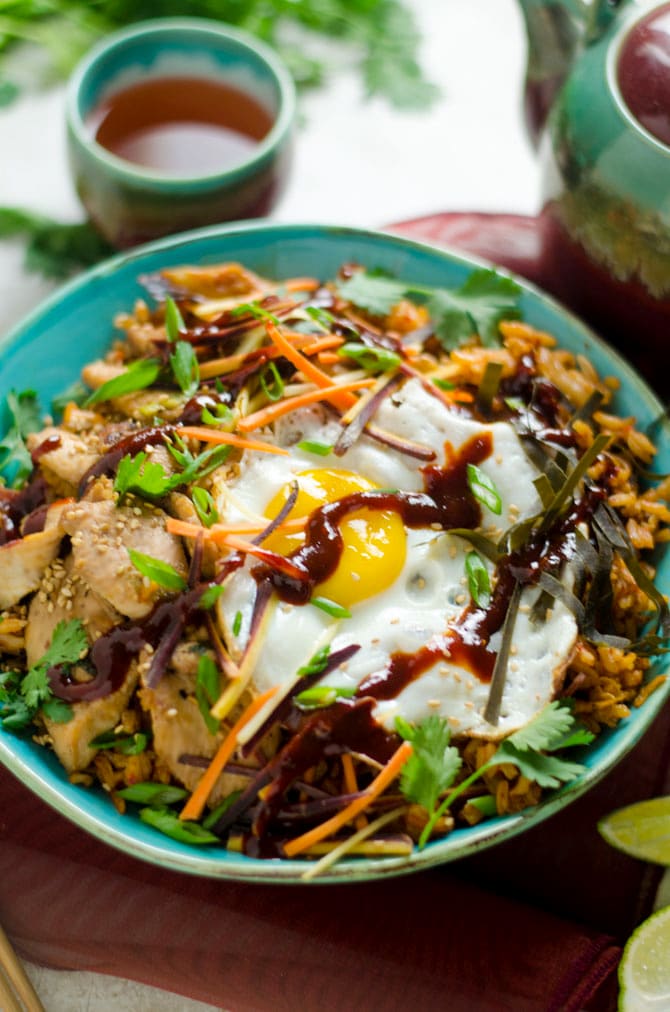 Once you’ve got a bowl like this on the brain, there’s no going back.

I know I briefly explained what we’ve got going on here earlier, but let me go into a bit more detail.

The idea for this bowl actually began after a late-night visit to a korean barbecue joint, where several tacos were happily consumed, piled high with kimchi. Kimchi, in case you’ve never had it, is a spicy, fermented mixture of napa cabbage and often some other veggies, such as carrots, and daikon radish. It’s tangy, hot, and very savory– it’s basically my dream condiment. I wondered to myself what it would taste like in fried rice.

As it turns out, that’s already a very common thing in Korea. It’s called kimchi bokkeumbap, and as I soon learned, it’s 10x more mouthwatering than even the biggest kimchi lover could imagine. Unlike other fried rices, this version incorporates a lot of liquid, resulting in a totally sauced (but not quite wet) rice that is huge on flavor. And even though it would be perfect by itself, I had to take it a step further and throw some protein on top. Two kinds, for good measure.

First, I decided to make an easy chicken marinade out of soy sauce, ginger, garlic, brown sugar, sesame oil, and scallions. This is really a basic Asian marinade that I use for a lot of my quick, on-a-whim dinners. I place thinly sliced chicken in it for about an hour while I get everything else together, and then I stir fry it until there’s no remaining pink on the chicken, and sprinkle some sesame seeds on top. It was great served over the spicy rice– not too much heat in every bite, but still a ton of taste.

I could have stopped there, but what good is fried rice without any egg? Since Kimchi-Fried Rice doesn’t typically mix in a scrambled egg like many other fried rice dishes, I decided to top mine with a sunny-side up egg instead. Gotta love when you break the yolk and it flows over the chili pepper seasoned rice. I wish I had another egg in here so that I could do it again. 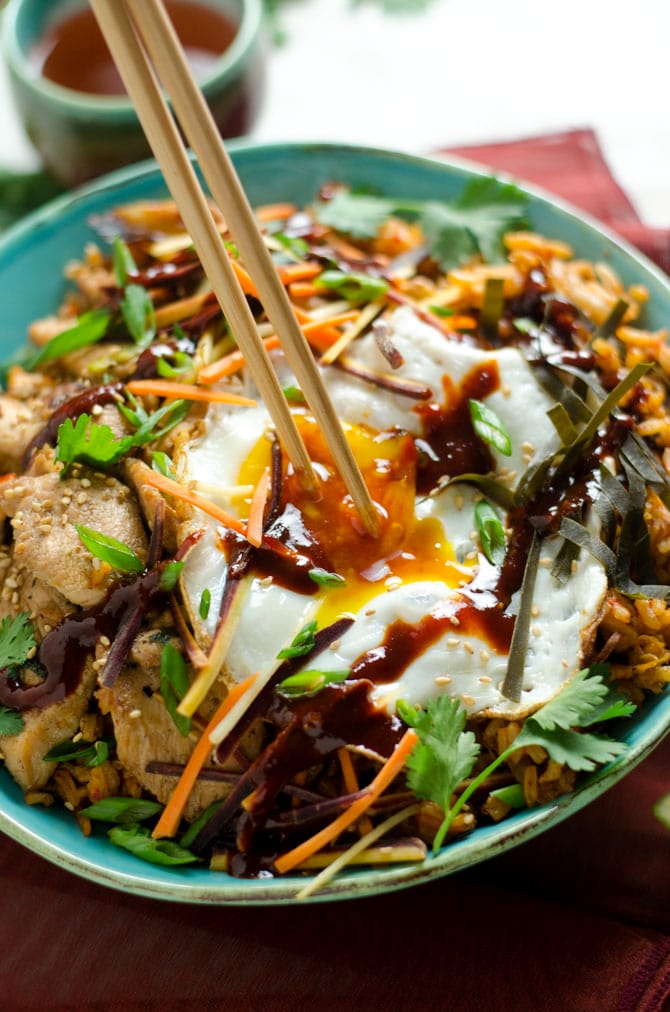 And though I’d totally chow down on this dish either way, it really wouldn’t be the same without the toppings. I cut some rainbow carrots into matchsticks and placed them on top for some crunch, and sliced up some dried seaweed for a little more savoriness. No bowl is complete without some green on top, so I chopped up a bit of scallion and cilantro to scatter atop. And lastly, of course, I added a drizzle of extra gochujang for more heat, because much like that treadmill I mentioned earlier, my taste-buds are from a land of perpetual fire.

Now can you blame me for inhaling my leftovers? I think not.

I bet you’ll be doing the same (if there even are any leftovers) when you give the recipe a go for yourself. Don’t forget to take a photo and tag #hostthetoast on Instagram so that it shows up in the new You Made It page that I’m OBSESSED WITH. Obsessed. Go fill it up, and enjoy your Korean-inspired dinner bowl!

For the Marinated Chicken:

« We Redecorated Around Here, What Do You Think?
Waffled French Onion Soup »