This No-Bake Mint Chocolate Zebra Cheesecake is just as delicious as it is hypnotically stunning. Be warned: It’s rich, chocolaty, spiked with plenty of mint, silky smooth, and a total ruiner of self-control. 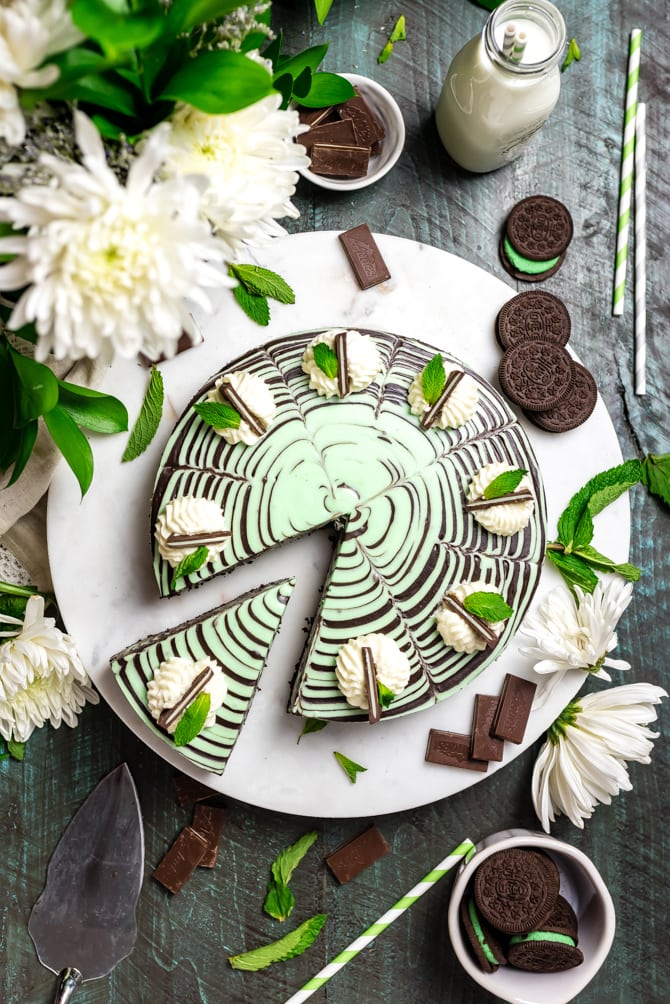 This one goes out to all my fellow mint chocolate chip ice cream lovers, thin mint fanatics, and shamrock shake drinkers.

It’s the ultimate MC (that’s mint chocolate) dessert. Yes, you can quote me on that. The base is made of crushed mint oreos and melted butter, and the creamy filling from alternating layers of mint and chocolate cheesecake batters. Despite the fact that it’s no-bake –which means it takes less time and is practically fool-proof– it’s impressively flavorful and just as nice to look at.

I mean, really, look at that. I don’t want to pat myself on the back too much here but I basically ran around the house for the whole day after making this No-Bake Mint Chocolate Zebra Cheesecake repeating some version of “I’m so happy with this cheesecake” ad nauseam, so there’s not much modesty left to protect here. I’m proud. I said it. 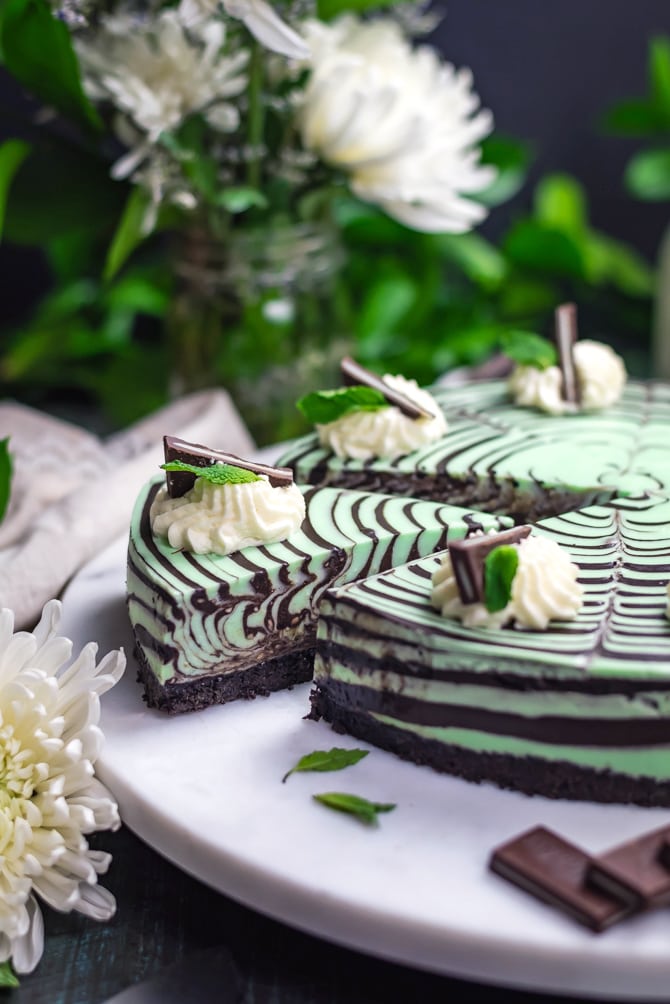 The first step in making a good cheesecake (or pie of any sort) is nailing the crust. Sometimes that means making a dough from scratch, chilling it, rolling it out, fitting it, crimping it, and baking it. (In other words, sometimes, it’s a lot of work!) But that’s not the case here.

For this recipe, we don’t even have to bake the crust. All we have to do is throw some whole oreos in the food processor, add in melted butter, press that mixture into a greased or nonstick 9-inch springform pan, and chill until solid while we take care of the filling. If you don’t have a food processor, you can always put the oreos into a large plastic sealable bag and then smash them up with something sturdy like a rolling pin or can.

The great thing about using whole oreos is that the flavor of the sandwich cream winds up in the crust, and it also aids in holding everything together. You don’t have to worry about your crust crumbling apart, which is usually a big worry of mine when making no-bake cheesecakes!

Personally, I like to use the mint oreos for this recipe because it adds– surprise, surprise– more mint flavor. However, regular oreos will also work fine. Just keep in mind, you may need to increase the amount of mint extract in the recipe if you decide to go that route. 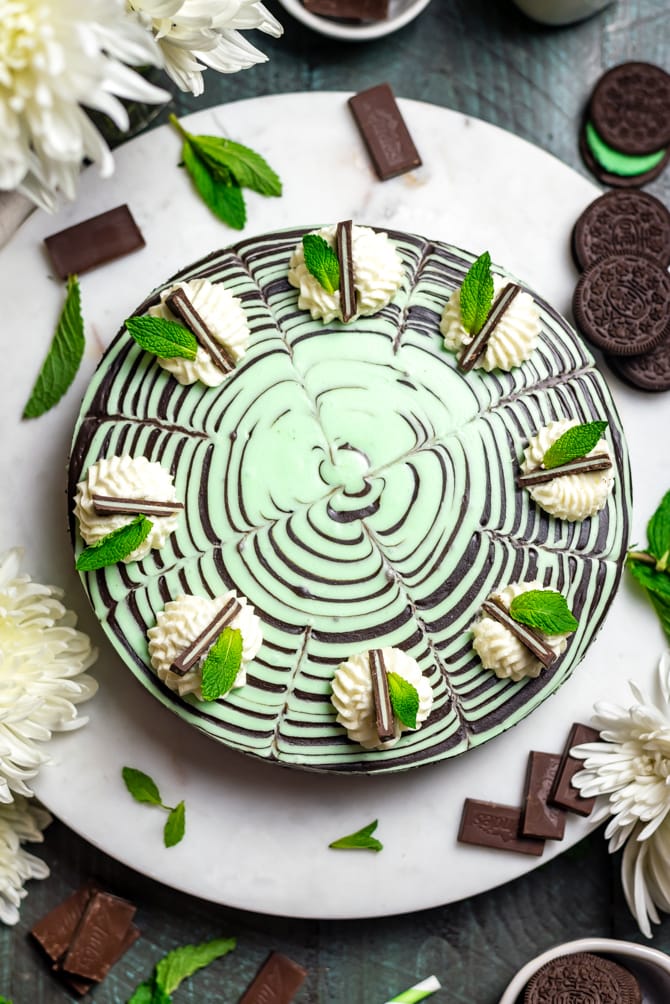 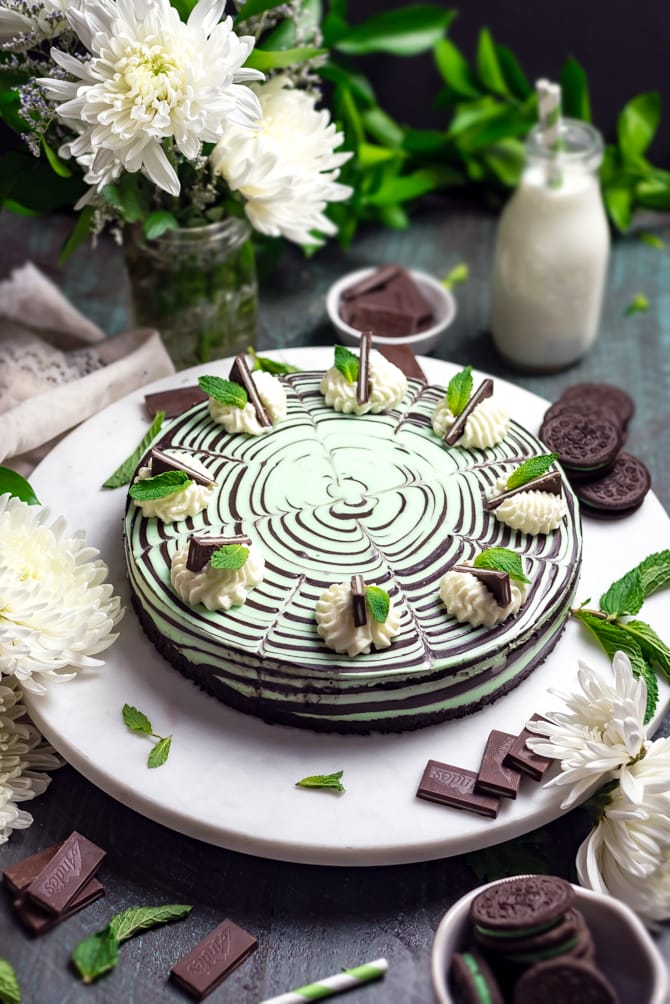 HOW TO MAKE A NO-BAKE CHEESECAKE FILLING

If you’re a little hesitant about the idea of a no-bake cheesecake, I don’t blame you. It seems a little weird to make a dessert that doesn’t ever see the inside of an oven, right? However, no-bake cheesecakes are exponentially easier to make— you don’t have to worry about all of the things that could go wrong with a baked cheesecake. That’s right, no more stressing about whether or not you’re beating the batter too much, or if you’ve baked the cheesecake long enough yet, or if the cheesecake will wind up with a big ol’ crack down the middle.

Instead, what you wind up with is a smooth, silky, light but velvety-textured cheesecake filling every time. 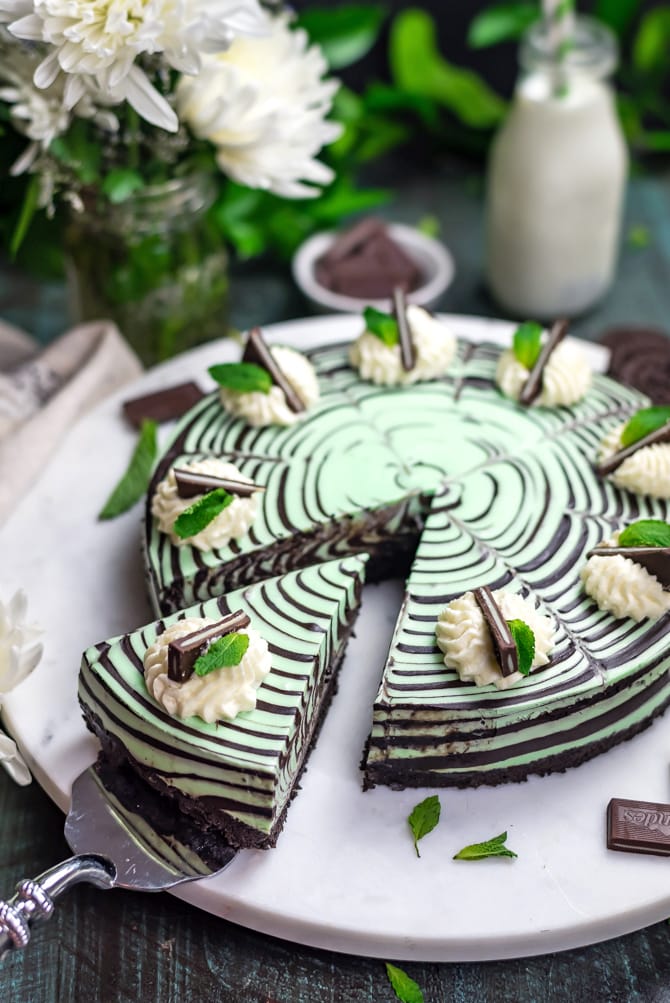 So how do you make it? Well, pretty similarly to how you normally make any other cheesecake. No-bake cheesecake fillings typically use most of the same ingredients as their baked counterparts, but they don’t use eggs to bind them. Instead, many recipes rely on cream, whipped to stiff peaks, to keep everything thick and allow it to set in the fridge. In my experience, gelatin provides a superior hold, so you don’t have to worry about your cheesecake being runny or starting to weep at room temperature.

Simply sprinkle the gelatin over cold water to dissolve it, then microwave for about 30 seconds, or until fully melted. Then you can add it along with the rest of the cheesecake filling ingredients and it will work its magic as it sits in the refrigerator! 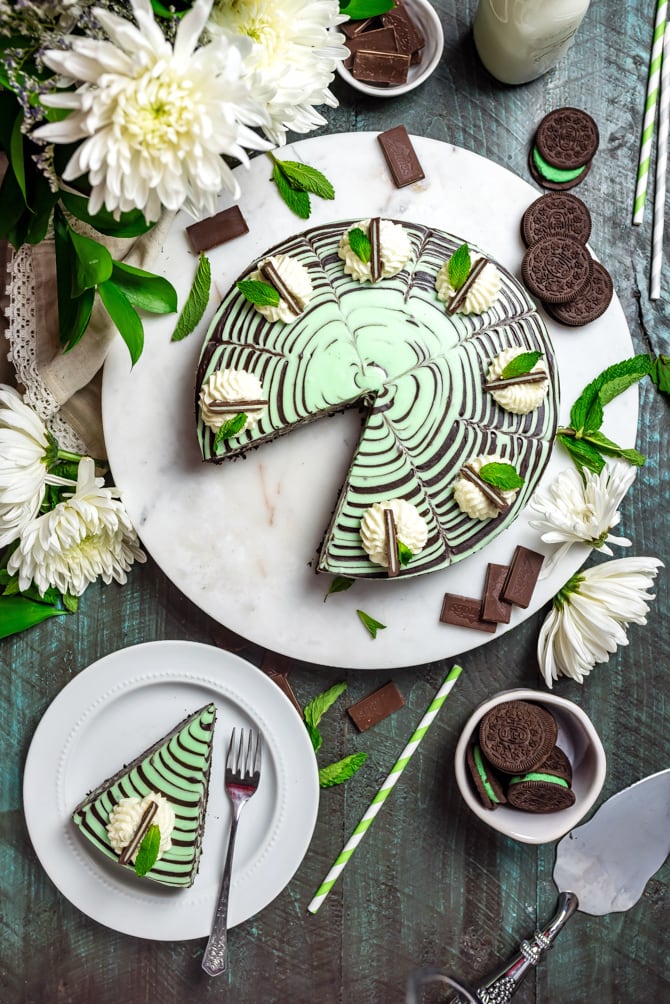 HOW TO MAKE ZEBRA PATTERNED CHEESECAKE

This type of cheesecake is often called a “Zebra Cheesecake” due to the striped appearance of its slices. The zebra look is an effect that may seem difficult, but is actually incredibly simple to pull off.

First, divide your cheesecake batter into two separate bowls. Whisk dark cocoa powder into one of the bowls until well-combined for the chocolate / deep brown layer. Then, add mint extract and food coloring to the other bowl and whisk for the mint / green layer of your No-Bake Mint Chocolate Zebra Cheesecake.

Then, grab your ice cream scoops. Yes, I said scoops! I like to use two separate ice cream scoops for this so there’s no cross-contamination (or no need to clean between every scoop) but if you only have one, you can use ladles or spoons instead. Anyway, grab ’em, and spoon the batter into the center of the chilled crust, one spoonful at a time, alternating between the green batter and the brown batter. Put the spoonful of batter in the center every time, and it will push the previous batter outward to create rings of color and flavor. It will take a while, but eventually the whole pan will be full and all of the batter used up.

At that point, you can leave the design as-is, or you can use a skewer or toothpick to swirl the very top of the batter for a different design. I chose to draw lines in mine which helped mark where to cut even slices (and also sort of made the center look like a four leaf clover)! 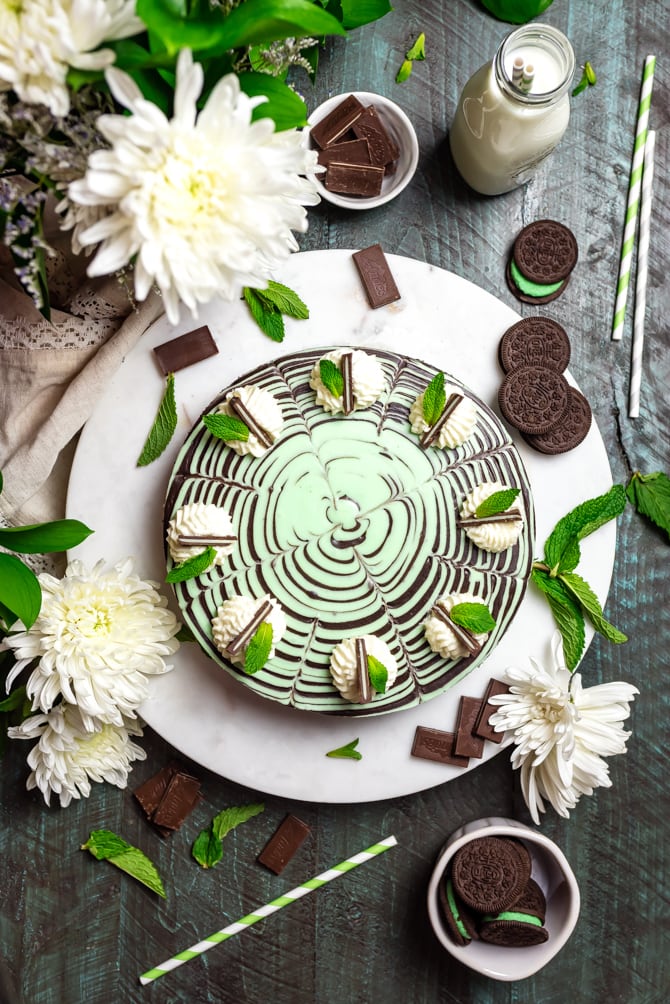 For the No-Bake Oreo Crust:

It’s very important that the cream cheese isn’t cold, or it will cause clumping. If your mixtures do clump or if it’s too thick to spread, don’t worry. Microwave the mixtures briefly until just slightly warm (not hot!) and then continue to mix. The clumps will liquify and the resulting batter will be thin enough to work with!