This post is sponsored by Sutter Home, who inspired James and I to have a delicious date night for the #SweetOnSpice campaign. Cheers to that! 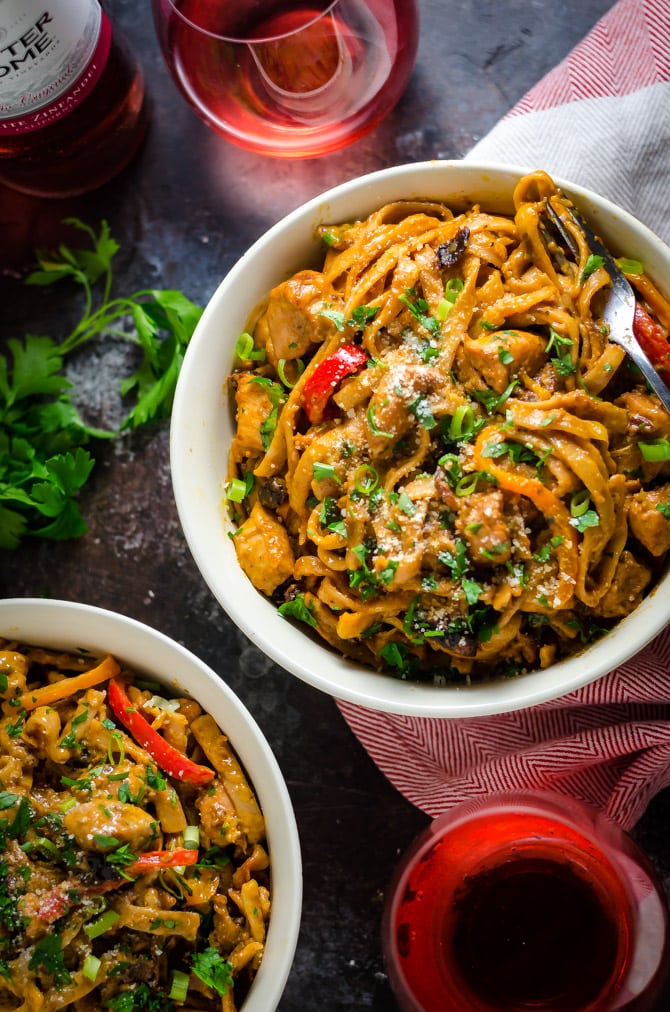 I can’t think of a single dish that I’ve made over the past year and a half that James and I have been living together that he didn’t taste. He’s as supportive and well-fed as you’d expect any boyfriend of a food blogger would be, but his dinners are probably– okay, definitely– less charming than people would imagine.

If I’m being honest, his meals are almost always cold from a hour’s worth of shooting pictures while trying to perfect my angles and grumbling over lighting. Our eating area is usually littered with sauce-streaked bowls that I kept switching out because I liked this one better for plating– oh no, maybe that one. There’s a cutting board with a pile of parsley on the table because I wasn’t sure just how much I’d need and kept running back for more. I somehow wind up with sauce on my elbow and the back of my shirt. It’s 11PM. I’m asking him if he really loves the recipe after each bite. “No, really, is there anything you’d change?”

Now all of my secrets are out. 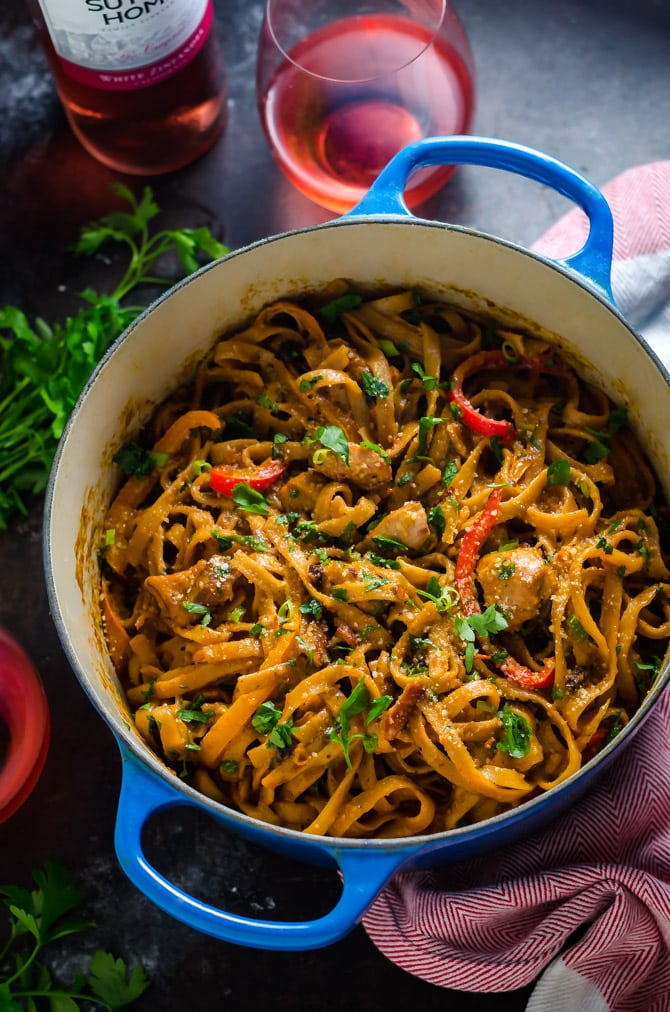 So yes, I cook and he eats, but I rarely have the opportunity to actually cook for James. A dish made especially for him, served warm, with no mess. And when I realized that this week, I decided to make a recipe without taking pictures, something I knew James would really love.

I call it One Pot Cajun Chicken Alfredo. 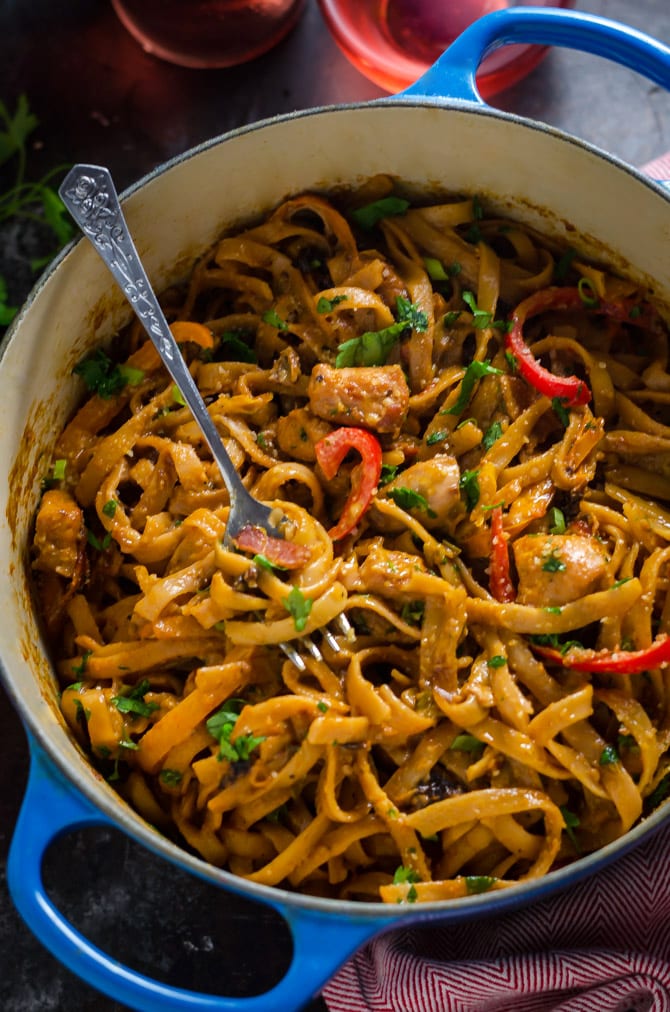 Perhaps it seems strange that I’d pick something so straightforward as a special dinner for him, but that’s exactly what makes this One Pot Cajun Chicken Alfredo perfect. It’s low fuss– I could whip it together in time to eat right when he got home from work. There’s no mess for us to stress over, or to rush through eating to take care of– it’s literally all make in one pot. There’s no need for me to run around to 12 grocery stores to find some exotic component– I keep most of the ingredients on hand. And there’s something inherently sexy about a saucy pasta, even in its simplicity.

Not to mention, it goes wonderfully with a crisp and sweet wine like Sutter Home White Zinfandel to cut through the spice and richness. You always get extra brownie points for pairing wine with dinner, you know. 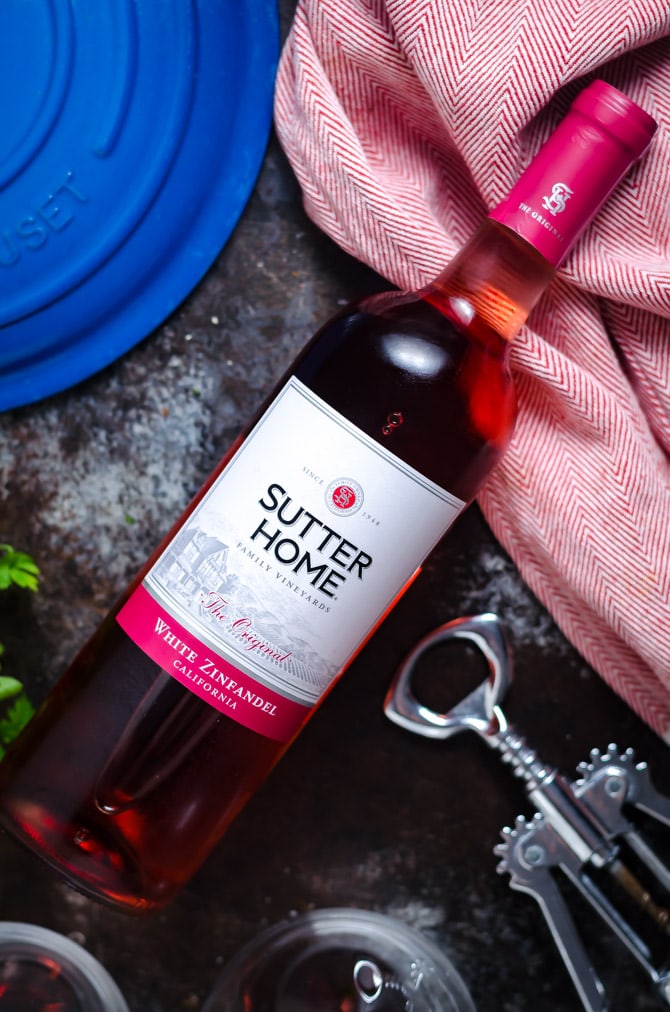 By the way, this Sutter Home White Zinfandel doesn’t just pair well with Cajun spices– anything with some heat, from Asian stir-fries to Mexican enchiladas will work wonderfully. The melon and strawberry notes give an especially great contrast to these sorts of dishes in the summertime, when you want to eat food with bold flavors but still want to feel refreshed.

In fact, beyond spicy foods, White Zinfandel is great to keep on hand for any time you’re entertaining or throwing together a date night dish because it’s actually an incredibly versatile wine. Beyond creamy pastas and spicy foods, I’d especially recommend it with seafood, fruity desserts, or pork– especially smoky pork like bacon, which is exactly why I included some in this recipe right here. 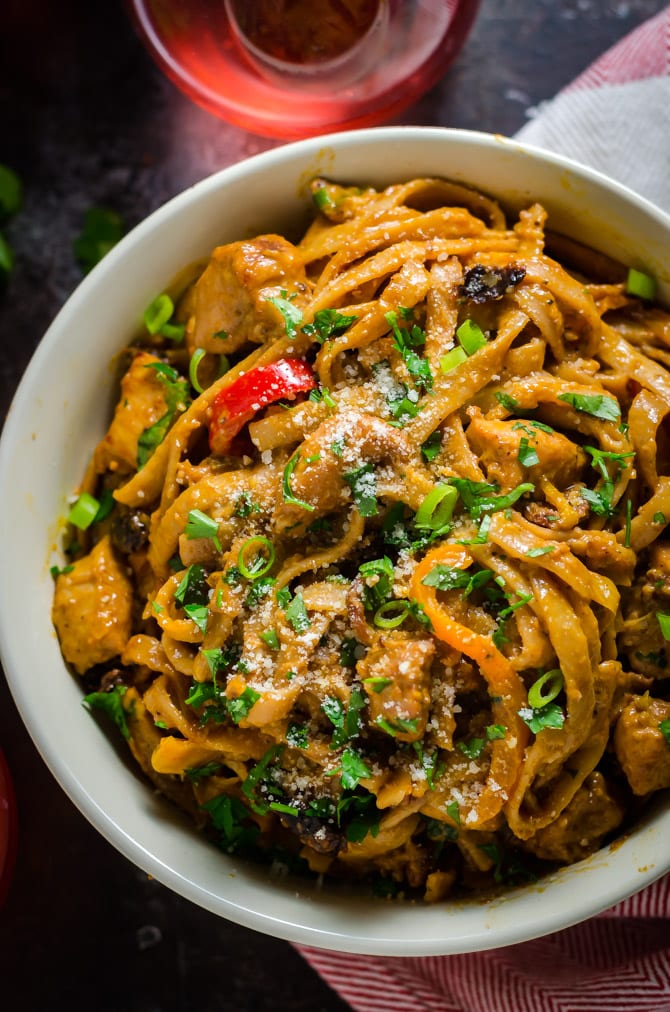 Oh, did I forget to mention that? Because yes, in this one pot recipe, there’s bacon. And that’s in addition to the pasta, chicken, garlic, bell pepper, sun-dried tomato, and cajun-spiced alfredo sauce that all comes together in one pot without having to ever take anything back out! You just add the ingredients as you go until everything is perfectly cooked, and it will seem like you put out a heck of a lot more effort to do it.

No one has to know just how easy it was. I’ll keep your secret if you keep mine.

And if you’re wondering how there are photos in this post when I specifically said I’d make a recipe without taking pictures, that’s because James told me that this pasta was so “crazy good” that I had to make it again to put it on the blog (and so that he could of course eat a few more bowlfuls).

… I was planning to do that all along, but by all means, let’s go with “I did this selflessly, all for him.”

In all seriousness, though, sometimes it is hard to find the inspiration, the time, and the energy to do even a small special gesture for the people you love. That’s why I wanted to share this dish with you, because the One Pot Cajun Chicken Alfredo makes it so easy, even if you’re not fully confident in your cooking skills yet. Trust me when I say your efforts will be rewarded with plenty of praise and most likely some kisses. I got a back rub as a thank you, so if that’s not proof that this recipe is a winner, I don’t know what is. 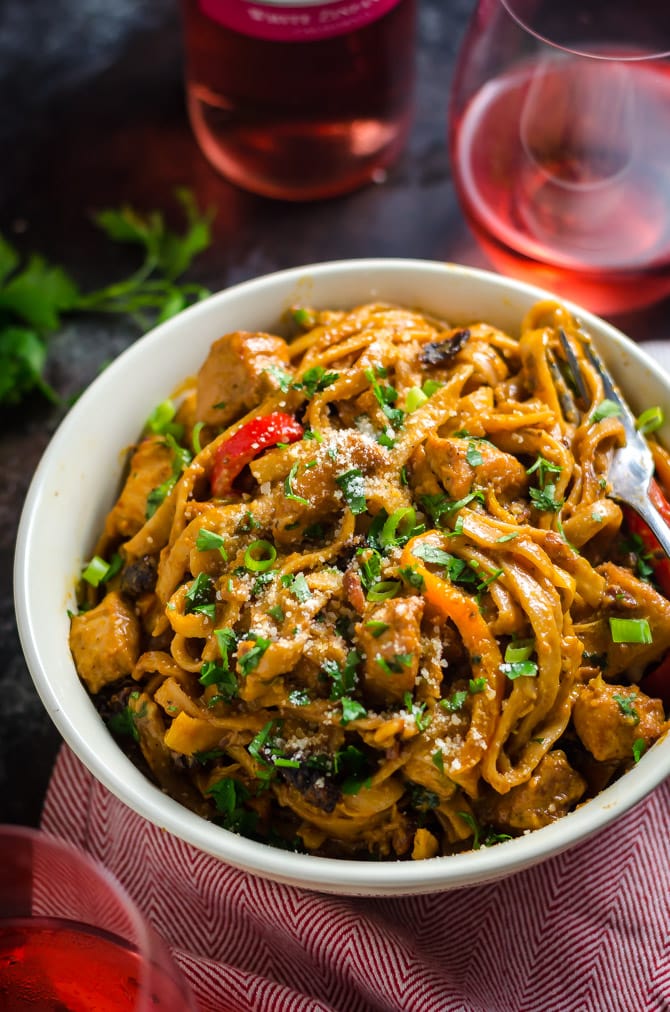 This post was compensated by Sutter Home. All thoughts are my own.