Spicy, Crispy Orange Beef is a Chinese takeout classic featuring thin slices of crisp sirloin steak that are tossed in a spicy, sweet, and savory orange sauce. You can make it at home in less time than it takes to get delivery. (And it’ll taste better, too!) 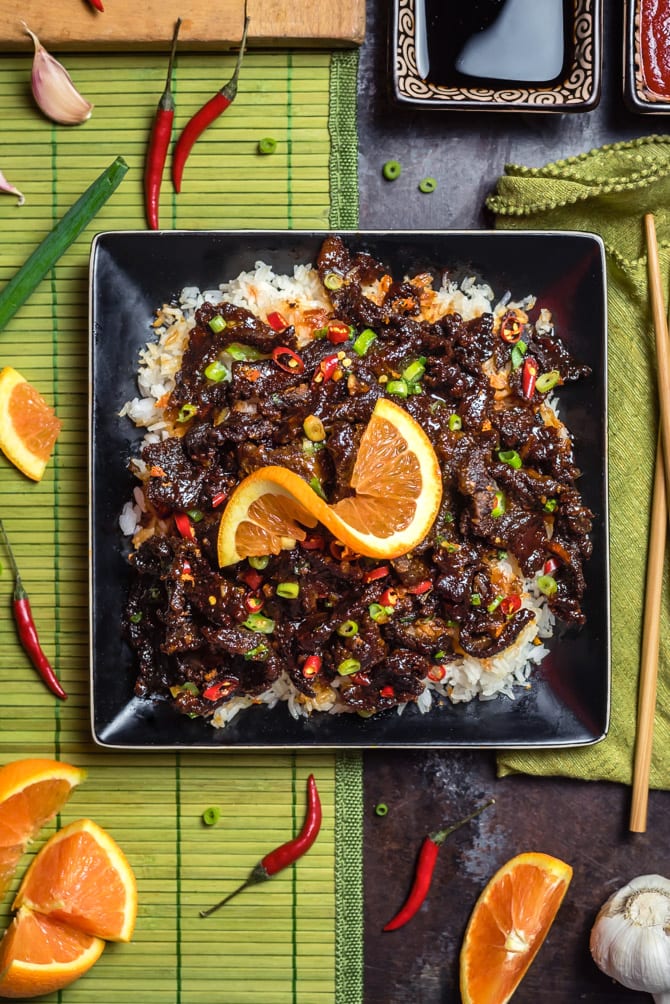 While I’m not Chinese myself, my Grandma Sandy (my mom’s stepmother) and my uncles are, and for my whole life they’ve made and brought all sorts of dishes for us to enjoy every holiday. Chinese food has been ingrained into every family celebration since I can remember. 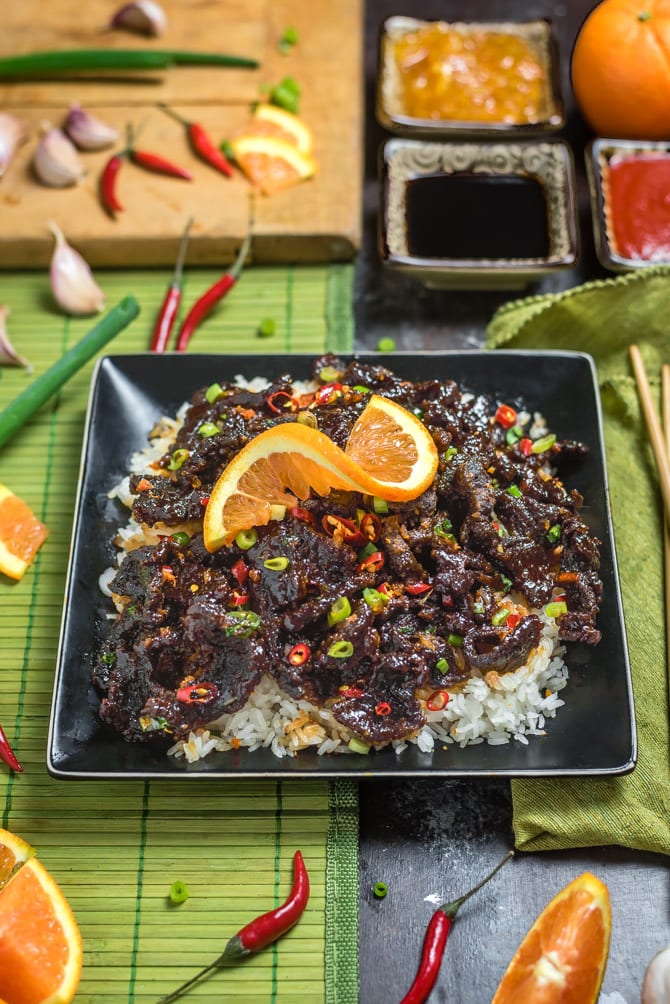 But my Aunt Xiaoping and Uncle Steven, who are hosting this party, are from my dad’s side of my family. Xiaoping and Steven got married a few years ago after she immigrated from a different region of China than my grandma is from, which means she makes different dishes for her celebrations. To say that I’m pumped to try and to learn about all of the new-to-me foods would be a slight understatement. I’ve been obsessing over it ever since they extended the invitations.

Here’s the thing about obsessively thinking about Chinese food, though: You’re going to wind up with cravings. You’re going to see dumplings in your dreams and egg rolls when you plan dinner. And while, like I said, I love authentic Chinese food, somehow a craving has snuck in for a Chinese dish that’s not very authentic at all: Spicy, Crispy, Orange Beef. 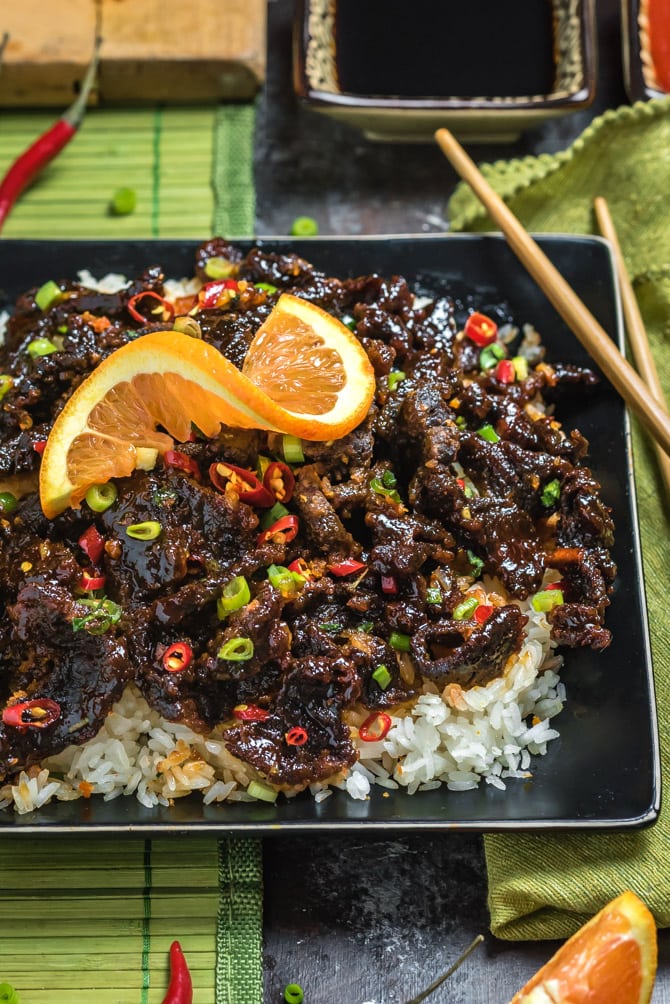 THE HISTORY OF ORANGE BEEF

Like I mentioned earlier, different regions of China have different types of food– vastly different, actually, in many circumstances. Orange beef, with its hot-and-spicy flavor, is commonly associated with Hunan cuisine, but actually it’s an example of Americanized Chinese food.

The history of Americanized Chinese food is rich and fascinating, and more detailed than I could do justice in a short blog post (or even a long one). Instead, I can’t recommend the documentary The Search for General Tso enough if you’re interested in learning about the evolution of food and immigrant culture in the United States. But since you’re here already, I’ll go through a quick and very condensed overview in the mean time.

In the 1800s, gold rush rumors spread not only across America, but also to South Chinese merchants who quickly immigrated to the United States to provide services for the miners and workers around the San Francisco Bay. Over time, many more immigrants followed, and with the influx of Chinese and the dwindling of gold also came a growing anti-Chinese sentiment. Racism-fueled-laws, a language barrier, and cultural differences made it difficult, if not impossible, for most Chinese immigrants to find good job opportunities. As a result, many Chinese immigrants became small business owners to make a living, many of which opened restaurants to serve food to the booming Chinese migrant population who craved the foods they left behind in China.

Over time, these restaurants gained popularity and spread, and restaurant owners realized that they could find more success outside of the Chinese-American population by changing their dishes to suit broader American tastes. At that point, they began creating much sweeter, boneless, often fried versions of their classic recipes. By the 1970s, Americanized Chinese food became extremely popular in New York City, where master chef T.T. Wang of Hunan Restaurant on Second Avenue first introduced crispy orange-flavored beef.

Since then, both orange beef and orange chicken have become extremely popular (and often times, much sweeter) takeout options. 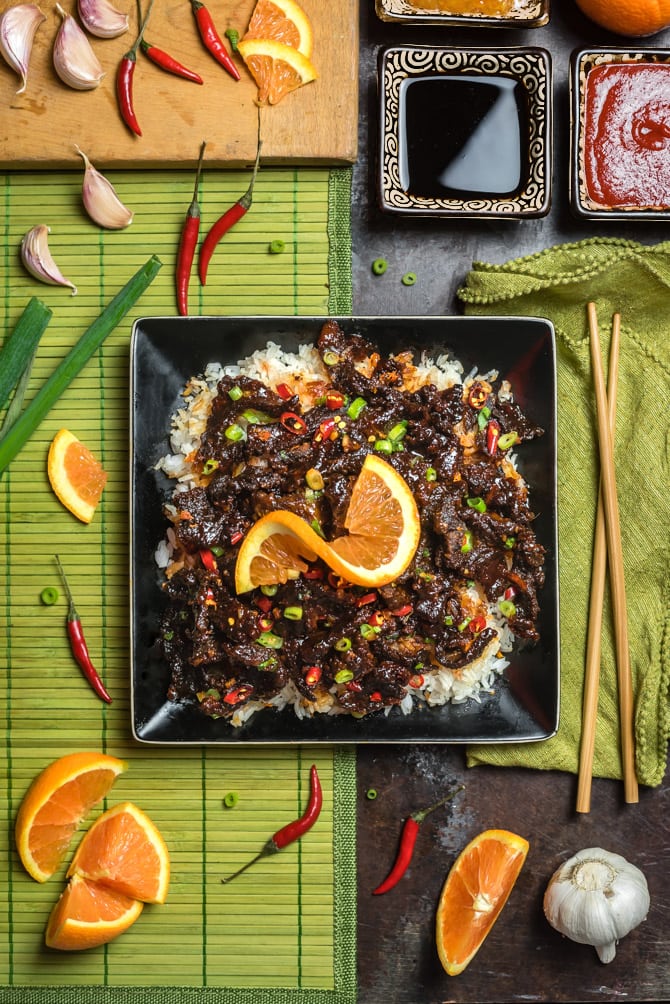 WHAT IS SPICY, CRISPY, ORANGE BEEF?

So now we know where orange beef came from, but the question still remains– what exactly is it? The dish typically consists of thin slices of beef or beef cubes, which are fried until crisp on the outside and tender on the inside, and then tossed in a sweet, spicy, sticky, and savory orange-based sauce.

To make this recipe, I thinly slice sirloin steak and toss it in cornstarch and salt. The salt seasons the beef, while the cornstarch gently coats the beef. While frying in oil, the cornstarch helps to form a crisp exterior on the beef while sealing in the juices for a more velvety-textured final product. 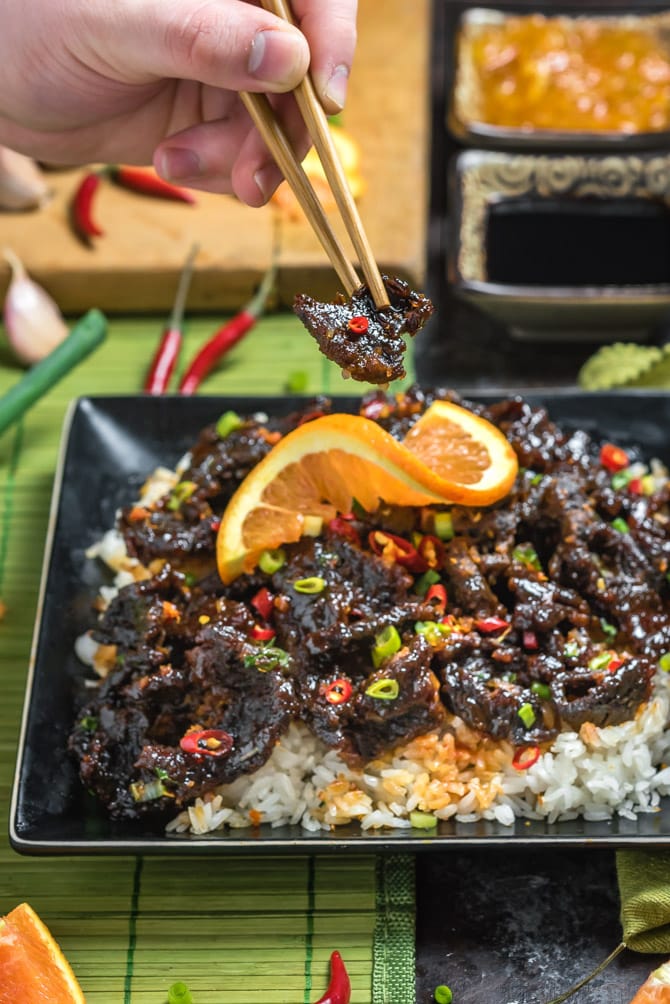 After cooking the beef, I remove it (and most of the oil) from the pan, and then I add in the garlic and ginger briefly before pouring in my sauce mixture. The sauce is comprised of orange juice, orange marmalade, seasoned rice wine vinegar, soy sauce, sriracha, and brown sugar. After boiling and thickening, it’s very sweet but also spicy and deeply flavorful. All that’s left to do is mix back in the beef and serve it over rice with some green onions, red chilis, and orange zest to serve.

(Side note: James learned to use chopsticks just so I could take that picture. Just in time for this weekend!)

This dish is great for Chinese New Year, or any day when you want to swap out your takeout for a tastier, at-home version that is sure to impress!