HEY!  There are better pictures, PLUS the recipe you’re looking for, PLUS a recipe for Olive Oil Herb Dip to go with your Rosemary Olive Oil Crock Pot Bread HERE! 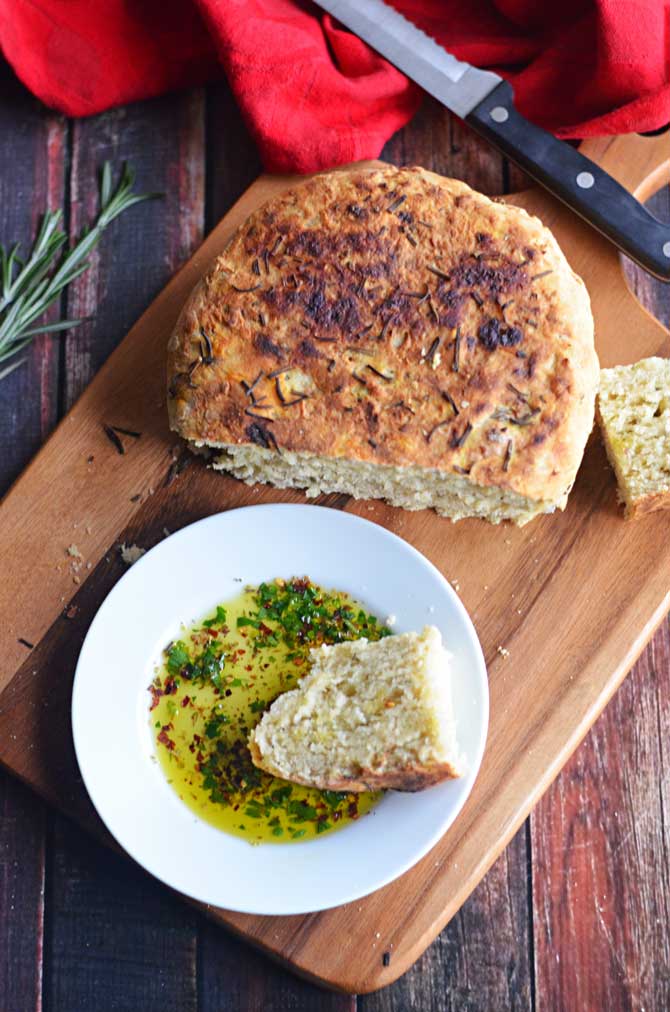 *Sample photo from the new post– go check it out!*

Ah, I see you’ve decided to just scroll down anyway instead of viewing the new post.  So be it, you rebel, you!

It was a typical day – lost in the open sea of Pinterest pins, drifting farther and farther from reality and any notion of passing time – when something caught my eye. That something, my friends, was Crock Pot Rosemary Olive Oil Bread. Just like the kind from Romano’s Macaroni Grill, this bread featured tons of the fresh herb, a deliciously golden crust, and moisture and flavor from the olive oil that brings it to a whole ‘nother level of delicious. 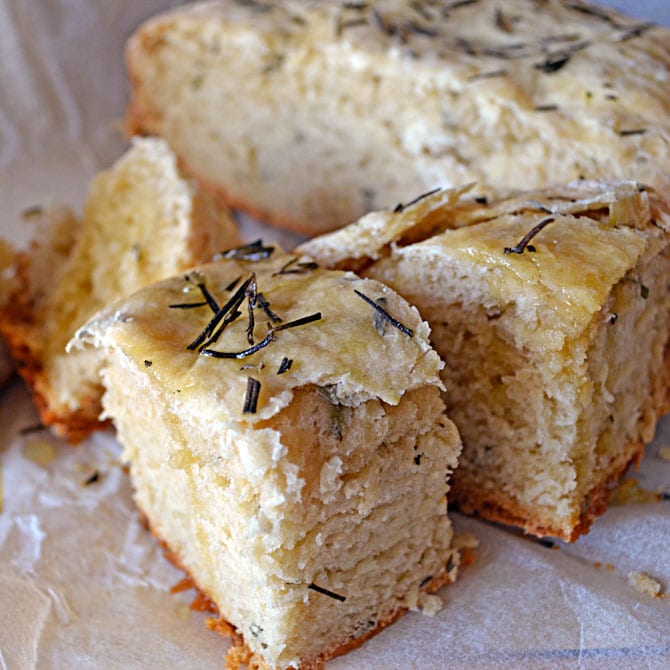 The main reason I was excited, though, was because this bread was supposed to be made in the crock pot. This is especially useful around this time of year when we are trying not to turn on the oven for any reason (we’re getting into 90 degree territory up here now). The crock pot won’t warm up your house like an oven will, but you can still have flavorful, fresh artisan bread at the end of the day to pair with your meals, with wine and cheese, or to enjoy by itself.  If you’re a bread fanatic– a carb connoisseur, one might say– like me, you understand why I was so excited. 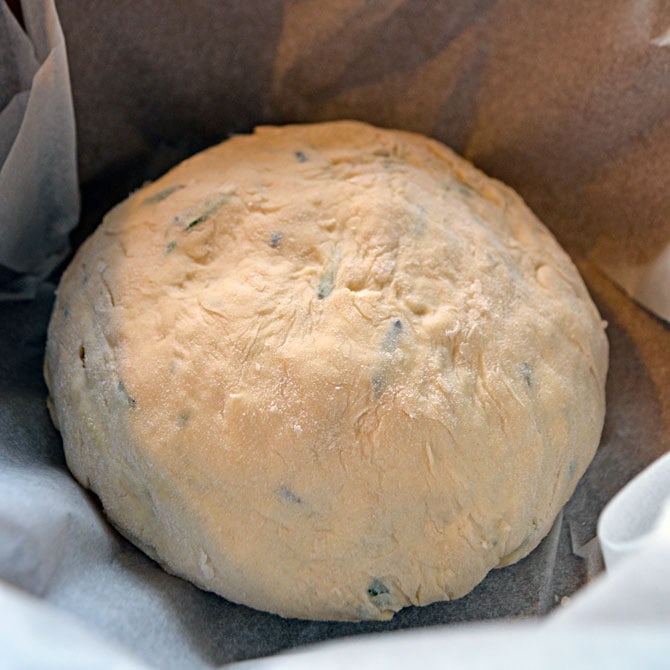 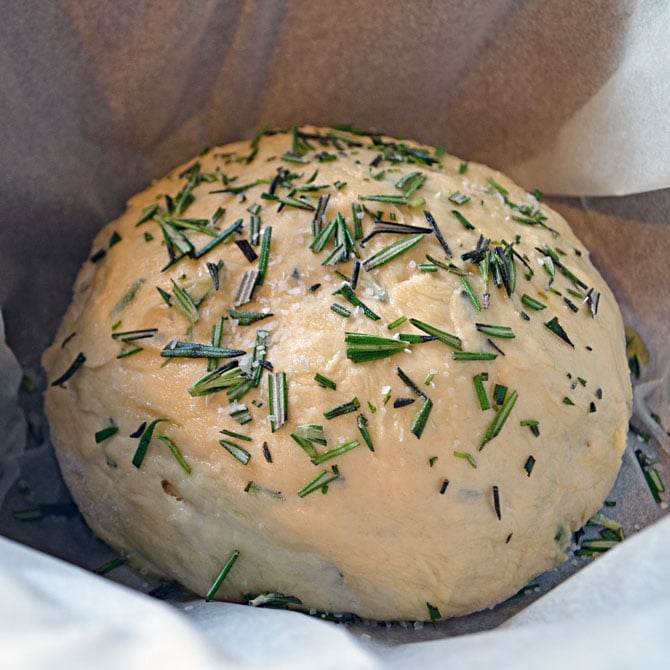 But when I clicked through to the recipe, the directions weren’t for the crock pot. In fact, the only place anyone mentioned the crock pot was in the comments. Le sigh. The bread still sounded amazing, of course, but I had been fooled by a pinner who just decided to tack on “Crock Pot” for one reason or another. Instead of sulking, I decided to try my hand at making my own Rosemary Olive Oil Crock Pot Bread. 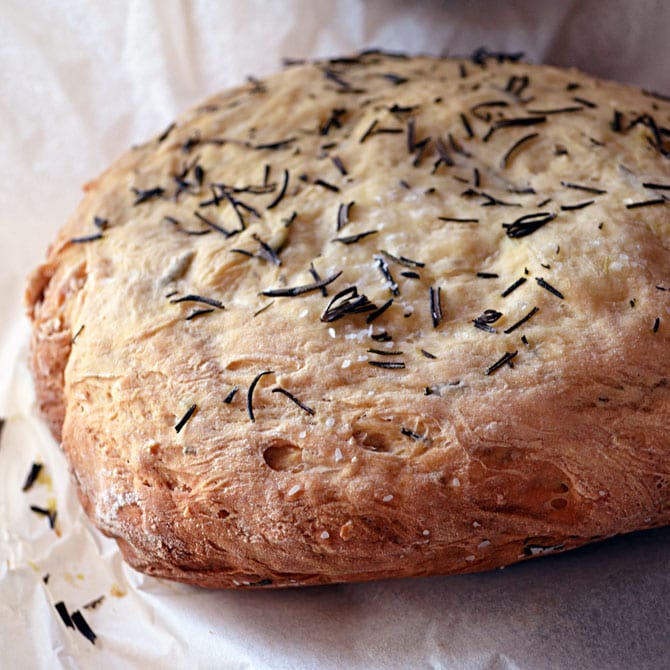 What I wound up with was a flavorful, enjoyable loaf with a crispy crust and a super soft inside. I served it to my family with dinner and the bread was gone in a matter of minutes. Granted, I may or may not have eaten half (or more) myself… We don’t judge here. Then I made another and tweaked a few things, and it was even better. Unfortunately, I didn’t take pictures that time, so let me just tell you that the recipe I’m giving produces bread that is slightly less dense inside than the pictures appear, but even softer and more delicious. It’s a minor but change but one you’ll appreciate, I’m not deceiving you. Promise. 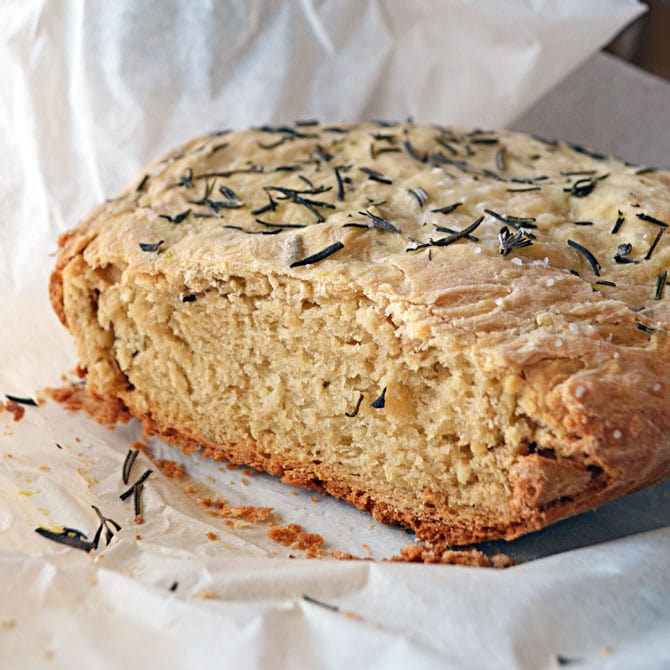 This is a great anytime loaf of bread, it doesn’t require a stand mixer, and you don’t have to heat your house or use up oven space while you prepare dinner (except for an optional 3-5 minute trip under the broiler to darken up the crust, but trust me, that short time isn’t going to heat up the house). Does it get any better than that? You can take your time to answer… in the mean time, I’m just gonna throw together another loaf.

This Rosemary Olive Oil Crock Pot Bread has the same flavors as the Macaroni Grill favorite, but is made in the Crock Pot so you don’t have to heat up the whole house. Best of all, it’s extremely easy to make, and you don’t even need a stand mixer!