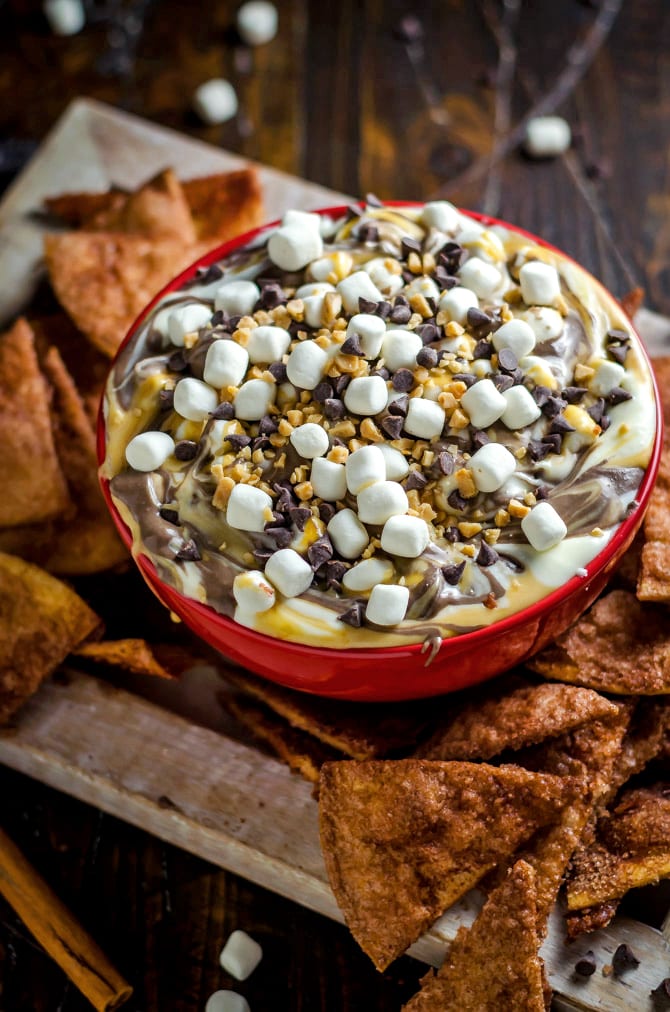 Hold on to your sweet tooth, because this dip is all dressed up and ready to party.

James– being the resident dessert-fiend-in-chief that he is– has been asking me to make something sugary for, gosh, probably two months now. But since I’m selfish and prefer salty foods usually inspired by more savory ideas, I just finally got around to it. So sorry for the wait, all of you who are also forever chasing the sugar rush. I promise this one was worth it. 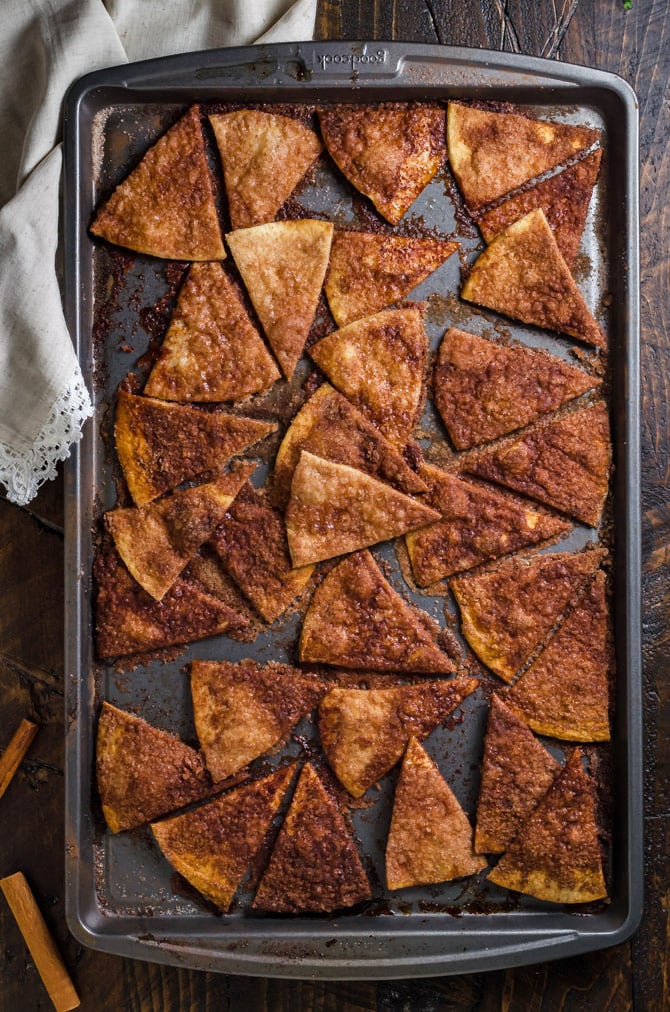 At least when I say I made a dessert recipe, I mean I really pledged allegiance to the sweet by making Salted Caramel S’more Dip with Cinnamon Sugar Chips. That’s right, a sweet dip and sweet dippers. As I once overheard in a war film, “Anything in life worth doing is worth overdoing. Moderation is for cowards.”

However, if you want to tone it down a bit, feel free to serve the dip with fruit or graham crackers as well. But don’t omit the cinnamon sugar chips altogether. Someone will devour them. Heck, you’re welcome to send them over here– James would be eternally grateful.

Speaking of the chips, here’s how easy they are to make: all you have to do is brush a few flour tortillas with melted butter, sprinkle them with cinnamon and sugar, cut them into wedges, and bake them until they’re crispy. Even without any dip at all, they’re an amazing snack, especially for the small amount of effort required!

They’d be killer with some fruit salsa or ice cream, too. 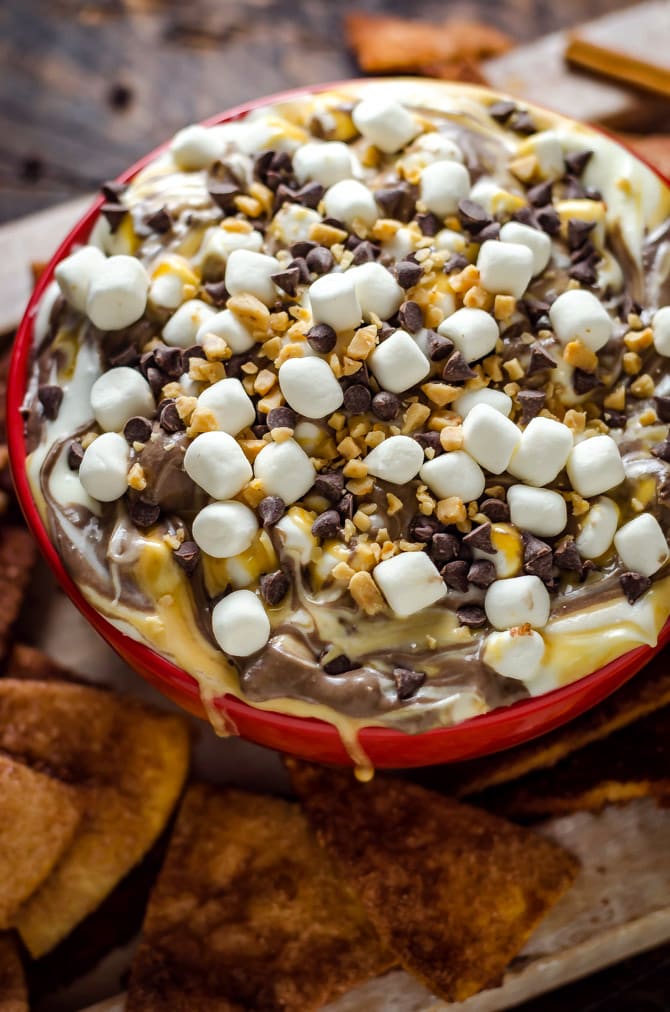 But of course the real star of the show is the dip. Cream cheese and marshmallow creme (also called marshmallow fluff) form the base, which I then divide into three separate portions to do my mix-ins. Mini marshmallows join in the plain marshmallow portion, cocoa powder goes in one portion for a kiss of chocolate, and caramel ice cream topping + kosher salt mix in the last portion. All swirled together, it’s a dip that’s just as delicious as it is pretty.

And as if that wasn’t enough, I like to top mine with mini marshmallows, mini chocolate chips, and toffee pieces for extra pizzazz. Sure, we’re gilding the lily here, but like the man said, moderation is for cowards. 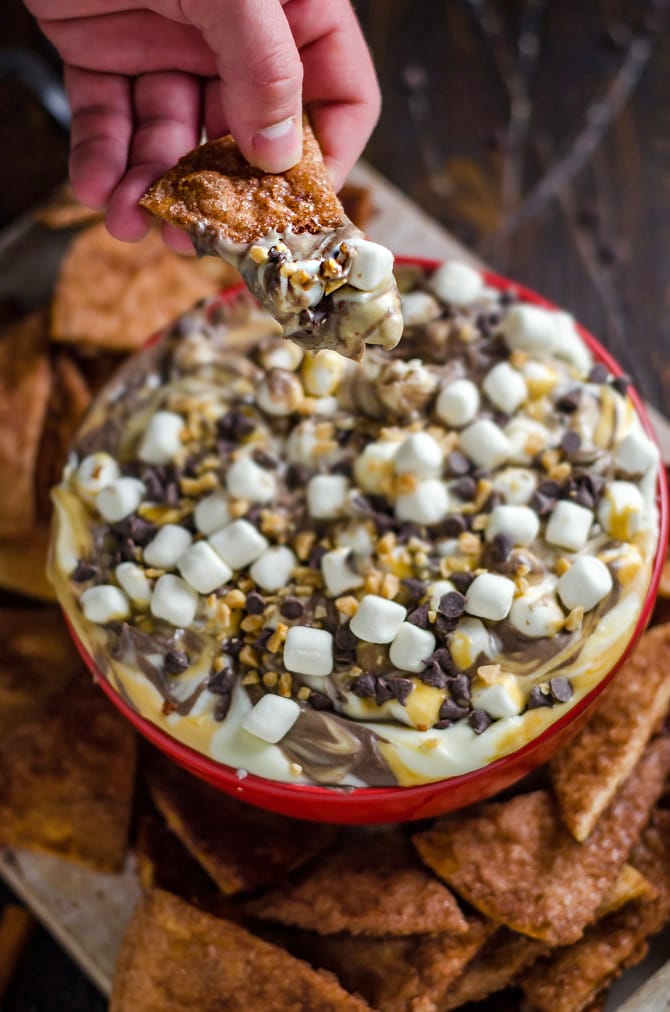 This Salted Caramel S’more Dip is a great option for a regular family dessert, but it works even better for parties– in fact, you may want to scale the recipe up a bit if you’re planning to bring it for a crowd because people are going to DIG. IN.

I’m speaking from experience here. When I took these photos, I had doubled up the recipe because we were having friends over. And next thing I knew, it was all gone.

Make the Salted Caramel S’more Dip with Cinnamon Chips yourself and you’ll know exactly why it went so quickly. After this, I’m thinking I should listen to James and not wait so damn long to make dessert again! 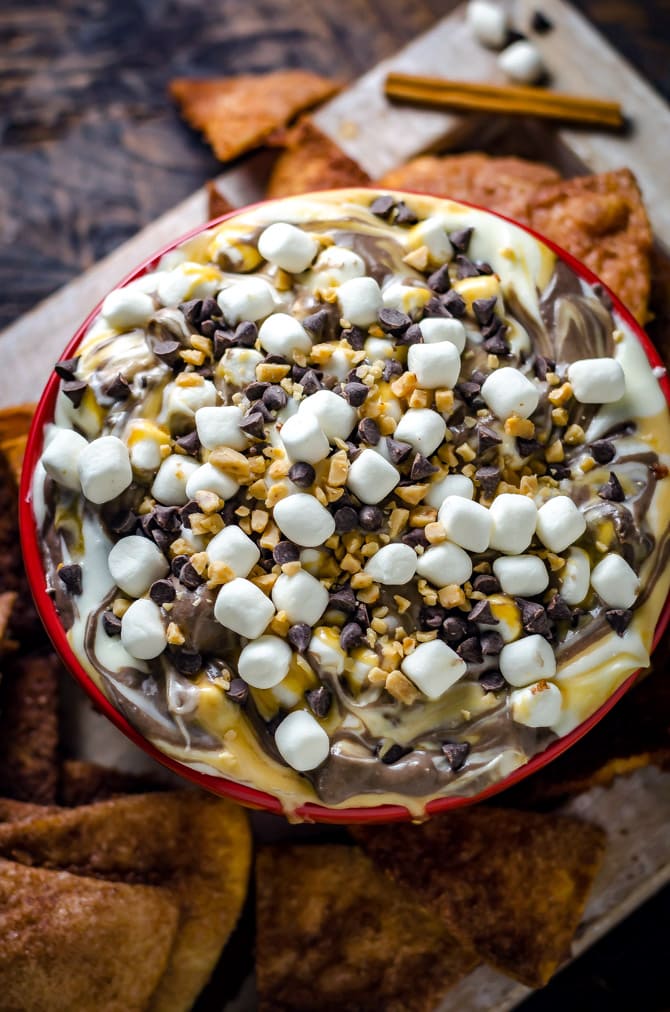 For the Cinnamon Sugar Chips:

For the Salted Caramel S’more Dip:

This dip also goes great with graham crackers and fruit such as strawberries!

I doubled this recipe for a party (as photographed here) so if you’re planning to entertain a large group, I recommend scaling up.