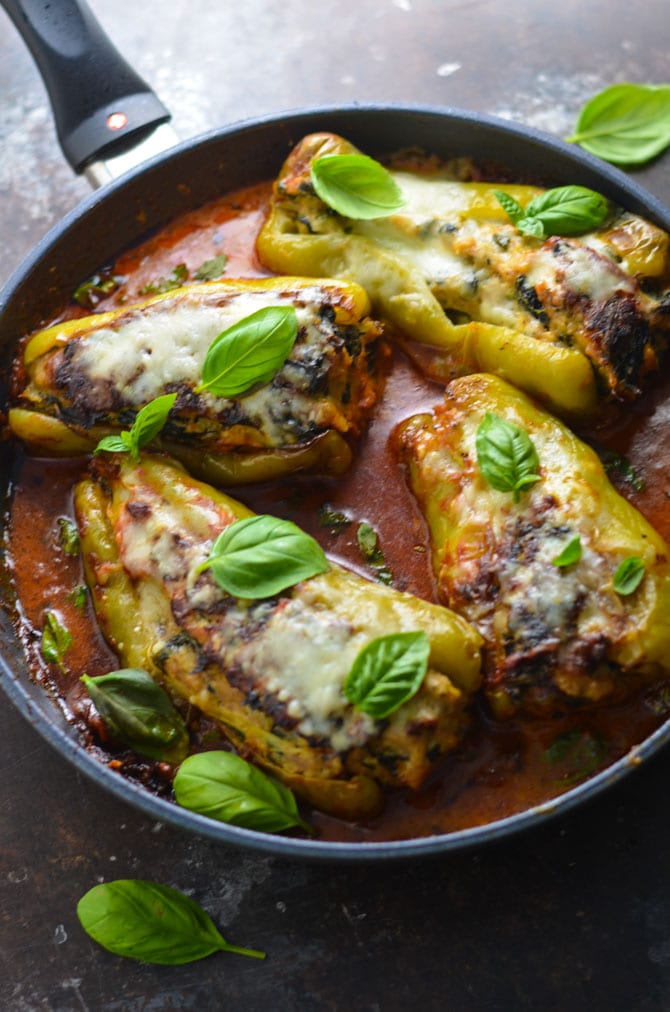 There’s something about stuffed peppers that always feels like the cozy, tuck-you-in type of comfort food to me.

They’re also the kind of comfort food that I tend to avoid in the warmer months because most recipes require turning on the oven. When it feels like an oven outside, I try not to use the oven inside, you know? So when the craving for stuffed peppers hit me this week, I decided to try out a stove-top version instead. 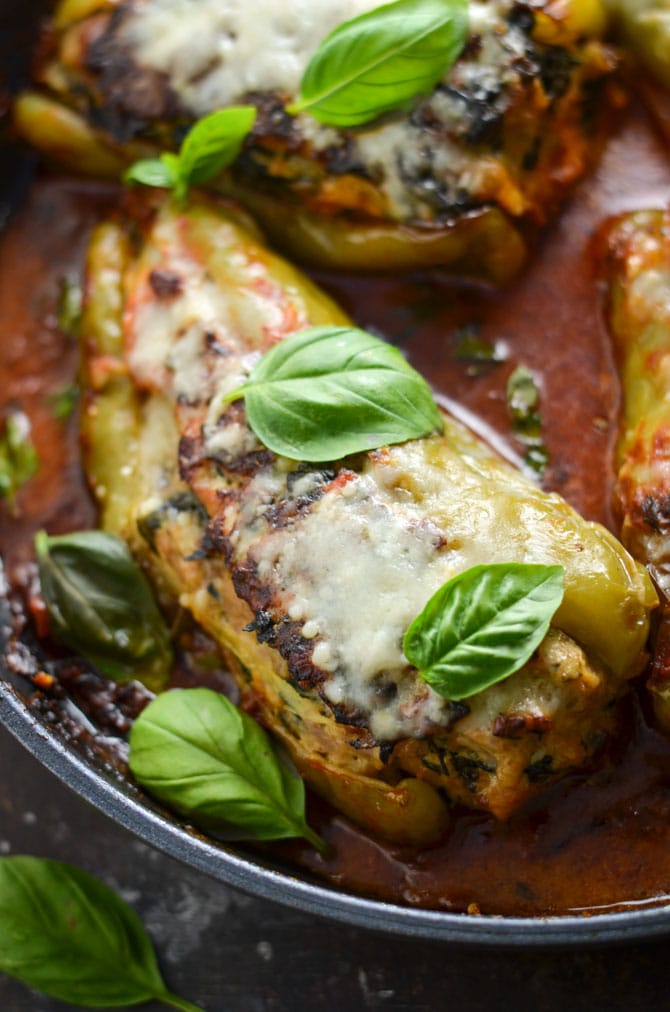 I’m really not sure why I never thought to make stuffed peppers entirely in a skillet before. These Saucy Skillet Chicken Sausage and Spinach Stuffed Peppers become perfectly tender on the outside, stay moist and flavorful on the inside, and cook in a super easy to make tomato-basil sauce, all in one pan. That’s so much simpler than most stuffed pepper recipes, which call for sauteing this, browning that, assembling, baking, and then washing a ton of dishes, right? And of course to top it all off, my kitchen stays nice and cool without that oven cranked up to 400 degrees.

Instead of using bell peppers for this recipe, I decided to go with cubanelles– AKA Italian frying peppers. As the name suggests, these peppers are popular in Cuba, but they actually have Italian roots and are used in many Italian recipes as well. The peppers are mild and sweet, much like bell peppers, but the walls of the pepper are much thinner, so they wind up almost melting into the filling as the soften up in the skillet. 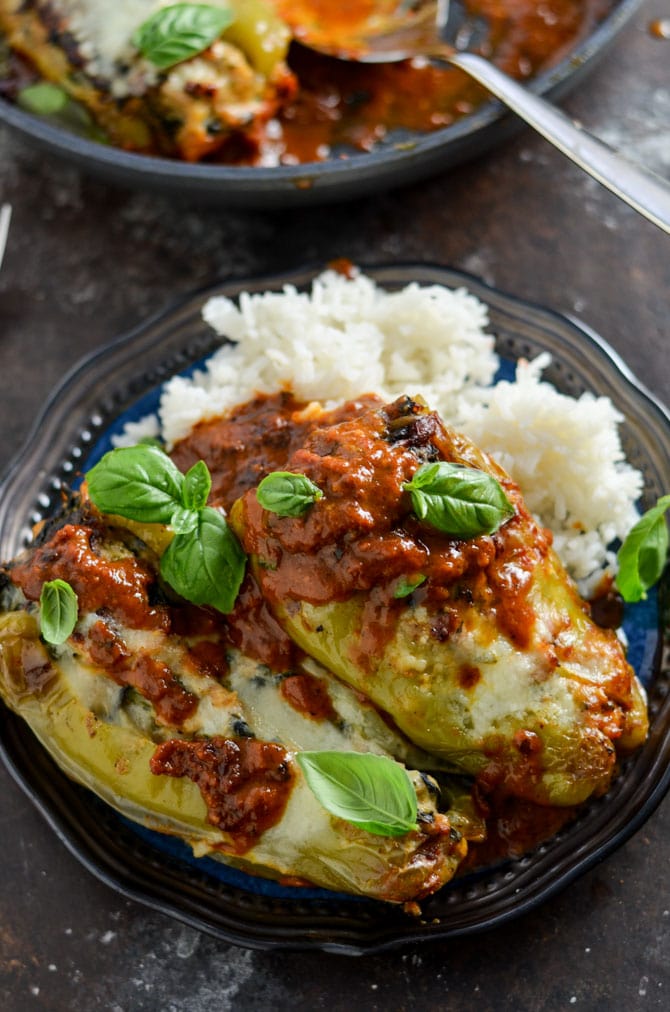 Despite my love for Cuban food, I like to go the Italian route with my cubanelle peppers, so I stuff them with Italian chicken sausage, spinach, parmesan and mozzarella cheeses, and breadcrumbs. I cook rice on the side to serve the peppers and sauce with, but pasta would be a tasty alternative, too. After all, the filling is very similar to super juicy meatballs! 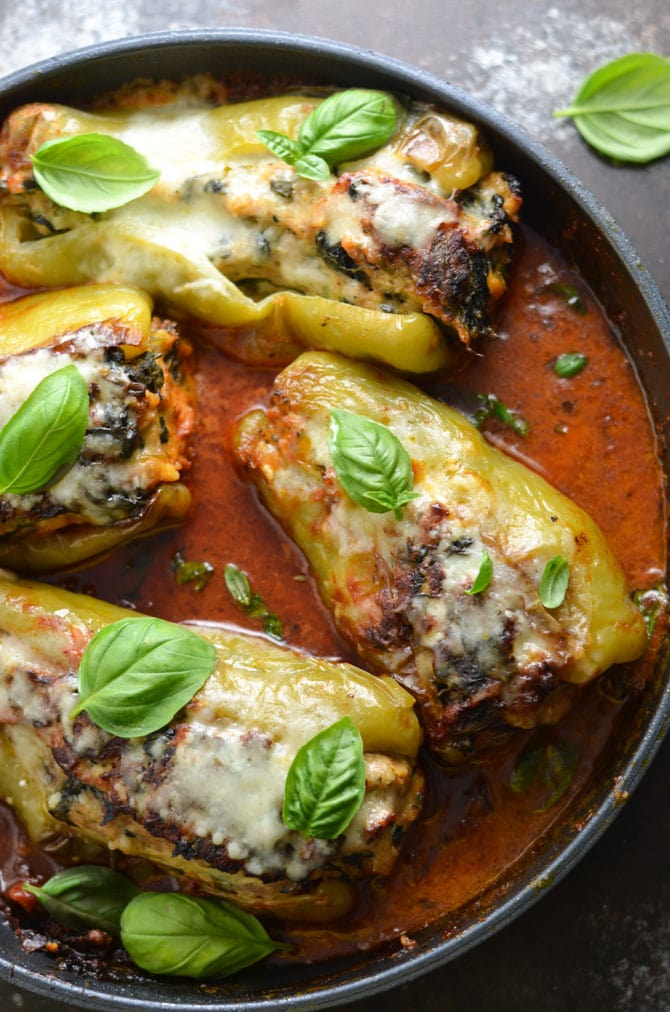 Chicken sausage can tend to taste a bit dry after cooking, so I sneak as much moisture in as possible by soaking the breadcrumbs in milk before mixing together the filling. It might sound weird, but trust me, if you start using milk-soaked breadcrumbs in your meatballs and meatloaves from here on out, you’ll see a world of a difference.

And since I already have the milk out, I like to add just a little to my sauce at the end. It gives it just a tiny bit of creaminess. That sauce + that filling + those peppers = perfection. Yes, even in the summer.

Try the Saucy Skillet Chicken Sausage and Spinach Stuffed Peppers for yourself, and when you do, don’t forget to take a photo and tag #hostthetoast on Instagram or Twitter. I can’t wait to see yours.