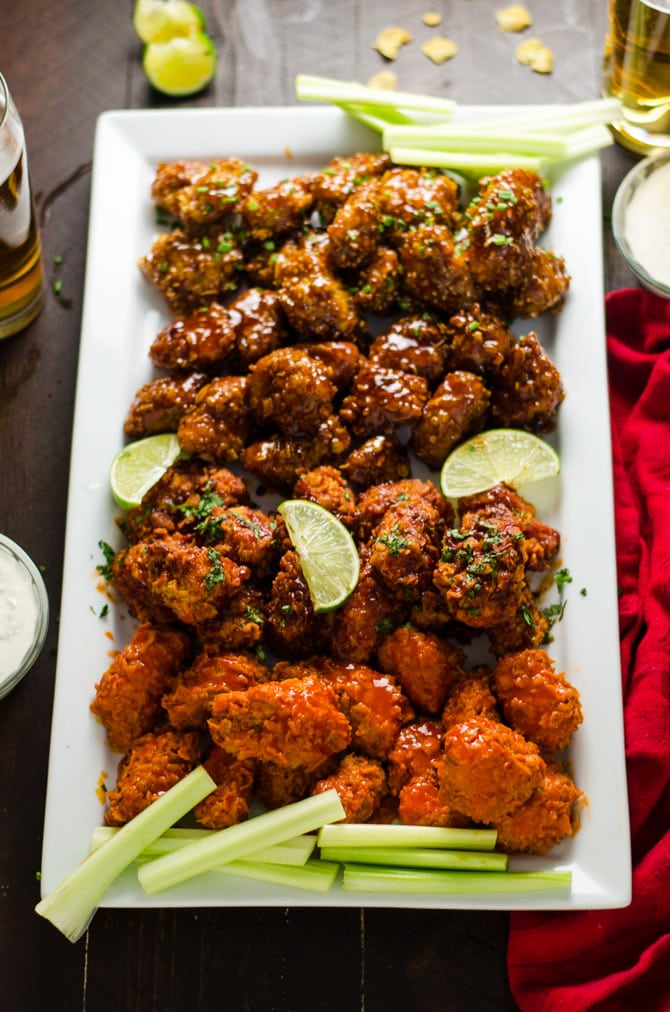 With the Super Bowl just around the corner, I’ve been craving one thing for weeks: wings. Or more accurately, boneless wings, which aren’t really chicken wings at all– they’re chunks of chicken breast which are prepared in the traditional wing fashion. That is to say that they’re crispy and coated with flavorful sauce, but with less mess and non-edible parts. Three cheers for having no bones and cartilage to clean up.

Naturally, I did what I always do when I get a craving, and decided to make some myself. However, just as I was about to heat up a big vat of oil, I had a change of heart. What if, instead of making traditional, fried boneless wings, I tried to make some oven-baked boneless wings that were still crunchy… and juicy… and Super Bowl worthy? Sign me up. 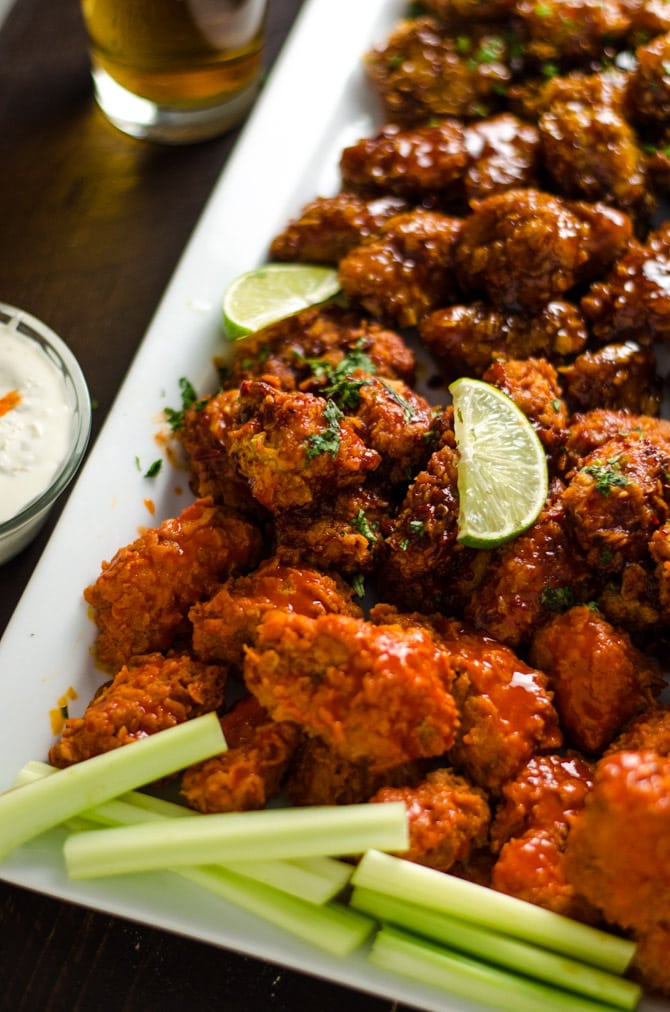 You might remember that a couple of years back, I started making baked, bone-in wings using the baking powder technique, which dries out and crisps the actual skins of the chicken wings. This time, that wouldn’t work, though. Boneless wings don’t have any skin attached. Instead, I’d have to figure out a coating that mimicked the texture of fried batter without requiring the frying step. And the answer was in the pantry all along– a box of cornflakes.

This isn’t a new technique, and it certainly isn’t originally mine, though I’m not sure who is owed credit for inventing it. For years now, I’ve been seeing the idea to use cornflakes to crust baked chicken. But honestly, I was never sold on the idea until recently. I’d figured it would taste, well, like cornflakes. 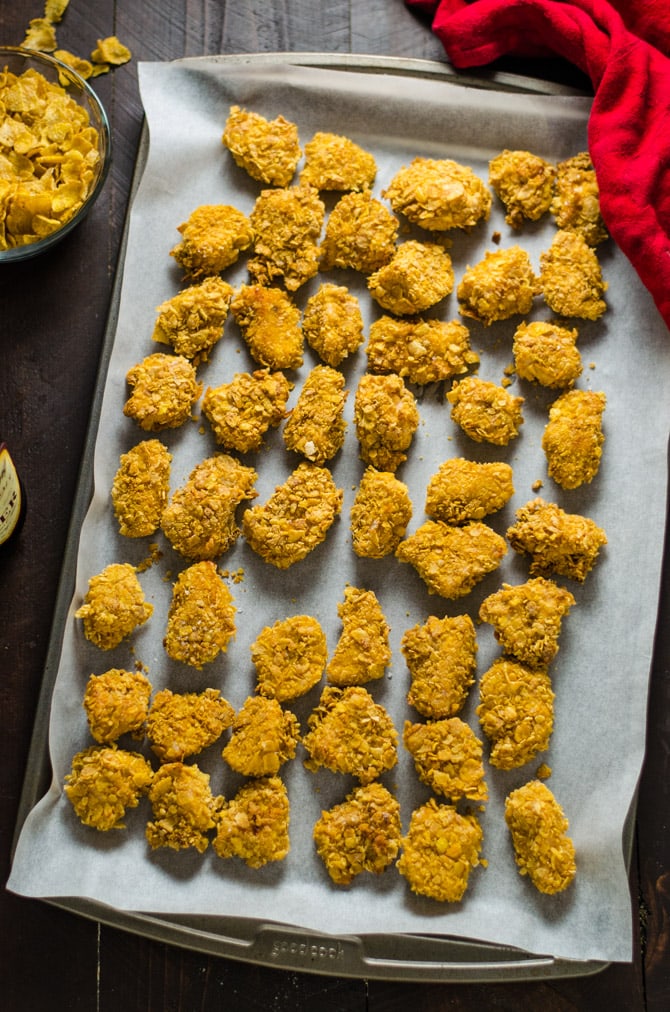 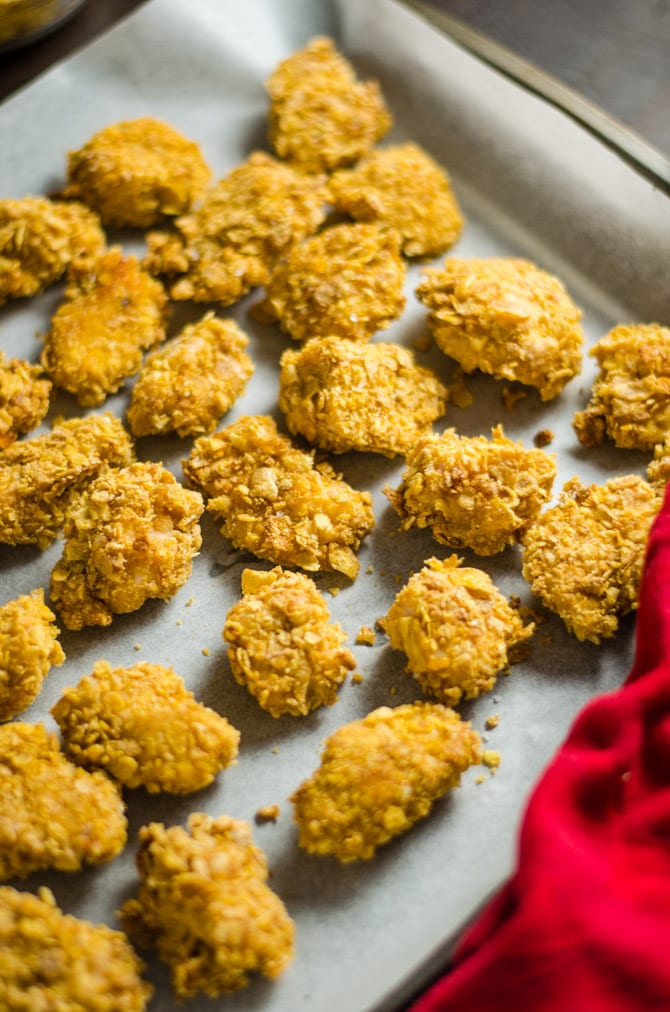 Surprisingly, it actually makes a convincingly crunchy coat, and when layered over well-seasoned flour, tastes pretty delicious. You know what makes it all taste even better, though?

Oh, and I can’t forget the Asian-inspired Orange Glaze.

Because why have one when you can have Baked Boneless Wings 4 Ways? 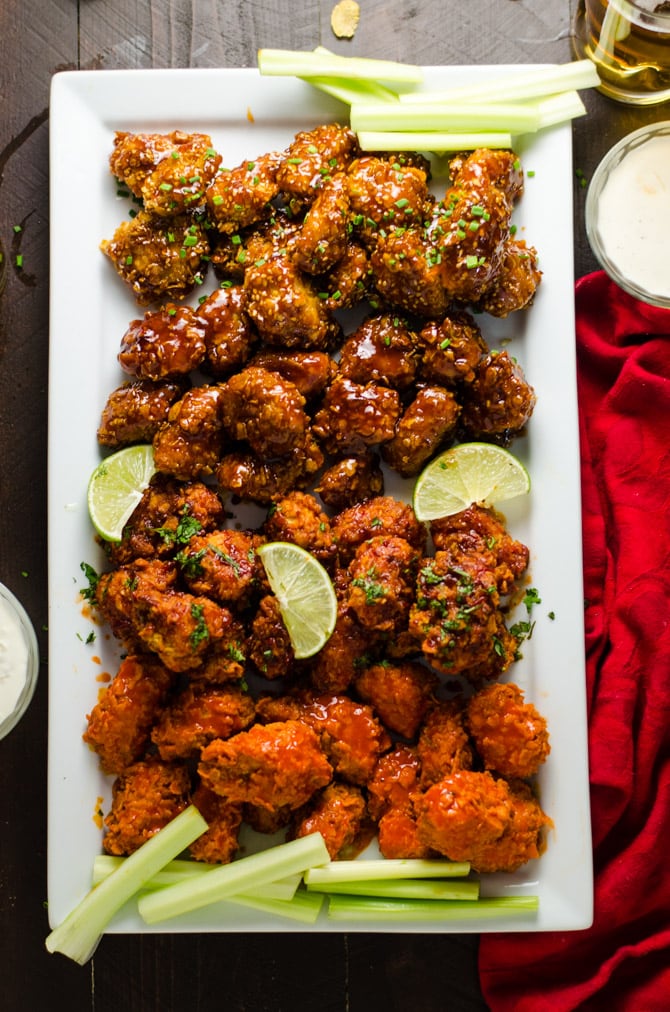 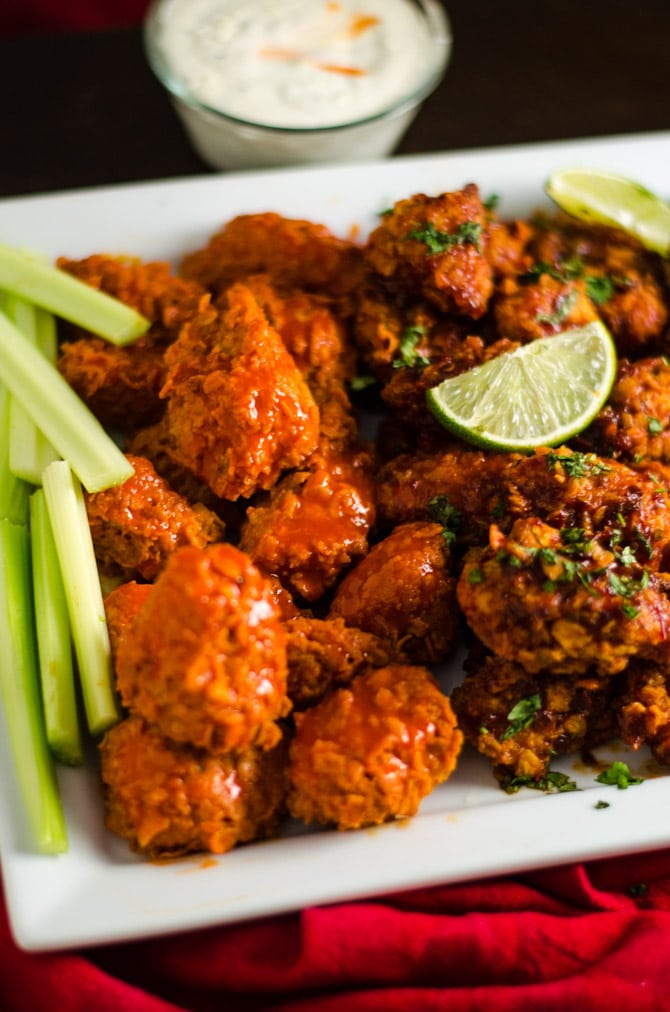 Each of the sauces is incredibly easy to whip up, requiring just a few minutes and ingredients. This way, you can make a whole platter of the wings with all four sauces for your next party or your football Sunday enjoyment. Or you can always pick a a favorite sauce and quadruple it– the world is your oyster. No, the world is your naked baked boneless chicken wing.

Don’t believe that the sauces are super simple? Check out exactly how I make them in this quick video below.

See? By the way, you might have noticed that I’m giving this whole video thing a go. If you like the videos, let me know and I’ll try my darnedest to make more. You also can subscribe to the Host the Toast youtube channel!

And if you’re like, “Lady stick to photography,” that’s cool too. Honest feedback is good feedback. We’re all friends here. 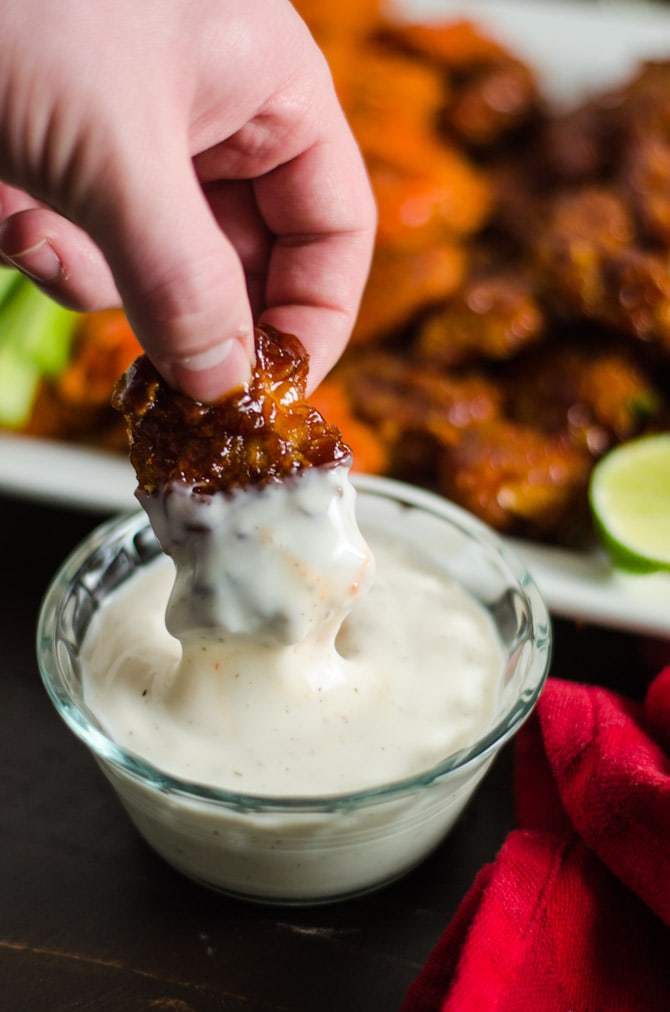 But enough about ME and more about YOU and how YOU are going to love these saucy, sticky, flavor-packed boneless wings. If the people at your house are anything like the guys at mine, these things are going to be devoured.

That would be a great experiment right? Timing how long they last once you make them? Okay you don’t really have to do all that, but don’t forget to at least take a picture of your Baked Boneless Buffalo Wings and tag it on Instagram with #hostthetoast. Let me know in the caption which sauce is your favorite! Will it be Buffalo, Honey Bourbon BBQ, Smoky Chipotle-Lime, or Orange Glaze? I can’t wait to see. 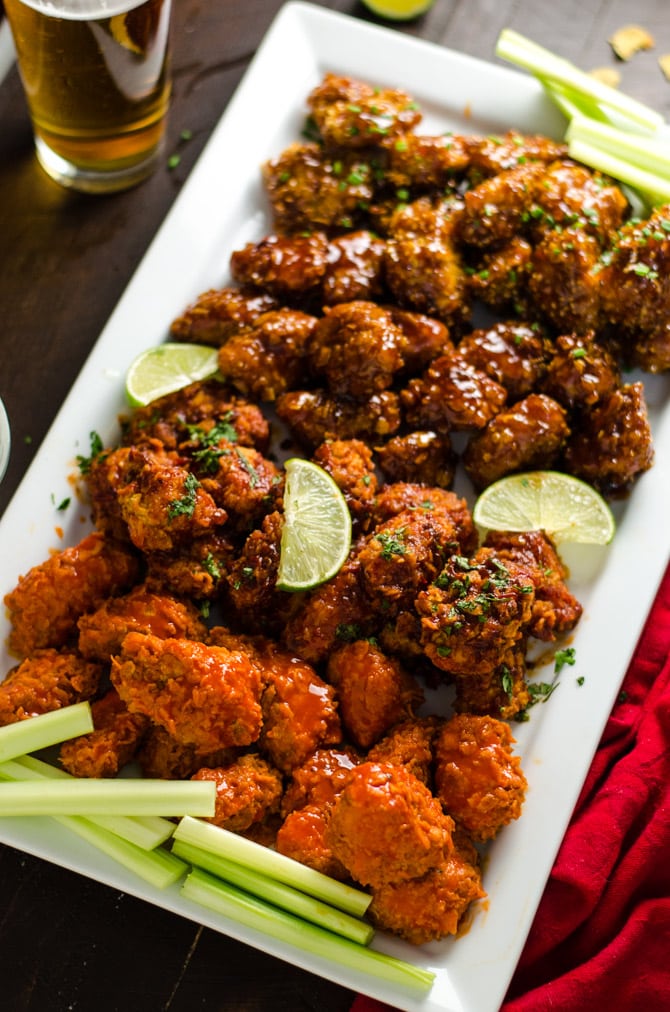 For the Baked Boneless Wings:

For the Buffalo Sauce:

For the Smoky Chipotle-Lime Sauce:

For the Honey Bourbon BBQ:

For the Orange Glaze:

To partially make these ahead, bake the popcorn chicken, freeze, and bake from frozen in a 350°F oven until warm, about 20 minutes. Then continue to make the sauces.